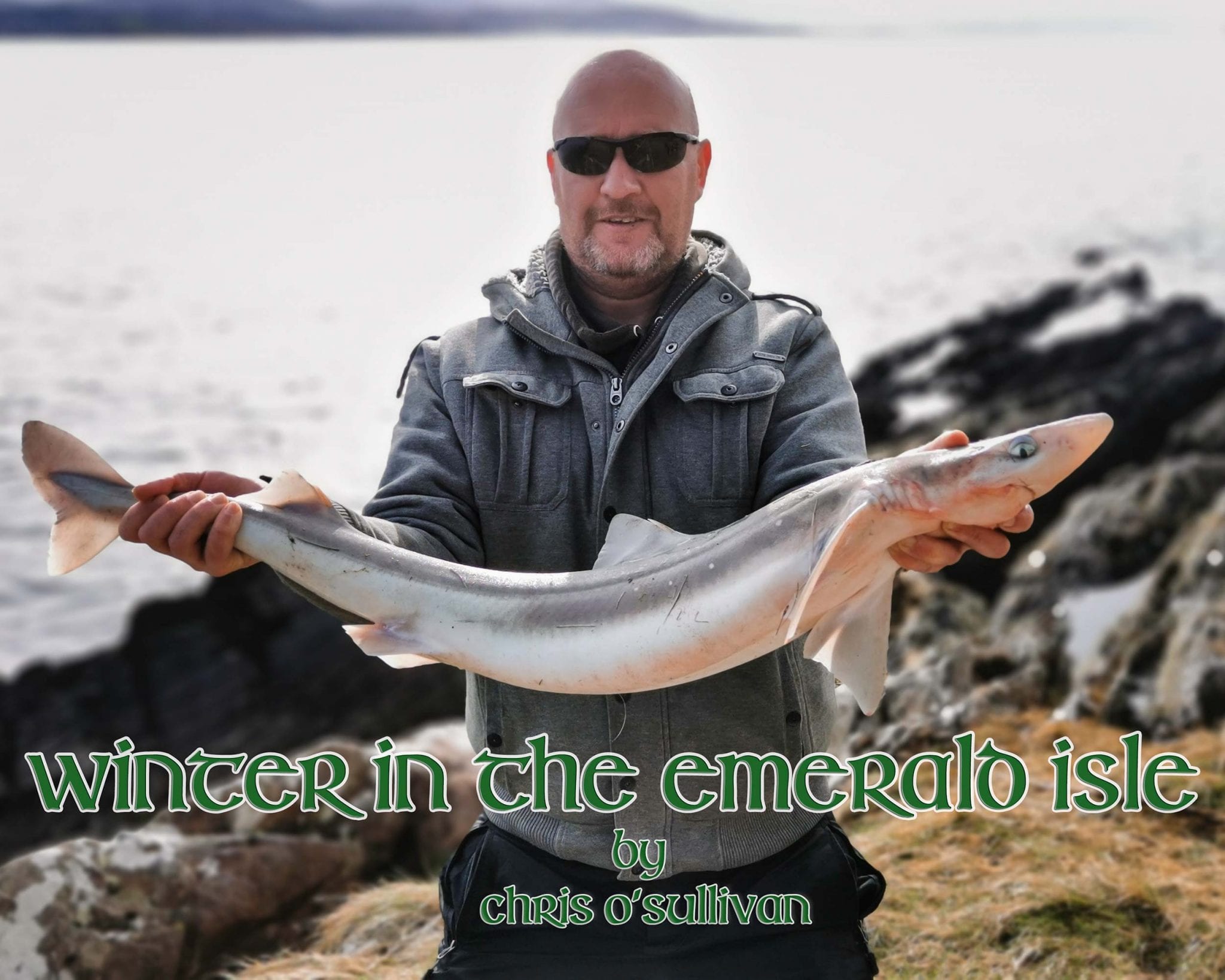 Winter is a seriously exciting season for some anglers, bringing a bonanza of fantastic fishing to shores all over Europe. Unfortunately for me, there is very little bonanza in my area during the colder months. Instead we have such wonders as small whiting, five bearded rockling and dabs to look forward to. Thankfully, by the end of February some of the bigger fish start to arrive again. It’s not straightforward seeking them out – the missions require some driving – but if properly motivated, then the rewards are there to be had.

The major roadblock at this time of the year is the weather. It can’t possibly be news to anyone that the weather has been atrocious so far in 2020 – indeed, as I write this, storm Jorge is attempting to rip the tiles from the roof of my house. This is when familiarity with the weather forecast becomes critical in order to plan a safe trip. Too many times in the past I’ve pinned my hopes on the TV forecast only to be let down by it being totally wrong or all hell breaking loose sooner than the weatherman had told me it would. Fortunately, the various weather and swell apps now make life easier and the more practice you get at using them, the better you get at catching the best conditions for fishing in your area. 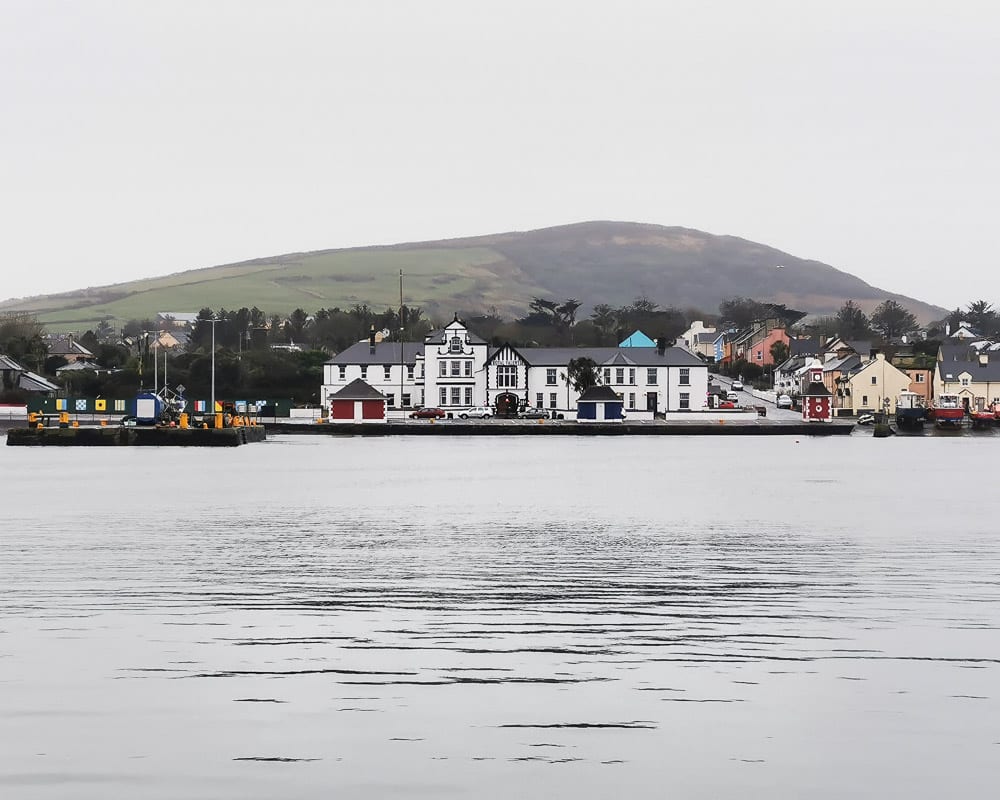 After four named storms already this year (and plenty of wannabes), I was glad to see that there was a weather window that might allow a few fishable hours outside of work time. I had a new fishing partner for this one, my wife decided to come on the adventure, so I packed the car and we headed for Knightstown on Valentia Island in search of bull huss and hopefully less wind and rain. Baits would be simple: mackerel, squid and large sandeel. You don’t need anything fancy rig-wise here either, a pulley rig with 40lb snood to handle the teeth of the huss and a 2/0 or 3/0 strong pattern hook will do.

Things started out well, on the weather side at least, there was little to no wind and rain and the conditions seemed ideal. It didn’t take long at all for the huss to play ball either, with the first cast producing a 10lb fish of over 100cm. Alas, this is not how the session continued, with a plague of dogfish promptly descending on us and destroying the most carefully prepared bait cocktails. After two hours of the dogfish, both us and the weather had had enough. The wind picked up from the west and brought with it heavy rain showers and an end to the short session. We retreated to the Royal Hotel in the village to warm up and plot the next adventure. It looked as if there would be another window a few days later so plans were hatched and targets agreed upon. I’m not 100% sure that the wife was committed but as far as future fishing prospects were concerned, there was a lifeline. 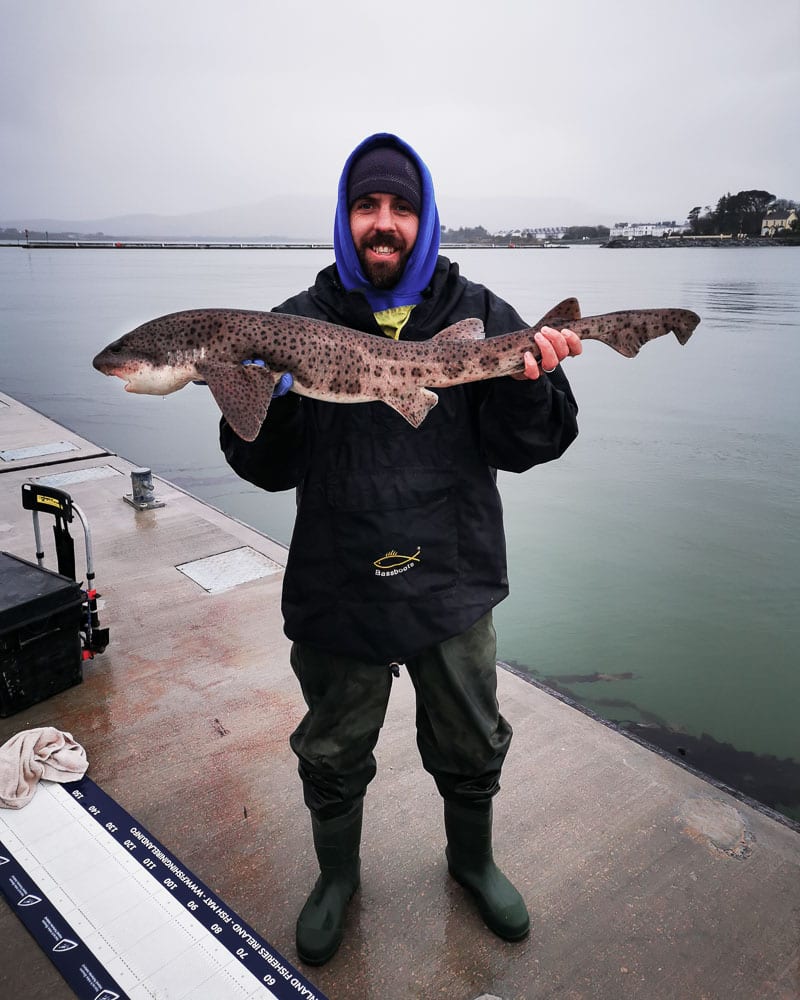 When I got a text from the local lads a couple of days later saying that they would be going for a shot at the spurdog and had a spare seat, I couldn’t resist taking up the offer. I think the wife was happy to be off the hook for this one too. The weather window lent itself to daytime fishing so plenty of bait was packed and rigs made. We set off for the border of the Beara peninsula nice and early to ensure we were first to the small mark we wanted to fish. Sadly though, we were not the only ones with this idea. Specimen hunter Steven O’Neill from Cork had gotten there before us, although there was still room thankfully. Irish international Alan O’Dowling was next to arrive, thinking he would have the mark to himself also. When Martin and Leonard arrived the mark was at capacity but to be fair to everyone, there was no cribbing or complaints, even when Leonard was casting slightly askew.

The set up for these toothy fish can be as complex or simple as you wish. I prefer a simple pulley rig with a wire bite trace down to a 2/0 hook. Rather embarrassingly for someone with so much fishing gear, I was undone by humble crimps and had to borrow some from James. Before I had even cast out Steven was into a fish and he soon landed a small thornie to ensure there would be no blank for him. James was next up, landing a slightly bigger thornback on his Akios AirTorque.

The sun was high in the sky as the last of the ebb brought me my first bite, the line dropping slightly slack. I wasn’t convinced it was a fish at first as we had the company of a couple of oyster dredgers working just within casting range. I suspected I hadn’t tightened up my line sufficiently after the last pass. When I did tighten up though, there was a most welcome little knock in reply. I said nothing but loosened the drag and didn’t stray too far from the rod. James and I had discussed where to try and land a decent fish on the rocks and it was a good job we did. An odd ‘tap tap’ on the tip told me I had managed to hook either a small ray or a doggie – I couldn’t have been more wrong. 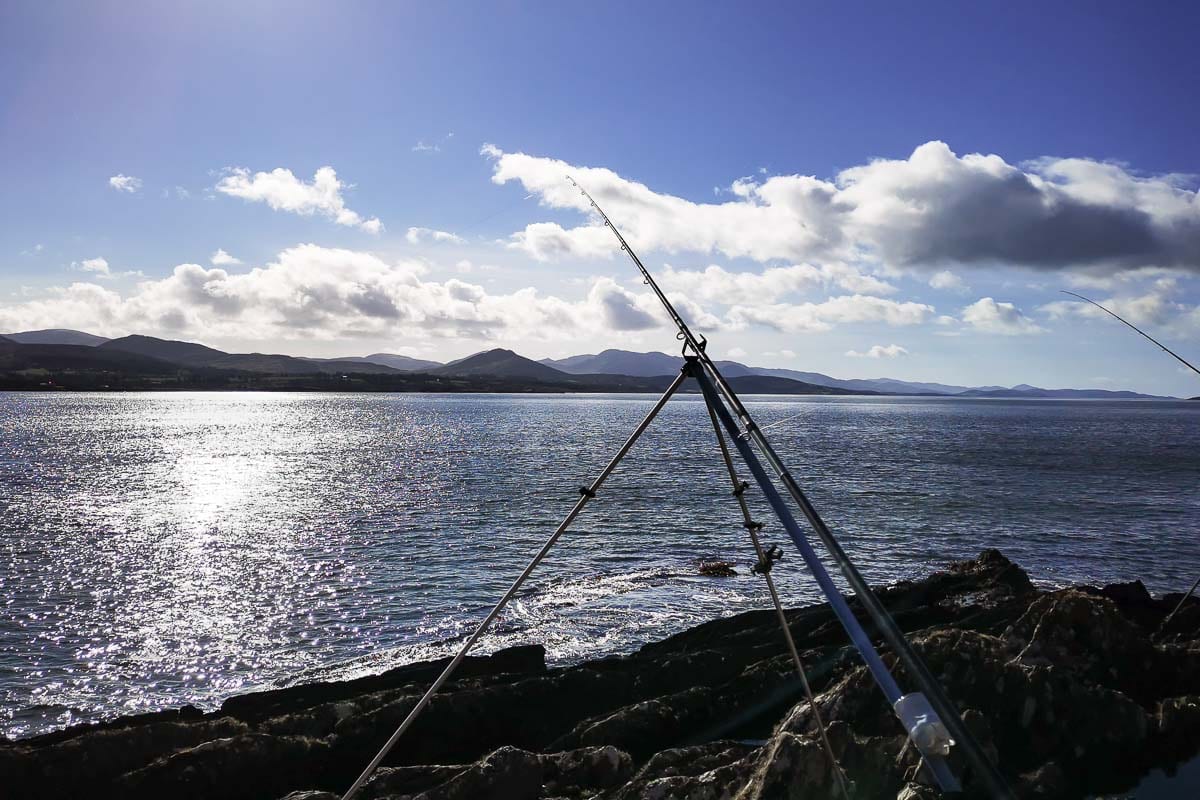 As I lifted into the fish I could immediately tell there was plenty of weight and no shortage of determination on the other end. The fish stayed deep and went with the last of the ebb tide while I kept the rod high and the pressure on to avoid the snags closer in. Then it ran towards me, prompting me to reel frantically to close the gap until I felt contact again. The fish surfaced about 40 yards out and a chorus of approval rippled along the bank at the sight of a decent spurdog. While I stayed up high to keep the line away from the exposed sharp rocks, James made his way down to the water’s edge and expertly tailed the spur. The new length for a specimen spurdog here in Ireland is 105cm and this fish looked mighty close to that. Steven and Alan are noted specimen hunters and had the measure out almost before the fish hit the bank: 101cm – agonisingly close but no cigar. The spur weighed in at 10.9lb, nothing to be scoffed at and I have to admit I was smiling ear to ear.

The expected spurdog onslaught was again interrupted by the oyster boats passing by with their dredger methodically working the sea floor. Low water brought on a dead spell with not even the crabs interested in our baits and it wasn’t until an hour into the flood that Steven’s rod tip rattled. He waited patiently before eventually lifting into what seemed like a good sized fish. Unfortunately, around halfway in and after some heavy head thumping the worst happened and the line dropped slack. The fish had made it to the safety of the rocks and cut the mainline on the reef. Again, we were all revitalised but the return of the dredger made things frustrating.

Approximately an hour later and with lads starting to think of home and the fireplace, Steven’s rod again slammed over, line peeled from his multiplier and it was obvious that a better fish had grabbed the bait. With the tide running faster now, the fish tried to stay low but Steven was having none of it and kept the pressure on to get the fish high and clear of the snags. Again, this spur surfaced well out from the rocks and it was clearly another 10lb+ specimen. In order to repay karma for my good fortune earlier, I descended the rocks to the water’s edge as Steven guided the fish my way. 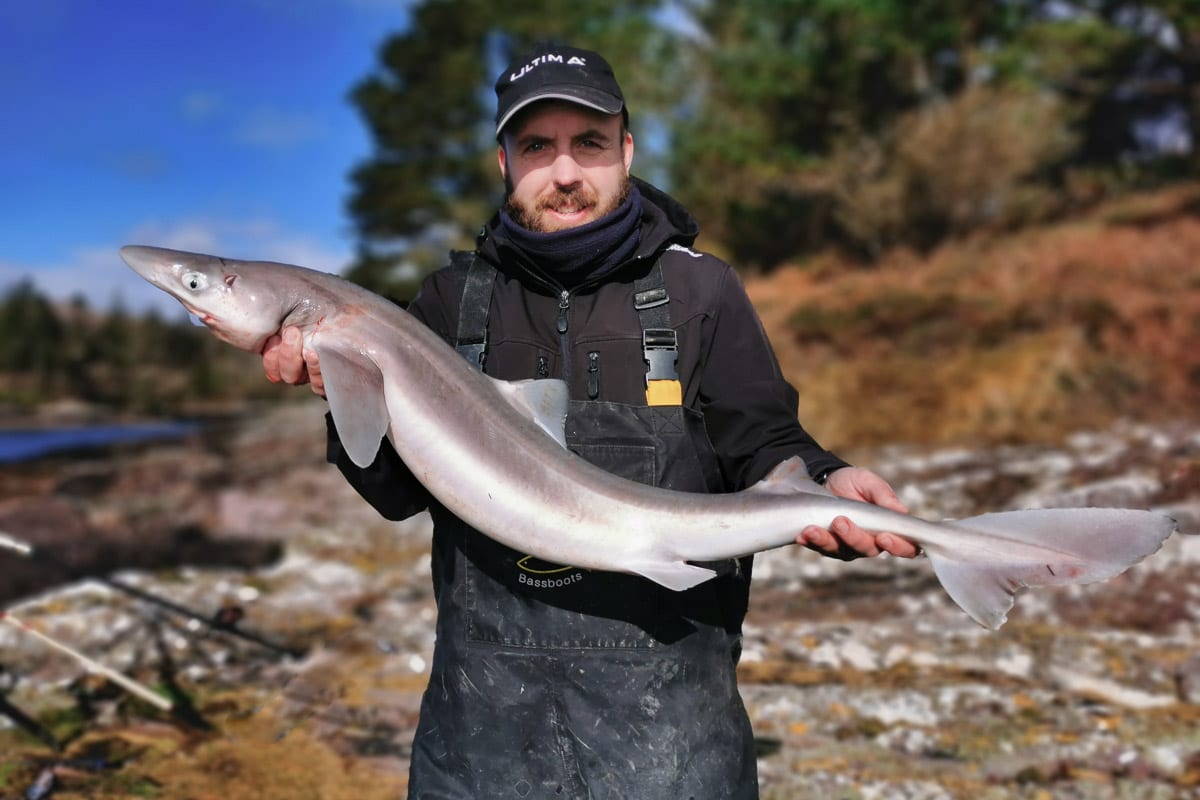 Following James’ lead, I managed to tail the fish and I immediately knew it was heavier than mine. Holding the fish in two hands to keep it level, I made my way back up the rocks closely watching the teeth and spurs to avoid injury. What I didn’t count on, however, was the powerful fish spinning in my hands. Just as I reached the top of the back the spur managed to twist in my grip and catch me across the back of the hand with its sandpaper-like skin. Words not fit for print were used and blood began to drip. Steven and Alan were waiting and the fish was measured immediately, recording a length of 106cm and qualifying as an Irish specimen. The photos were taken and Steven had the fish returned in a matter of minutes. This was a personal milestone for Steven as it was his twentieth specimen species and his fiftieth in total. Quite an achievement.

Although we fished for another two hours the fish didn’t play ball. We packed up and embarked on the long walk back to the car, only to be greeted by a text from Alan when we finally arrived – ‘2 X 6lb’ was all it said. A quick call later that evening confirmed that he had indeed landed two spurdogs in quick succession, then fished on for another two fruitless hours hoping for more. Such is fishing. As we arrived back at home the weather window snapped shut behind us and the wind and rain began again in earnest. Although there were rays and spurs caught, I couldn’t help but feel that the constant activity from the oyster dredgers was the main factor in the day not being a bigger success. In hindsight though, it was great to manage two 10lb fish in a week that saw most people struggling to walk the dog. Roll on spring is what I say! 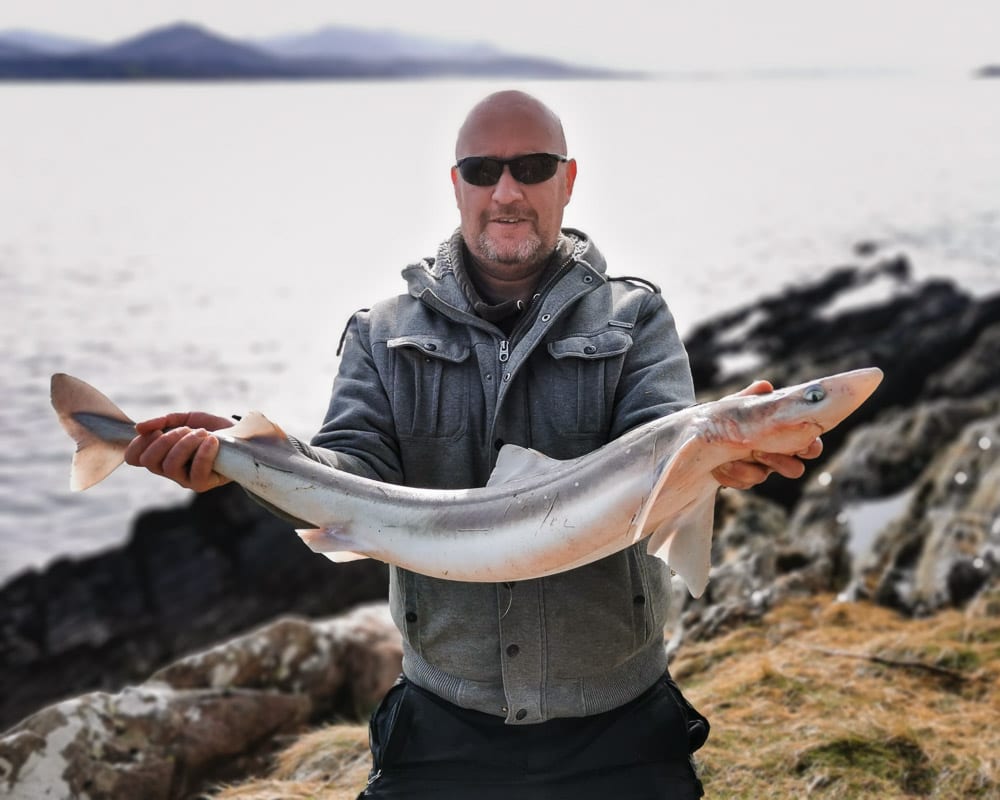 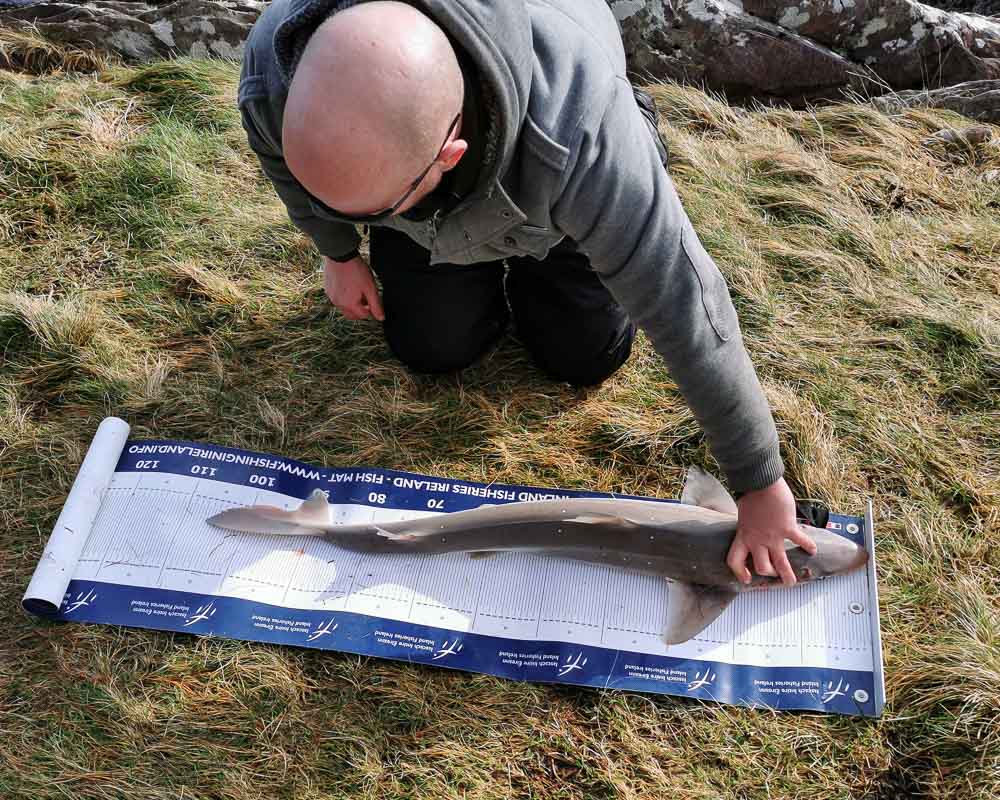