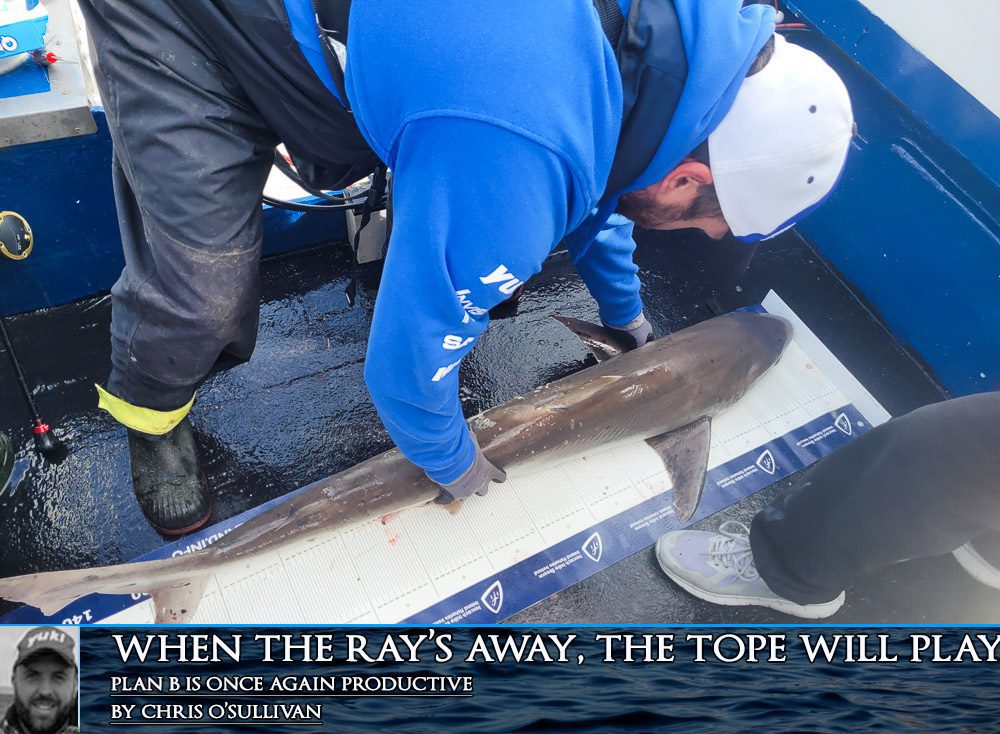 For those who have read more than one or two pieces by myself within these pages, or the digital incarnation, you might of gathered by now that my plans change rapidly and occasionally they even work out for the better. Previously, I was lucky enough to meet up with Darren Ryan for a belting day on the rays. That trip came about from a very last minute decision to head out and this month was no different. Originally, a day on the shore was planned with Finn Healy. However, a rapidly changing forecast meant that a day on the boat, in the bay, chasing undulate ray was on the cards.

Having chatted about it on Facebook and with Finn having a mates birthday to attend the prior evening, I hedged my bets and gave Alan Horgan a quick message to see if he fancied coming along, as knowing that these birthdays can often leave lads of Finn’s age too sickly for the boat, I thought it wise to get another crew member. Lo and behold Finn was actually up on time and my father Connie was even able to join us so we all headed for Fenit really excited for the day afloat.

The game plan for the day was a relatively simple one. Around low we would try to feather for a few mackerel or launce then head east and up the bay to target the smooth-hound, undulate and big stingers. After fuelling the boat, we headed out of the marina and around the head of the pier to be greeted by calm seas and slightly overcast skies. Everything was in our favour as we dropped down the feathers.

Naturally, the mackerel didn’t play ball. When do they when you actually require a few? So we downscaled the Sabiki rigs to pick up the small sprats on the bottom. With a small bucket of these smaller bait fish we decided to try a few drifts around the lighthouse where we had experienced some success the previous week.

Immediately, Finn was into a full string of fine large mackerel. Alan and Connie followed suit. I even managed to pick up a few of them myself. Result! You can’t beat a freshly caught mackerel for the species we had an interest in. Instead of staying put to bag up on more mackerel than we required, content with our catch being a suitable bait stock for the day we headed into the bay to chase the hounds and rays.

Unfortunately, the tide had picked up now and we began to drag the anchor meaning we weren’t able to stay on the spot that I had planned to fish. After a few resets and some spider crab we made the call to try a plan B.

Thankfully, the new spot was a dream to anchor up in and within 10 mins we were all fishing. The new area would be a popular spot for rays and a variety of the smaller species. Connie decided to use a small fresh mackerel bait, Finn a whole squid bait, Alan a large mackerel fillet and I went with a fresh peeler bait in the hopes of a big hound. We didn’t have to wait long as Connie’s rod doubled over and started to head down tide. It was unmistakably a tope run. With only a ray trace on, we expected the bite off immediately but, it wasn’t the case. After numerous runs and a rise to the surface the inevitable bite off did come!

This sent the boat into an excited frenzy. A quick rummage through the boat box and I found exactly what I wanted. Mike Sherwood, who makes the ‘Offshore Angler’ big game rigs had sent me a care package of wire bite traces onto 8/0 circles. A quick change up and Connie was back in the game with a fresh mackerel fillet. I followed suit and all of a sudden we were in full tope mode. My rod screamed off and stopped abruptly. As I picked it up the run restarted and I have to admit to getting pretty excited as the tope ducked and dived. Using a 12/20lb class Shimano rod I had picked up second hand and a Daiwa sealine-x that must be approaching 20 years of service I  felt every surge.

After a few more runs, and maybe a bit of stalling on my part, the net was readied by Alan and expertly captured. Finn grabbed the measure mat and it went to 149cm with a specimen being 155cm, so not far off. There were a couple of quick pictures but they were cut short by Alan’s drag struggling, then his rod shot across the boat before he grabbed it! With some adjustment, he evened the playing field and despite several runs Alan had it tamed in no time. Another big angry male approaching 30lb was boated, unhooked and released. Connie was next up and I was praying that my hastily tied shock leader would hold and thankfully it did. Another tope to 25lb and now there was great hope that Finn would make it a full house but, it wasn’t to be. Twice his rod screamed off, but stopped when the tope mouthed his bait and dropped it.

To make things worse, the wind had really picked up and a very ominous black cloud had begun to envelope the last hint of brightness in the sky. We toughened it out for a few showers but as the worst of the sky approached, Finn himself made the call to throw in the towel and head back to port. To be fair it was the right call and it wasn’t worth the safety risks to stay on for a tope no matter how much fun they were. After a bit of convincing we had the anchor up and we were heading home. It was a good thing too as no sooner had we got tied up in the marina, the heavens opened sending us running for the car.

In all, we had six runs and three fine tope landed. Add to that over twenty mackerel and it turned out to be a good day at sea. Considering that our main plan fell apart, it was brilliant to get a result from plan B showing how important it is to have a back up plan in place. This definitely isn’t the last of the adventures, so hopefully the weather for the summer pays attention and lets us out again.