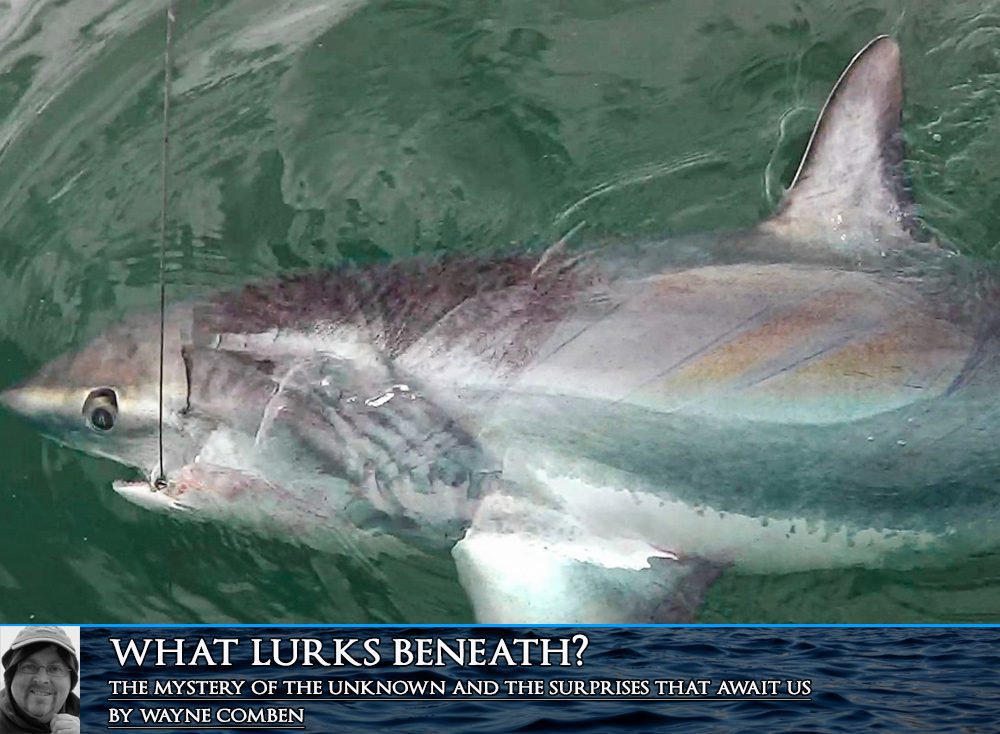 One of the main pulls of fishing the open ocean is the unknown anticipation of what might actually take your bait. Unlike a lake or pond, the sea has few boundaries and, with an ever warming ocean temperature, the possibilities for anglers are as intriguing as they are thrilling. Over the centuries U.K. waters have seen many unusual species, some have been washed up dead or dying, but many have been fighting fit.

At the time of writing, giant bluefin tuna are visiting our shores in ever increasing numbers. This is in no way a new phenomenon as there was once a strong fishery back in the 1930’s. So much so, that the British Tunny Club was founded in Scarborough in 1933, where the wealthy and famous at the time could indulge in some incredible sport. Whilst bluefin tuna may not be a rarity, swordfish certainly are.

In 2018, two fishermen in Bracklesham Bay on the south coast saw the incredible sight of a billfish swimming towards their boat. As it turned and moved away, one had the alertness to take out his phone and start filming whilst the other cast a lure in the direction of the fish. The first cast produced no response but at the second time of trying it was closely followed by a lit up sword… all caught on film! Whilst most sightings are of dead or near dead swordfish, there have been occasions where they have clearly been healthy and only last year one was filmed by a drone in Scottish waters.

You can see  the footage of the billfish spotted off the south of the UK below.

Some eight or so years back I was 15 miles out from Falmouth fishing aboard Graeme Pullen’s 17ft Wilson ‘High Seas Drifter’. We were drifting the forty fathom mark and had a slick and floats out fishing for blue shark. The day had been decent and we had tagged a dozen or so Blues to 120lb. The late August day was stunning with a glass flat glaze that reflected the blue sky like a polished mirror. I happened to look up when no more than 40ft from the boat a group of mackerel cleared the water, obviously being pursued. Calling to Graeme to look, we both saw the group of around thirty or so fish once more leap clear of the water. I had seen mackerel splatter on the surface many times, I had also seen the odd fish jump clear but, these were moving at pace and clearing the surface at speed!

At the third time of jumping, right on the tails of the last fish were two bright silver European barracuda. Graeme immediately identified them and they were so close to the boat that there could be no mistaking what they were. That evening we headed down to the docks for a meal and a well earned beer. Afterwards we walked along the wall and stopped to chat to a commercial boat that was unloading the days catch. At first the guys aboard were a little cagey but after realising we were anglers they opened up a little. Without giving too much away they told us that it was not unusual to get all manner of fish in the trawls that you would not usually associate with British waters. For whatever reason they would not elaborate on exactly what they had seen but their words were ‘you wouldn’t believe us if we told you’.

Recently, an angler fishing Chesil Beach put up a photo of a lionfish. These invasive and venomous fish have caused huge issues abroad and have moved from their native Indo-Pacific to the Caribbean, Mediterranean and more significantly the West Atlantic.  Admittedly, the fish in question looked in very poor condition indeed but, if the genuine capture is to be believed, it is still a notable and somewhat concerning sighting, especially when they have been described as one of the most aggressively invasive species on the planet.

On a more positive note, the U.K. has seen a boom in shark fishing in recent times with the first rod caught mako Shark in four decades. Since then, there have been at least four more taken with one being an extremely sizeable fish. In 2019 scientists spotted a hammerhead shark 100 miles from the Irish coast. There were unconfirmed reports of hammerheads over a century ago and very recently there was a report of a juvenile hammerhead taken near the Celtic Deeps.

Back in the winter of 2012 an angler fishing aboard a charter on a mark near the Nab Tower on the south coast caught a six gill shark of 27lb. Considering the enormous size that six gills grow to, this must have been a young fish which begs the question ‘where was it birthed?’. Six gill sharks are generally found in much deeper water than is found in that particular area.

Reading some of the old books, there has been at least three reports on shark fishing that really stuck in my mind. All three were separate incidents in different years but each was around the same area of the south coast and all gave an almost identical account. The anglers in question were shark fishing when their bait was taken and the line moved steadily away. Despite the pressure put on, which was as much as the 50 wide outfits allowed, these fish did not deviate, and sped away until either the line parted or the angler was spooled.

The reason this hit home to me was that I experienced an identical take in the very same area just a few seasons back. My whole Mackerel bait was gently taken and at first I believed it to be a tope messing about and swimming towards me. It was only when I loaded up that I realised this was something immensely heavy which then proceeded to turn into three knots of tide.  Swimming at a fair pace, and in spite of maxing out the drag as much as I dared, this fish did not slow up, deviate or change direction for a full twenty minutes. Considering I was using an outfit comprising of a 50\80 stand up stick and 6\0 Everol attached via a chest harness, I put a huge amount on this fish. I have been fortunate enough to catch numerous large sharks including thresher and porbeagle estimated at over 500lb apiece and none could withstand anything like the sort of pressure I applied. After twenty minutes the first head shake threw the hook. I have often speculated as to what it was and I feel the most likely candidate would be an immense thresher. When you think they have been caught in commercial netting to over a 1000lb in the U.K. it is a viable call.

This leads us to the holy grail of fish yet to be confirmed in U.K. waters, the great white shark. Despite creditable sightings down the years, the fact is that no great white has ever been accurately documented off our shores. The closest was a female fish caught in the Bay of Biscay in the late 1970’s. When you consider this is only 170 odd miles off Lands End, the probability of one reaching us is not as far fetched as some would have us imagine. In 2014 a tagged shark named ‘Lydia’  became the first great white to be accurately documented to cross the Mid-Atlantic Ridge, that is still 1,000 miles from Britain, but it is noteworthy all the same. With an increasing seal population, a favourite prey of white sharks, my honest opinion is it is only a matter of time before one is confirmed here. Now that would be something!