Menu
NextWinter in the emerald isleNext 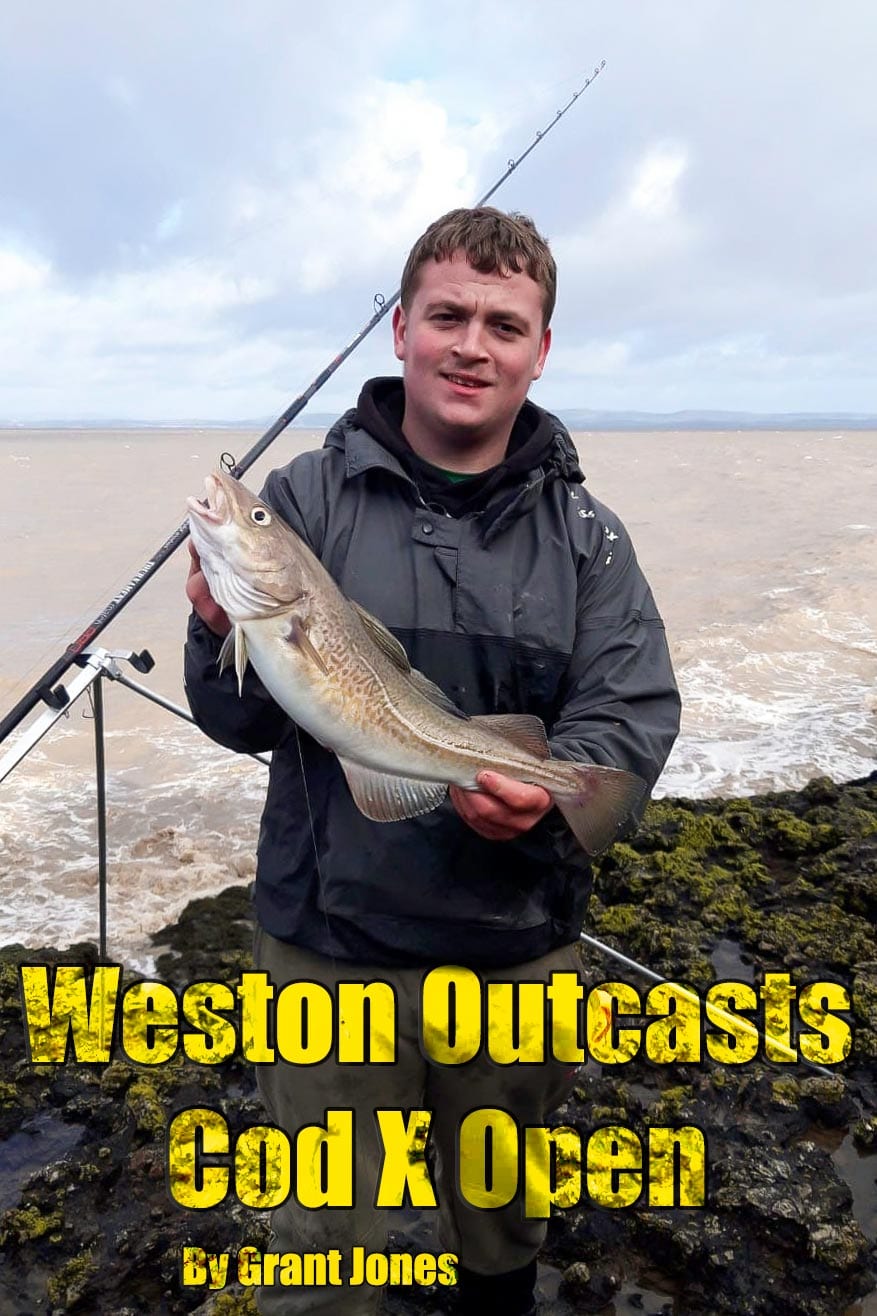 Back in 2011, Weston Outcasts SAC, a club with a history of laying on exceptional opens with class leading prize tables, decided to start up the Bristol Channel’s first annual open cod-only rover. With the boundaries set from Clevedon pier to Portishead pier, it encompassed many famous channel cod grounds steeped in angling folklore. From Ladye Bay at the Clevedon end, through to Battery Point on the final run to the limit at Portishead, it’s always offered everyone the chance to pick their favourite mark while still knowing the winning bag could come from anywhere.

Proof that the win is as predictable as the weather in March is evidenced by the event having run for 10 years and produced 10 different winners. With the match averaging 100 anglers a year, it would take some doing to win more than once. The cod themselves have been an unpredictable quarry over the years, with anything from a single fish through to bags of 8 or 9 being required to win.

Confidence of some good bags was high this year, with the Channel experiencing perhaps the most consistent cod fishing for six years or more. Regular catches of half a dozen or more in-size fish have frequently filled the local Facebook pages since the start of the season and the mad run of storms lately has kept the sprat shoals dispersed (which can often move the cod offshore and up in the water). Coupled with the warmer temperatures leaving an abundance of inshore food such as shrimp and crab for the cod to gorge on, we had the recipe for a great day’s fishing for all.

With biblical weather on the Saturday preceding the competition, a weather window appeared to be coming through just in time for the Sunday. We honestly couldn’t say that it felt like it throughout the day though! Winds stayed up, rain and severe hail moved through in intermittent squalls and before the draw for the match had taken place, stories had filtered through of one local angler slipping off the motorway during a hailstorm. With his vehicle reportedly upside down in a ditch and his rods poking through the windscreen, it was unfortunate that he couldn’t make the match but a relief to hear that he escaped with just a few scratches. 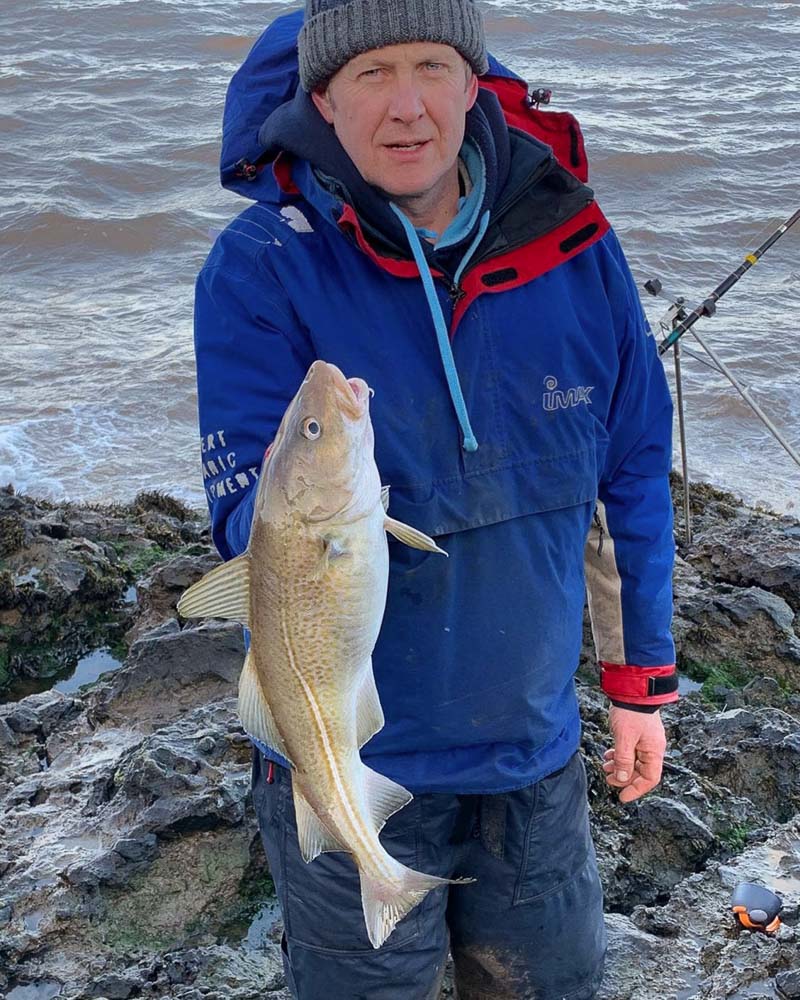 The club has run a virtual queuing system for a few years, which certainly saved taking a beating from the weather on Clevedon promenade for an hour or so. On collecting our respective queue tickets and purchasing a few early raffle tickets (always a good security option at these large opens), we would now have a couple of hours spare before the draw would begin. There were only two things to do in such a scenario – get some hot breakfast inside us and visit the tackle shop! Several other anglers had the same plan too – the poor workers thinking they had the easy early morning shift at the local Starbucks must have wondered what the hell was going on.

After the usual banter in Olivers tackle shop and with baits acquired and any forgotten tackle box essentials replenished, we all found ourselves back on the promenade. Thanks to the virtual queue, we lined up in an orderly fashion ready to collect our match cards and make the dash to our favoured marks. For some, this can feel a bit like Wacky Races! In-demand marks may only hold a few anglers and those with their sights set on a very specific outcrop of rock will be keen to get there first. The race to the mark is a bit of a triathlon: first, one must secure an early place in the queue, then make haste to the vehicle before sprinting across open fields to the hot spot. Naming no names, it was this last step that let down a couple of less-athletic anglers who were overtaken in the final stretches. Who says angling is a lazy man’s sport?!

For myself, competing for marks is rarely an issue. Joining my Dad, we fish a local mark in Clevedon called Monks Steps. It’s managed to produce some good bags for us over the 10 years the competition has been running, although it has to be said that shifting sand banks in the area seem to have left it devoid of the shoals of fish that used to frequent the mark. Other changes have seen a complete collapse in the supply of dabs for which the mark was renowned for in the past. This downturn in fish numbers, plus the accessibility of the mark and restricted casting space keeps the number of anglers heading here down to just a handful these days. We persist for a few reasons. Firstly, in such inclement weather you can fish in a sort of cave, offering great shelter from the hail on this particular day. Secondly, if the shoals do come through here you will be sharing the fish with a lot less anglers than some other marks, where people are mere yards apart. It’s a gamble, but the same can be said for any choice of mark in a rover.

The key on the majority of this coastline at this time of year is getting fish on the bank during the flood. That’s not because there’s any less fish to be caught on the ebb but the fishing becomes a lot more challenging, with the weed and debris lines running much closer in and the tidal pull being considerably faster. With the amount of storms so far this year, it wasn’t just the odd bit of weed that would prove an issue but whole trees drifting back down past us on the ebb! 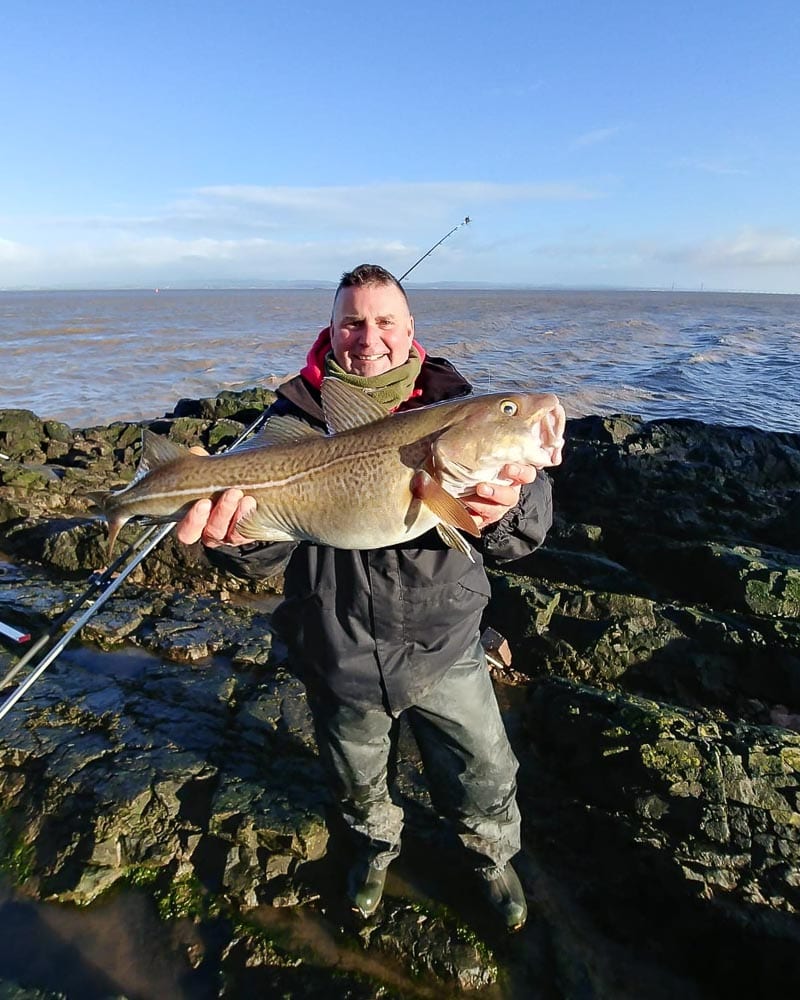 It wasn’t long into the match when the first reports of fish started coming through. Any thoughts that one fish could take the win today were soon dispelled as the reports of single fish turned into two or three, with fish coming out of Ladye Bay, the Walton Bay area and good numbers (but a smaller stamp) at Battery Point.

True to form, as the tide started to ebb, the debris came through in full force. No doubt many anglers, like ourselves, fell victim to the odd passing log or full trees on occasion. Hooking into a third consecutive tree in as many casts my Dad, Cliff Jones, managed to free his gear from it (unlike the preceding two). As the rig flew the final five yards to shore, a codling was treated to a short experience of life as a flying fish. The tide had receded some way by now, so I was quickly scrambling down the weed covered rocks, careful of the crevices disguised by overhanging weed. The fish had lodged on the edge of a rock, hanging by the finest of lip holds, begging the question how it had stayed on after being pulled through a tree and hurled towards the rocks. I took a firm grip of the fish under the gills so as not to take any risks of dropping it through the many cavernous gaps as I made my way back up to our fishing platform.

It had saved my dad the blank, being a weigher at a touch over 3lbs. I’d not been so fortunate myself, the gamble certainly hadn’t paid off. Nobody in our vicinity had more than a single fish to weigh and it left me thinking that maybe further attempts on this mark, when so many others a little further up the coast had produced the goods, would be a gamble too far.

By the time we were heading back to the weigh in, we knew bags of at least five fish had been recorded and it turned out the biggest bag totalled six. The stamp of fish making up the better bags proved to be the deciding factor, the majority of fish falling into the 2-4lb bracket and the biggest of the day, caught by Jason Brown, going 5lb 8oz. This was not a bad fish for the Channel but with such a healthy run it was somewhat surprising not to see someone pull out a low double. With £2 a head towards the biggest fish pool, it was certainly a profitable one for Jason though!

Despite some impressive bags, the final places on the prize table were still taken by bags of just two fish. This belied to some extent how good the fishing has been in the Channel this year, but also showed the effect of sharing fish out when shoulder to shoulder on competition day. No doubt, on any other day, all those with a pair of fish would have landed five or six.

Of the 97 anglers who fished, 27 anglers weighed in a total of 51 cod, with six double figure bags recorded. The match was won with an excellent bag of 15lb 8oz (five fish) by Dai Loder. His bigger stamp of fish had beaten out second place Nathan Gray’s bag of six for 14lb 12oz. Just behind in third was captor of the biggest fish, Jason Brown, who accompanied it with four smaller cod for a total bag weight of 14lb 8oz.

With first place taking £600, second £300 and third place £200 (in addition to his heaviest fish win of £200) there was £1,300 paid out in cash prizes, with a further seven quality tackle prizes closing out the top 10. It’s certainly not bad to have a 1 in 10 chance of walking away with a good reward for the day’s efforts and even better, for those less fortunate like myself, is the best raffle table you’re likely to see at any club open. 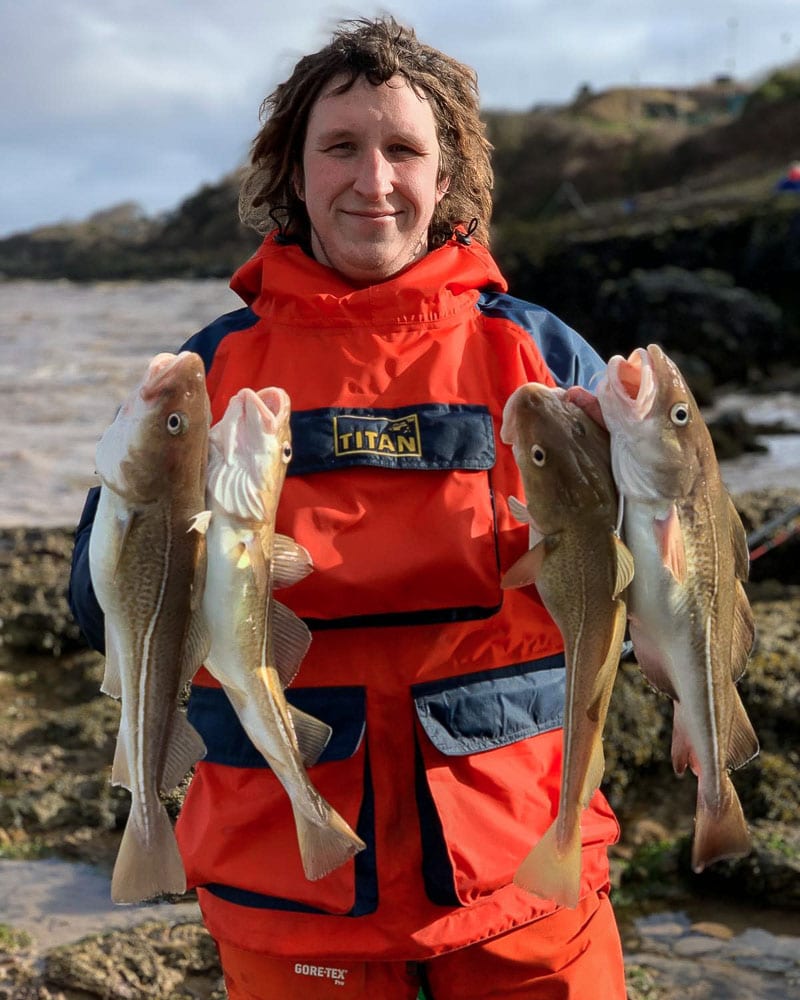 First prize in the raffle was a Zziplex rod(!) so it was a bit of a shame my ticket didn’t come out till second. Still, no complaints as that picked me up a Penn Mag 525 3. As it happened, I picked up a few other decent items in the raffle too and at the same time heard the story of an angler travelling all the way from the Isle of Wight only to damage the tendons in his ankle on the walk to his mark that morning! He had made a brief but failed attempt to fish through it, which really would have been inadvisable on such terrain in the conditions we experienced that day. I felt absolutely gutted for the chap travelling that far to not even be able to take part, so we’ve sent him the Penn Mag 525 3 for his efforts and the club has given him free entry to their next open along with £10 of free raffle tickets. We hope to see him at the next event!

After such a great series of 10 cod opens, the club feels it is now time for something new. Seeing the success they have made of this match, we look forward to taking part in and supporting their next venture! Thank you to everyone at Weston Outcasts S.A.C for such an excellently hosted event.