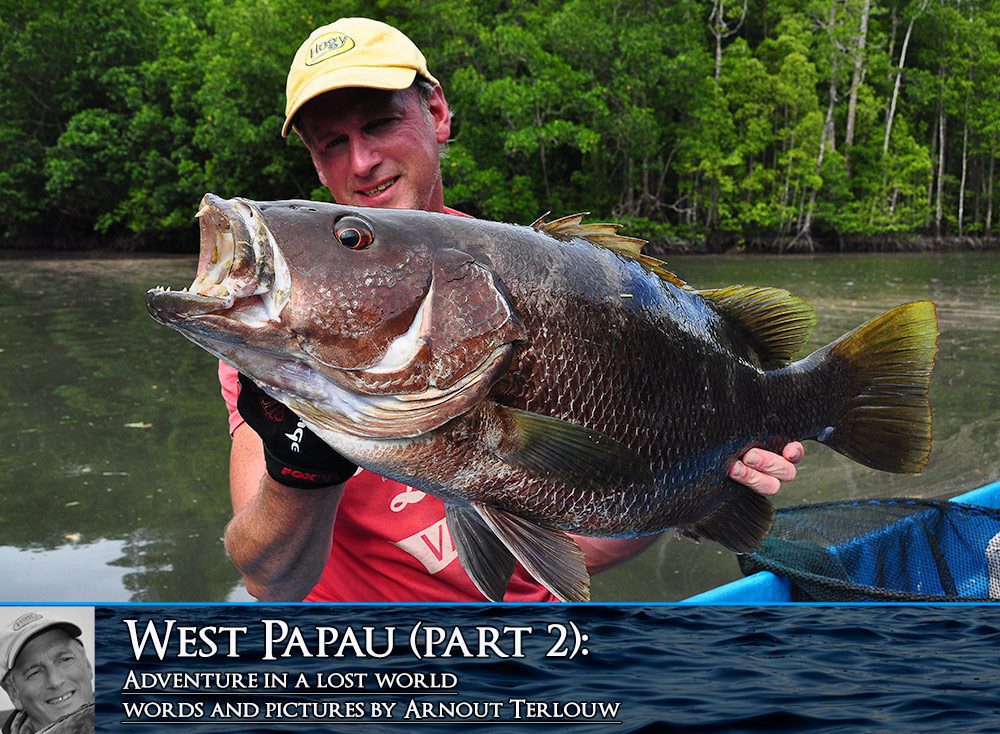 During my first trip to West-Papua (see part 1) I discussed future plans with Olivier Helloco. Olivier assured me that there were even much better places in West-Papua waiting to be explored. Not only for massive GT’s and Spanish mackerel, but also for the elusive Papuan bass and big barramundi!

We kept in contact and once in a while I got an email from him, telling me that he had again discovered some potential rivers and estuaries which could produce big Papuan bass (said to be the toughest and dirtiest fighting fish in the world!) to well over 20 kg, maybe even 25 kg, which would be way over the current IGFA record!

Of course, that got my attention and also the fact that the same places could produce some monster barramundi. Proof of that was shown in a short film he sent me of the man himself catching two barramundi of well over 20 kg!

Plans were made and by the beginning of November I was on my way to West-Papua again with three friends. Plan was to spend the first part of the trip fishing the rivers and estuaries for Papuan bass and barramundi and concentrate the second part of the trip on ‘blue water’, fishing the numerous islands, cliffs and reefs for GT’s and more.

Expectations were high as three weeks before departure Olivier told me that another group of anglers had recently hit the jackpot, catching numerous big barramundi and Papuan bass, with the biggest a whopping 23 kg; a new (unofficial) world record!

After a long and tiring journey involving 6 planes we finally arrived in a small fishing village in West-Papua where we were greeted by Olivier. Earlier that morning there was no sign of wind but by now it was really blowing from the East, chopping up the sea with big waves. No way we could reach the first estuary, so we headed for a beach halfway and hid between the islands where we set up camp for the first night.

The next day the wind had died off and before sunrise we were on our way again arriving at the mouth of the river by 11am. I immediately recognised it from the pictures and film and while we were setting up camp some fish started to hunt right in front of us. It didn’t take long before we all were fishing from the bank and 10 minutes later the first Papuan bass was hooked. Not a big fish, 3-4 kg, but a promising start. We could not wait to get out with the boats! But Olivier assured us that we were not in a hurry, as the tide would slacken off soon.

Instead of fishing, we first headed for the local village to meet the mayor to say hello and get permission to fish. We were greeted very amicably and after a nice lunch with giant shrimps we were granted permission and started fishing at around 3 pm. Initially, not too much happened with just a few small mangrove snapper hitting our lures. After an hour or so we came upon a small creek with a big submerged tree across it. With his first cast Lex was in to something pulling like a train. He managed to keep it away from the tree and it turned out to be a modest size Papuan bass of around 4 kg. If a fish of that size had so much power, what fight would a 10-15 kg bass put up?

The next cast was mine and I also hooked up, this time it was a real tug war! My 80 lb braid prevented the fish going back in the branches but minutes later it had found another snag on the riverbed, just under the boat. Luckily, I could lift the fish together with a big branch to the surface where we were finally able to net it. It was still ‘only’ 8,5 kg, but what an impressive fish! It really looked like an angry Mike Tyson! A mean fighting machine…

After catching another three smaller fish from the same spot, the action dried up so we headed back to the main river to talk to the other guys. They didn’t look too happy as they had both lost a monster, snapping their 80 lb braid within seconds. It got even worse later when just before sunset they lost a couple of big barra’s trolling in front of the camp. That’s fishing!

The next day, expectations were high again but after a fruitless morning it looked like all the fish had disappeared.

Was it the moon phase with big tides or had the majority of the Papuan bass moved back upstream? To make things worse it started to rain heavily over the next two days turning the river brown with almost zero visibility. It was no surprise that the fishing didn’t improve. We caught a few smaller Papuan bass, Dennis lost another giant and I lost a meter plus barra after the initial jump, but all in all it was not what we, and especially Olivier, had hoped for……time to make a decision! Either move to another estuary, with probably the same brown coloured water, or forget about the Papuan bass and barramundi and head for the blue water.

After fruitlessly trying for one more afternoon we decided it was time to pack up camp and by the next morning we were on our way again in the two long-boats. Olivier suggested that we could fish on the way so I prepared my heavy popper outfit with a Stella 18000 loaded with 80 lb braid, 100 lb fluoro carbon leader and a Sebile Splash popper. After motoring for two hours, we were facing a steep rock cliff with deep water just meters off. My popper landed close to the cliff where some baitfish were showing and after two ‘pops’ the water exploded – I was in!

For a brief moment I was not sure if it was a big fish, but that changed almost immediately when I was nearly pulled out of the boat. What followed was an epic fight that pushed me and my gear to the limit. It was a full 15 minutes later that we finally got a massive GT in the boat, it was close to or even over 45 kg. What a start!

The others, who had never experienced any of this kind of fishing were literally quaking in their boots after witnessing the brutal fight these aggressive fish give you. After we took pictures of the monster they were all eager to hook their first giant trevally!

To cut a long story short; the rest of the trip was packed full of explosive topwater strikes. Not only from (big) GT’s, but also from big barracuda’s, bluefin trevallies, jobfish, groupers, coral trouts and Spanish mackerels. The last species accounted for some spectacular moments. Sadly, most of the Spanish Macksa were lost, cutting the fluorocarbon leader with their razor sharp teeth, or just popped off  during the fight.

One day, late morning when the sun was high in the sky and it was blistering hot, we encountered a feeding frenzy of both Spanish mackerels (big ones!) and smaller GT. At one time I hooked a small GT and while I was playing it a couple of huge Spanish were chasing the others lures, just 10 meters from the shore! Dennis hooked one, it came off and in almost the same second the other popper of Lex was nailed. Luckily, that fish stayed on and after a long fight we had an angry 154 cm long, 30 kg+ Spanish in the boat! Half an hour later we had another double hookup of big Spanish, but this time both fish were lost.

But it was the size and numbers of big GT’s that made this trip really special. Most fish we hooked were in the 12-25 kg range, several of 30 kg+ and 4 monsters of 40-45 kg+! We did not weigh the fish, in order to get them back in the water as quick as possible, but with Oliviers expertise of guiding Japanese anglers in Komodo for years and seeing many GT’s over 40 kg, he was able to estimate the weight of these giants. Of course, we also lost a lot of big fish, not able to stop them from ploughing into the rocks and reef. Even 80 lb braid was useless in this situation, snapping like cotton.

Apart from fishing with topwater lures, we also did some trolling which was very productive sometimes, especially one place close to our last ‘blue lagoon’ camp where the tide was really racing, pitching up big waves over the edge of the reef. Here we experienced an exceptional display of hunting Spanish mackerel, chasing schools of baitfish in the surface, launching themselves 5 to 10 meters in the air like a rocket! It sounds unbelievable but I can assure it was true. It left us with open mouths and wide eyes!

Nothing gets your heart pumping more than seeing a frantic bust-up of big fish close by and watching your popper being smashed just meters from the boat and all hell breaking loose! It’s something which you never get tired of!

On the way back, Olivier took us to some fishing platforms where local fisherman catch small fish in the night, attracted from the deep with bright lights. That supply of food also attracts giant whale sharks who regularly visit because they get fed by the locals hoping that they don’t destroy the nets full of small fish. Normally, they disappear into the deep with the first light and when we arrived around 10 am there was not much chance of spotting them.

At the last platform we were told that some whale sharks had been around at 4 am, but were now long gone. They still had some small fish left and after we paid them some money they were willing to throw them in the water, to see if maybe one or two were still around somewhere in the depths… and guess what? Within a minute, two big whale sharks appeared out of nowhere!!

After 20 minutes swimming and filming with these gentle giants we could not believe our luck. This was really the icing on the cake, the best way to end this fantastic trip.

After that trip, we were totally hooked to say the least and eager to return and so we did. Two more ‘blue water trips’ followed and we experienced once more fantastic fishing from time to time. Adventurous trips, with no luxury, camping on virgin beaches, exposed to the sun and wind… but with fantastic fishing often just a 15 minute boat ride from the camp. ‘Turtle island’ with a deep gully between two vast reefs proved to be a fishing heaven for big Spanish mackerel – on poppers but even more on sinking stickbaits and jerkbaits.

Addictive fishing I can assure you! Besides that we also caught groupers, barracuda’s and of course loads of big GT’s that only wanted to do one thing – destroy your lure! But on the (long) way back home those elusive Papuan bass were always in the back of my mind… to be continued in part 3!