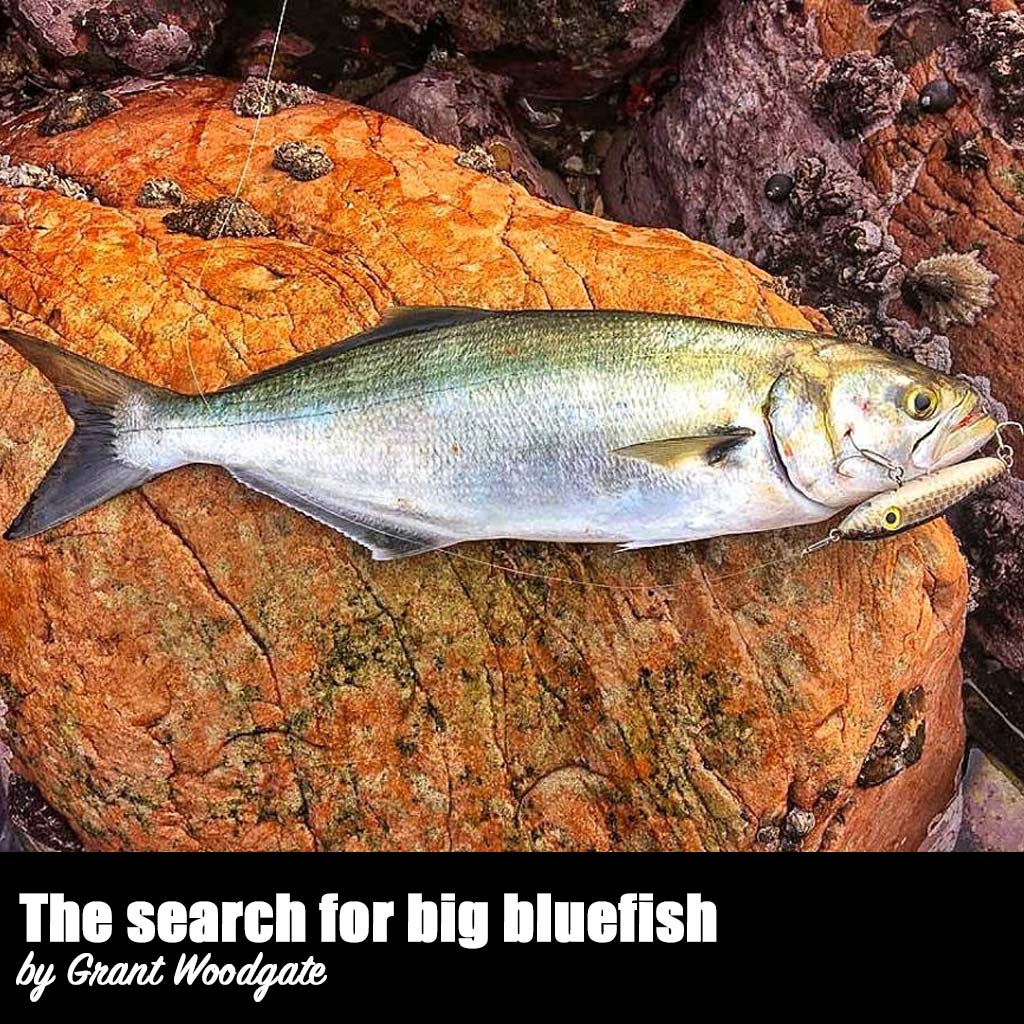 With our family summer holidays fast approaching and my wife needing to work a few extra days than me, I somehow managed to convince her to allow me to go a little earlier and spend some important days testing some new prototype air brushed lures on a fish I had not targeted for a long time, bluefish!

Ever since I unexpectedly hooked into my first bluefish over 25 years ago whilst fishing for bass, I had an instant respect for these fish and took every opportunity to try and catch them whenever they were around. This, unfortunately, isn’t that often in Portugal, but over the next years I was lucky enough to target them quite a few times, and had managed to land a fair few of these hard fighting fish up to around 15lbs.

Bluefish are a hard fighting fish, that can make strong runs, jump out the water and tail walk shaking their head. They often hunt in groups so there is always the chance that after hooking up you will be broken off by another fish going after the same lure! This is made worse as they swim with their mouths open where they have razor sharp teeth hidden just under their lips.

It had been 8 years since I last seriously went after these fish, so I was really excited to be able to spend some days once again chasing bluefish. Setting off with a handful of essential clothes, a case of lures and a couple of spinning rods, I made it to Portugal keen to make the most of the time I had. With beautiful scenery including a backdrop of stunning mountains and waterfalls I was ready to get out and explore the coastline. I was fortunate enough to have fished this area in the past so had a good idea of some accessible fishing spots, but knowing that big swells are common during summer months, I made sure to pack a flotation jacket and marine radio.

After locating my accommodation and quickly unpacking there was time for a quick session before dark. Although conditions were good with no wind and some nice swell, the boulder type beach I had tried was very quiet with no action at all. The next day I headed for a point on a sheltered coastline where after a steep hike down a cliff I managed to reach a deep water spot where it dropped off to around 50 meters right under my feet! 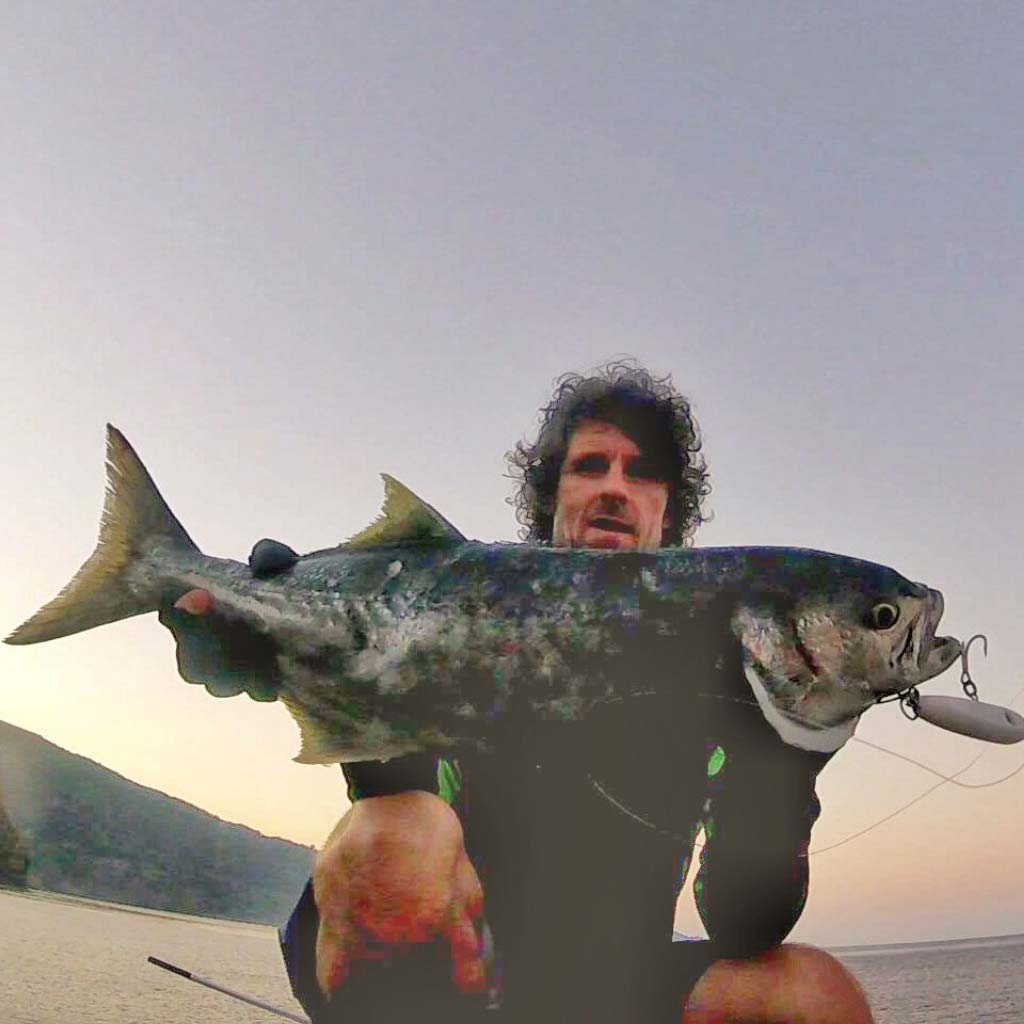 With no swell and crystal clear waters the first few hours resulted in a few half hearted hits that unfortunately didn’t hook up, leaving me thinking that the water clarity and lack of wave action would make hooking a fish a little tricky. Apart from a small rockfish taking the Slim Minnow whilst jigging, fishing was slow.

Bluefish prefer to hunt in small shoals and spend much of the time patrolling up and down rocky headlands and points. In some fishing it pays to constantly move from spot to spot, but when out on a good point, fishing for bluefish, it’s often worth waiting it out, as these fish can sometimes be seen sweeping through an area looking for bait fish. Unfortunately they can also be gone as quick as they come, so having the lure in the water as much as possible certainly helps.

I concentrated on casting along the edges, and around a nice tidal rip just off the point. As the sun got lower I could feel that for the present conditions it was prime fishing time! Casting from high up I had a good vantage point and my heart was in my mouth as I saw a couple of nice bluefish following my lure. A few tweaks later and I was on with my first bluefish of the trip. Not a big one but I was certainly happy to get one under my belt!

Blue fish are equipped with a set of razor sharp teeth which they use to chomp any unsuspecting bait fish in half! When they decide on a meal they will chase it down, and often the fleeing bait fish can be seen skipping across the water surface trying to escape those lethal jaws. Hunting in a shoal has its benefits and as one fish makes the catch the other fish are often left with the remaining half to fight over. 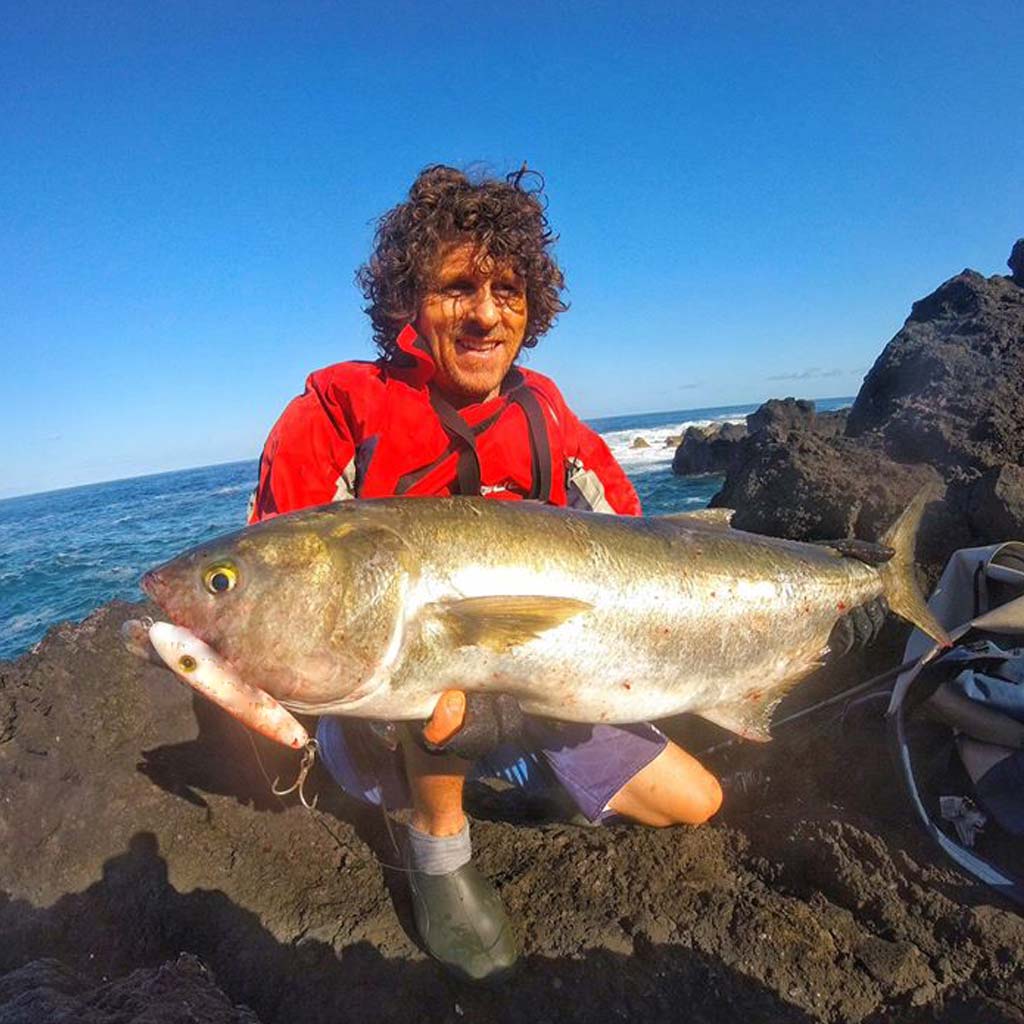 Although these fish are aggressive predators they are certainly not stupid. When targeting with lures, although a straight retrieval can on occasions work, more often than not more is needed to provoke one of these fish to hit the lure! An erratic action with varied speeds is generally far more effective, especially when fishing in clear waters.

I decided I would spend the next days close to home fishing some of the rocky headlands which meant I would be able to arrive early and fish again at the end of the day. These spots were far easier to access and had been just as productive in the past. As a consistent westerly wind blew the swell started to pick up on this more exposed coastline. With the water a beautiful turquoise blue, conditions looked great!

During the next evening session conditions were looking good! The first hour was quiet but I certainly felt this spot had potential. Sometime later, casting straight out into the current I had a hard take on my 50g Enticer Tweak bait. One of the great things about bluefish is the way they jump out the water shaking their head to try and free the lure! As this one leapt up right out the water I knew I was attached to a personal best Bluefish!

But, the excitement was short lived as the fish had literally inhaled my lure exposing the strong fluro Carbon to those razor like teeth! No sooner as I put some pressure on the fish to turn it from going towards the rocks, my line was severed. I can’t remember what profanity I yelled out, but I was not best pleased! 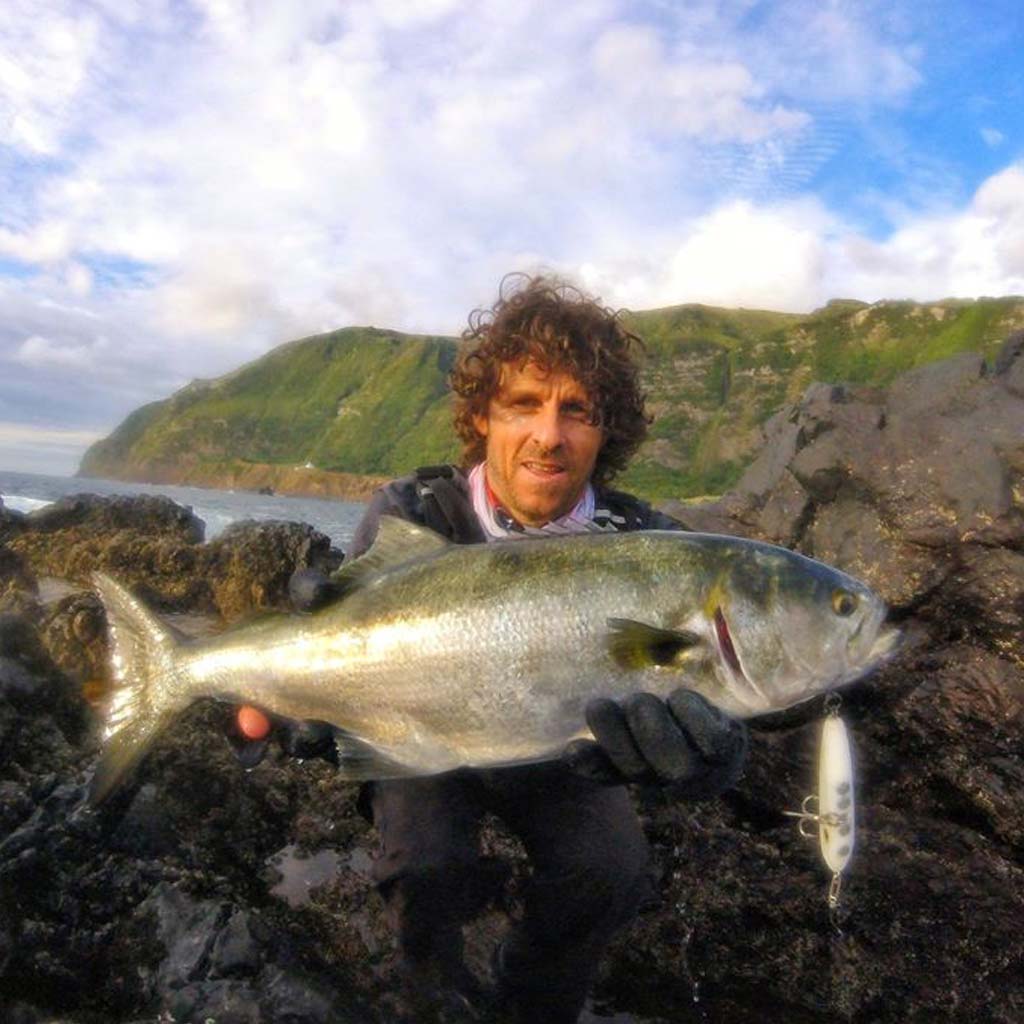 Later in the session I had another big Bluefish try to hit the lure as I was taking it out the water, proving how these fish really like to hang around close to the edges.

Although during this session I hadn’t landed a fish, It was certainly exciting fishing and I was looking forward to the next evening.

The next day I decided to set up a rod with a bait some distance away to optimise my chances of catching! Fully focused I spent the next hour casting into a rip around 80 meters out from the point, the same place I had hooked the big bluefish on the previous evening. What was that strange noise I thought?

In all the excitement I had completely forgot about the other rod, and as I looked over to see the tip banging over and hearing that beautiful sound of line zipping out of a spool I raced at top speed over the rocks to get to the rod.

As I set the hook, I knew I was onto something big! It’s not a good idea to try and land these fish too early around the rocks, so after making sure he was not too green I found a nice little cut in the rocks to bring him up with a wave.

I was a bit worried about the wire leader, which was a little on the light side.

No sooner as he was on the rocks the wire leader broke finally giving out to those razor sharp teeth!

The next session resulted in a smaller lure caught Bluefish, but I was enjoying the fishing immensely. With one session left before I had to head to the airport I decided to check out a spot I had fished about eight years previously when I was here. I needed to be careful, as this spot faced the full swell and was often not fishable due to big waves crashing into the rocks you fished from. I found a nice vantage point allowing me to cast out to the point and also work along the edges where Bluefish could be hunting in the backwash.

Using an 85g Enticer Tweak I was able to control the lures from high up in the strong sea. The advantage of being high up is you get to see all the action. So when I saw a big double figure bluefish chasing my lure down, I got ready to hold on! Once the fish was on I wondered how the heck I was going to land it in the rough seas!

Fortunately, a big set passed through whilst I played the fish, and as the fish tired there was a nice lull in the waves, giving me a window to scramble down the rocks and grab the fish for a quick photo. It was a perfect end to a most enjoyable few days fishing!

I was really looking forwards to meeting up with my family, but I certainly wouldn’t have minded just a few more days spinning from the rocks! Exhausted I found the energy to quickly pack and get my next flight. As I set off to the airport I decided I definitely wouldn’t be leaving it 8 years before I returned to chase these awesome fish again!