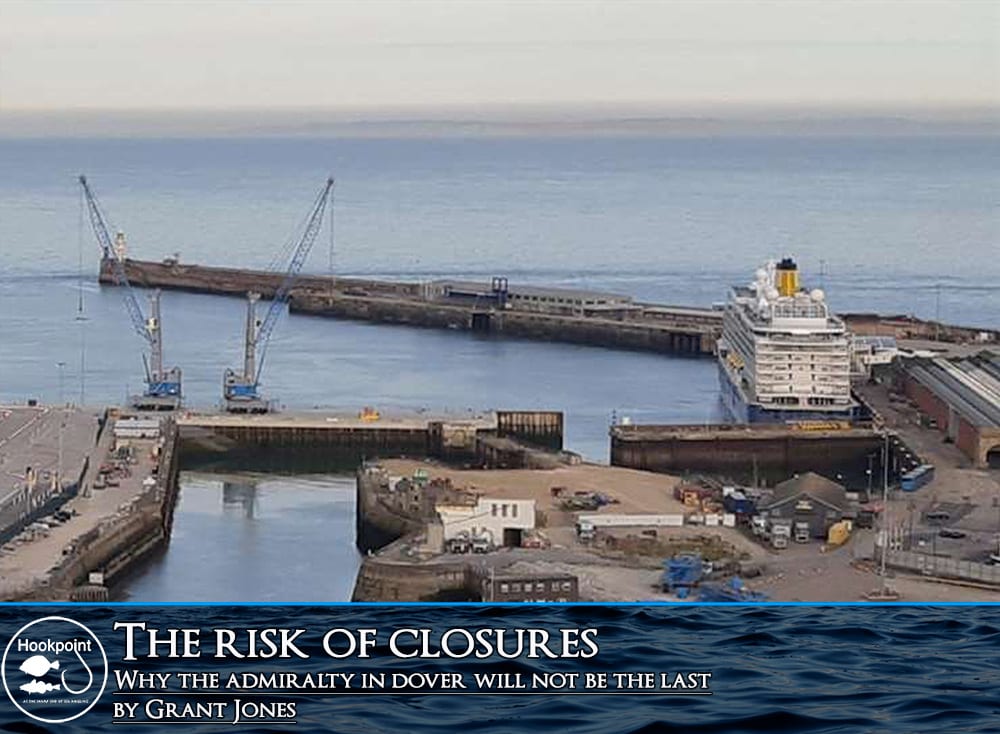 Hopefully it has come to every anglers attention recently, that the long held rights to fish the Admiralty Pier in Dover have been removed. The Dover harbour board, with perhaps questionable unilateral authority, have opted not to re-open the pier for locals to fish from. Clearly this has been met with outright disbelief from the local angling community and there is a change petition available to try and invoke a debate with the ultimate aim to get it re-opened. Such is the climate though, I would not be overly optimistic.

If you want to sign the petition, you can do so here: https://www.change.org/p/local-government-dover-reopen-the-admiralty-pier-dover?

There have been a number of reasons stated for the refusal to re-open, with even more hypothesised. To give the formal line, it is by all accounts a question of heightened security, referencing the Manchester terrorist attacks as some fairly strung out reason for restricting access for anglers. This, of course, sounds like somewhat of a smoke screen and a convenient excuse for the board to hide behind.

The cost of maintenance to allow access and ensure no potential liability for injuries or worse, is always a pressing factor in allowing public access. Especially sporting activities carrying a higher level of risk. If this were the underlying reason and was discussed, then no doubt solutions could be found. Unfortunately, we still get the yarn about the Manchester terrorist attacks.

A more cynical view taken by some is anglers have got caught up in an attempt to restrict the ability of reporters to monitor, film and report upon the number of illegal migrants turning up at the port on a daily basis.

The real answer, the glaringly obvious answer, is that they simply do not want fishermen there. They will now leverage any excuse to achieve this aim and deny long held and established rights. So what can we do about this?

First of all, we need to accept that this is not isolated and will not be the last place restricted to anglers over the next few years. As recently as the last couple of weeks, an MP local to myself proposed the banning of anglers along Blue Anchor seawall in Somerset, a very popular mark for anglers needing easy access. This in itself is what often hurts most about these restrictions, they tend to impact the marks that the young, old or less mobile anglers enjoy to fish. The MP didn’t stop to realise it was the campaigning driven by local anglers that raised the funds to keep the public toilets in Blue Anchor open for everyone’s benefit; No, the MP simply dislikes angling and will jump on any excuse to ban it.

There is an unfortunate undercurrent of a growing and increasingly aggressive anti-angling brigade, obtaining a bigger voice as each day passes by. We are at a dangerous precipice where a high profile and successful retraction of anglers long held rights will be seen by many as a precedent to do similar, right across the country.

The obvious preparation to this is to ensure we have a unified and represented voice, and whilst I’ve both proposed the joining of the Angling Trust and heavily criticised it in the past, we certainly need them at times like this. Whether they have the level of support themselves from sea anglers to warrant the funds to address this on our behalf is another matter altogether. Only with increased membership will we get increased representation.

In addition, we really have to be seen as whiter than white in the way we utilise the often public spaces. Some anglers, and it is still in the minority, really do let us down on this front and, unfortunately for us, angling as a whole ends up judged by the lowest common denominator. In this regard, in the short term, we have to do the best we can to out those ruining it for the rest of us.

In the longer term, the answer may end up bringing us back to that favoured debate, the sea angling licence. Such a licence need not even be charged for, however, it could be taken away if someone is found to be threatening the perception of our sport. It is this level of policing ourselves that inevitably must occur if we are to tidy up the perspective form the non-fishing general public.

If we don’t get all of our ducks in a row soon, we can almost guarantee that the anti-angling brigade will do so, and once they have a few decisions side in their favour, they’ll build up momentum that is going to be very difficult to stop.

In being whiter than white, the other thing we as an angling community can do, is be far more vocal about the good going on in our sport that benefits everyone else. The beach cleans, the sea safety education given to people in passing, not to mention the mental health benefits.

So next time you’re fishing a jetty, pier, sea wall or any such space used by the public, ask yourself what perception angling is giving off to the general public. Take a rubbish bag, clear up others, angling rubbish or not. Forget about leave only footprints and focus instead on making it better than when you first set foot on the mark. Also be extra careful that no dogfish are swimming back ashore to beach themselves and leave a nasty sight for the morning jogger. Think about how you park, how you position the rods so as not to cause trips or obstruction.

None of this is going to be a silver bullet that protects us from further attacks, but it certainly makes their usual excuses hold less water. If in the longer term, the answer is a licence, so we can show how dissenters are promptly kicked from the sport, then I am all for it.

In the mean time, get the petition signed. Even if it is not local to you, your mark could be next.