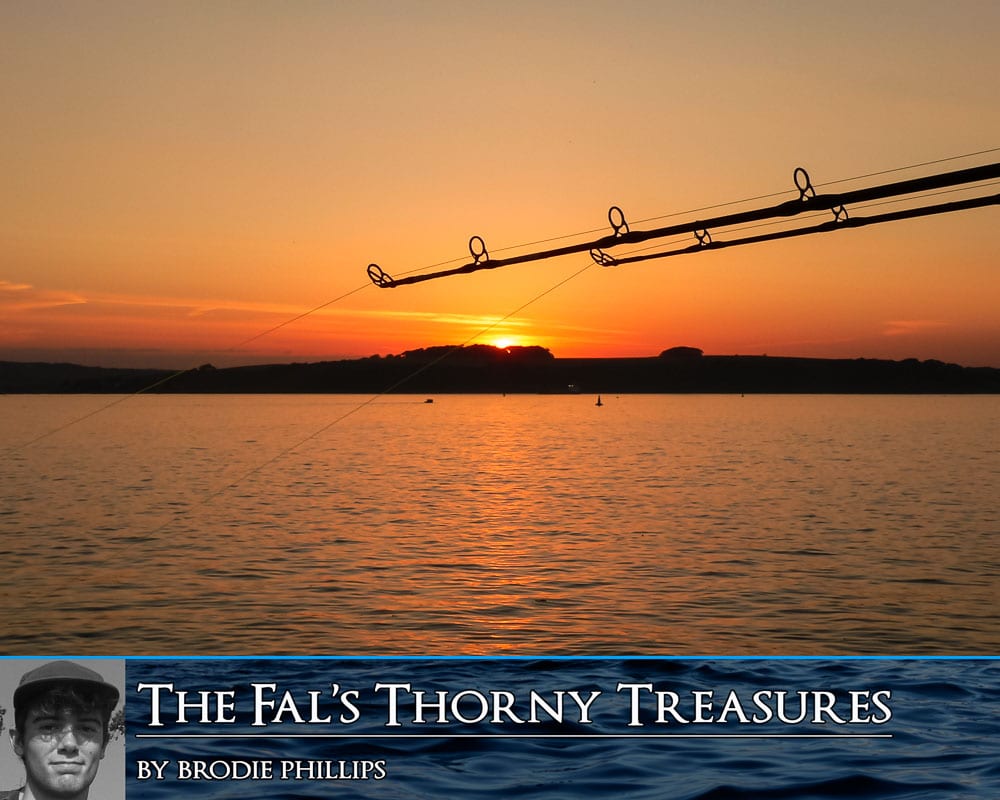 Throughout my angling life I have always been fascinated by one particularly special family of fish and I am sure it will come as no surprise when I say that the species I love the most are the rays. It is without question that the species within the ray and skate family are some of the most sought-after fish in our waters and a quick scroll through any sea angling social media will confirm this, with many pages and groups filled with pictures of proud anglers showing off their catches. They are also (in my opinion) some of the most beautifully marked fish that we can target in the UK, with each fish having their own distinctive markings that make each capture even more special.

My own fascination with these species stems from my first encounter with one of the thornback rays that inhabit the mysterious waters of the Fal estuary. I was just 11 years old, and I had persuaded my Dad to take me fishing at one of the quays in Falmouth Harbour. I baited a shop-bought pennel rig with a large chunk of mackerel and lumped it out about 30 yards off the harbour wall. I was not expecting to catch much, so it came as a great surprise when my Shakespeare bass rod bent double and I hauled in a small female thornie. I was absolutely elated with the capture, and I vividly remember showing the picture to everyone at school the next day!

For years after I struggled to find the species, enduring many long hours fishing the estuaries with just dogfish and bootlace eels to show for my efforts. To this day, I still haven’t caught a ray out of the nearby Helford River, although I have started to find a few more fish at my local haunts in the Fal estuary. The Fal is a huge expanse of water that spews out into Falmouth Bay and it contains an array of features that are particularly attractive to thornback and spotted rays (which I shall discuss later). Most of my fishing has been on the Falmouth side of the estuary, purely due to the long drive required to fish the other side.

For ages, I failed to find another thornback from my local marks but a stroke of luck during the summer of 2017 saw me land my shore PB thornback ray of 7lb 9oz from the Trefusis stretch of the Fal.

A few more sessions at the mark produced my one and only spotted ray, a small but gorgeous fish, with an array of black and white spots coating it’s mustard-coloured skin. Another notable moment was when I watched my good friend Callum Duncan land a pair of spikey sand-shufflers during a flounder session in the winter of 2018, strangely on small rag baits! Not to be outdone, I returned to the mark a couple of days later armed with a packet of frozen mackerel. A few casts later I landed a male thornback that pulled the scales round to 5lb 4oz – not a large fish by anyone’s standards, but a sure sign that we had begun to work out the feeding patterns of the Fal’s ray population.

Despite our growing success, I have never been struck on the reliability of the marks that I fish. Other people’s catch reports support my thoughts, it is only the fortunate (or perhaps the most skilled) few who consistently catch good fish from these marks, with many anglers failing to hit the target time after time. This is made particularly evident by reports from Trefusis, a mark which is regularly referred to as ‘dreaded’, ‘cursed’ and a host of other adjectives that imply how unproductive it is for some unlucky anglers!

Whilst it is a known fact that ray fishing requires a lot of dedication and patience, I have always wondered what the fishing is like on the other side of the river. I’d only fished one mark along the east bank and this was for some of the other species that inhabit the Fal (such as bull huss and gilthead bream). I found it difficult to gather any useful information regarding potential marks in the area, so I set about looking for places that I thought could have potential to hold a thornie or two.

Something that I find particularly intriguing about the east side of the river is that there appears to be more fish holding features than the west side. One of these is a stretch of the shore where the shipping channel snakes into the casting range of some anglers.

However, the feature that I found the most interesting is the abundance of maerl beds in the area. There are large beds of this red algal structure on the east side of the Fal, along with a smaller bed in the mouth of the Percuil River. These are magnets to a plethora of marine life, particularly predators like thornback ray. The maerl beds in the East Narrows are dived on a regular basis, and the local population of thornies are often the first large creatures that the divers encounter. To me, this indicated the possibility of good fishing in the vicinity and I was excited to get out there and see if my ideas would prove successful.

The next part of the plan was to find a few likely-looking marks using the power of the internet. I like using Google Maps and the Navionics web app for this as they aid me in discovering paths down to marks, finding out what the ground is like, the depths within casting range and so on. A bit of virtual exploring resulted in a few marks being identified and I planned a session to fish an evening high tide at the most well-known spot of the three. This mark is subject to a strong left-to-right run of tide and there is a bed of maerl just a few hundred yards to the right, therefore I was confident of finding a feeding fish or two.

Callum and I arrived at the mark at half five in the afternoon. We were met with blazing sunshine, a totally clear sky and a blissfully calm sea.

The light easterly wind meant that we were totally sheltered, which was both a blessing and a curse – there was no question that it was the hottest day of the year! I glugged down half a bottle of much-needed water before rigging up my go-to pair of beach rods. I went for my usual 4ft pulley dropper rigs loaded with frozen sandeel and mackerel baits. I had a feeling that the tide was beginning to slow as there were only 2-3 hours left of the flood, so I opted for plain 6oz leads on both rods with the intention of letting them roll around in the tide and find a fish-holding feature. This is a tactic that I have started using since I was told about it a year or so ago and it has certainly improved my ray fishing, accounting for a few small eyed rays earlier in the month (which were a new species for me).

My first cast with the sandeel-baited rod was a bit sloppy, looping upwards rather than flying straight, and plonked into the water about 60 yards out. I wasn’t too bothered as short to medium range casts can produce some nice fish in the river, so I left it to roll about in the tide, letting the current take some line before flicking the ratchet on. I lobbed the other rod close in to my right and set about rigging up a third rod, which would be smacked as far as possible. By this time, the first rod had rolled a long way down tide, so I was hopeful that it had found a depression or other feature to rest up against, preferably with a ravenous Raymond close by!

I had just finished rigging up my third rod when I noticed my line on my first rod drooping and rising a few inches.

I left it for a few minutes but nothing happened, so I trotted over to Callum to see how he was getting on with his new multiplier setup. When I returned to my rods to rebait, I noticed that my line had travelled almost 90 degrees from where I had cast. I had a small gut feeling about what may have caused such an exaggerated movement, so I wound down and struck hard into a significant amount of resistance. For about 20 seconds it went quite light, and I wondered if I had hooked into the inevitable dogfish. However, the fish woke up as it neared the shore and a series of powerful wing beats confirmed to me that I had found my target. After a short tussle, I clambered down the rocks and plucked my prize from a water, a beautiful male thornback ray with a nose the colour of coal.

It wasn’t particularly big but I like to weigh all the rays I catch as they’re all special fish to me, so I popped it on the scales. The little black numbers on the screen flickered before settling on 5lb 8oz, not a big fish but more than enough to put a smile on my face! A few quick pictures were taken before I slipped the ray back into the lapping water and watched him glide away to feed on the maerl beds and hopefully gain a few pounds for when the next angler catches him!

After that fish I was hopeful for one more, although I wasn’t too fussed nor expectant. The Fal rarely produces more than a couple of good fish per session, and any red letter days are to be cherished. This proved to be the case on this occasion, as the tide run petered away into a trickle, the spider crabs came out in force and I could only manage a pair of dogfish in the hours that followed.

We returned the next day, hopeful that we’d strike lucky and find another winged beast. Unfortunately, we only found a few dogs between us and got mobbed by spider crabs, a reminder of how temperamental the estuary can be.

Despite the doggies, I felt as though the downsides were outshone by the thornie success. As I said earlier, it’s a fact that ray fishing in Cornwall requires lots of time and effort, so to be rewarded with the target is a success in my book. Our success showed promising signs that my theory about the east side of the river and its fish-holding features may hold water. I can’t wait to carry on exploring the river more in the coming months.