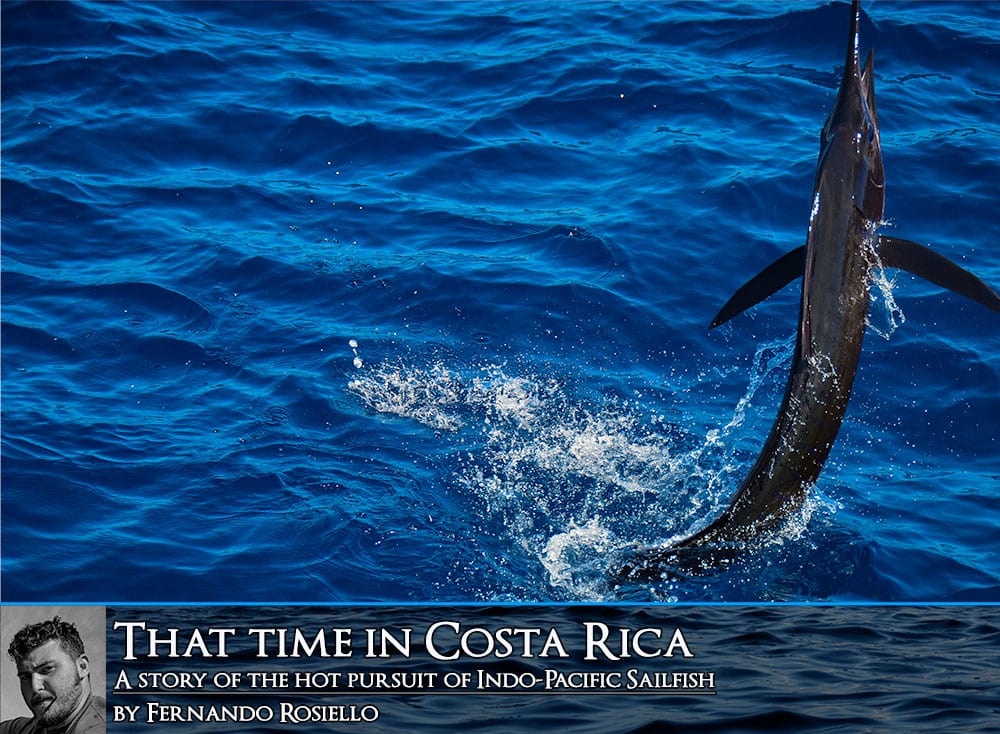 I am Fernando Rosiello, I am 22 years old and I am in love with the sea.

I am a Biologist, Angler, Divemaster, RYA Captain, and Nature Photographer.

I studied Marine Biology at Newcastle University, UK to learn more about the many aquatic species that live in all the seas and other marine environments. I wanted to understand their behaviour, their morphology and their habits, in order to understand how I could fit even better into their environment.

Through the years, I have come face to face with several species, from the smallest shrimp to the biggest shark. During my career, I have also become a divemaster, one of the most advanced stages in the diving world, allowing me to obtain a unique view of many more marine creatures. Looking at the sea from an underwater point of view is so different from what you see and think when you are at the surface looking down. Diving helps you to understand what those species are doing, more importantly why they are doing it, whilst also giving you a more direct view of the physical laws that occur in the waters of our planet.

As I believe practice is the best way to learn something, in recent years, I set a goal for myself to try to observe, fish for and picture as many species as possible. For this reason, in 2016, I started a World Wide Fishing plan that would bring me to all the continents in just a few years. As you may imagine, COVID-19 ruined the plans for 2020, but hopefully, I will return to travel again very soon.

In this article, I will describe what a typical sailfish trip in Costa Rica looks like, analysing all the aspects involved in the fishing action, the target fish, and the weather conditions. 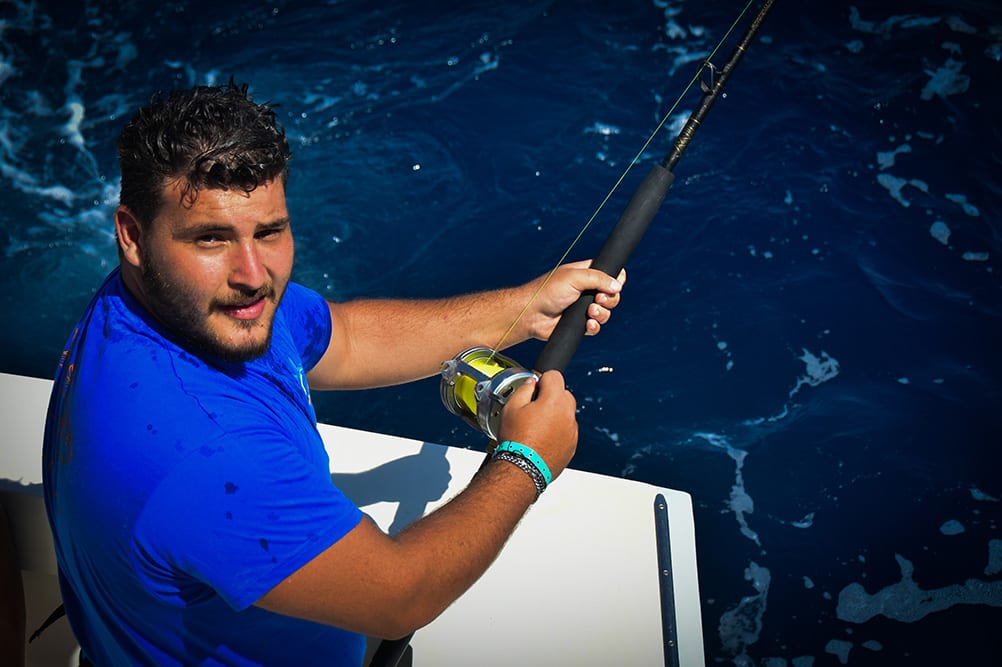 The Indo-Pacific Sailfish is a marine species native to the Indian and Pacific Oceans but also found in the Atlantic Ocean. It feeds mainly on tunas, mackerels, flying fishes, and sardines. The common name “Sailfish” comes from their large sail-looking dorsal fin, which acts, as believed, as a thermoregulating system for the animal. It is one of the dream catches of every sport fisherman, a dream that can come true only if you are in the right place at the right time.

Our adventure starts in Guanacaste, a province of Costa Rica. Guanacaste is a very famous region for wildlife, fruit, sandy beaches, like Playa Conchal, and, of course, sport fishing. We wake up early on the first morning to get to a local harbour in which our boat was docked. Once we get there, we jump on the boat and eagerly start our steam out of the port, full of excitement and optimism for the day ahead, while giving as usual a final look at the knots, lines, reels, and baits to make sure that all is set. Preparation is the key to success and with such a hard fighting fish, the slightest oversight could prove very costly.

Our idea is to troll for approximately 12 hours looking for big pelagic species like wahoo, dolphin fish, and yellowfin tunas, but hoping to target especially the Indo-Pacific Sailfish (Istiophorus platypterus), one of the most famous predators of the ocean and sought after catch of the sport fishing business.

We start cruising towards offshore waters whilst looking for some hunting birds, the giveaway on the surface to what may be occurring underneath. These birds act like homing beacons to the sport fishing boats looking for any early indication of where the bait fish may be, and the predators that naturally follow.

We opted to fish with 7 lines in the water, with the help of two outriggers. 5 lines had big colourful konas and dead sardines, and the remaining two, those closest to the boat, were baited more simply with just the dead sardine as bait. The chosen fishing spot was quite far from the port, so we started trolling almost from coastal water, with the chance of getting some strikes and good fun on the go, in the wait for something bigger and faster. 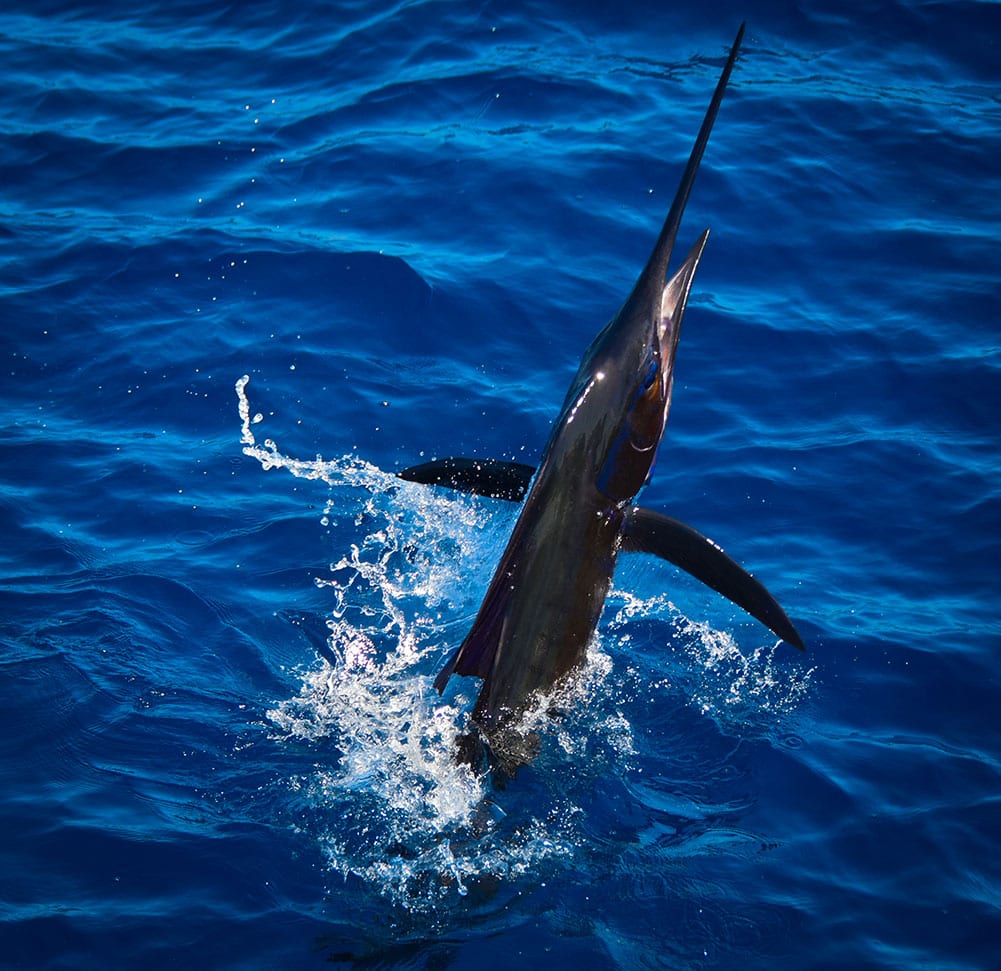 While we trolled on our way to the spot, we got a couple of bites from a school of dolphin fishes (Coryphaena hippurus), also known as mahi-mahi. The size is not incredible, but they offer us a chance to warm up the reels and put something in the cooler. The fight is one of the best for a fish of it’s size, with a relentless energy and if you are fortunate enough, see acrobatics to go with it. The mahi-mahi has a very tasty white meat and is an everyday meal in Central and South America, especially grilled (A la plancha). During the cruising mode, I get the chance of taking some pics at the ocean, which looked very calm this day, a very unique condition that always helps us in the fishing action and, of course, also in the video/photo making.

After 3 hours of cruising/trolling, we finally get on the spot, a spot which is very famous for International Big Game Competitions. The fishing area where we are on is a sort of canyon, a very interesting place to find some billfish. After approximately 30 minutes of trolling, we encounter a school of very small sardines, hunted by a couple of sailfish: It’s showtime!

We switch all the konas to big dead sardines and we get a bite! Finally! I start fighting the fish on stand up 25lb tackle, it jumps everywhere, the adrenaline is pumping, we are doing it! After a 20 minute fight, the fish is close to the boat and we pull the hook in the safest manner possible, in order not to hurt the fish in any possible way. We’re privileged to fish for these sensational specimens and fish care is of absolute paramount importance to any dedicated sport fisherman these days. 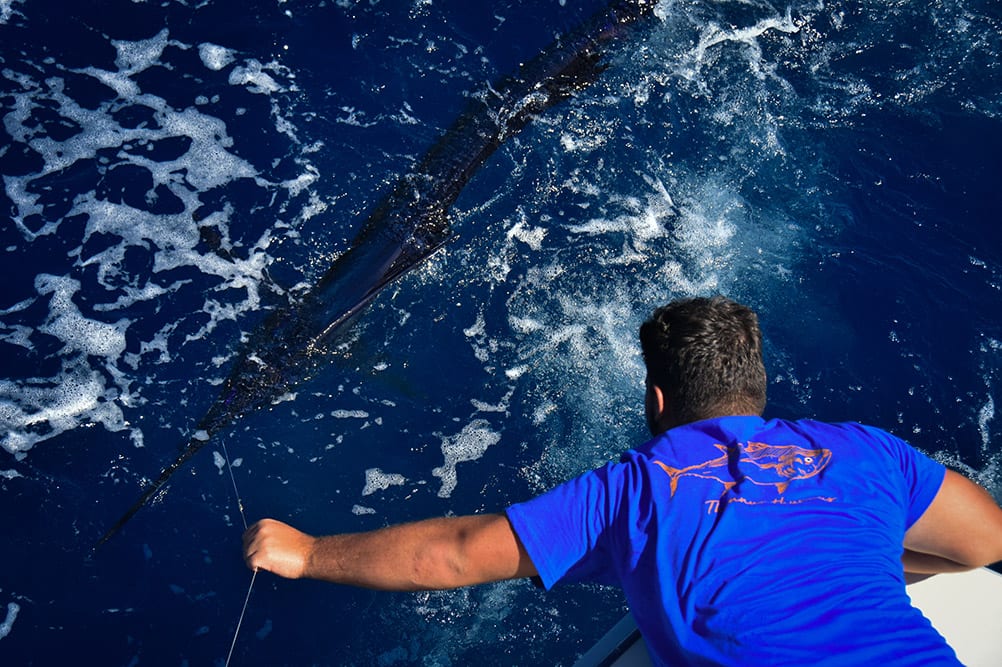 Just 3 minutes after the first bite, we get another one, another sailfish, another adrenaline fuelled fight!

After 2 hours of trolling on the canyon, we see a sailfish jumping in the air along with lots of birds flying in a circle, so we run to the spot and we see there are plenty of them, the water is full of sailfish! Seeing one or two can amount to a good day, seeing this many is a real red letter occasion.

Without any time wasted, the lines were in the water and…TRIPLE STRIKE! Great! All the anglers and crew are now fighting the fish as a team. With many acrobatic jumps, the danger of entangling the lines, and the awesome ability of the experienced Captain, we eventually bring all of them close to the boat and we pull the hooks. A success!

The day goes on like this, hours of nothing with moments of fun and adrenaline. That is fishing, and is certainly the expectations of big game sport fishing!

We then end the day with two dolphin fish, one yellowfin tuna, and 9 sailfish (all released).

During the evening time, we enjoy a very good seafood based dinner with mahi-mahi and tuna steaks and we talk about the great day we had. Our bodies are destroyed, our hands are full of cuts and scars, but we are happy, we are satisfied, this is what we live for! 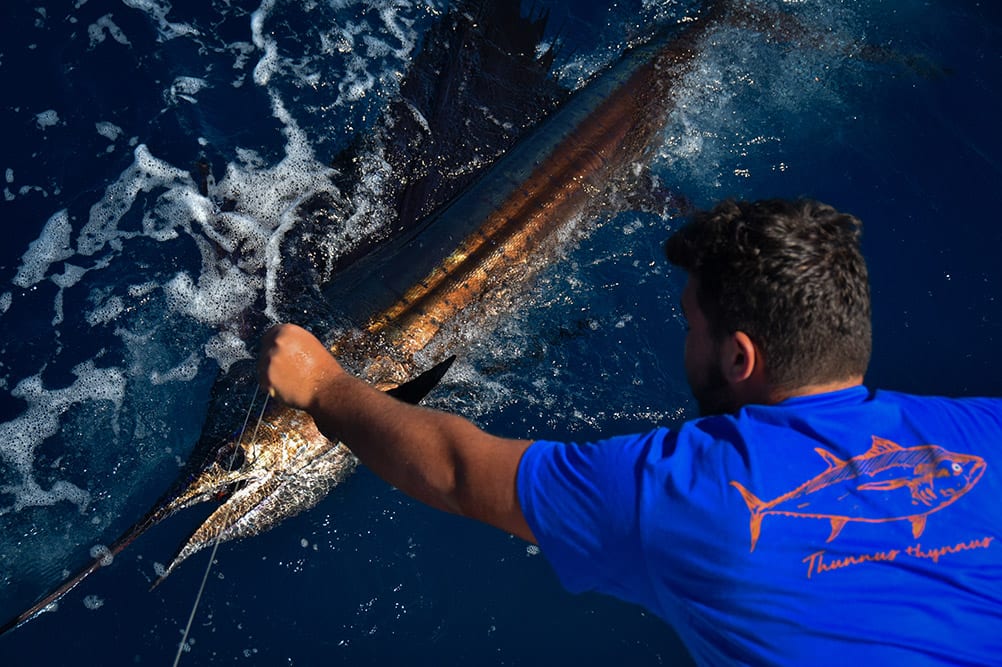 A fisherman is not a normal human being, a fisherman is someone who is strictly connected to the water, a person who is all about conservation and nature. Fishing is teamwork, fishing is life, and this puts a big smile on my face.

Our adventure may be at an end, but I take with me the hope to come back very soon to the wonderful waters of Guanacaste, Costa Rica: a place I will keep forever in my mind and heart.

We will always remember…”That time in Costa Rica”. 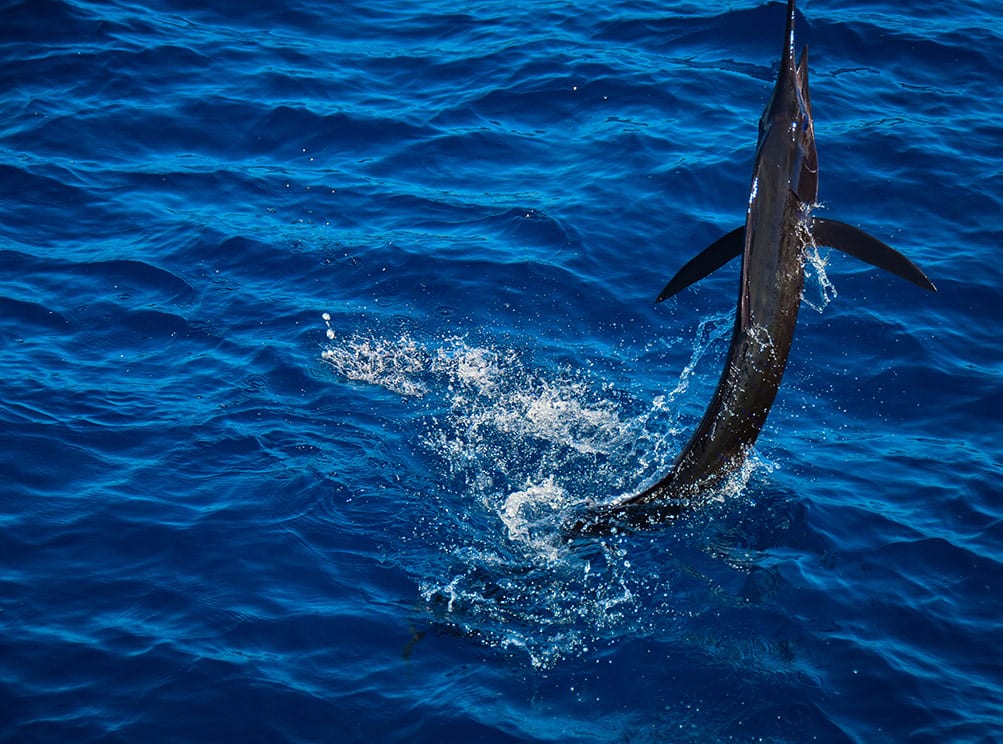