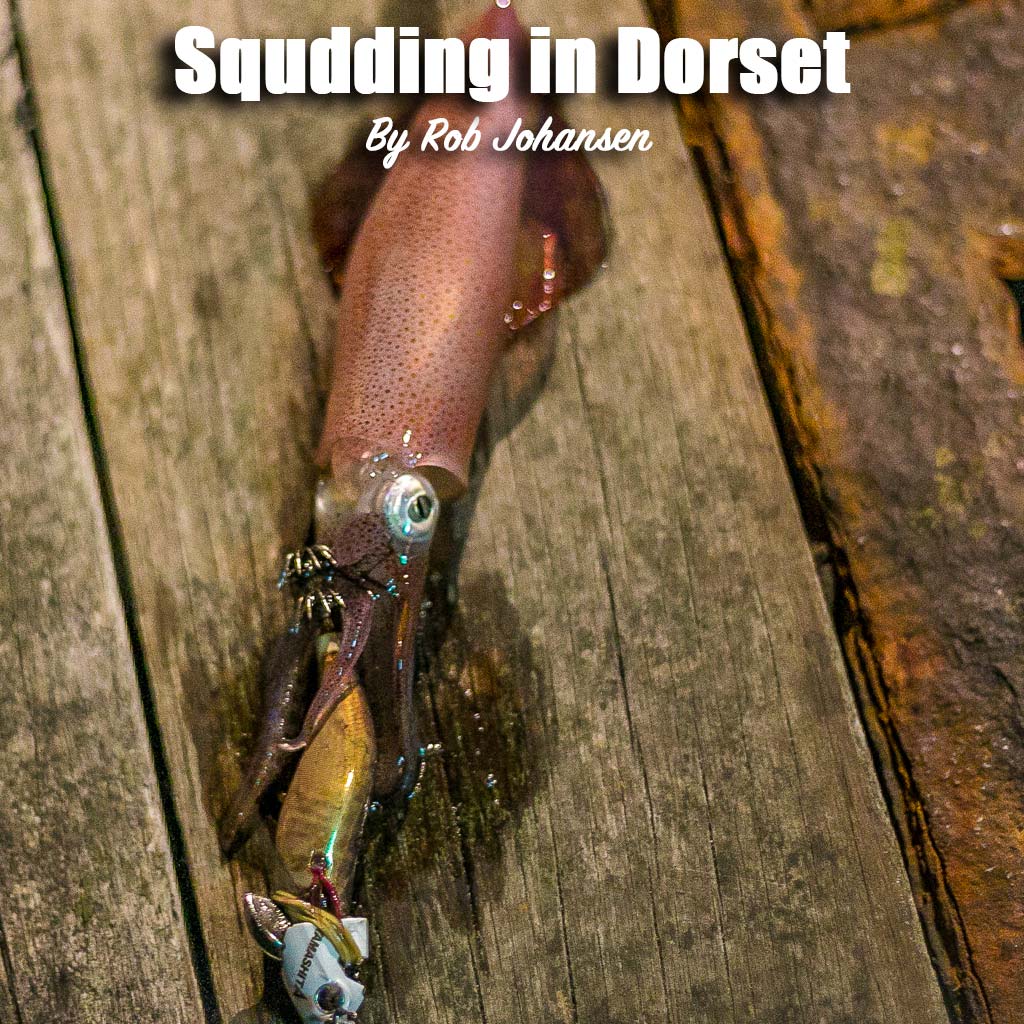 Having been into lure fishing for well over a decade it only makes sense to try for all species that can be caught using these techniques. For the last 4 to 5 years I’ve been targeting squid when in season and at the right locations. On the Dorset coastline there can be a spring run but numbers aren’t generally that great and it is very hit and miss with the weather. The main squid season can then start as early as August with the smaller ones turning up in low numbers. This can run on all the way to January, the later in the season you go the bigger and better numbers that are generally in, with the best months being October / November. However this is all weather dependent and usually turns on and off with every low pressure that passes.

With September kicking in and having had fairly calm seas I knew it would be worth a session or two to see what was about. The better conditions are gin clear water as squid are sight feeders and the murkier the water the less chance you have of catching them. When the water is really stirred up they push off out into deeper water, as they struggle to find food and would be an easy target for larger predators. Either way I’ve never caught one in really stirred up water and it is not for the lack of trying. 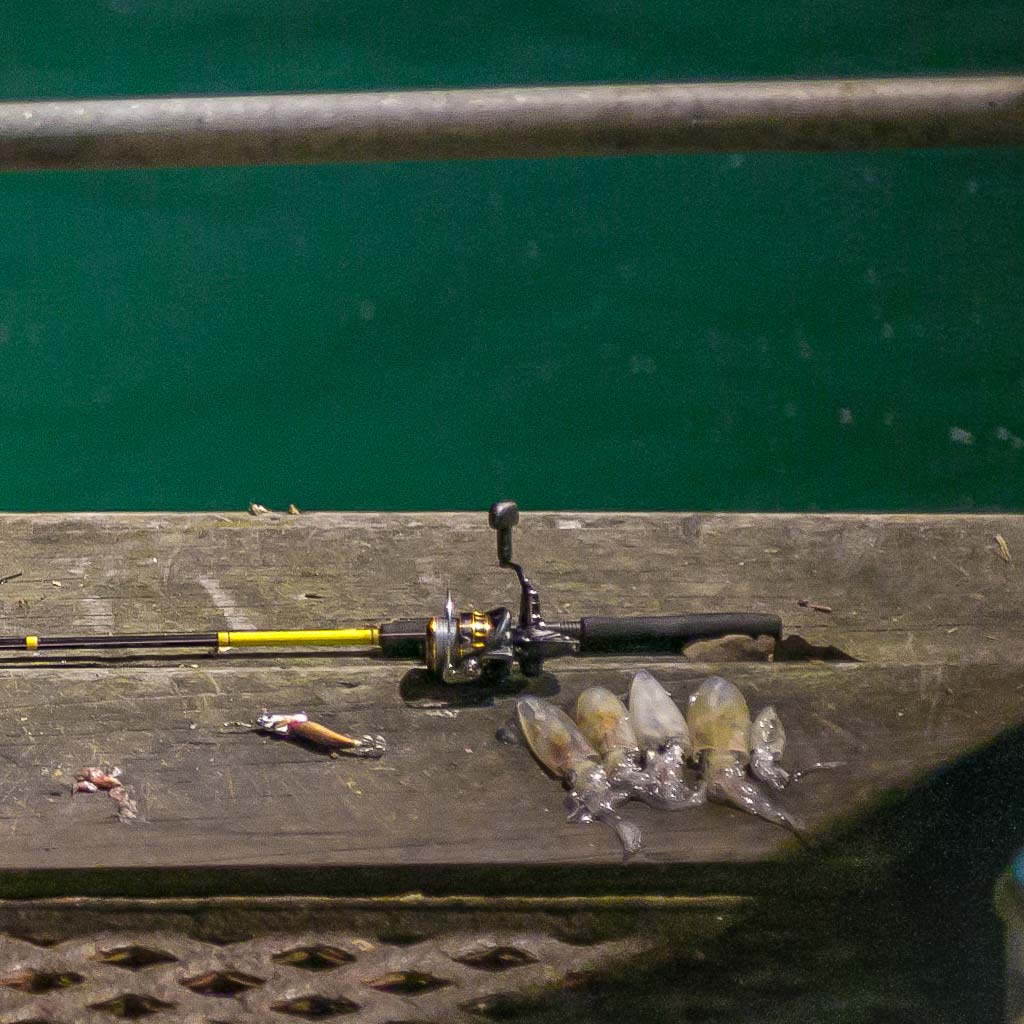 Previously I’ve just used my lure fishing set up that I take out for bass, pollack and mackerel but as the years have passed I now only use the most sensitive rods I own. This helps more at the start of the season when we are only getting squid 4 to 8 inches long. 15lb braid for sensitivity and a short rubbing leader of roughly 2ft then a small link for quick change of Jigs. There are a great variety of jigs out there. A lot depends on budget but my experience is the Yamashita warm jackets have out performed in most (not all) circumstances but they do have a hefty price tag attached. Other jigs out there glow, rattle or a combination of both which I’ve had mixed results with. A great way to charge the glowing ones up is with a UV light. The colours they come in are always worth noting with what conditions you are fishing.

Online there are plenty of charts explaining what colours to use depending on level of feeding activity and water clarity. So as time goes by it is worth building up a variety of colours and sizes. An easy start would be the jigs around 2.5 size and colours for clear water, your blues and browns.  If squidding in naturally lit areas I like to add a 1 ½ inch light stick, a foot above the jig. This attracts squid from further afield and once in closer they spot the jig then hit that. 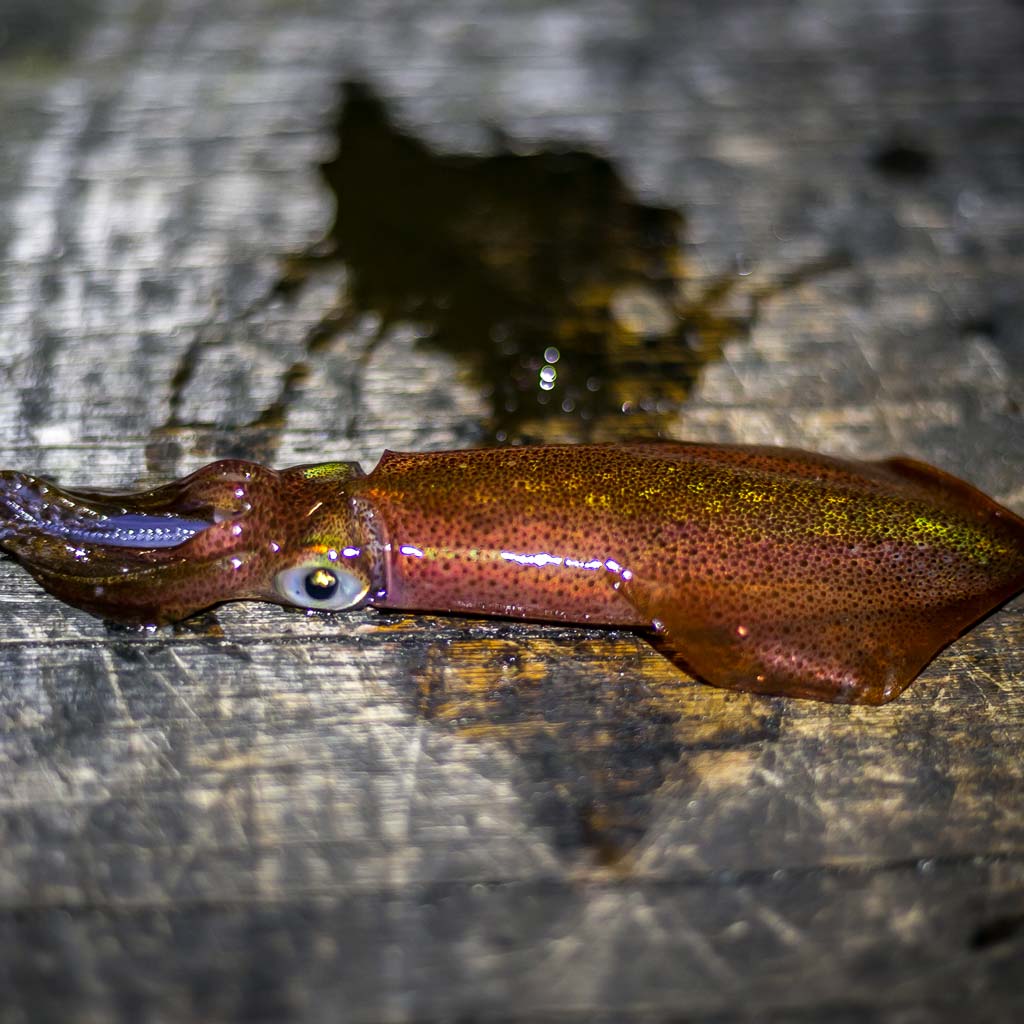 Having not heard of any reports of them being caught, my plan was to head to the most likely areas they would be in for early in the season. Areas like piers, harbour walls and where an abundance of small baitfish, prawns and crabs are likely and somewhere that has a tidal run. Natural light is ideal but shining your head torch on the water momentarily will spook them like other fish. It is worth noting here that natural light is not essential. You will catch them in the pitch black as I have done many times.

I headed to a well-known location. There were plenty of people bait fishing but no one squidding. After about an hour of casting a couple of different jigs, I felt a slightly heavier weight on the end. Was it just weed or could it be my first squid of the season? Feeling no pulses of a squid trying to escape I thought more than likely it would be weed on the end but as it came to the surface it finally jetted water and ink everywhere. Lifting it onto dry land I could see this thing was only just bigger than the jig. It’s got some balls to be attacking and trying to eat something only just bigger than itself! Well, perfect bait size and off the mark for me on the first attempt. There seemed to be a steady flow after that for the next couple of hours and thankfully that first one turned out to be the smallest. With varying techniques to be used to cover each level of the water column I mixed it up as much as I could and no depth was any more successful than the other. 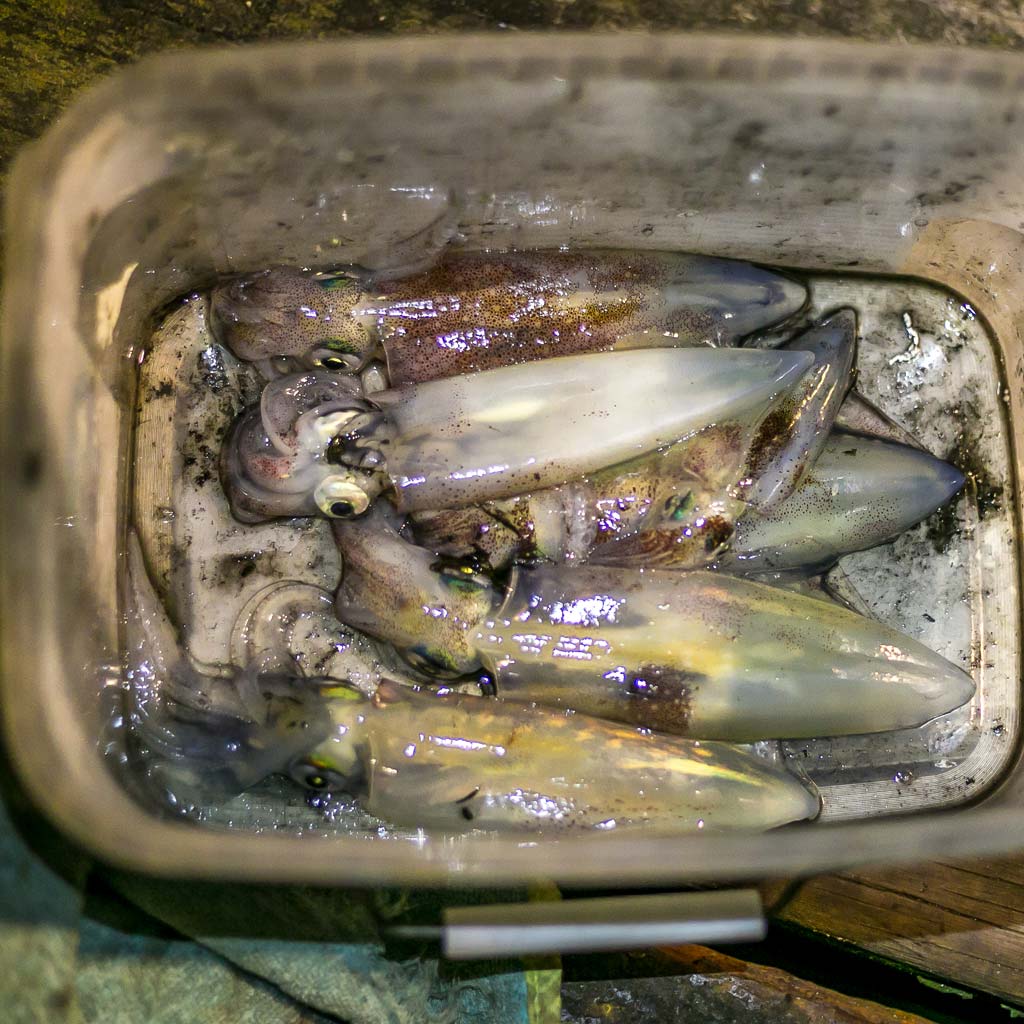 Other techniques are to leave a sleeper rod with a float and a jig or two beneath it moving in the waves. Squid generally move around in numbers and once one shows signs of panic others can attack it but on the same note its attracts them in so the second jig will pick them up as well. Once a group of us were fishing a breakwater for them, one person hooked up and the rest of us dropped our jigs in close proximity.  We all hooked up, including the sleeper rods leaving a couple of people with a rod in either hand. This was later in the year and all a decent size where a drop net was essential. The jigs can also be switched for bait, half a fish is good, with a metal needle through it leaving the same spikes as a jig at the bottom. A word of warning on this one is, as you would expect, anything could take it!

Throughout the week I did several sessions of 2 to 3 hours at a time and generally having numbers into the low teens with the first session being the best at a staggering 18. A great start to the season but as the week went on the last one proved to be the worst, only catching one but still great to be getting out trying. Being such a great bait and easy to cook its hard to decide what to do with them. Unfortunately for my winter bait freezer, being able to get as many fishing passes authorised by my wife as I did, more had to be eaten than frozen. 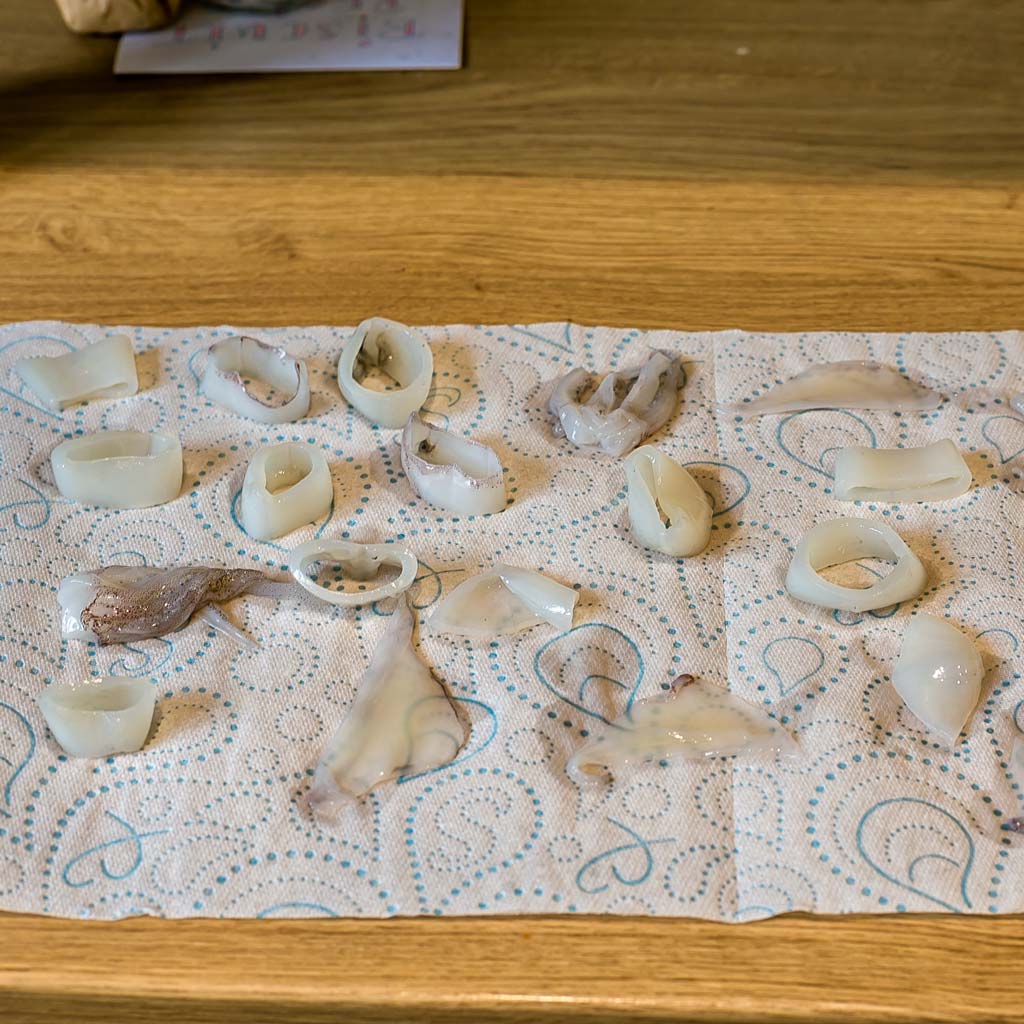 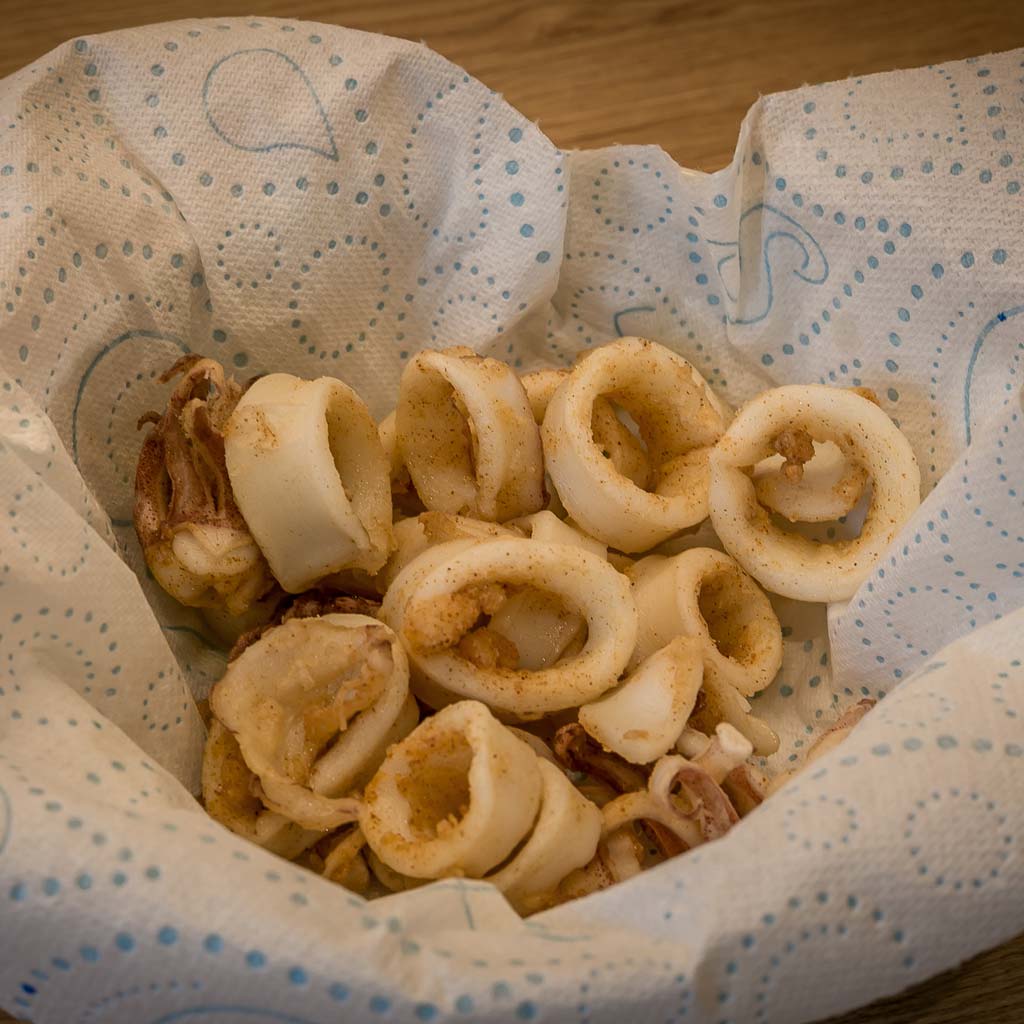 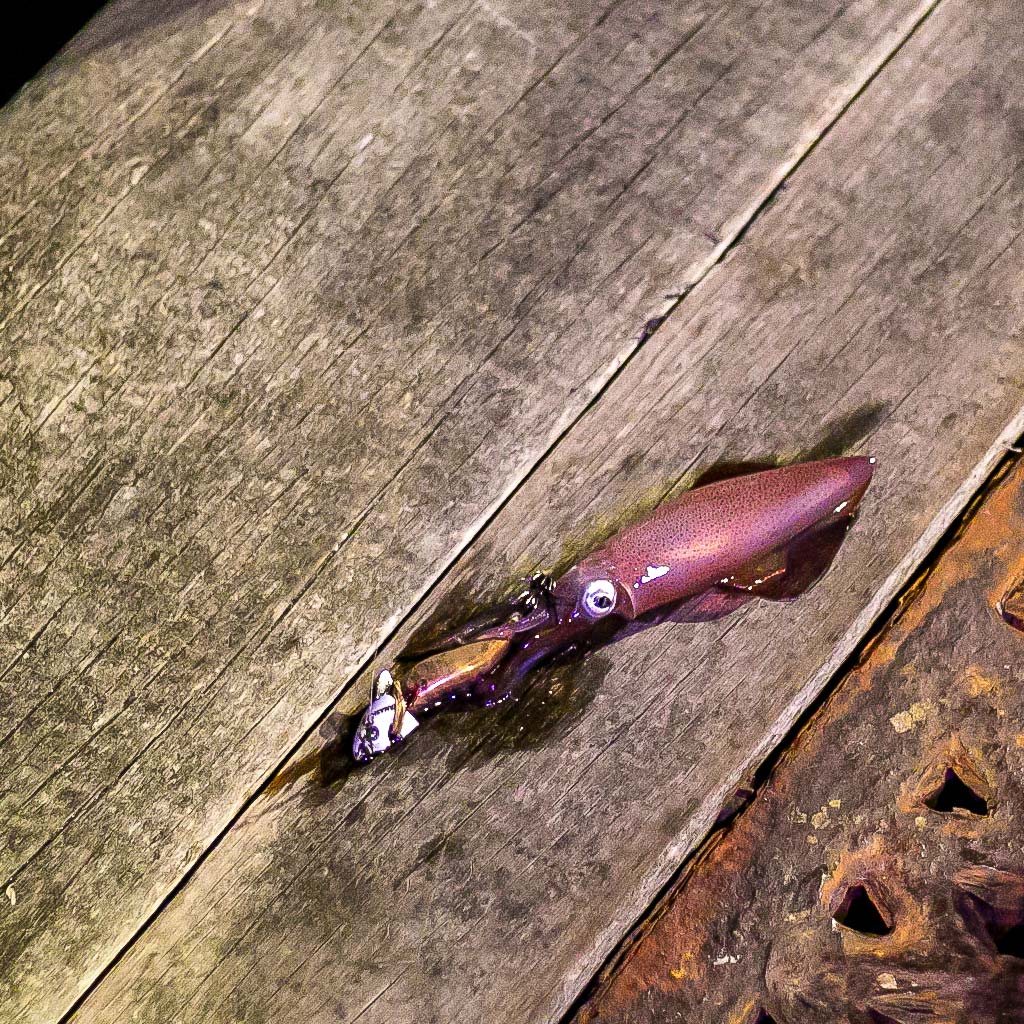