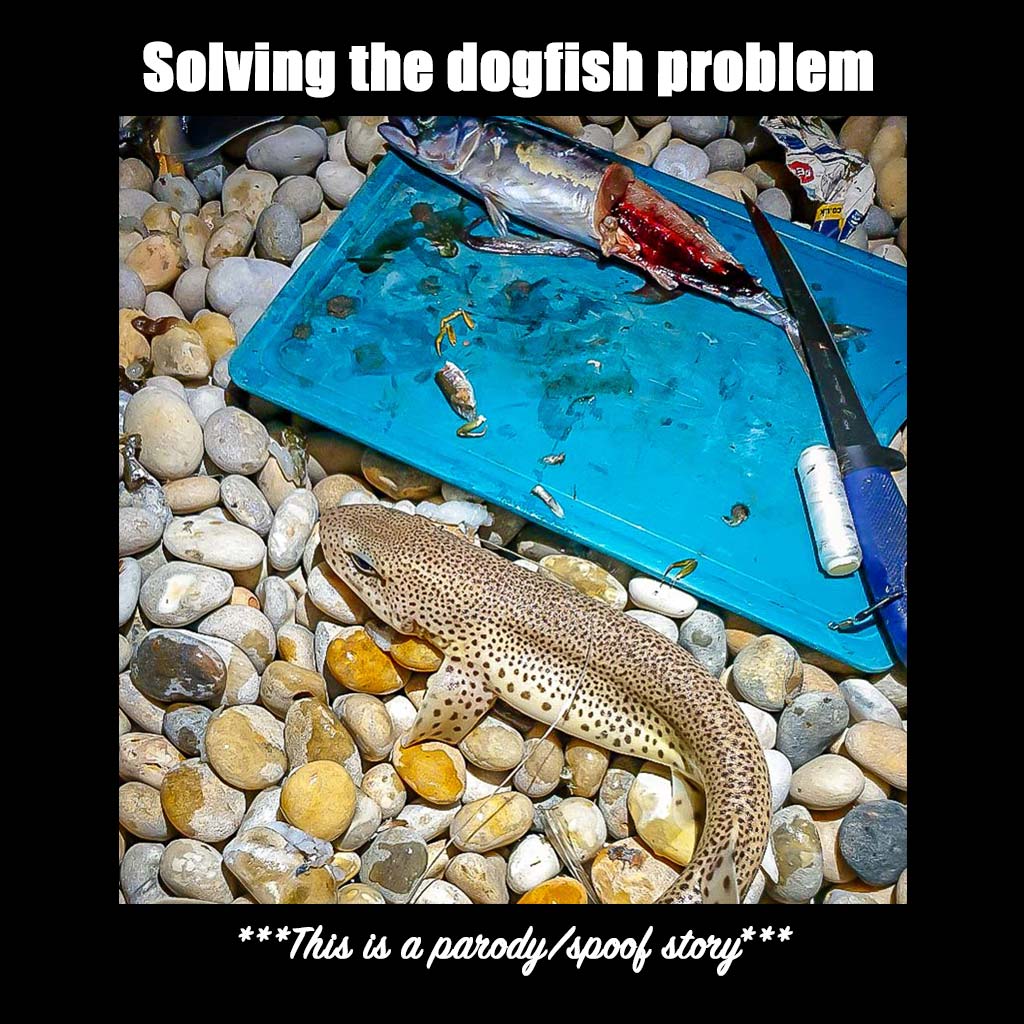 Anglers across the south of the UK have got together to finally solve the burning problem of endless hordes of dogfish littering the seabeds of every mark they fish. The issue had really come to a head when local top rod, Dave, insisted he’d no doubt have broken at least three species of ray records recently, without even giving them a soak, if it weren’t for the dogfish getting to his baits first.

After years of head scratching and it transpiring that Boris’ deal to leave the EU didn’t come with a built in re-stocking programme for our favoured species, there was a desire for a quicker solution than the current status quo, which had been to rely on global warming bringing bigger sharks to our coasts that would eat the lesser spotted pests.

We managed an interview with top rod Dave, which as it turns out is a self styled social media name and possibly not a general reflection on his angling skills. Regardless, he had this to say;

“It turns out Global Warming just isn’t happening fast enough. Every time we get excited that the waters warming up sufficiently for a few Hammerheads to show up and eat the pesky dogs, people start acting counter productively and we see fossil fuel use cut. It’s like people aren’t seeing the bigger picture. Maybe they’ve never spent 48 hours on Chesil only to catch 500 dogs and a 15cm pouting. It’s a chastening experience that really puts things into perspective.”

Top rod Dave believes he now has the answer though, and he is certain this one will succeed, unlike the failed 2017 plan of turning dogfish into vegans. Egged on by fellow anglers on Facebook, Dave has now commissioned 3 of the largest known commercial fishing boats in the world to target dogfish off the south of the UK. The boats are capable of hoovering up the fish in completely unparalleled numbers and they’ve already got to work.

One question we had for Dave was exactly how they would be paying for this exercise. After all, the cost of running such boats is going to rack up in to the tens of thousands for each week the plan is in action. In a show of strength for his plan, he’d already thought this aspect through.

“What we’ve done is agree not to keep any bass ourselves for a few months. That way, there’s enough left over for these large factory ships to catch as by-catch and cover their costs. It’s a real win win as we still get to catch the fish, we just put them back for the commercials rather than feeding them to our family”.

Pressed on how it is going so far, Dave said “Well I’ve blanked my last six sessions, not a single dogfish in sight, so it looks like they are doing an absolutely wonderful job!”

We were keen to get the view of those conducting this dogfish management programme too and were lucky enough to speak to one of the skippers, Phill Meenets. We pressed him on the viability of the exercise to them, and Phill was happy to oblige:

“Well it’s pretty crucial to us as well as it happens. These dogs just get in the way of the reports we rely on. People may think we spend hundreds of thousands of pounds on state of the art equipment for tracking down and monitoring the shoals of fish, but in reality I have the good woman back home glued to social media checking where top rod Dave had his last haul of ray. Its no good to us when all he’s doing is cussing about ‘dickfish’ week in week out.”

Unfortunately Phill wouldn’t allow us to look inside the thousands of boxes of fish they had already processed on the boat, for reasons of contamination apparently. He did however reassure us of the incredibly selective fishing techniques employed by the miles of nets these days and that these measures ensured they would only catch dogfish, with a little profitable by-catch of course, just to fund the operation.

So there we have it, will the curse of the dogfish be abated by Dave’s cunning plan?