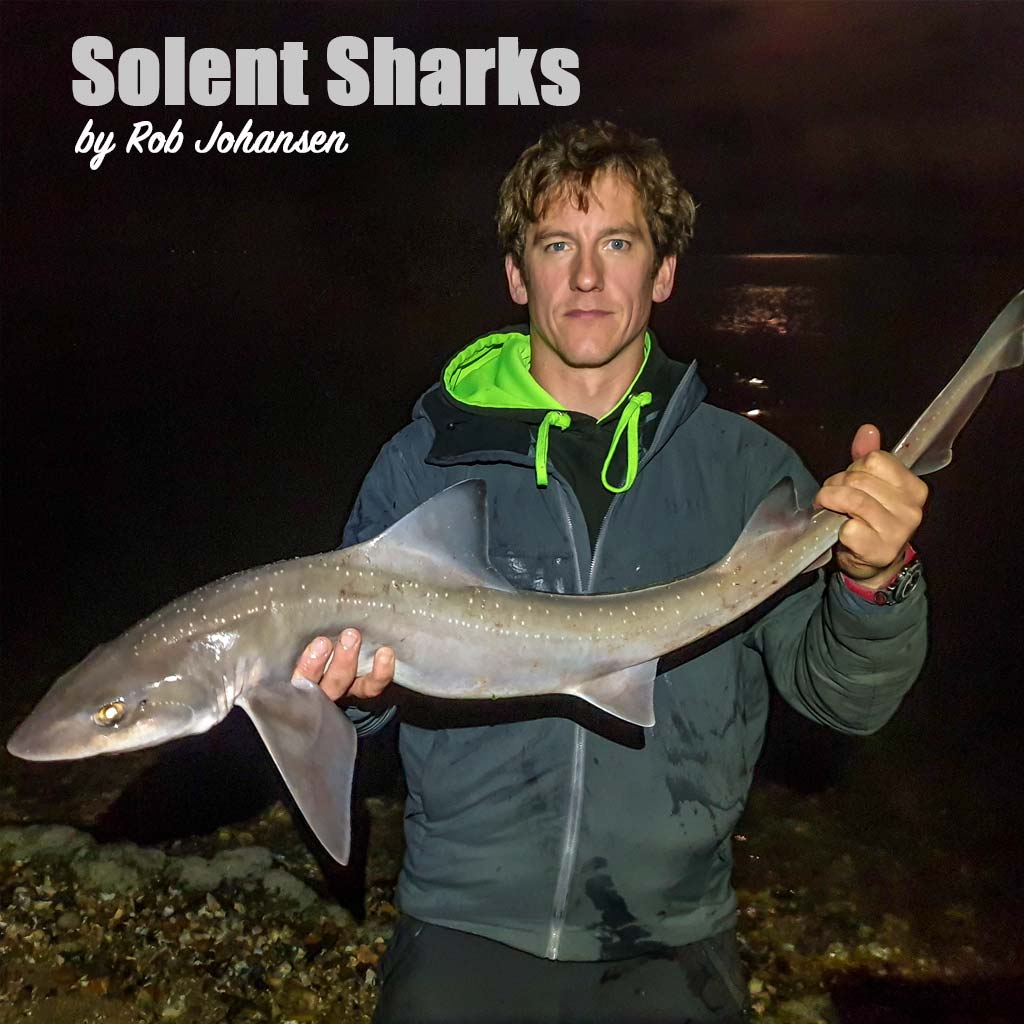 It’s that time of year when smooth hound are due in. May and June always being better months for the bigger ones. The odd report had shown it wasn’t completely dead, so Rob Stammas waited for the right tides to have a solo session on a familiar mark for them in the Solent. It was a session that turned out to be exactly what he was after. With a total of 15 hounds up to 14lb 10oz, a personal best for him, it proved to be the perfect session. Out of these 15 toothless solent sharks, there were 6 double figure hounds, very impressive in my books. Letting a close friend know the details, he tried the following night and had similar results.  I just had to somehow clear the diary to try myself. Yes it is chasing reports but, more importantly, it’s going to an area that we know the species is in. In numbers too.

Rob hadn’t planned on fishing again for a few nights. Funnily enough though, he didn’t need much persuading to head back out, not after that last session. This was great news for me having never fished this mark. Having someone experienced in a new venue can’t be beaten. Plus, it’s a bit of company, competition and banter.

We initially met at the beach to dig rag worm. It’s a great bait for the hounds and can, if you’re lucky, tempt a stingray. After an hour worth of digging there was plenty of bait for the session. A few rocks were moved for hardbacks and I also brought some frozen peelers I’d collected earlier in the month. Rob had to collect some gardening tools for the following days work so we choose to both drive.  Going through Hampshire the scenery was stunning, with large open areas of farmland and greenery.  The fresh air instantly makes you feel healthy and revitalised. Though maybe I was just excited to get out to go fishing and get amongst the solent sharks! I got there slightly earlier from a pin he had dropped on the map. This gave me a chance to see the area in daylight, which is always nice for a new venue. I set up and managed to have one cast before Rob joined me. Two rods were out, one with several rag worms and the other with peelers. 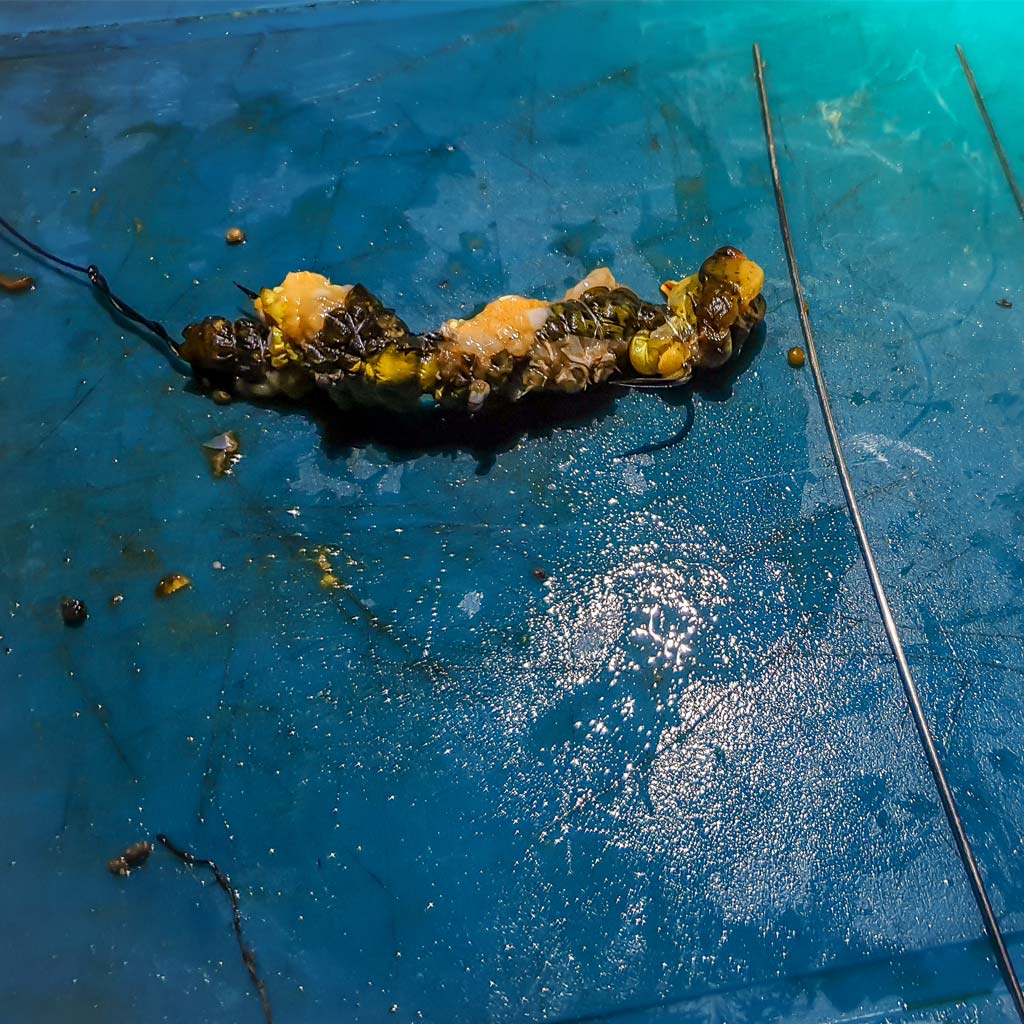 The crabs were out in force, as expected, stripping worm baits in a few minutes. That was the nice thing about having a crab bait on a second rod. They tend to get left alone so we weren’t on an all-out baiting up frenzy. My first cast resulted in some very small quick rattles that resulted in a school bass of half a pound. The next couple of hours we were just fattening up the crabs. Then the hooks started coming back with a few worms on. This was a great sign. When the crabs hunker down, there are predators in the area! Then it happened, Rob had a screaming reel, by the time he picked it up, the bait had been dropped and it didn’t return. Not a great start but if it is anything like the last two nights then there will be plenty more. One thing to note is that when targeting hounds, set your reel drag low. These fish can scream off. A decent one could easily pull your rod rest over or god forbid take a rod in!

After that first missed bite, Rob then had another. This time it was properly hooked and gave a decent account for itself. I ran over and got a bit of video. The reason it fought so hard was it was also tangled in his line and had turned around and he was dragging it in backwards! This was followed by another one putting him two in front in very little time.  Rob then missed another.  Me only being 20 yards away with no hound bites, started to question everything Rob was doing different to me. As it turns out, we were fishing pretty much identically. Up and over rigs, crab on one rod and rag on the other. The up and overs ranged from 4 to roughly 6 foot in length with 4/0 pennel hooks on. One rod long and one rod short, mixing the ranges up a little. 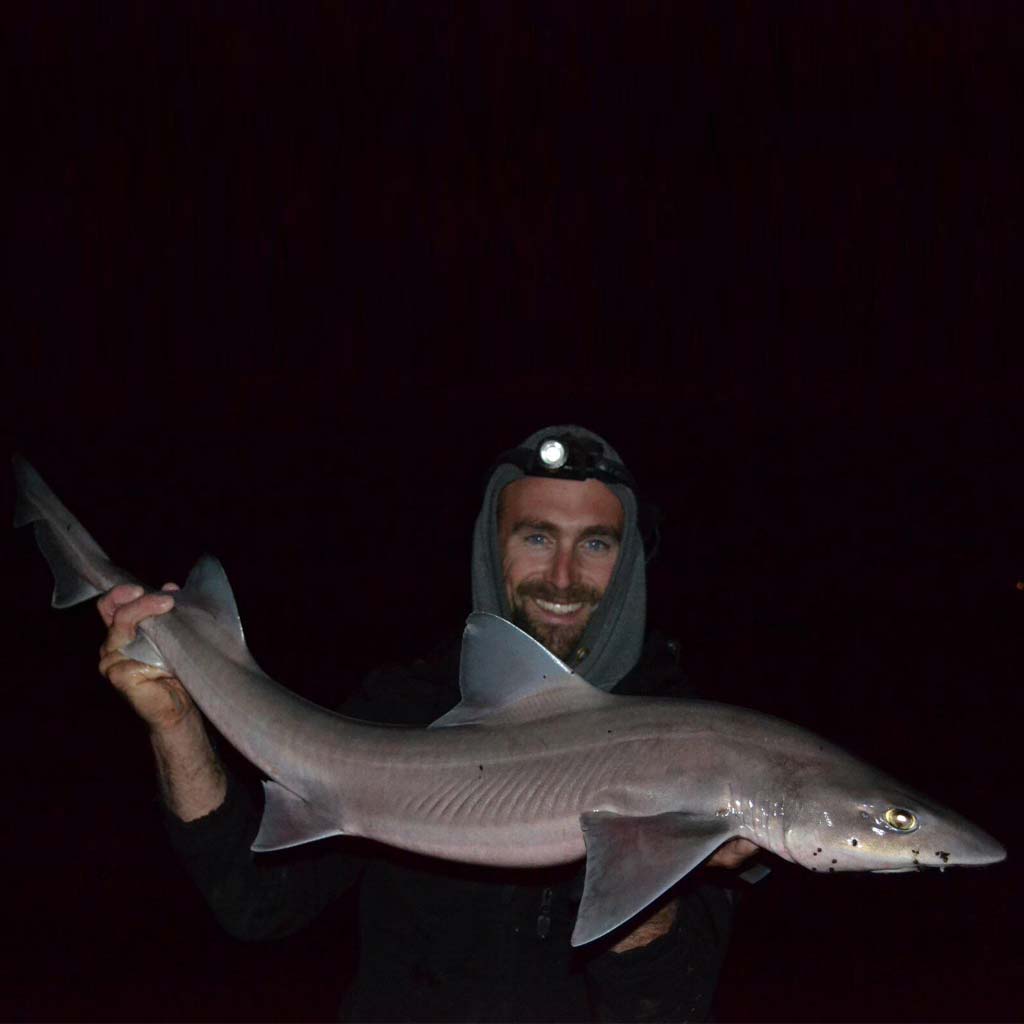 45 minutes after Robs first hound, I noticed my rod tip nodding. Not what I would associate with a hound but with long up and over rigs it could be just picking up the bait. I lifted the rod and immediately started to get slack lined, reeling in as fast as I could, it then changed direction and started to pull away from me! Then, just like Robs first one it gave a really good account for itself. Pulling down hard and thrashing on the surface some way out. This first one was also tangled in the line, making me pull it in tail first. Weighing in at 9lb 15oz being just a tad off being a double, I was very pleased to be off the mark with this great fish. This first one was very short and heavily pregnant, so I was quicker than normal to get her back in to swim off on her way.  What’s interesting is a lot of these hounds, once released, seem disorientated. They swim back to shore soon after release or will stay on the surface until some distance out.  Because of this they can beach themselves later and it can be essential to check the shoreline to ensure this hasn’t happened or as the tide moves out they are left stranded.  Generally, once the hounds are in, large numbers of them can be caught, so potentially you could have several hounds beached along the shore in close proximity to you.

Over the next three hours there was a steady flow of hounds coming in. It didn’t get as hectic as how Rob had it a couple of nights before but, it was enough to keep us busy with a fish every 15 – 20 minutes. Sometimes it was two rods going at the same time. I had a total of 5 hounds, 2 of them were 9lb 15oz. These 2 were very distinctly different with the second being very long and slender compared to the first short heavily pregnant one. Rob had a total of 7 with 2 into double figures. The biggest of the night, neither of us would claim. Rob had a bite and struck in to it, his line parted at the rod tip. With me being down tide, it didn’t take long for me to have what looked like a bite. I struck into it and reeled in to see his braid wrapped around my rig. Before I could pull in his braid, my other rod was going, so I switch straight on to that. My second rod was wound in to find his rigged wrapped around mine. Fish in hand, it was quite clear Rob’s hooks were in its mouth.  As it didn’t take my bait, I just couldn’t claim it. Rob said there is no way he could claim this 11lb hound, even though his hooks were in its mouth. Who’s fish do you think it is? Its on the beach and neither of us put a claim to it. Was it my double and sixth fish of the night? Not in my mind it wasn’t. 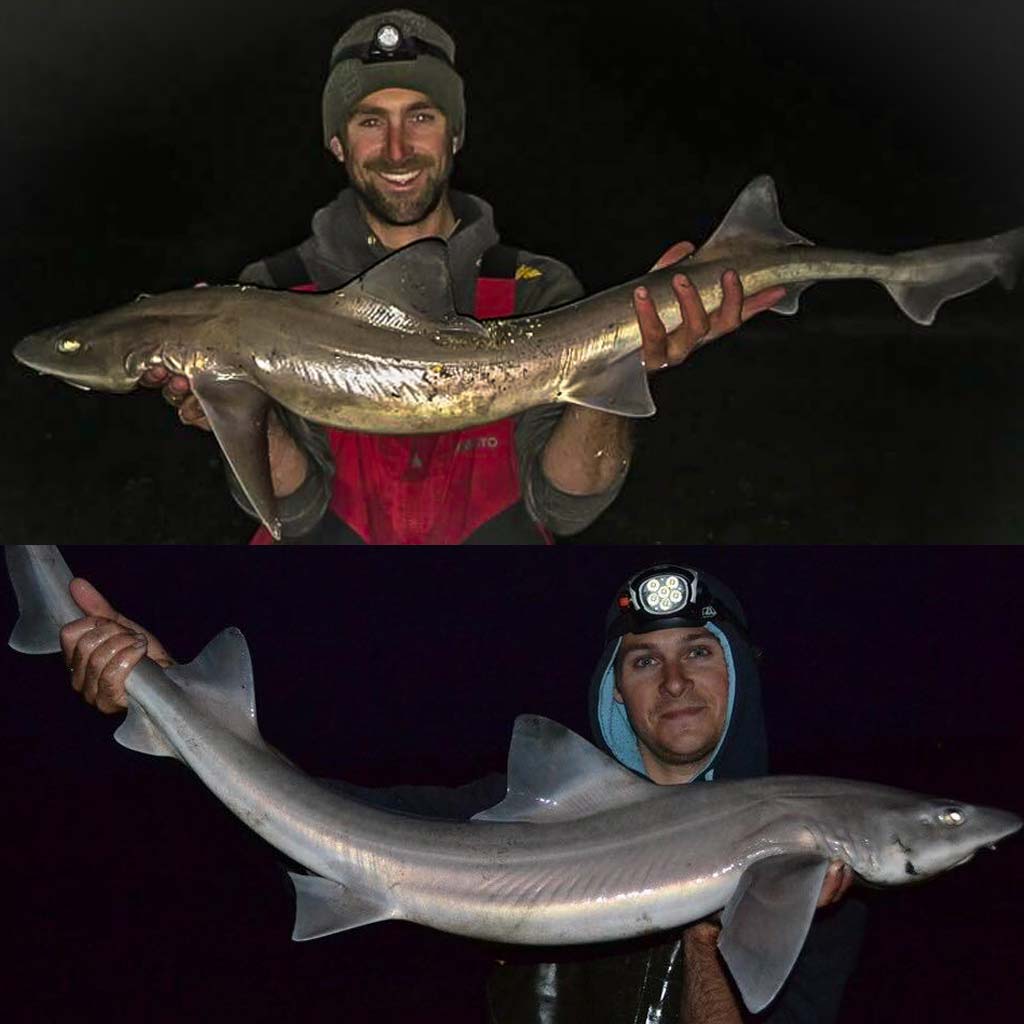 It was strange how this nights fishing seemed to be more of a spread out pack of smaller hounds compared to the previous 2 nights, but I suppose that’s fishing for you. Certainly a great session for me to experience the hounds in packs, roll on those next lot of tides when we can land a few more of these solent sharks! 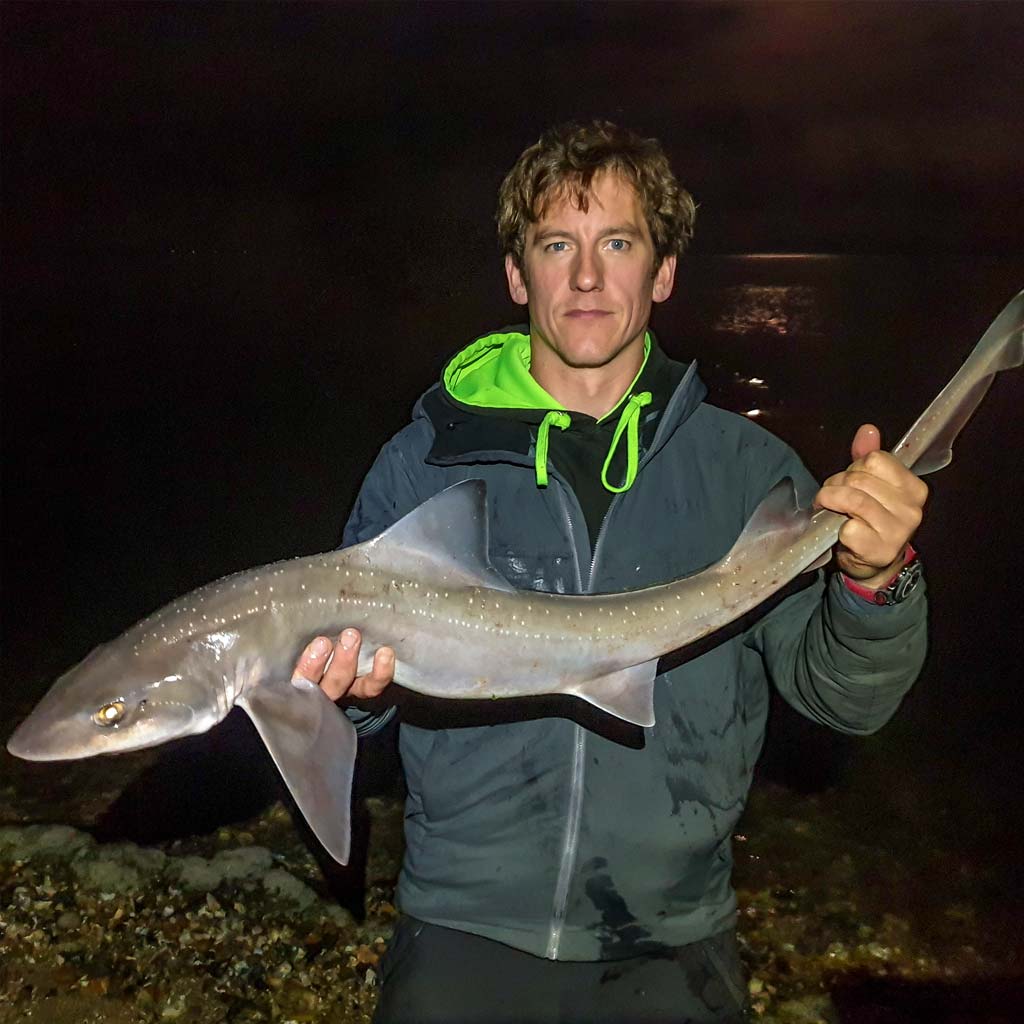 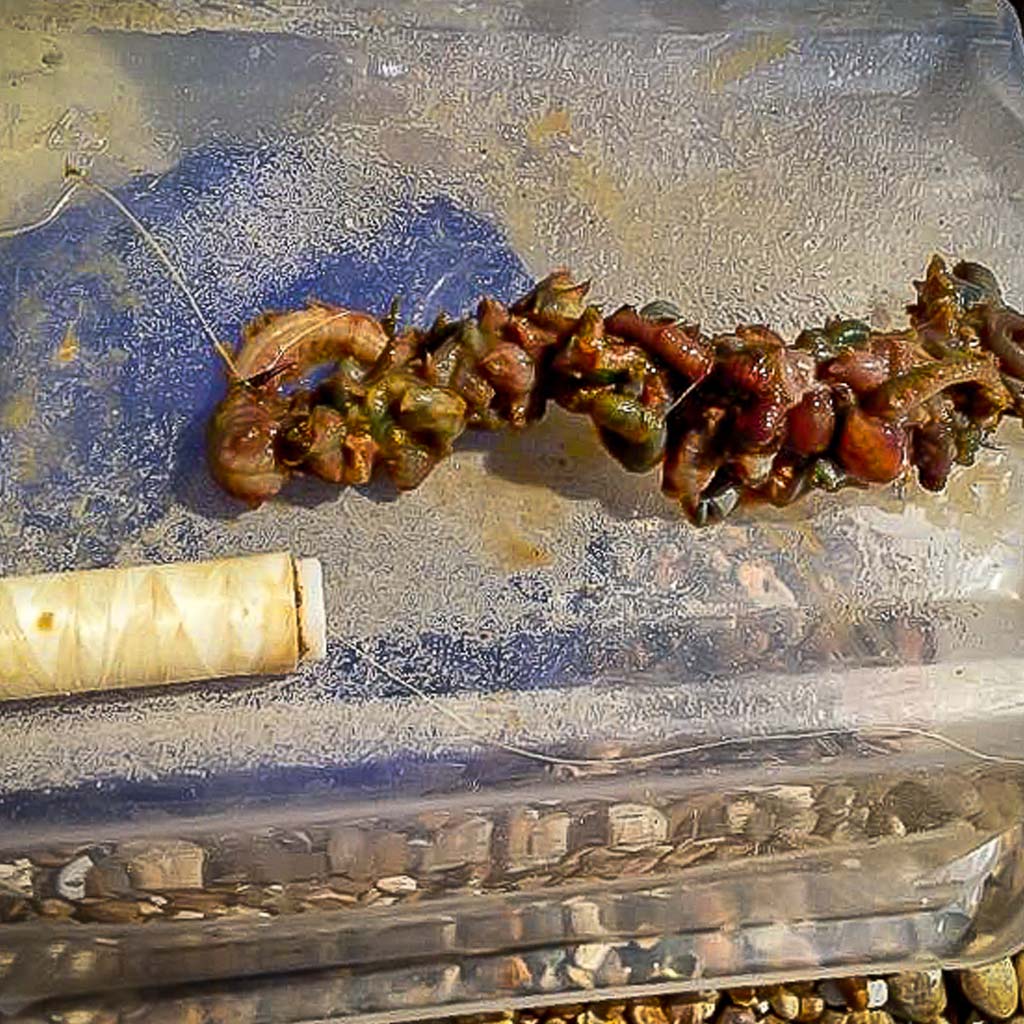 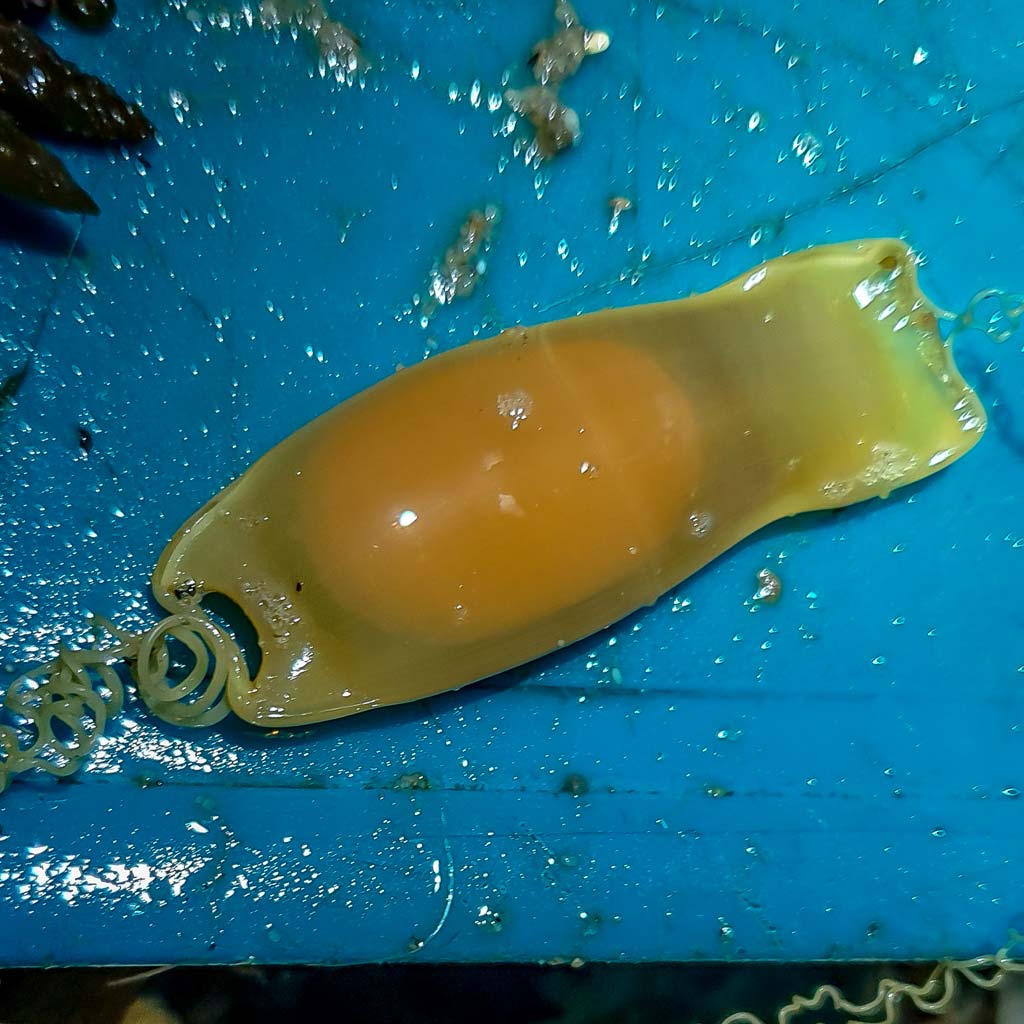 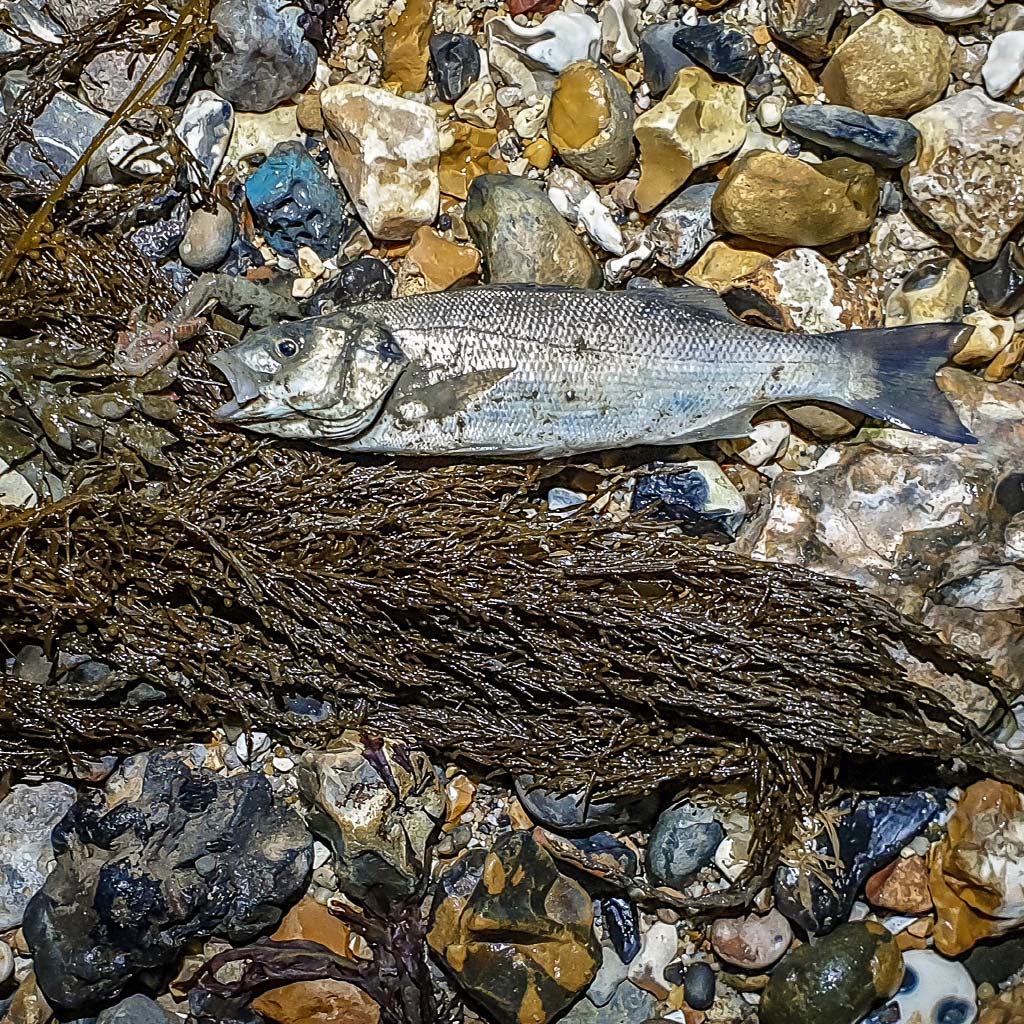 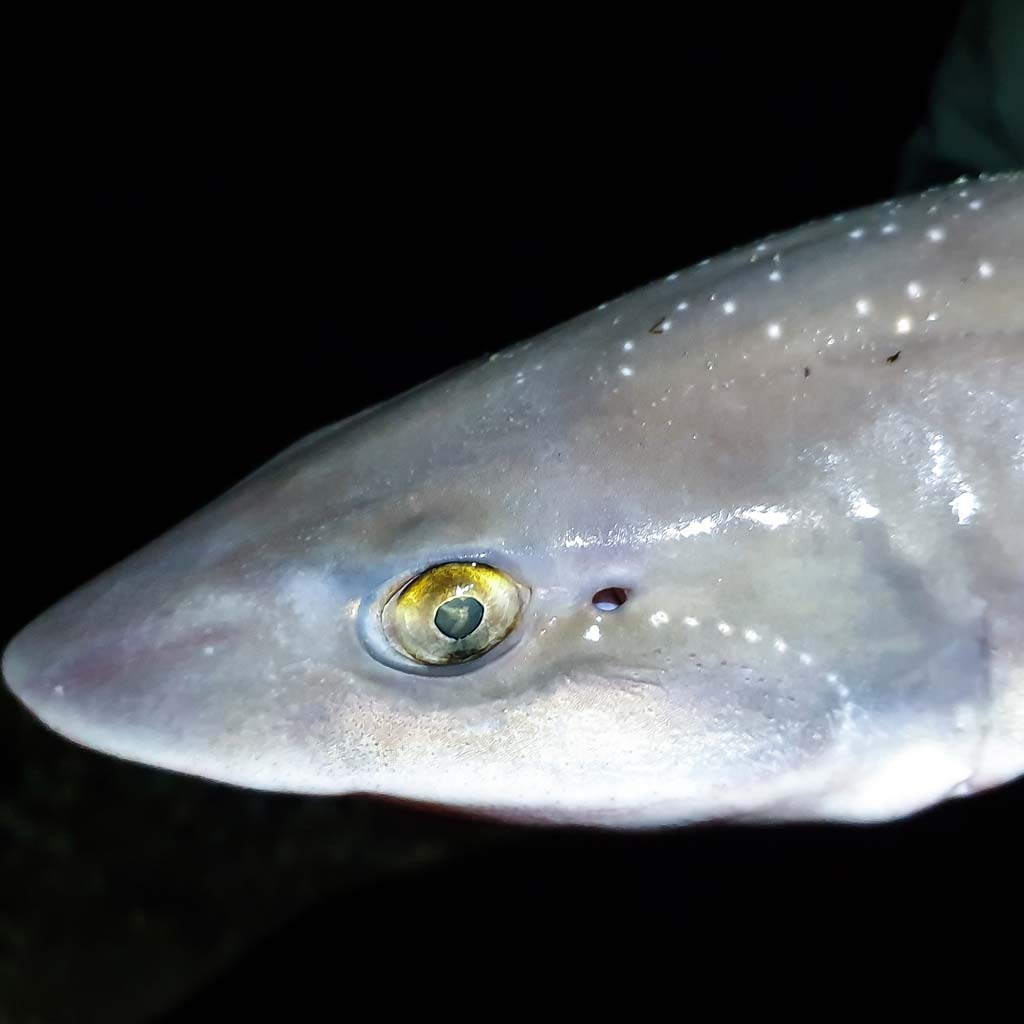