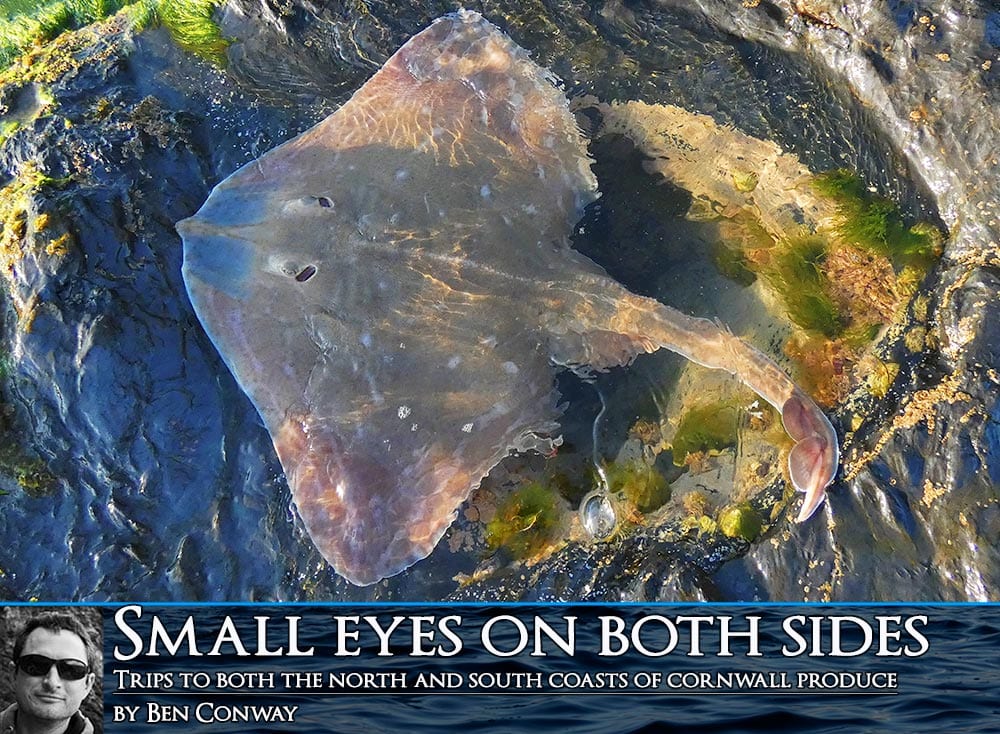 The small eyed ray is a big favourite with Cornish shore anglers. Back in the ’80s and ’90s, Cornwall undoubtedly offered some of the best (if not THE best) small eye fishing in the country. Dotted along its north coast were a series of marks that acted like magnets to anglers from around the county and beyond. If you were lucky enough to find a space on one of these spots on a good tide, you could expect gold standard ray fishing. To further sweeten the pot, some of these spots also offered spotted ray with every chance of a specimen. The craggy shoreline was a ray angler’s paradise.

The decline of the ray fishing on the north coast of Cornwall has left an empty space in the lives of many of its shore anglers. Fortunately, the south coast has retained a worthwhile proportion of its population (including some very big fish) but the north has struggled for some years. The situation has gotten so bad recently that I only heard of a handful caught last year.

Perhaps the saddest thing for me as an angler is that some of these famous old marks are very beautiful and great fun to fish. Without much reason to visit them, however, they are often neglected – even on tides that decades ago would have seen them bristling with the latest carbon fibre.

Recent news on the grapevine, however, pointed to things beginning to look a bit brighter. Reports of a few anglers catching some good mixed bags of ray, turbot and hounds on the north coast had others from around the county burning up their data trying to find out exactly where and when. Personally, I didn’t trust the rumours but I had genuine news that there were plenty of turbot to be had at a former A-list ray venue that I hadn’t visited for several years. Being a fan of these tasty flatfish, I penciled in this prospect for a future trip. 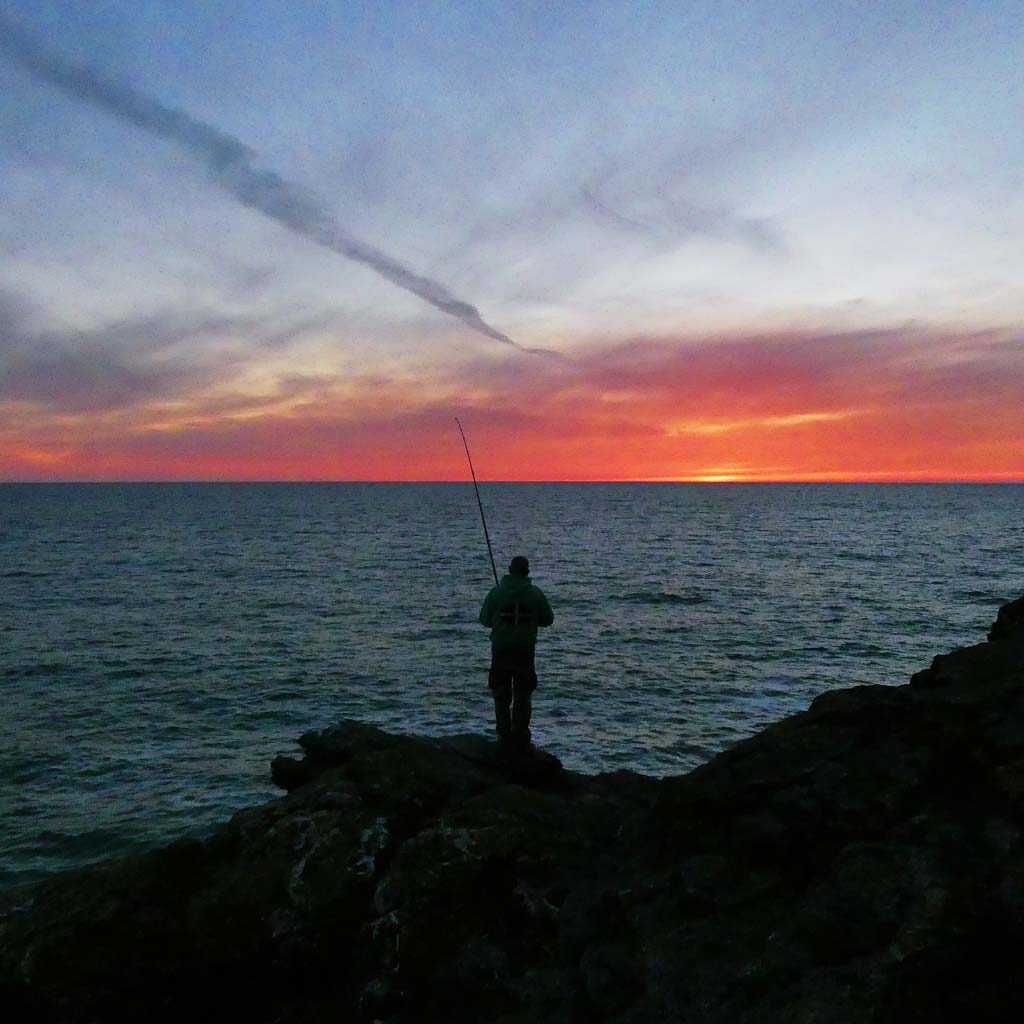 May is a great time of year for Cornish ray anglers. With the sun warming the shallows of the open coast, small eyes and spotteds swoop in to feed and drop their purses. For the last few years, it’s been the south coast that I’ve headed to in search of my ray fix and this May I saw no reason to stray from that pattern. With a week’s annual leave from work to play with, I was free to pick a couple of evenings to fish. My instinctive first choice was a favourite mark on the south shore that is generally reliable for producing small eyes of a good average size.

Joining me on this trip would be one of my regular fishing mates Mark Reed and our mutual friend Nick Blackburn. We arrived to the sight of a slightly choppy sea carrying odd patches of colour from suspended sand, a hangover from the recent unsettled weather. We started the session from a flat rock near the top of the cliff, all opting to stick to one rod until we could get down to the bottom platform and spread ourselves out a little more. My first sandeel bait soared out nicely, helped along by a tailwind and the fact that I was using fine braid.

My bait had been in the water no more than fifteen minutes when the rod pulled over steadily and the spool clicked softly as several feet of braid peeled off. Something was steadily making off with my eel and a lift of the rod saw me locked into a fighting fit ray.

This fish really put on a show, digging down hard for the bottom, kiting with the tide and using all the tricks in its armoury to escape. Its dogged resistance was strong enough for me to wonder if I might have fluked one of the real giants that Cornwall can sometimes produce. With this in mind, I coaxed the fish to the surface and carefully guided it to a flat rock far below where Mark was ready to meet it. Looking down, I could see that I would have to wait for another day to celebrate capturing a proper leviathan but it looked a nice fish nonetheless and comfortably into double figures.

I joined Mark down on the bottom platform and we carefully unhooked and weighed the fish before slipping her into a deep rockpool. At 10lbs 14oz, she represented a fine start to our evening and we were hopeful that this was just the beginning of a heavyweight haul. With that fish under our belts we decided that the bottom platform was now safe to fish from and set about spreading our offerings out in the tide. The hours passed by without a bite, however, and with the light fading the dreaded dogfish became rampant. With the best of the tide gone and with little incentive to press on through the pests, I packed up. I was happy with my fish, although I was disappointed there hadn’t been any for my friends. Hopefully the next session would be a different story. 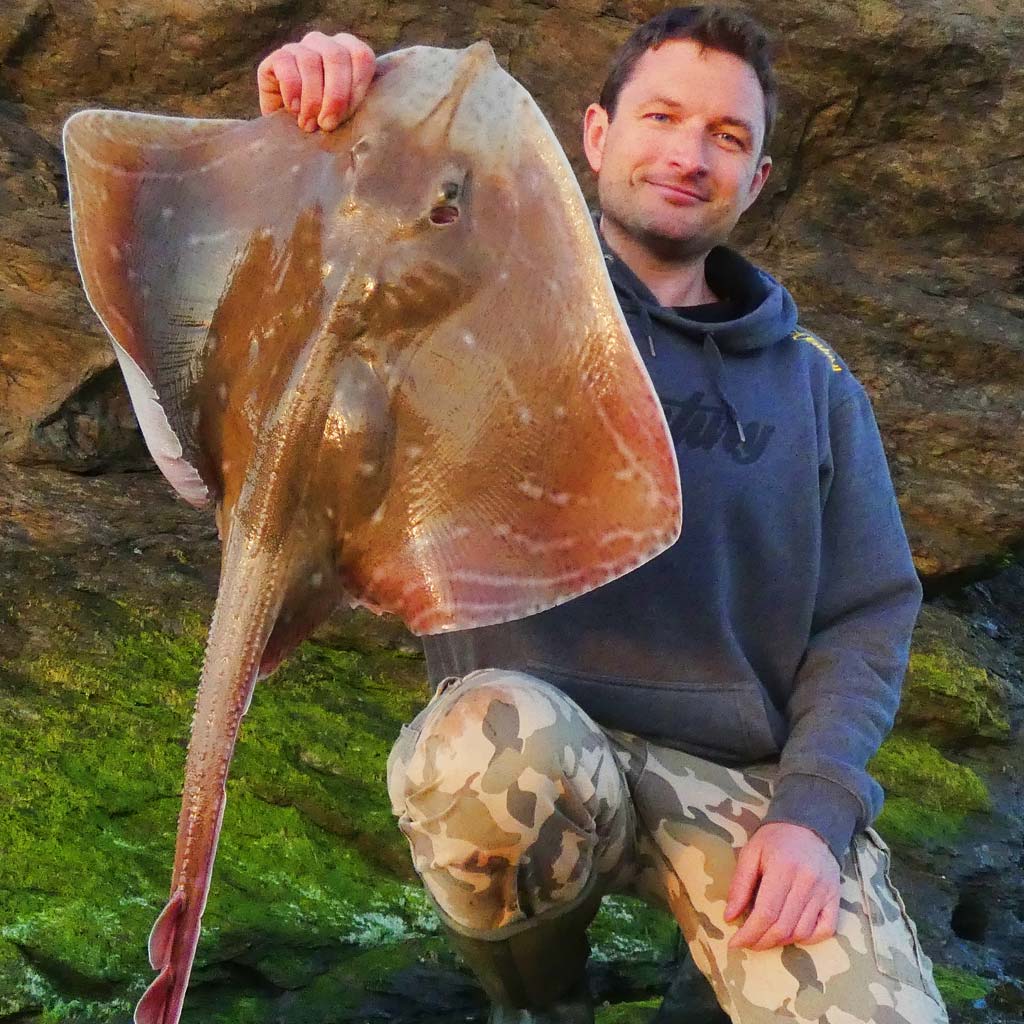 Not so grim up North

Mark was keen for a trip to the in-form north coast ray mark the next afternoon and with the promise of turbot, myself and Roy Moore were only too happy to join him. The sun beat down upon us but a stiff breeze from the north east kept the heat to tolerable levels. We all cast out sandeel baits, my own tipped with a little sliver of squid to add movement, and Roy busied himself trying to feather up a few mackerel for bait. The session had a fantastic leisurely vibe to it, no doubt helped by the fact that we’ve all fished with each other for years. It wasn’t long before jokes, jibes and vulgar humour started flying about and I frequently found myself creased up with laughter over something far too graphic to repeat! The leisurely pace meant that some time passed before I reeled in my first baits, having not seen a bite. I was delighted, however, to find that each bait had attracted the attention of a turbot.

From then on, I concentrated a little harder and we all found a few turbot each until the tide began to slow near high water. These weren’t fish of any great proportions but we managed a couple over a pound. The slack was dominated by the spider crabs who kept us cursing as they pinched their way through our baits. Roy had been fishing on the left and was having the leanest time of it out of the three of us, so he decided to move over to my right side. The tide had begun to ebb and after noticing Roy’s rod bent into a fish, I saw him disappear for a minute before coming back into view, climbing back up the rocks with a familiar shape in his hand. Roy’s intuitive move had paid off and he proudly presented a nice male small eye to us.

I’d anticipated the turbot feeding hard on the ebb but the action was still quite slow. With the sun dipping lower in the sky, however, I decided to devote one of my rods to trying to winkle out a hound or two. I’ve had poor luck with smoothies this year, failing to find them on three different trips to areas that would normally have been reliable enough. Having caught a decent ray the night before, I was happy to leave the small eyes for Roy and Mark and concentrate on the turbot and hounds.

It was Mark who had the first hound take, a cracking run that he was unlucky to miss. He was understandably frustrated and, being a good friend, I ribbed him mercilessly for it. ‘Wouldn’t you love it if I caught your fish?’ I shouted over to him before doing that exact thing. My rod stuttered over and kept on pulling as a smoothhound in the 6-7lbs category steamed off with my bait, giving me an excellent tussle before being landed by Roy. Given that my bait had been right next to Mark’s and we had no bites for some time either side of that fish, we concluded that I had indeed just caught the same fish he missed.

Mark is not one to suffer in silence when things aren’t going his way and he announced his intention of relocating to the area Roy was fishing in a bid to catch a ray. Leaving his hound rod over with me, Mark moved his other rods round to my right side and cast his fresh mackerel baits into the vicinity where Roy had caught his small eye. The next bite was Roy’s though, a fish that was almost certainly a decent ray that came adrift somewhere near the end of the fight. Talking over what had just happened, we heard Mark declare that he was in too and from the bend in his rod, it looked like a tidy fish. I quickly got into position to land whatever might appear. 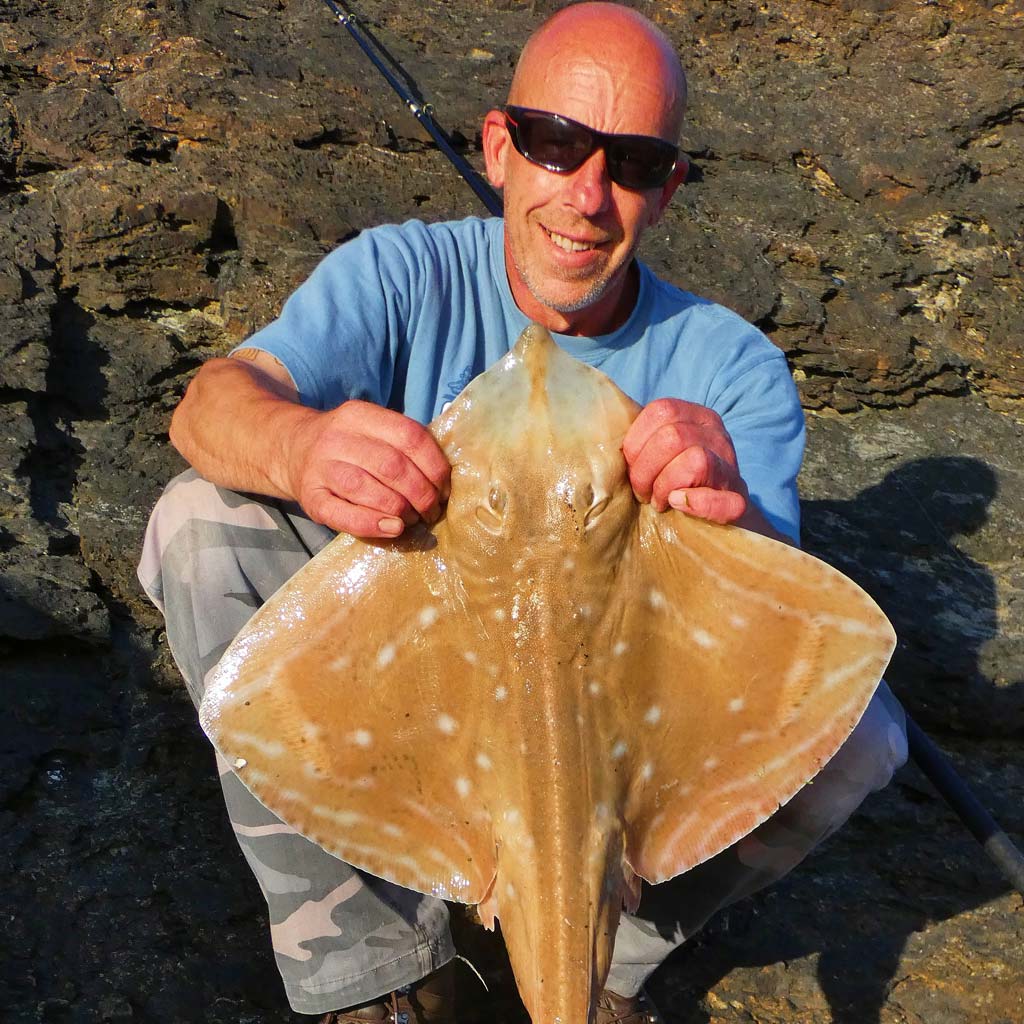 Mark hauled away from high up above me and the combined beams of our headlamps scoured the water in anticipation. The fish was staying deep and the leader knot was still below the surface even as it came close in. Mark applied more pressure and through the depths I caught a glimpse of a white belly before seeing the shape of a good-sized ray spiral gracefully to the surface. I carefully drew the beaten fish towards me and reached down to secure Mark’s prize – a female small eye that had a purse emerging from her vent. I shouted up to Mark to bring the scales and the camera and we took care of the weighing and pictures down by the water, aiming to get the fish released as quickly as possible. She went 10lbs exactly, the biggest small eye I’d witnessed from this stretch of the coast in six years and a fantastic reward for Mark’s tactical move.

After congratulating Mark, we all went back to the rods – myself quickly landing another hound in the same sort of class as the first and then Mark catching a slightly smaller one. By this point, it was getting late and we’d pushed our session time as far as we could. Reluctantly, we packed up knowing full well that there were still more fish out there for the taking.

Trudging back up the gorse-covered cliffside, we were all on a bit of a high – elated to have had such an enjoyable session at a place none of us had fished for some time. Like many others, I’d found 2018 to be the hardest year for Cornish shore fishing that I’d yet experienced and the north coast to be affected worst of all. I’d begun to fear that this was it, that the sudden nosedive in the fishing was just how it was going to be from now on. This session had gone some way to putting those fears to rest and reassuring all three of us that our beloved home range was not done yet. 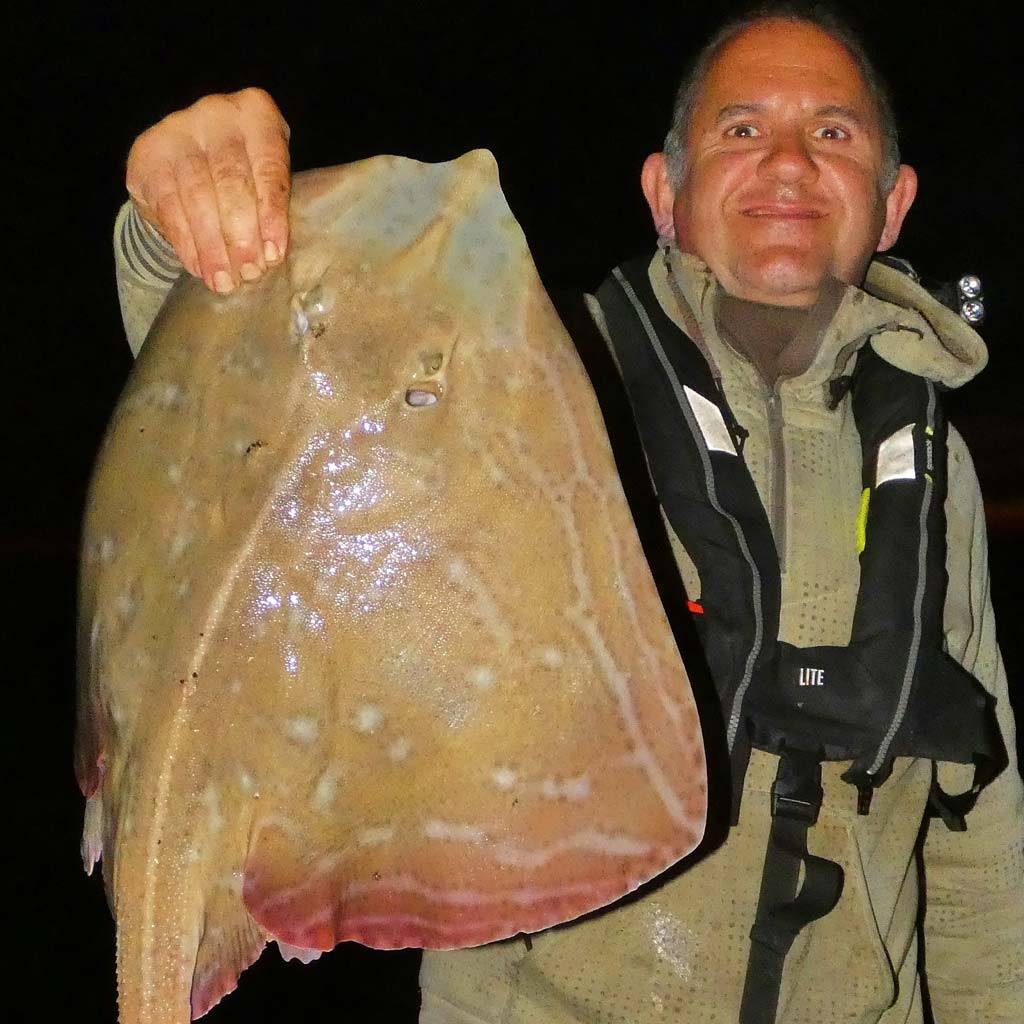 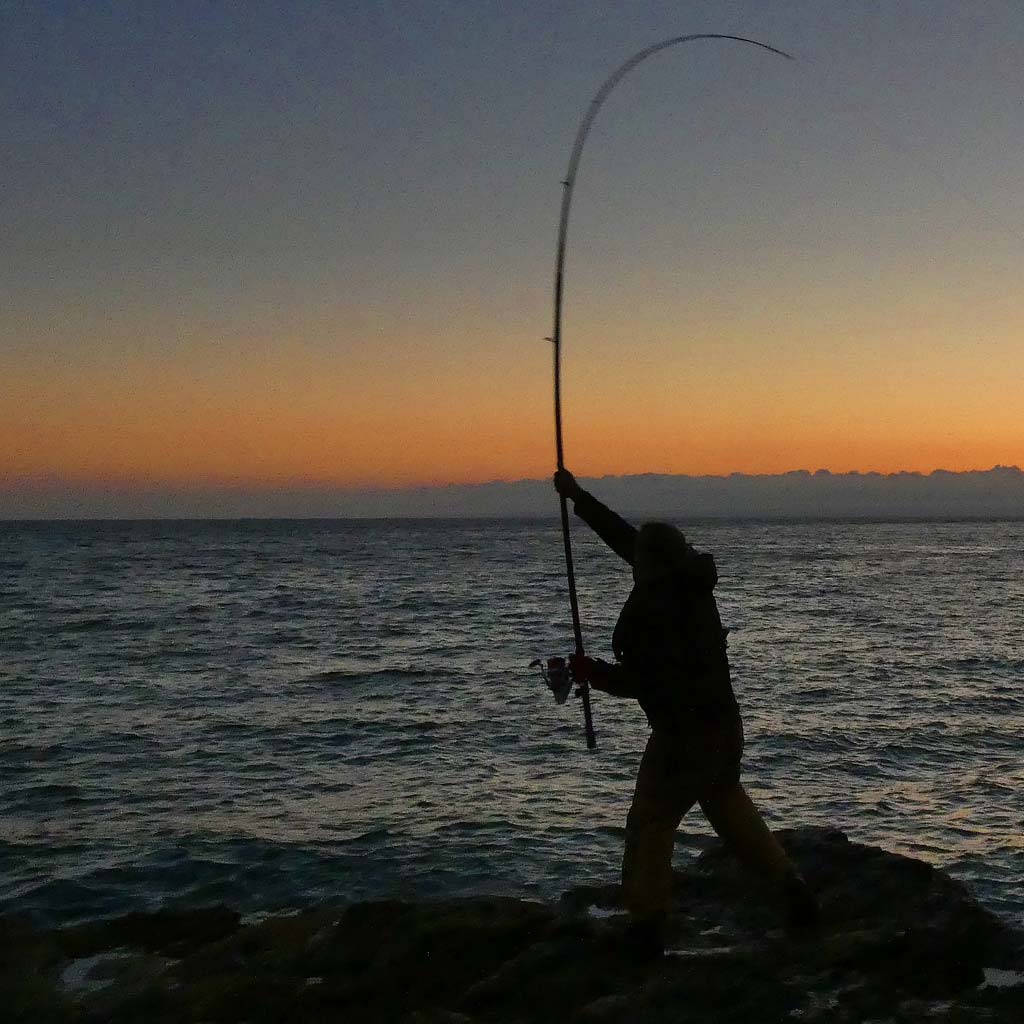 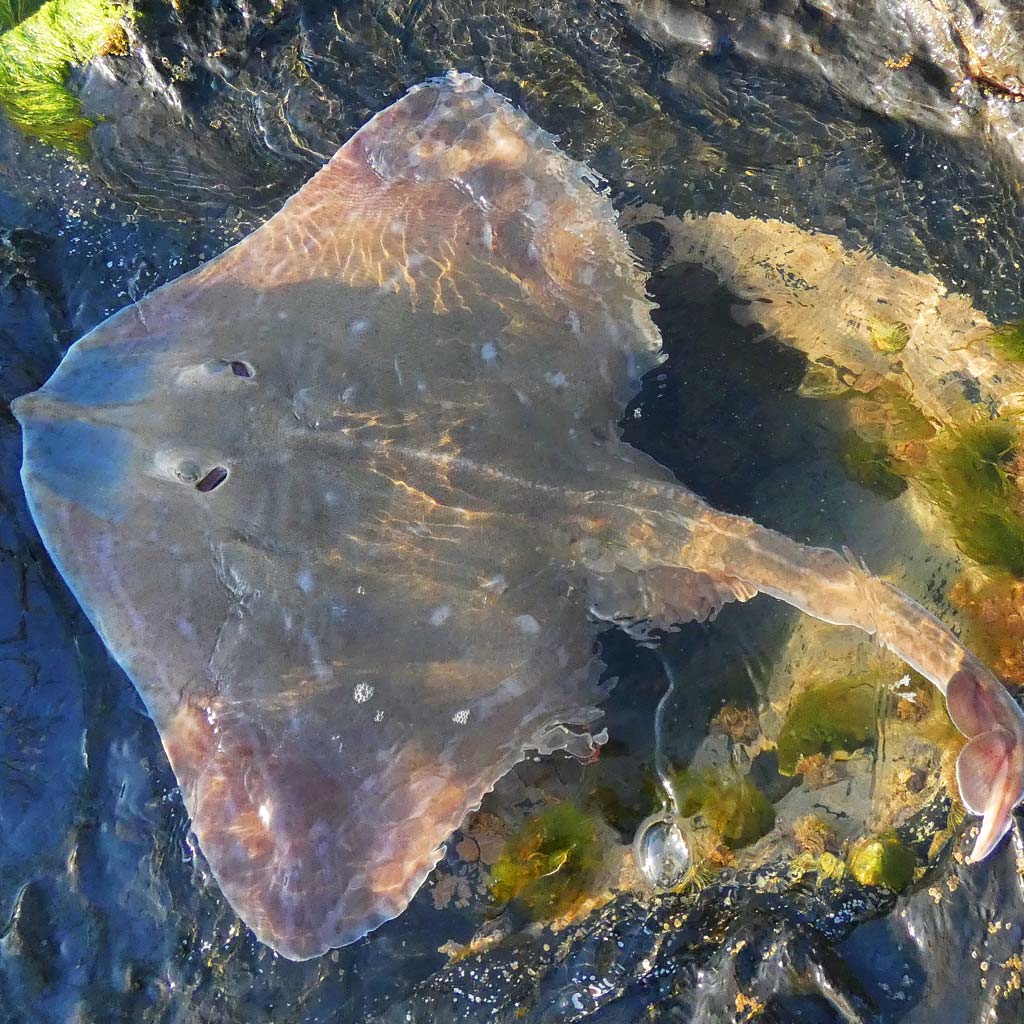 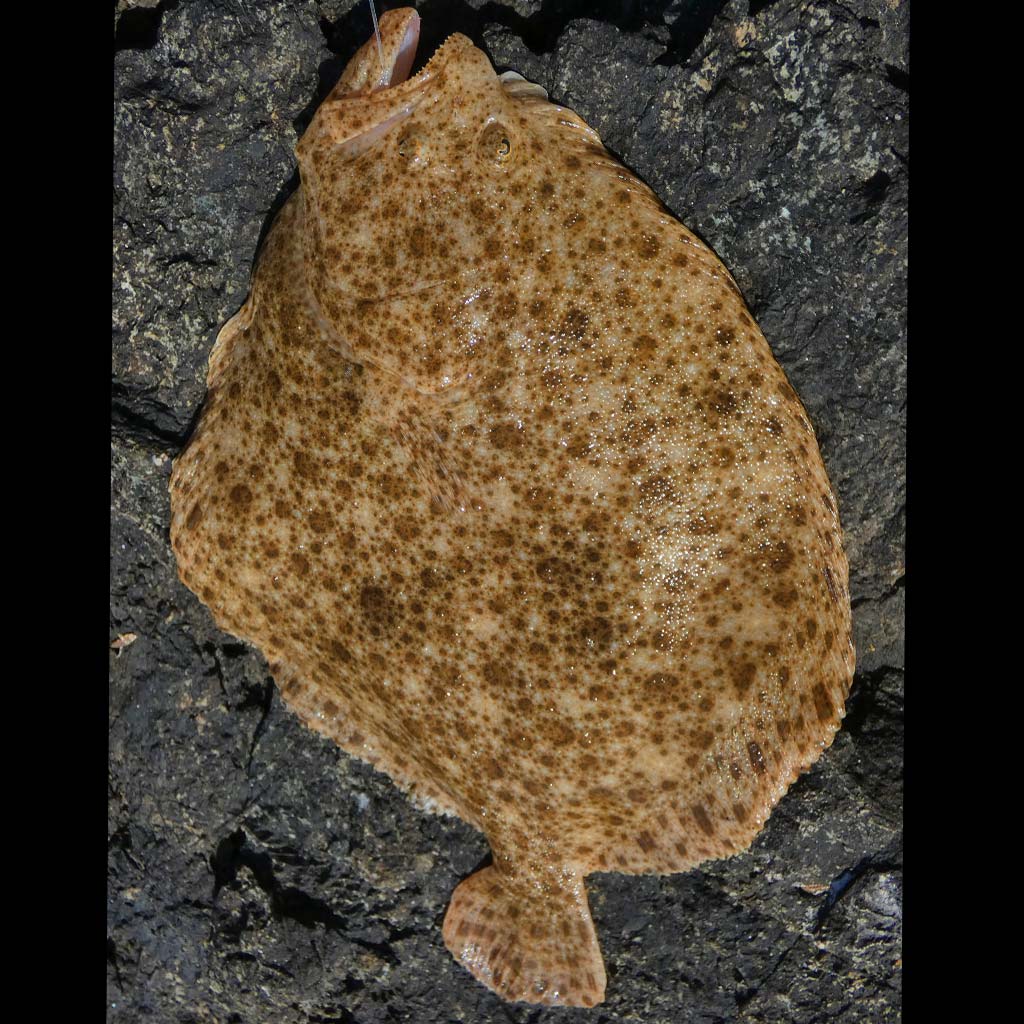 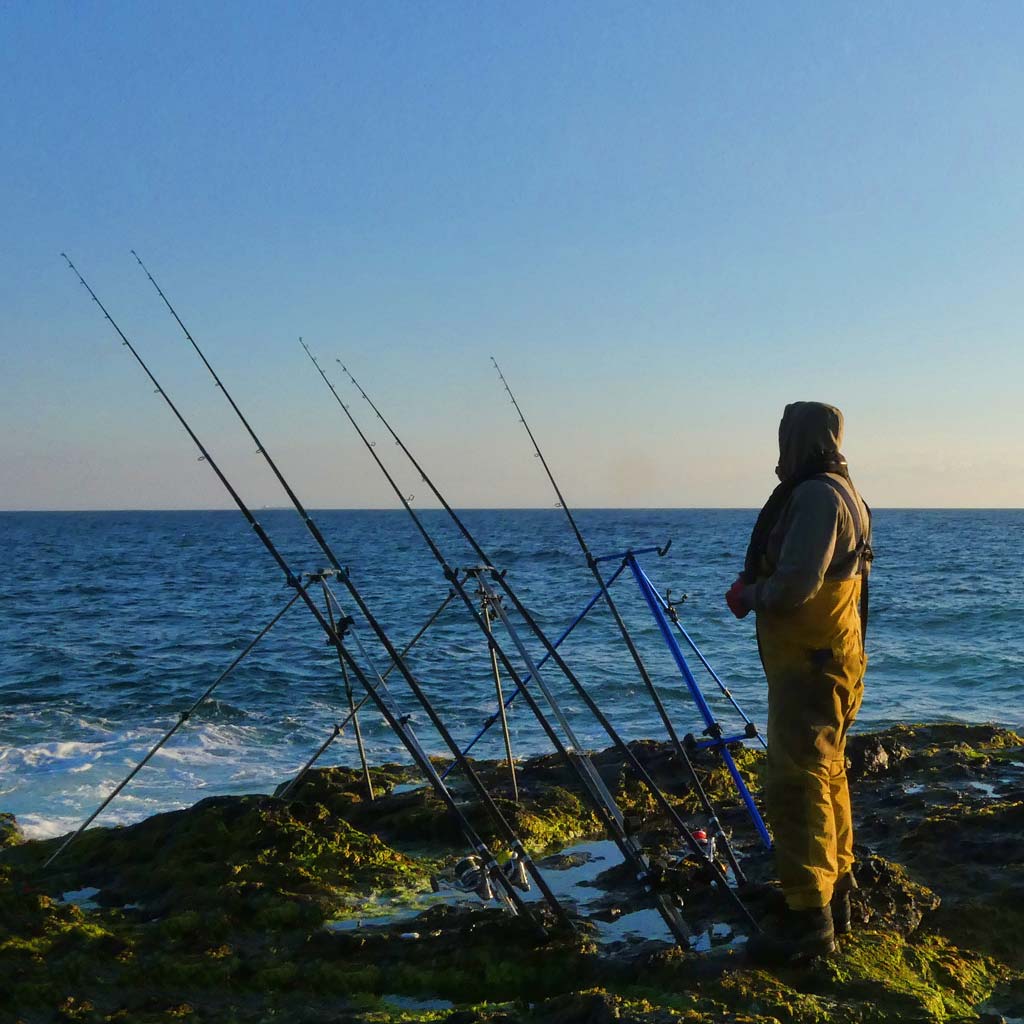