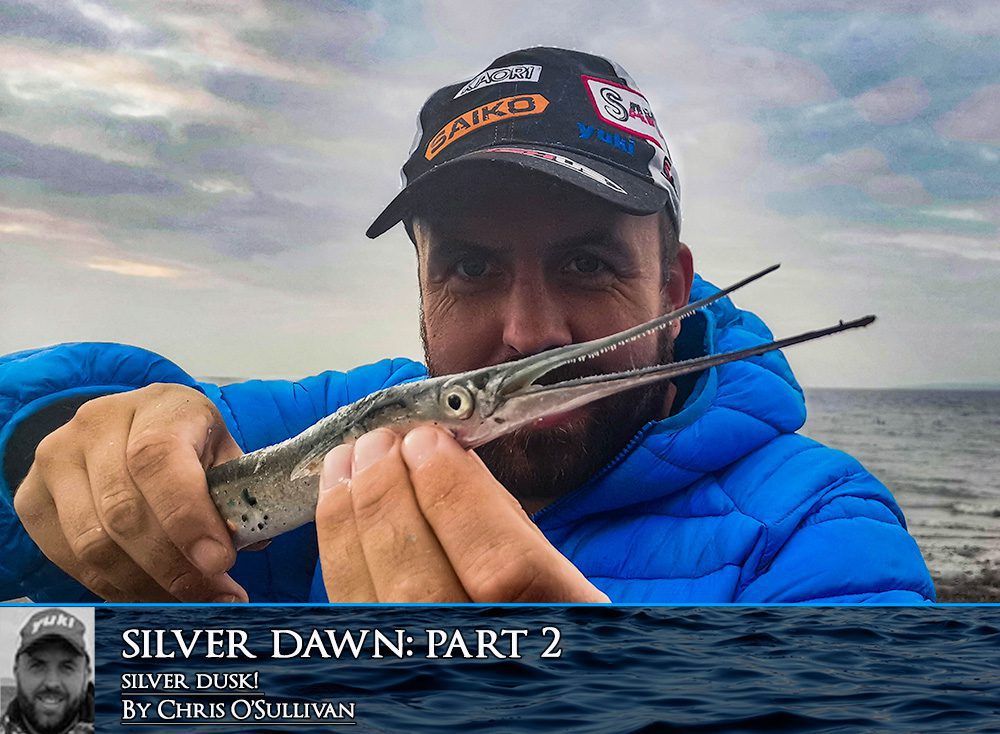 When life gives you lemons you make lemonade and when your work shifts get switched around to coincide with the ideal tides then you have to improvise. The plan of action following on from the incredible result of last months dawn fishing expedition was to return and this time to target the Garfish that I had seen active during the Mullet session. Unfortunately, the best laid plans don’t always come to fruition so the plan had to change.

I like to fish a rising tide for the Gars so the best option was to fish the beach approaching dusk in order to avoid the summer crowds getting in the last of the holiday weather. Garfish are a tough character to spot but they are creatures of habit and if you find them in one area you will almost certainly find them there again the following summer. Likewise if you can track down any old reports of them in your area they are a great lead as to where to find the Gars again.

Tralee bay is a great are to target them along with Barrow Harbour and while a specimen length Garfish is a colossal 90cm the average size for these stream lined acrobats is around 60cm. There are many ways to target them from the spinning gear and German sprats to simple float tactics and my personal favourite is the popped up flapper rig. Without giving the game away I like a 3m trace with 3 x 1m snoods with 15mm pop ups from either Yuki, Sunset or Akami being my preference. Colour of pop ups now comes down to a serious science.

On the continent where the use of pop ups and these light rigs far outdate the UK and Ireland they are the experts. The basic guide I was told at the Yuki masters was white for bright sun, red for overcast days and yellow going into the evening. Now how accurate that is I can’t say but I know that white is by far my favourite. It certainly gives you a lot to think about at the very least and lots of options.

On the day conditions were ideal the bay was calm with a gentle westerly breeze rippling the surface. I always fancy my chances when I see the water like this as I figure the gars have a bit of cover and can feed hard if they wish. With the 4×4 I was able to drive along the beach and pick a likely looking spot. I chose where the sand gave way to a small reef to cast to. My thinking being that the gars could hunt over the reef and onto the sand. Using small mackerel strips I baited my size 8s and cast my long trace. This takes a bit of practice but the ‘off the ground’ works best for these long rigs. For ease of use I had gone for a 2 hook popped up flapper 7ft long and 2 x 3ft snoods.

I had the rod on the sand spike and was preparing my second rig when the rod tip lunged over. Naturally I was over to the rod in a shot but nothing developed. Turns out my line had been clipped by a flock of small black birds that were patrolling the shallows. I changed up the baits and was surprised to see the bottom one was in a poor state. Had something taken a shot? I recast just shy of the reef and placing the rod back high in the stand. As the lead hit the water there was an eruption of silver. I had spooked a couple of Garfish straight out of the water. Confidence was now extremely high and within a few minutes there was a pluck on the tip of the Kenta followed immediately buy a violent take.

The rod high in the sand spike exaggerates bites but it doesn’t half get the heart racing. I gave it a minute in the hopes of attracting a second fish then slowly lifted into the fish. A strike here would either snap the snood or pull the hook so I was happy to have weight on still as I began the retrieve. The fish surfaced early and I was able to spot the tell-tale swirl of the Gar snaking through the water followed closely by a second Garfish.

With them both safely beached I was back in the water super fast. I was thrilled to get the double shot, Garfish are an excellent bait for rays and as tipping baits so I had decided to keep some for the winter matches hence the small hooks. No sooner had I them unhooked and the rod was going again. For some unknown reason I picked up the rod and struck in, pulling the hook straight out of the fish. A total rush of blood. Next cast the really positive bite returned but with a bit more calm I lifted in and landed my third of the evening. Next cast a Mackerel took a fancy to my bait and gave a good account of itself before spitting the hook at the edge of the water. I managed three more casts before it got too dark which resulted in two more Garfish landed.

In all with my rescheduled trip I ended up with Five Gars and a dropped Mackerel. Not bad for a two hour session. If you wish to fish for gars but not keep them I recommend using a long shank fine wire hook and crushing the barbs to assist in unhooking. Use a wet cloth and handle the fish as little as possible to avoid their little green scales being taken off and return them to the water as quickly as possible.

From Fenit right around to Killshannig Garfish can be successfully targeted on the sunny days that usually are more suited to sun bathing. Best bait is belly strips of Mackerel but small sandeel will also do well. In order to get your bait to float make sure to use good quality fluorocarbon. Personally I like it up to around 8lb and not any heavier. Good luck targeting these fast moving summer visitors.