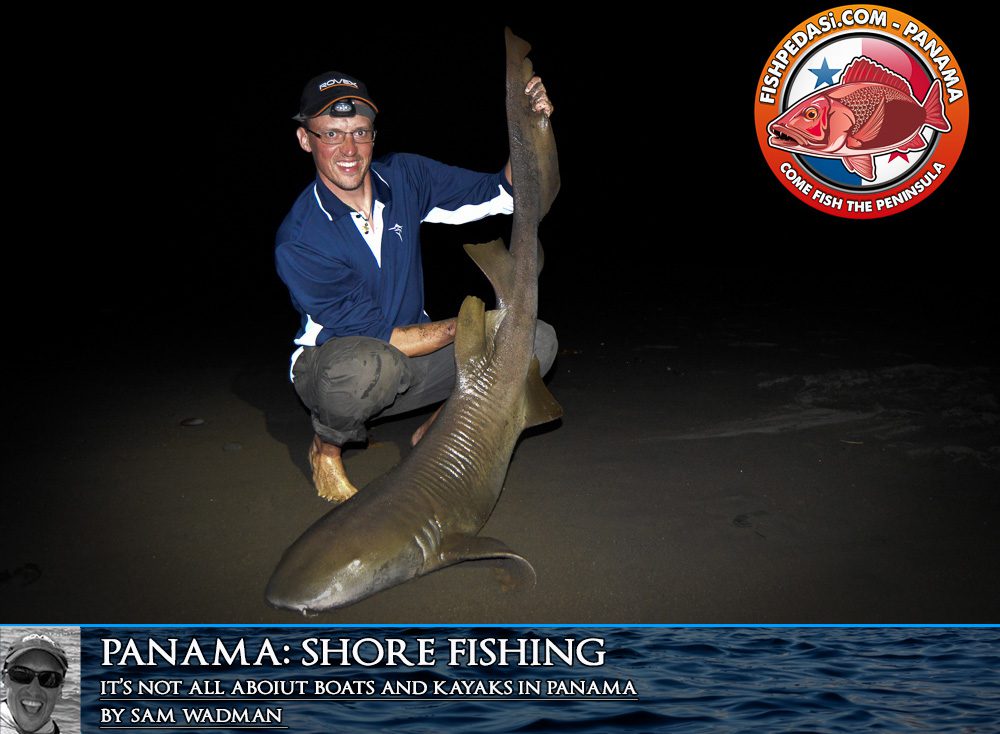 When it comes to fishing the oceans of the world, there’s nothing quite like being attached to a big fish with your feet planted firmly on terra firma! It’s the ultimate challenge. I’ve talked in recent articles all about the amazing fishing we have here in Panama that is available to boat and kayak anglers. It’s long overdue that I covered the sport that can be found from the shore too.

Sure enough, anyone can get a rod and access the shoreline for fishing so in that respect its open to everyone, but that doesn’t mean that its easy. Far from it. This a discipline that requires a lot of patience, time and determination. There are many factors to take into consideration and success is never a given. You really have to work hard at it and most importantly you need the right conditions to bring the fish within your reach from the shore.

People think that because it’s Panama and we have plenty of fish that they’ll be crawling up your line, but that’s not the case. Every fish you catch from the shore here is hard earned.

The best time of year for shore fishing on the Azuero Peninsula of Panama where we are based in Pedasi is between late January and May. This is our dry season that the locals affectionately call summer even though it is actually our winter, we are north of the equator after all. The weather is typically full power sunshine and stiff winds from the north that push 30 to 40 Km/h. This stiff wind is the reason behind why the shore fishing picks up at this time of year.

Being on a Peninsula with an east, west and south facing coastline, we are able to get in the lee of the wind when it’s coming from the north. At this time of year along the south coast, we typically find nice flat, clean water and have a brisk wind over our shoulder which helps with casting distance immensely. The swells are much smaller at this time of year too.

As the wind grows ever stronger from the north it pushes all the warm surface water out to sea creating a current and in doing so drives an upwelling of cold, nutrient rich water from the deep. This has the effect of bringing lots of bait, jellyfish and microorganisms with it. As we move into March and April especially, we find large schools of sardines and anchovies present along our coastline which in turn draws the predators in.

Typically, the most common predators that seem to be attracted by these large bait schools along the coast are jack crevalles, black skipjacks, blue runners, roosterfish, sierra mackerel, ladyfish and sometimes small snappers. There are times when we also find pacific tarpon and snook getting involved in the action too, but this is an exception.

By far the most exciting way to fish is with lures. Its active style and the minimal amount of gear required keeps you mobile which is important. The shoals of bait can pop up anywhere and it pays to get on them quickly as once the predators start hitting them and a ‘bust-up’ is under way you need to be in the zone.  They don’t often last long or can move out of casting range so you need to maximise your chances by covering the area as much as you can, while you can.

The birds are our friends in this situation. With their ‘eyes in the skies’ they are always going to be the first on the scene when bait starts popping or is being herded up by the predators. As such, they are a great indicator of where we should best focus our fishing efforts. Even if they are just casually sitting on the water, its usually because they have been feeding or are waiting for the shoals to pop up again. Birds like this are often marking bait. Find the birds then quite often you find the fish.

The lures we are typically using for this kind of fishing tend to be small metal casting jigs up to around an ounce in weight, small minnow style plugs, bucktail jigs and the like.

Basically, something that matches the size of the bait and enables you to cast a good distance and cover plenty of water. Fishing with these smaller lures and a ‘match the hatch’ kind of approach is a good all-round technique for catching a variety of species in a mix of sizes.

It’s also possible to focus on bigger specimens of jack crevalle and roosterfish by using bigger lures on heavier tackle. It’s tough to beat catching these aggressive predators off the top which is a fantastic visual experience. As such, poppers and skip baits are the order of the day, these seem to be much more appealing to the bigger fish. Sure, you’re going to catch less concentrating on this style of fishing but when you do it’s more likely to be a much better specimen.

Typically, dawn and dusk are the peak times to concentrate your efforts from the shore here. Not only is it the most wonderful time of day to be on the water, it also avoids the worst of the heat which can be really full on in the peak dry season months. The sun is brutal here, being so close to the equator. The soft light at either end of the day is much more likely to see quality fish move into the shallows and therefore casting range.

Bait fishing is also worth a try if that kind of thing is your passion. This opens up possibilities of finding other species, especially if tried after dark. Once the sun sets then a whole world of different species come out to play and there are opportunities to target stingrays, eagle rays, some big saltwater catfish, shark species and some of the snapper species we have here. These snappers like to move into shallow water after dark to hunt and are susceptible to a well-presented bait or lure in this situation.

There’s no need to complicate things tackle wise for bait fishing with a well-constructed pulley rig consisting of quality components, hooks and maybe a wire trace if after sharks.  For bait, then it’s tough to beat a fresh black skipjack. These are very smelly and full of blood which draws fish in from great distance after dark especially. Alternatively, we can purchase sardines and squid locally which are also effective at pulling in the fish.

Another area I have been experimenting in is fly-fishing. I truly love to cast a fly and really miss this style of fishing as it’s rare that we get perfect conditions for it from the shore here. It’s a tough gig. That said, there have been moments where everything has fallen in to place and I’ve rushed to put the fly rod together with some success.

The most memorable capture was a large black skipjack tuna from the beach in skinny, knee deep water. I had noted many small anchovies in the shallows close to a river mouth one afternoon and cursed myself for not having the fly rod as there were large numbers of skipjacks hunting in close. This in itself is a rare occurrence as they are normally found much further out.

Anyhow, the next morning I went back at first light with the fly rod just in case they were still there. To my surprise, I was greeted with the sight of many of them present and still hitting fry in the edge. It was quite a show they were putting on. It took just 2 casts to get tight on one and then all hell broke loose!

After the initial explosion of water as the fish hit the fly in a foot of water, it headed for Ecuador at about 70 mph taking me around 120 yards into the backing in the process, the reel was singing and spinning at knuckle shredding velocity. There was little I could do other than hold on! It was a wonderful fight on my 9wt fly gear and after much toing and froing it finally slid up the beach. A very memorable capture indeed.

Although the ‘summer’ is windy as hell here it’s a great time to come and fish from the shore and there are still chances to take the boat out or run down the coast and fish the sheltered waters fronting the Cerro Hoya National Park. If you fancy an adventure fishing down here in Panama with me at this time of year then get in touch for bookings. We are very competitively priced and can offer a varied program. Check us out!