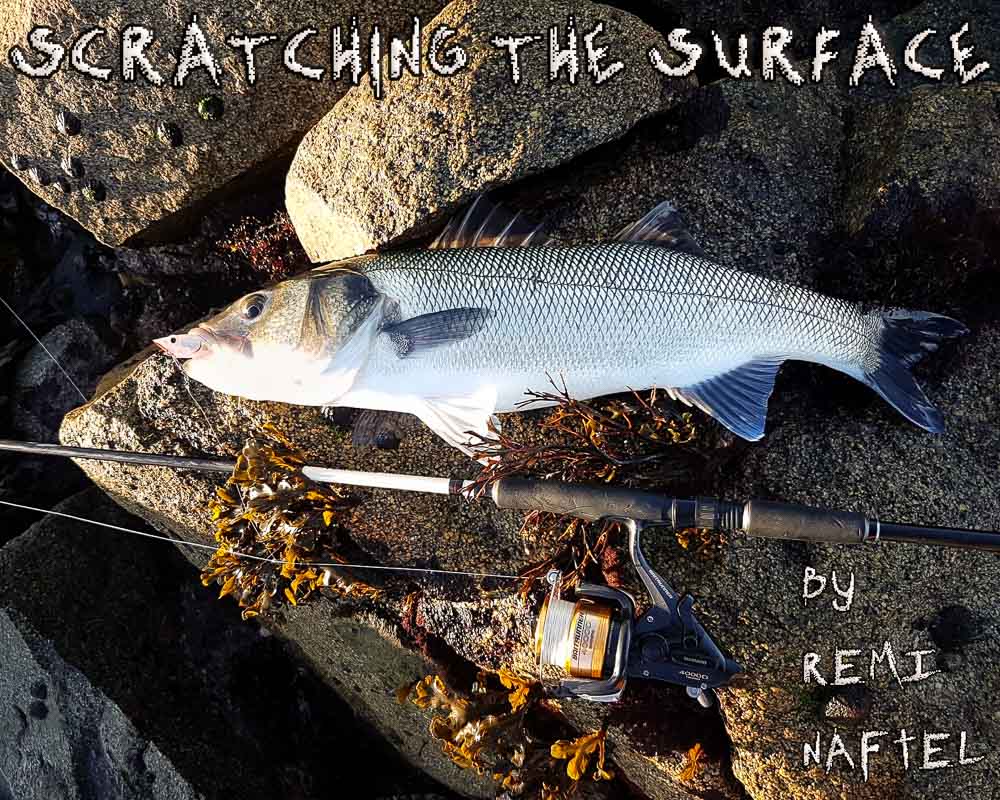 Surface lure fishing for bass can be a very up and down experience, something that I’m sure many of you can relate to. On the upside, nothing beats the excitement you feel when you’re working a lure and you see a swirl behind it – there’s a sudden rush of adrenaline, then your brain kicks in and presents you with a choice: do you keep retrieving or stop? Nine times out of ten, stopping the lure results in a hook up. If not, retrieve a little more and stop once again. When that fish takes the lure it’s the most amazing sight, normally a big splash followed by that ‘thump thump’ as the fish realises its hooked and tries to flee.

Many times, I’ve not been concentrating and it’s only when I’ve heard the splash that I’ve realised a fish was chasing. I remember the very first time I tried surface lures, fishing a shallow mark with bootlace weed on the bottom. I fished for around two hours not really knowing whether I was working the lure properly or not. Time passed and I’d not had a sniff from a bass, garfish or even a stray piece of weed and boredom and disappointment started settling in. Halfway through a retrieve, I’d had enough so I stopped reeling to take a break and put the rod down.

I took my phone out of my pocket and was just about to check some messages when I heard an almighty splash and saw the rod being dragged across the rocks. When I finally managed to grab the rod and bring the fish in it was a bass weighing exactly 5lbs. Unfortunately, it had swallowed the lure deep down and I could just about see the head poking out from its throat. If I had been paying attention and was actually fishing at the time, I’m sure the fish wouldn’t have been able to swallow the lure so easily.

But what about the downside of fishing surface lures? Imagine the same scenario as before, you’re retrieving your lure when you see the telltale swirl as a fish begins to home in and you brace yourself for a take… that never comes. You stop and start again – still no hook up. Knowing that you could have caught a fish, especially as you’ve clearly seen its obvious interest, is very disheartening. The only real positive to take from this is that at least you know the fish are there. Sometimes if I’m trying a new mark in daylight or if I’m not sure whether the fish are there, I put on a surface lure just to see if there is any life about on or near the surface. It’s easier seeing if fish are around in this way than prospecting using a subsurface lure. 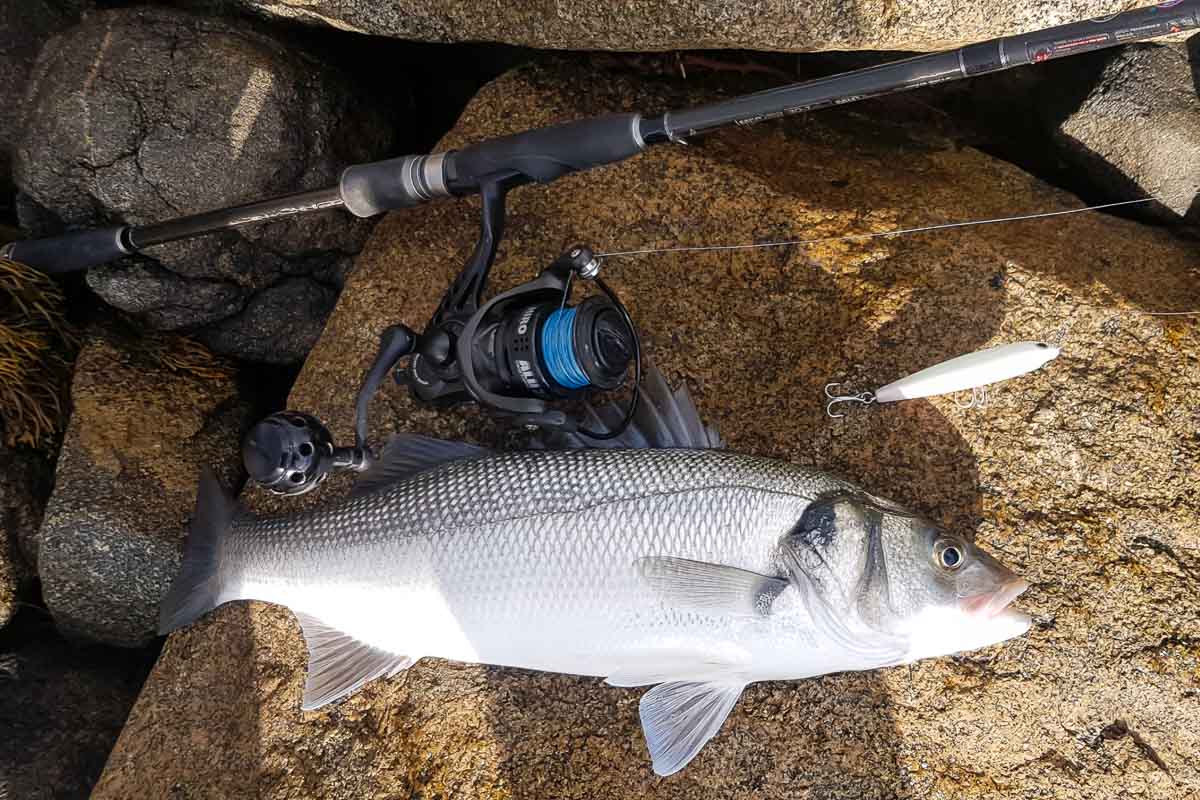 When it comes to the actual lures themselves, I’m not going to go on about lures that everyone seems to favour like patchinkos etc. I always like to use something different and cost-effective; personally, spending £20 on a single lure is not really my thing. The two lures I use most often and have had great success with are the Noeby NBL9110 and the HTO Axia Glide. The Chinese-made Noeby NBL9110 is 11.5cm long and 25.5g in weight. It comes with strong, high-quality saltwater treble hooks (normally the first thing people change on their lures) and a nice set of ball bearings which aid casting and sound attraction.

One issue that I have with hard lures, whether they be surface lures, sub surface or any other type is hook rash – that awful half moon scratch mark left by the hooks after use. This is one of the reasons I won’t spend upwards of £20 on the more expensive lures.

The Noeby doesn’t have a vulnerable paint finish on the surface of the lure, it’s made up of a clear see-through plastic with a holographic inside so you never have to worry about that nasty hook rash. Being a Chinese lure, they are almost frowned upon, especially since you can get them very cheap from AliExpress for around £6 each (including delivery). For me, however, they are definitely a diamond in the rough. Another thing to point out is the Noeby’s casting ability (often a weakness of cheaper lures) – they cast some serious distance as long as they aren’t swaying about before you launch them.

As with many surface lures, you can use the ‘walk the dog’ technique with the Noeby, adding subtle twitches with the rod tip while retrieving to give the lure a zigzag motion. I’ve used these in a range of conditions from seas as flat as glass to rough, frothy water and the lure works well in both scenarios and catches fish. The NBL9110 comes in various colours but my favourite has to be the light blue with black dots and brown head. 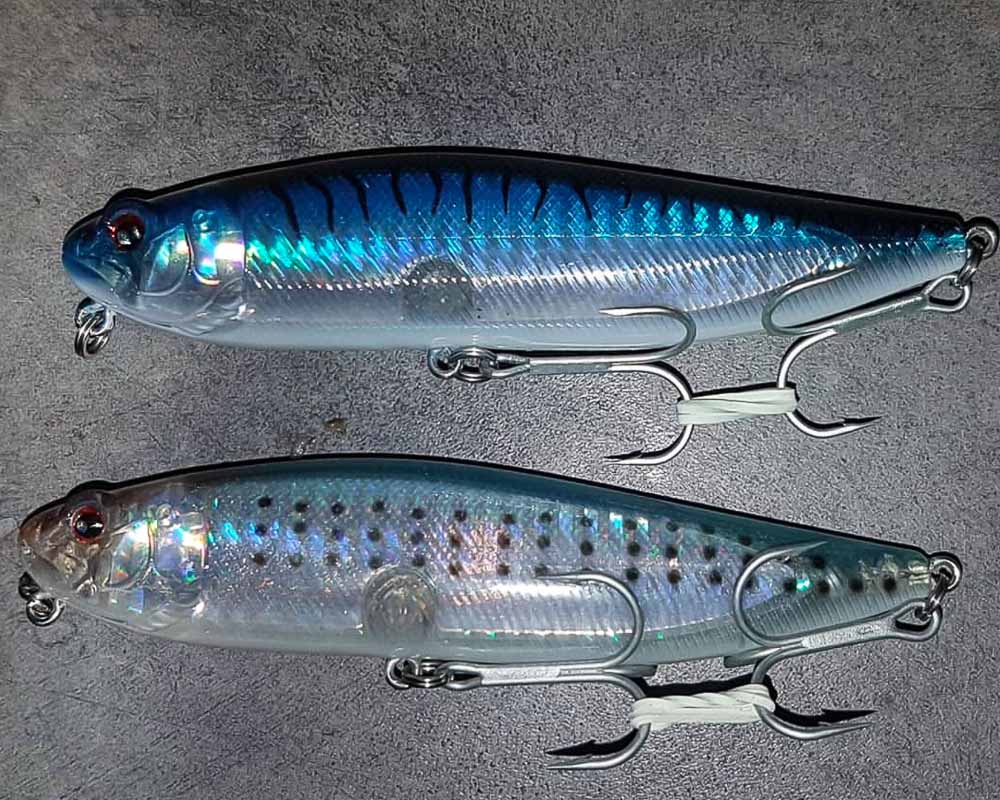 The second lure I’d like to talk about is the HTO Axia Glide. It comes in various sizes and weights from 2g 50mm – 12.3g 90mm but I’ve not used the lighter models so cannot comment on what they are like. I’ll definitely be trying them on my LRF outfit soon though. The model I use is the 12.3g 90mm in the pearl colour, which I first saw when Grant Jones and myself attended the Pembrokeshire Bass Lure Tournament last year and visited Anglers Corner in Milford Haven. My eye was immediately drawn to this little lure and I liked the look of it for estuary fishing. I’ve always favoured pearl coloured lures. When I was a kid I used to troll Redgills behind my little boat and the 75mm in pearl used to outfish any other size and colour combination.

My first outing with the Axia Gilde proved to be a success, even though I landed no bass bigger than 3lbs. Grant and I were fishing an estuary channel, the tide was flooding and distance wasn’t needed so I opted to try out my new lightweight surface lure. Casting out, I was shocked how far the 12.3g lure actually went – much further than I expected, even into a head wind. On almost every cast, it got nailed by a bass as it slowly walked along the surface and I stopped counting after reaching double figures.

Back home in Guernsey, I couldn’t wait to try this new lure and, once again, it didn’t disappoint and has caught me many fish up to 6.8lbs. If there was one thing I could say that I don’t like about the lure, it’s that, over time, the hooks do bend. This is to be expected with a lure this size, however, as it’s not going to work the same with heavy gauge hooks on it. In fairness, it does seem to be more the smaller, more lively fish which twist and bend them slightly – the hooks appear to fare much better in the fight with a bigger fish.

This is also a walk the dog style lure where you need to twitch the rod tip to impart the action, but the Glide needs slightly less erratic rod movements than the Noeby to achieve the correct motion. I’ve tried this in the same variety of conditions as the Noeby but it doesn’t work half as well in bigger seas as it gets thrown around too much.

In conclusion, just like with all kinds of lures, I like to think outside the box with surface lures and try models which would pass under most people’s radar. When it comes to something like the £6 Noeby, you have very little to lose and potentially a lot to gain. 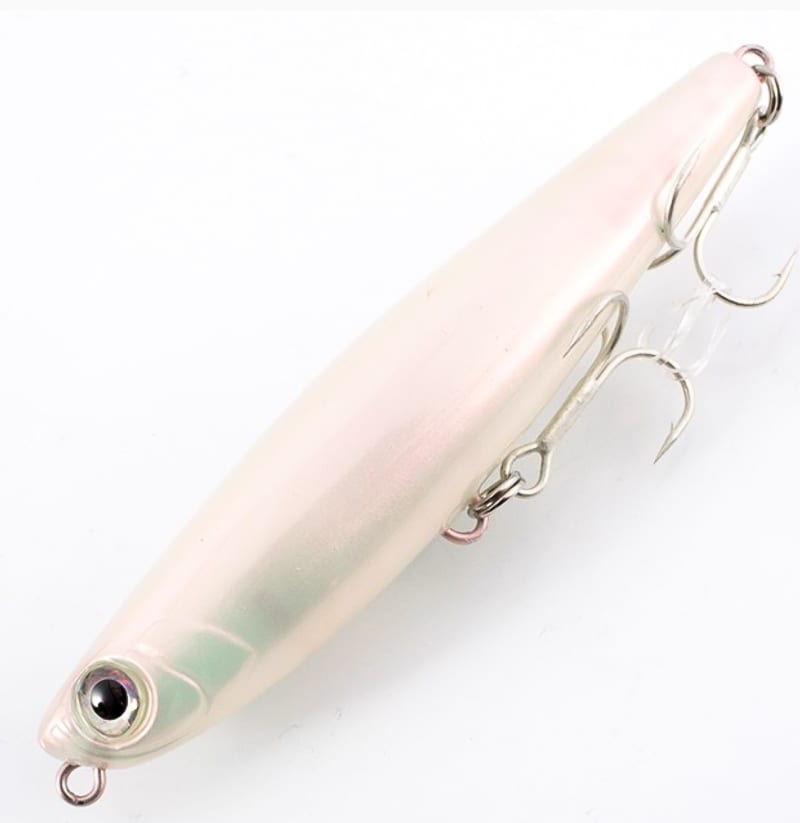