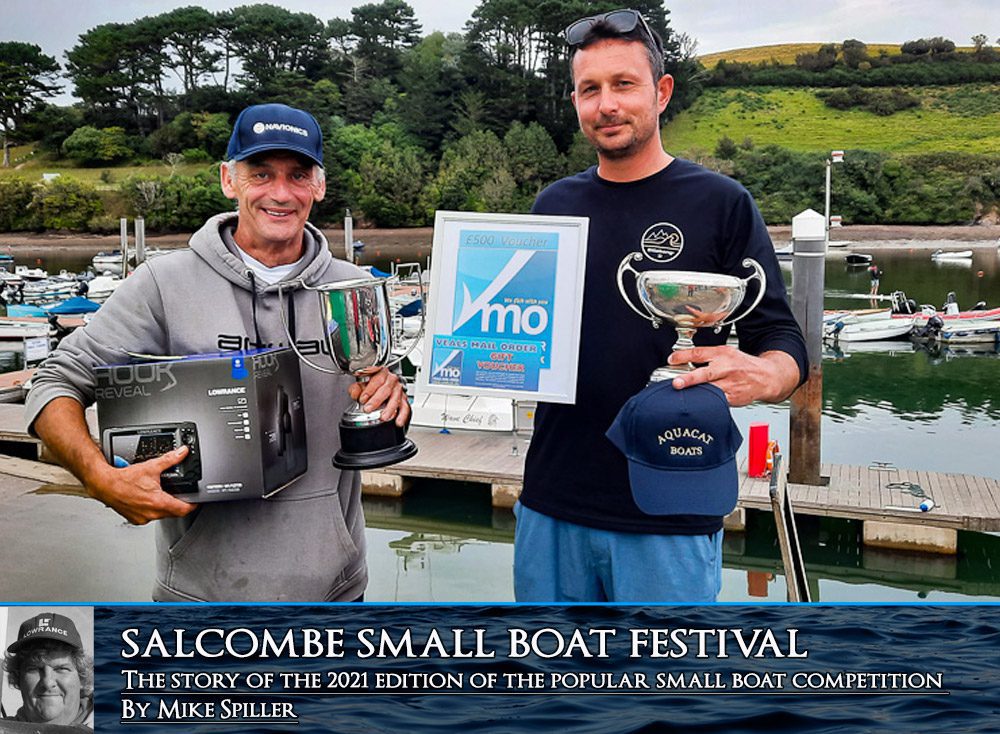 For well over forty years now the Wyvern Region of the Angling Trust have been holding their popular open small boat festival at Salcombe in South Devon.

If fact this year was the 42nd year for the event. For many of the early years the competition had been sponsored heavily by Bonwitco boats at Kingsbridge. The owner Francis Wills used to supply a superb hull as first prize. Francis himself always looked forward to this event, at times he would showcase any new design Bonwitco boats that were nearly ready to be seen by the public for the first time.  Both David Rowe and Francis used to enjoy their days out at sea at Salcombe during the festival. They used to visit every participating boat over the weekend talking about the ‘one that got away’!

The format for this enjoyable weekend away has changed little in all the years that it has been running which just goes to show that if the anglers keep coming we must be doing something right! The presentation of awards for many years were made at the little youth hall on the road down to Batson Creek.  Many differing and interesting venues have been used as the headquarters over the years for this very friendly event that everyone looks forward to and is a main stay in many small boat anglers diary.

Unfortunately last year’s event fell foul like most things to the Covid restrictions.  This year’s event at times looked very doubtful with lots of restrictions still simmering on.  During a Wyvern Teams meeting in mid to late July it was decided to go for it and the panic to get it all done in time for the September deadline was on!  It was a big task but it would force us to tidy up our organisation of the two day event and make it happen somehow. It would need to run smoothly as everything this year was being run from an outside venue. What we couldn’t afford to happen was to force people to wait for the results for too long… especially after a couple of long, hard day’s specimen hunting.

We decided to aim for the results to be out within one hour of the scales closing. This had never been achieved before by a long chalk but by hook or by crook it had to be done!

The small organising committee have been lucky over the years with some great sponsorship for many of the main prizes. This year’s prizes came flooding in once again from Aquacat, Veals Mail Order, J G Technologies, Navionics, Saltwater Boat Angling,  AFAW,  S W Sea baits and Seaton Angling Centre to name just a few of the major ones.

The competition is open to a range of boat sizes and also powered and non powered craft. Minimum boat size is ten feet with the maximum being set at twenty eight feet. Non powered craft and anything less than thirteen feet would not be allowed to cross the Bar.   Safety is paramount during the event and it is the coxswain of the local RNLI boat who makes the decision on both days for the permitted areas the boats can fish in. If the weather is good and settled the full Zone Three is given. This covers the area up to one mile off both Prawle Point and Bolt Tail which encompasses a good deal of ground with a lot of scope for varied fishing. If stronger winds are forecast then the area would be reduced back to a line drawn between both major points of Prawle and Bolt.  If the weather throws everything at us we can fish in Zone One which is inside the famous Salcombe Bar.

The limits set for this year’s event would be Zone Two on Saturday with the forecast being 10/15 mph from the west and the full Zone Three for Sunday with only very light winds predicted.  At the ‘sign on’ at Batson Creek slipway on Saturday morning there was a good queue forming of eager participants ready and excited for what lay ahead over the next two days. The weather gods smiled on us and we were up and running for the Salcombe Small Boat Festival 2021. By the Sunday we had eighty three anglers signed on and they would be fishing from thirty one small boats.

The Salcombe Estuary is big and its creeks run off in all directions like the four points of a compass.  Launching is easy for the visiting vessels, in fact three boats at a time can easily fit down the ramp at pretty much any state of the tide. Trailers and cars can be parked nearby which is also incredibly handy.  Fishing is generally good at this time of year and species of fish that the anglers are likely to come across are mackerel, garfish, scad, grey mullet, trigger fish, gurnards, conger, cuckoo wrasse, ballan wrasse, bull huss, lsd, pollack, plaice, spotted ray, small eyed ray and blonde ray. A few species we decided to remove from our fish competition list were tope, spurdog and bass. This was advised by the local office of the Devon and Severn IFCAS after we consulted them on the matter.

Strict size limits were in place with a good number of the species mentioned even having a high weight minimum size. This would reduce the amount of fish being brought in for recording.  The winner of the event would be the person who records the best two fish of different species over the two days.  This competition has grown in popularity over the years with residents of Salcombe always coming down for any spare fresh fish going free!

Many of the travelling boats chose to stay once again back at the village of Malborough. Many years of this event being held here has seen a relationship grow with Alston Farm campsite. It’s clean and welcoming and has toilets and hot showers available. What more could you want after a couple of days of launching and fishing?

Many thanks must also go to the Salcombe Harbour Authority and Pete who took charge of proceedings at the Batson creek slipway ensuring everything ran smooth and most importantly safe! A big thank you is also due to Chris at the Salcombe RNLI as the event would never get off the ground without these brave guys.

A donation of £100 has been sent to them for the help and advice given each morning of the event and I am sure you will all agree that it is very reassuring knowing that they are there if ever we need them whilst out at sea.

Any profits made during this festival will support future, similar events and Wyvern activities plus the Open Shore competition at Slapton Sands and the junior open competition at Mountbatten Breakwater in Plymouth.

First place- Winning the £500 VMO voucher plus the British Shoe Corporation cup was James Trevett of Honiton SAC.  He had a blonde ray 20.45lbs and a small eyed ray of 11.75lbs making 209.0%

Second place – Winning a pick from the prize table plus the Ludbrook Cup was Leonard Crossman. He had a blonde ray of 20.75lbs and a small eyed ray of 11.50lb making 208.3%.

Third place- Winning a pick from the prize table and the Torbay ASA Tray was Steve Blackmore. Steve recoded a blonde ray of 24.20lbs and a ballan wrasse of 4.22lbs making 197.7%.

Fifth place went to Plymouth angler Martin Vanstone who recorded a small eyed ray of 10.34lbs and also a blonde ray of 19.55lbs. This gave Martin a total percentage of 191.75%.

Eighth place was filled by Antony Keith with a blonde ray of 22.60lbs and a lesser spotted dogfish of 2.265lbs making his total 177.7%.

The best percentage fish caught on Saturday went to Dean White with a blonde ray of 23.40lbs 117.0%. This won Dean the engraved glass tankard. The best fish on the Sunday went to Steve Blackmore with his already mentioned blonde ray of 24.20lbs which worked out at 121.0%. Again this won a fine glass tankard suitably engraved for the occasion.

The best Specimen by a lady was won by local angler Claire Lowry, who took home some nice cut glass wear along with a year’s subscription to a monthly boat fishing magazine. Her catch was a blonde ray of 18.50lb for 92.50%.

A superb prize of the £250 VMO voucher for the best junior was won by Finley Wright from Plymouth.  Finley recorded a blonde ray of 16.30lb which worked out to be 81.50%. We are all sure he will find something good to buy with that nice tackle voucher.

The award for the best flatfish was presented for a nice plaice of 2.56lbs for Mark Wright. This worked out at 64.0%.

The best Ray not winning one of the top eight major prizes was with a blonde ray of 23.40lbs for Dean White.

Adam Taylor who travelled down from Ottery St Mary for the event had the best wrasse not winning a main prize with a cuckoo wrasse of 0.94lbs which was 75.20%.

Unusually this year the pollack prize was not awarded because there was no sizeable fish recorded.

Always a popular prize to win is for any anglers that travel more than 50 miles to the event.  A good number of these competitors support the event every year and long may it continue.  This year the prize of the rod and magazine subscription went to Alan Braham from South Wales with a small eyed ray of 10.10lbs which was 91.82%.

During the two day event most seem eager to win the pairs event and every year it is always very well supported in the hope of getting your team name on the very large shield.  This year was no different with the most entries we have seen for a long time.  This years prize for the pairs category was the brilliant Navionics phone App for both winners, a prize well worth owning in the boating world these days. These prizes were won by Antony Keith and Ryan Beeson. The total percentage for their best individual fish each was 212.75%. Not far behind in second place were the brothers from Sidmouth, James and Barry Trevett, whose score was 205.23%.

Everything came together for what was a perfect weekend with friends and anglers alike….. Roll on the Salcombe Small Boat Festival 2022!