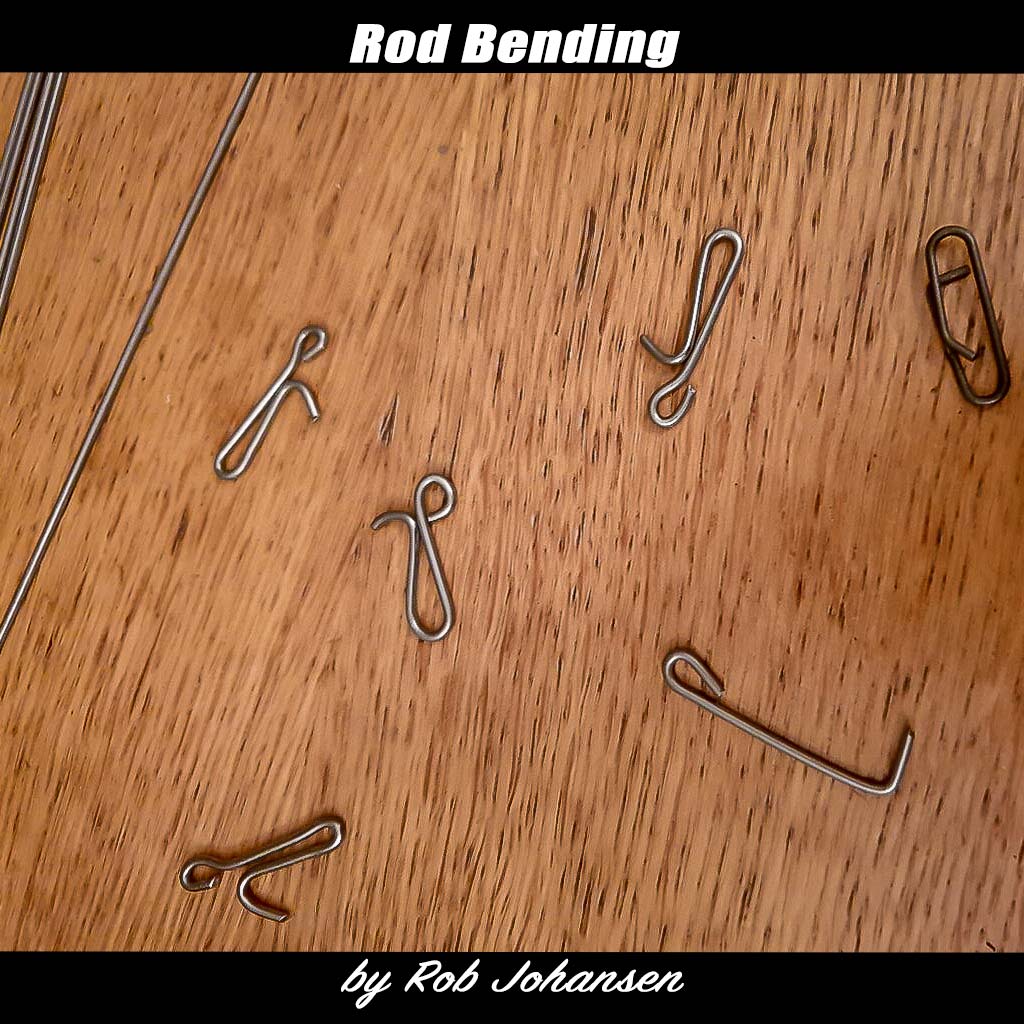 Unfortunately this isn’t the rod that may spring to mind when thinking about fishing but another one that fits uniquely into our sport.  After a dive in late summer I had collected 17 rigs from the seabed around the Adelaide wreck on Chesil beach.  As I was picking them up I noticed that someone, the same person, had been very accurate with their casting.  A handful of their rigs were inside the wreck.  These rigs really stood out.  The same 7oz SKM lead with thick wires and no rollers.  The wires were bent in and the clips didn’t appear factory made.  Hook snoods were long and made of a really heavy fluro of around 150lb+ with large heavy gauge hooks on.  Purely from analysing these rigs and where they had cast I knew the angler must have been of a higher calibre and targeting the monsters that lurk around our shores.  What stood out even more though was I couldn’t get the leads off the homemade quick link style clips. They were truly the strongest clips I’ve ever come across. Now, being one who likes to know everything about everything this got me thinking.

Fishing mostly mixed to heavy ground, I have put most brands to their limits and have at some point pulled all known brands open whilst using 60lb braid as main line.  Perhaps these were the 1% that snuck through quality control but once you’ve been let down by a brand it certainly does put you off them. Having this happen on a number of occasions now, I have stopped using certain brands but with the so called stronger versions not having a breaking limit on them, then no one can be held accountable for there failure when using beefed up gear. I use weak links of 30lb for leads that break when snagged, this heavier weak link really helps to pull through weed beds but still need clipping on, for casting.  The problem is once darkness falls I like to wire up with bigger hooks, so when these get snagged I generally pull for a break.  A number of times the hooks do snap but that is under great pressure. 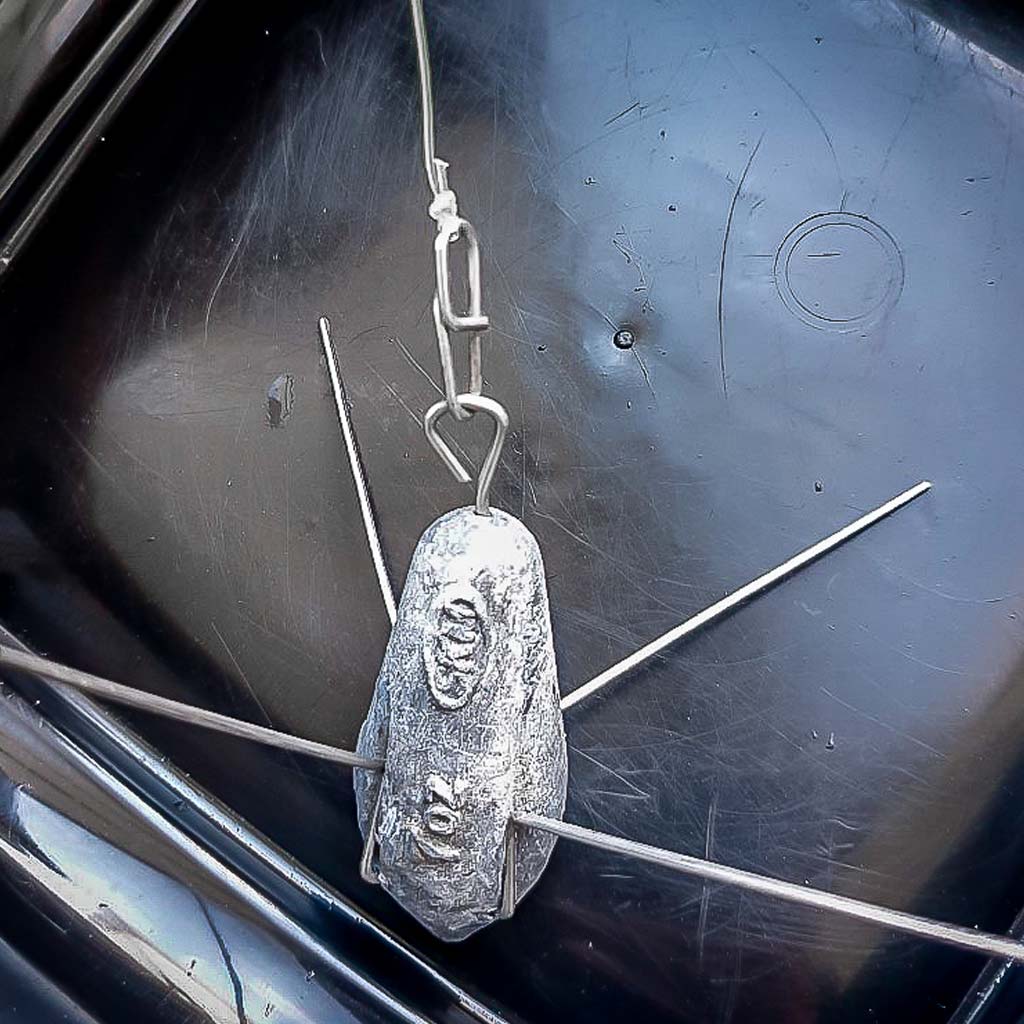 There are a lot of anglers that like making their own rigs and leads.  A rig that suits their targeted species for the sessions they have coming up.  The ability to learn new knots and having a greater in depth knowledge of our hobby is also rewarding.  Making slight adjustments and fixes whilst on the job is handy but most of all knowing you have the best quality terminal tackle ready for the job, with no one else to blame if something went wrong but yourself is probably the biggest part. Plus you can save a pretty penny by mass buying components and making your own.  Yes it does take time but like many others you make time, with the nights drawing in and sat in on a quiet evening in front of the telly it’s easy to keep on top of your rig wallet.

So after a bit of research, this actually isn’t anything new.  I’ve not come across it myself, nor had many people I know.  One of my fishing buddies, Leo, is an engineer and he had a few ideas. Then I got a lead on a channel that no longer publishes fresh content.  A fairly old set of videos shows you can to do this with some heavy duty round nose pliers, which they make look very easy. A quick online search of the usual market places, I placed a few orders of 1.6mm and 1.2mm 316 marine grade stainless steel rods and some round nose pliers.   Whilst at the same time Leo got to work on a little project of his own! 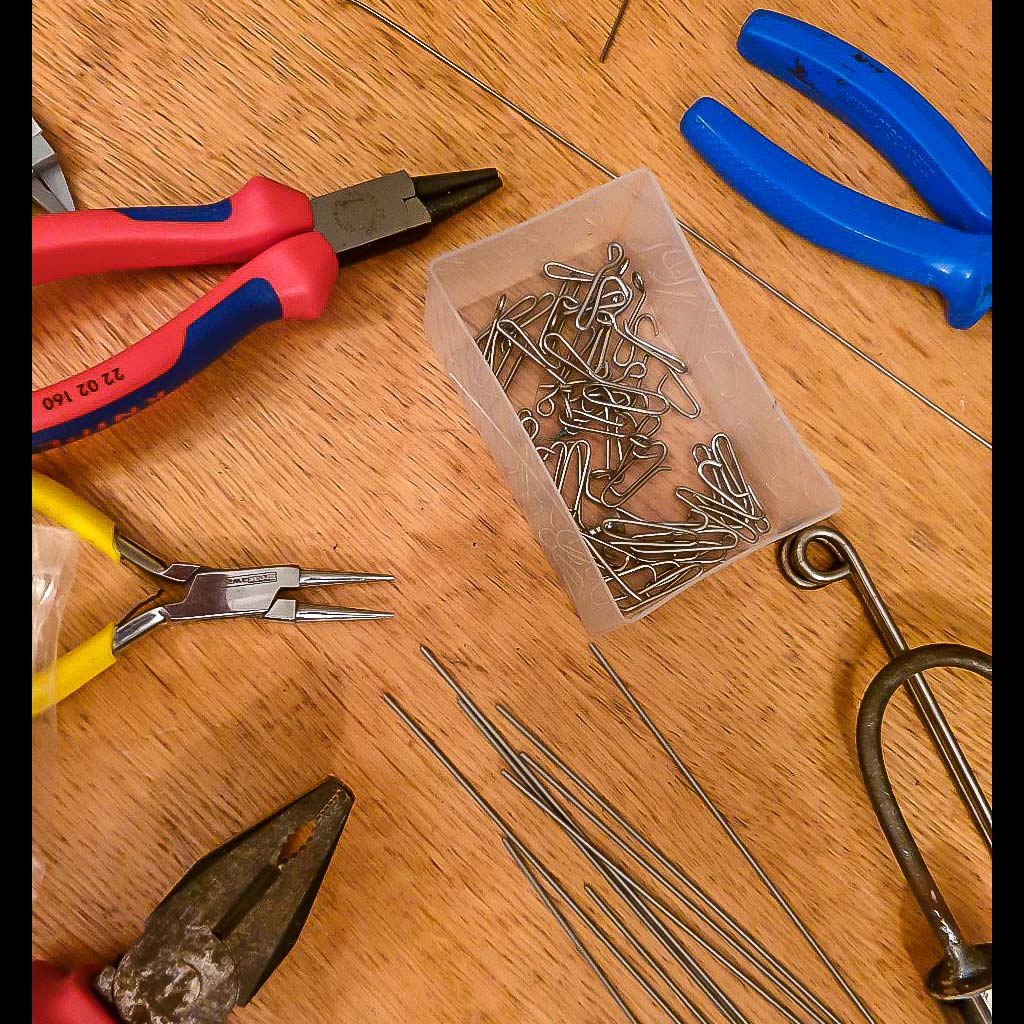 There are over 150 grades of stainless steel, of which fifteen are the most used. Stainless steels have a higher resistance to oxidation (rust) and corrosion in many natural and man-made environments, different stainless steels have different amounts of different metals in them, which make them great for all purposes.  The more carbon the metal has, the stronger and harder it becomes but that reduces its ductility. The first thing we noticed was how different each packet of rods were.  From look, colour, weight and half of them being magnetic. Maybe they had been coated for protection or flexibility but all we knew was there was huge range of differences in several purchases, when they had all been labelled exactly the same.  Now with us being novices at making small clips it took a little playing around before we were getting similar shapes.  The thicker rods were taking me about 5 minutes with the round nose pliers and a set on normal pliers to get them into the right shape where as Leo had made a small jig with roll pins in to bend the wire around and bang clips out, in less than a minute.  As soon as he showed me what he had produced I was interested in how such a simple device could make this process so much easier.

What he had done was drilled holes at different spaces in a piece of metal.  Because he was so specific, you can move the roll Pins into the relevant holes for the size of wire we were using.  This made a huge difference with being able to grip a tiny part of the wire to make fine adjustments, then finish with a couple of minor tweaks with some pliers.  This method proved we could make any clip, quickly and add a bait clip to all of them purely by curling the end around.  As we like to fish mixed to heavy ground a lot then having the least amount of terminal tackle as possible, at the cheapest price, is always what we are looking for.  So to produce a clip with a bait clip and hook on to place the weight for casting was soon thought up – an all in one kind of clip.  This may already be out there but we’ve not seen it and only came naturally whilst playing with all the different variations that we could think of. 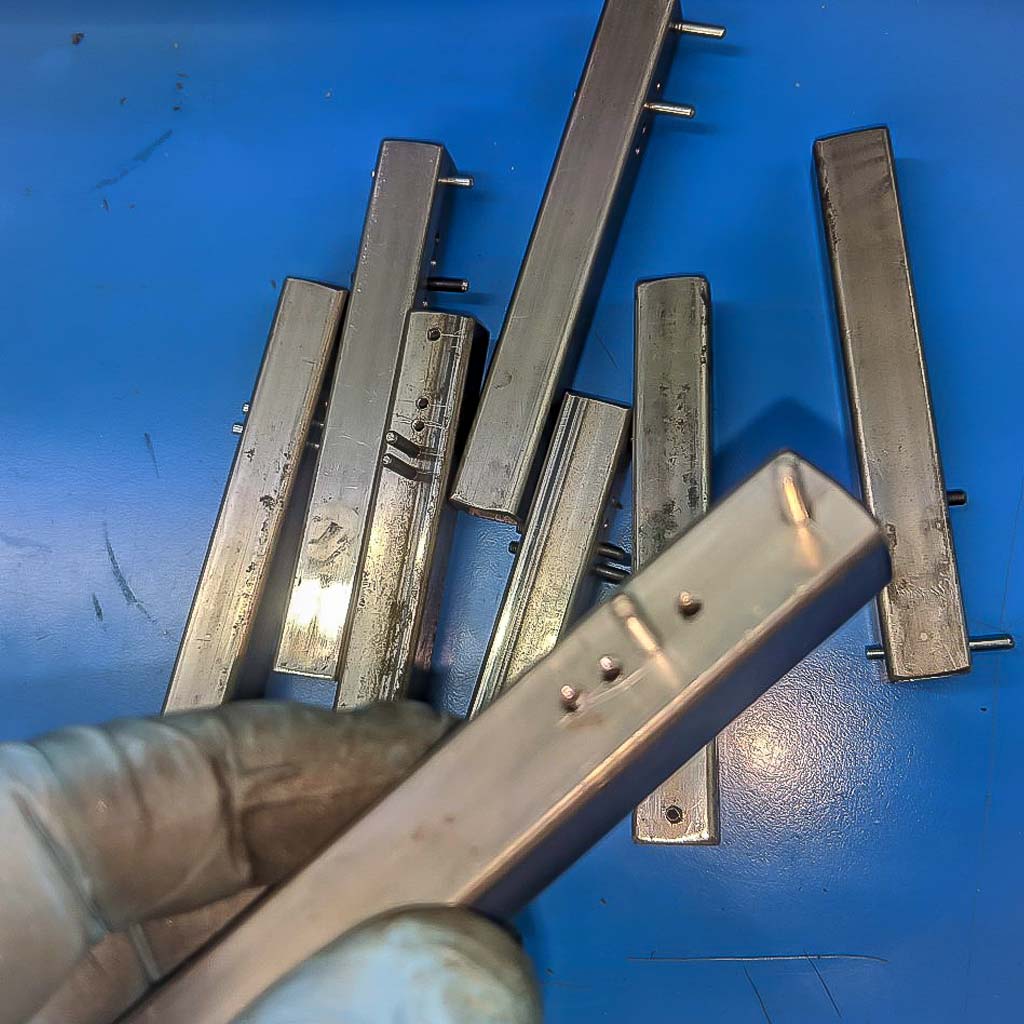 So the real crunch then is strength.  The smaller 1.2mm wire links claim to go to 35lb, which is fine for lighter gear, however the known brands that claim the extra / super strength don’t give a rating.  I got the scales out and tested a number of known brands. By attaching a piece of cord to a workbench then the clip and cord from clip to scales I pulled until the clips opened.  One did make it to 70lb but the rest all failed at best between 50 – 55lb and doing this a number of times, proved each brand to be consistent on those ratings.  With the market placed bought clips next on trial.  There were some really mixed results.  One went to 70lb another to 60 and a handful around 50lb mark for the 1.6mm.  What’s interesting is that some cheap Chinese Replicas, of 1.3mm coated, were holding to 50lb, which was on stronger known brands. The smaller 1.2mm were flexing around 20lb and opening mid 40’s.  After doing some quick sums clips are going for between 8 – 46 pence each depending if bulk bought.  Making your own would get them down to a fraction of the price but obviously time is money when making your own.

In conclusion, it really is all about the quality of 316 marine grade stainless rods you get.  As they are all under the same description when ordering this area is hit and miss.  With a pair of pliers, wire cutters and round nose pliers you are good to go.  Leo’s jig has made it a lot quicker and easier to get the shapes but it’s not something he fancies mass producing, maybe something in it for the driven entrepreneur.  If anyone does want advice in his findings then feel free to get hold of him on bassking5@virginmedia.com. I’m sure he could knock out some more prototypes.   With the ability to make your own clips, Bagnall bars, live bait slider and lead eyes or anything else you can dream up then this really is just an extension of rig building. 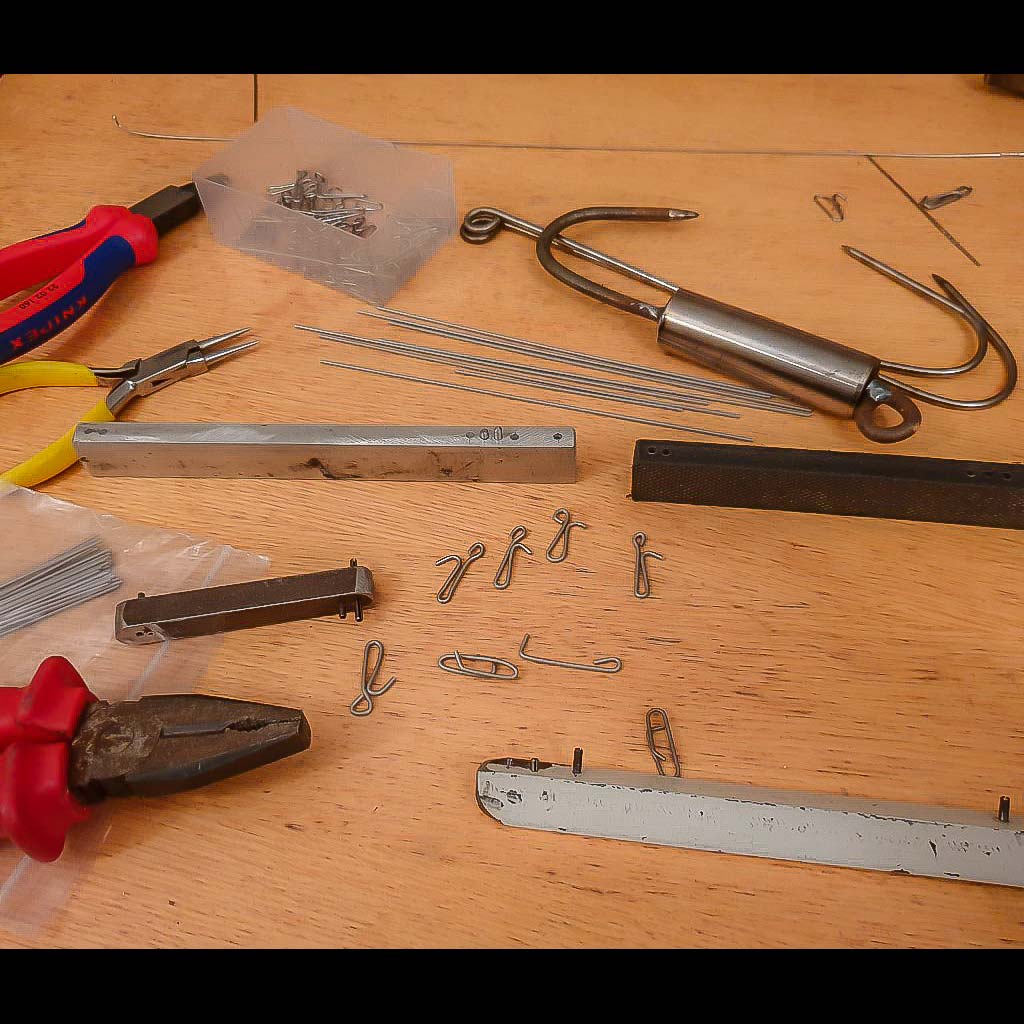 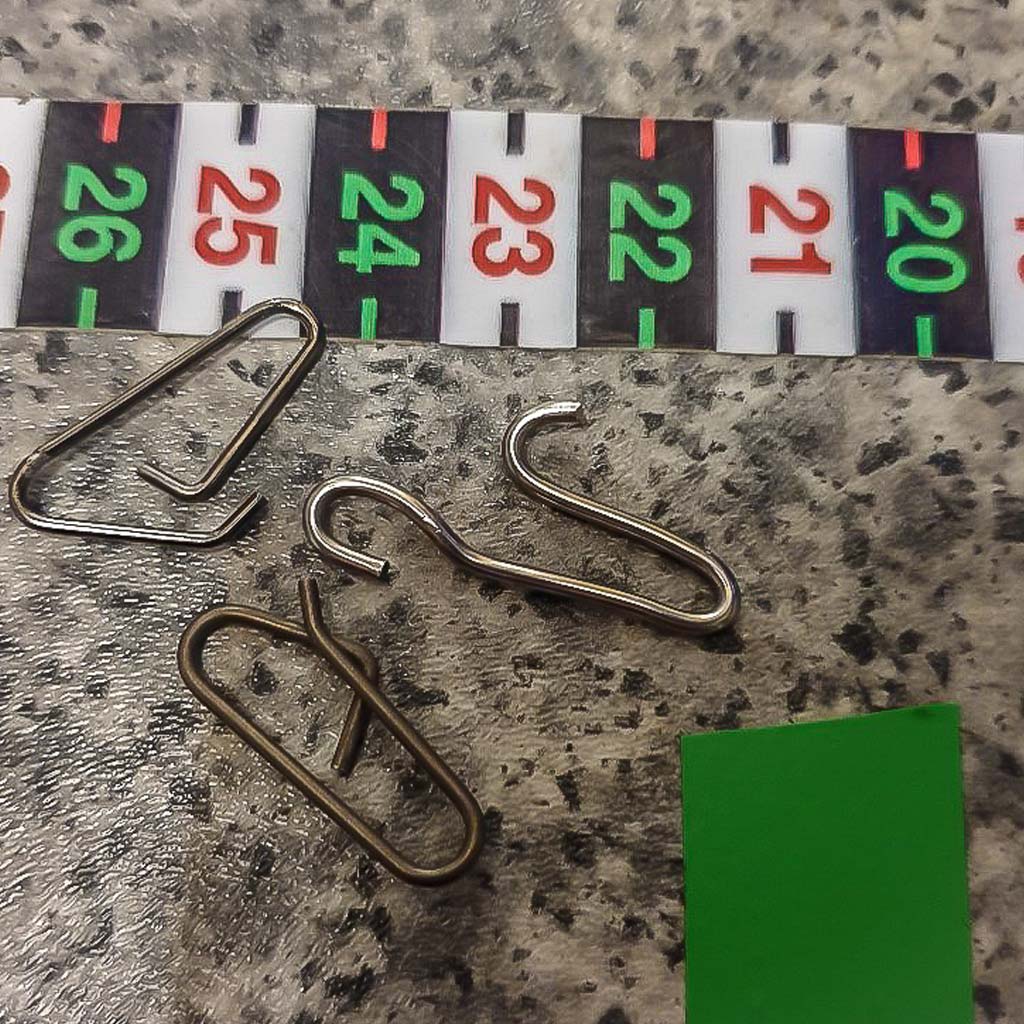 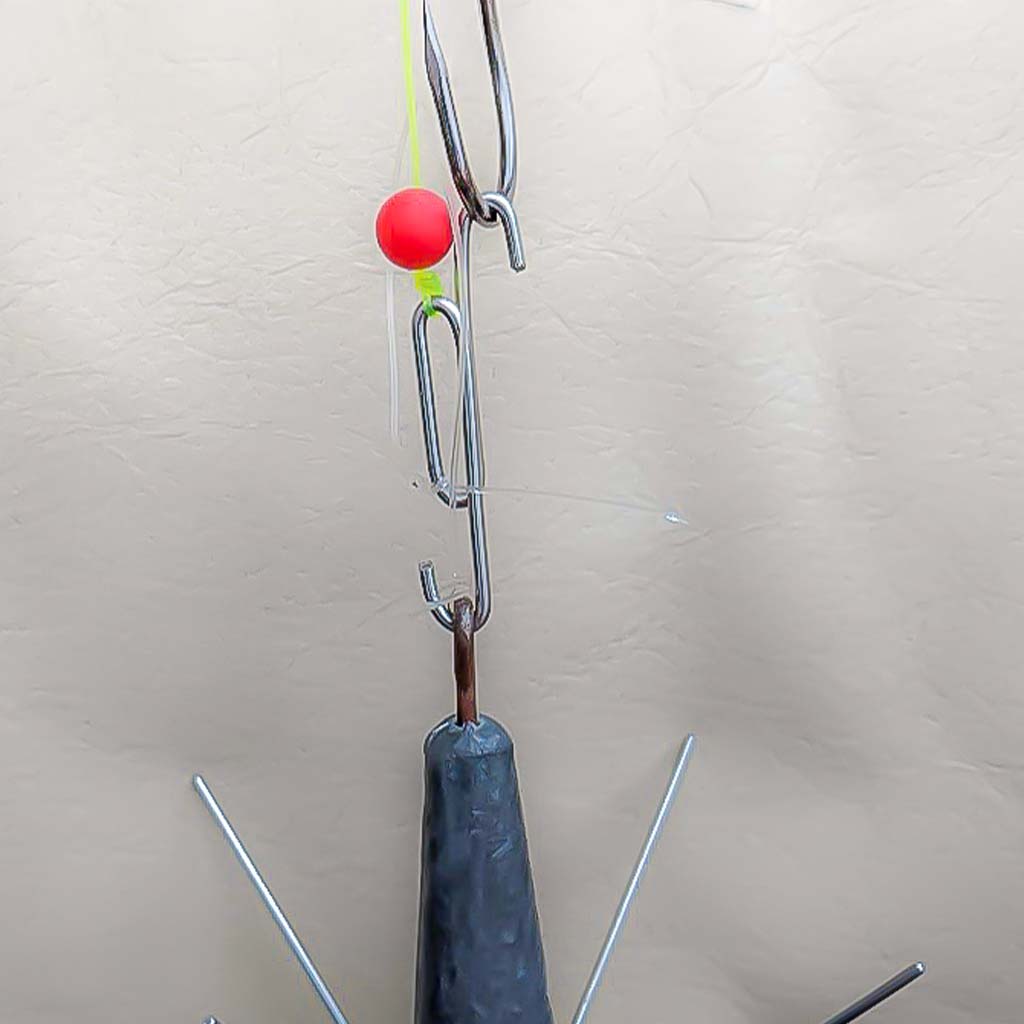 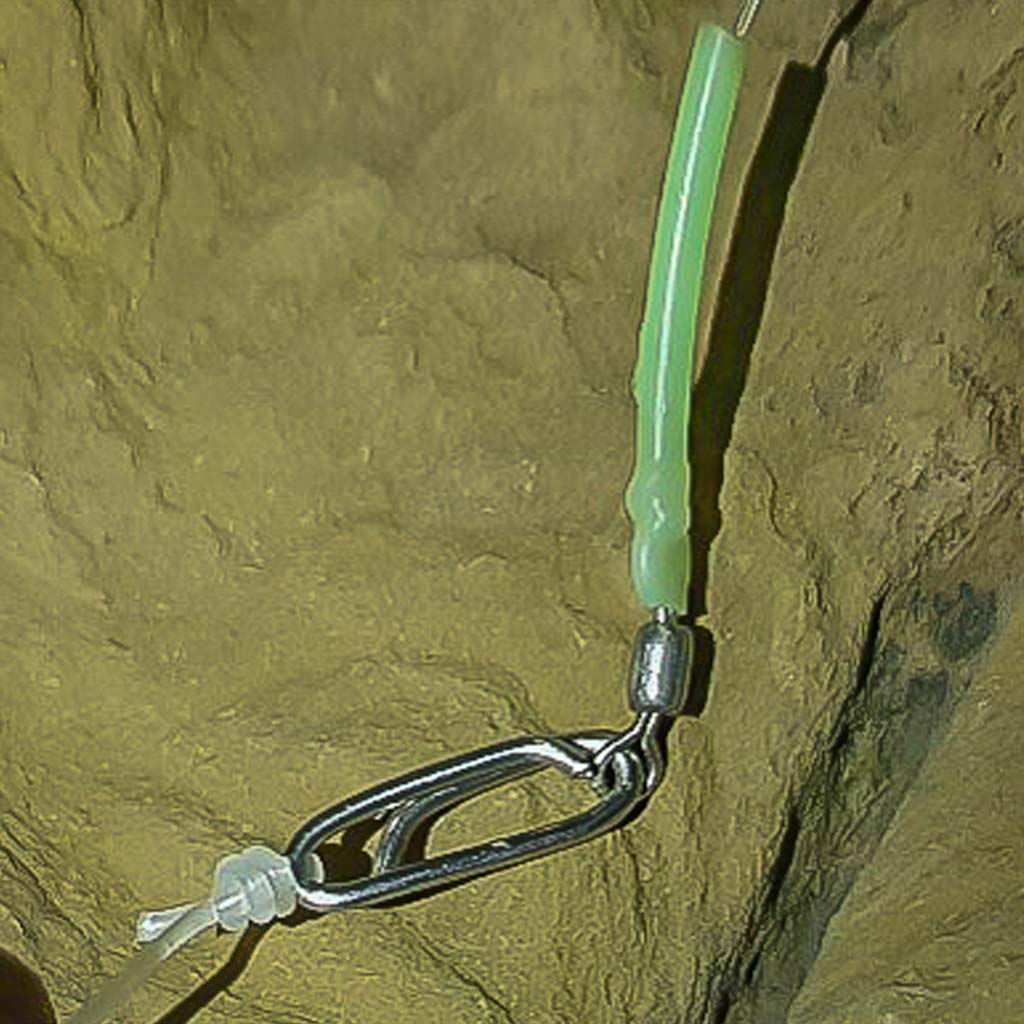 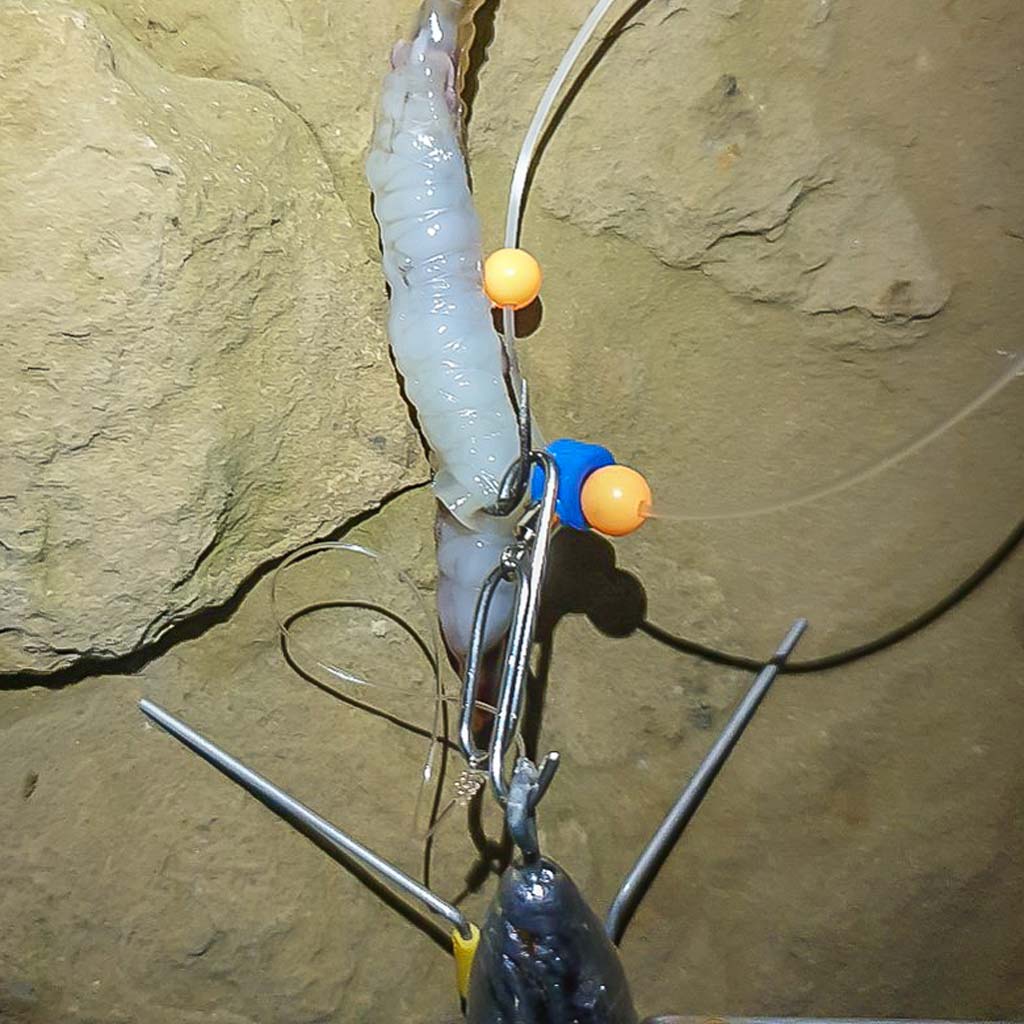 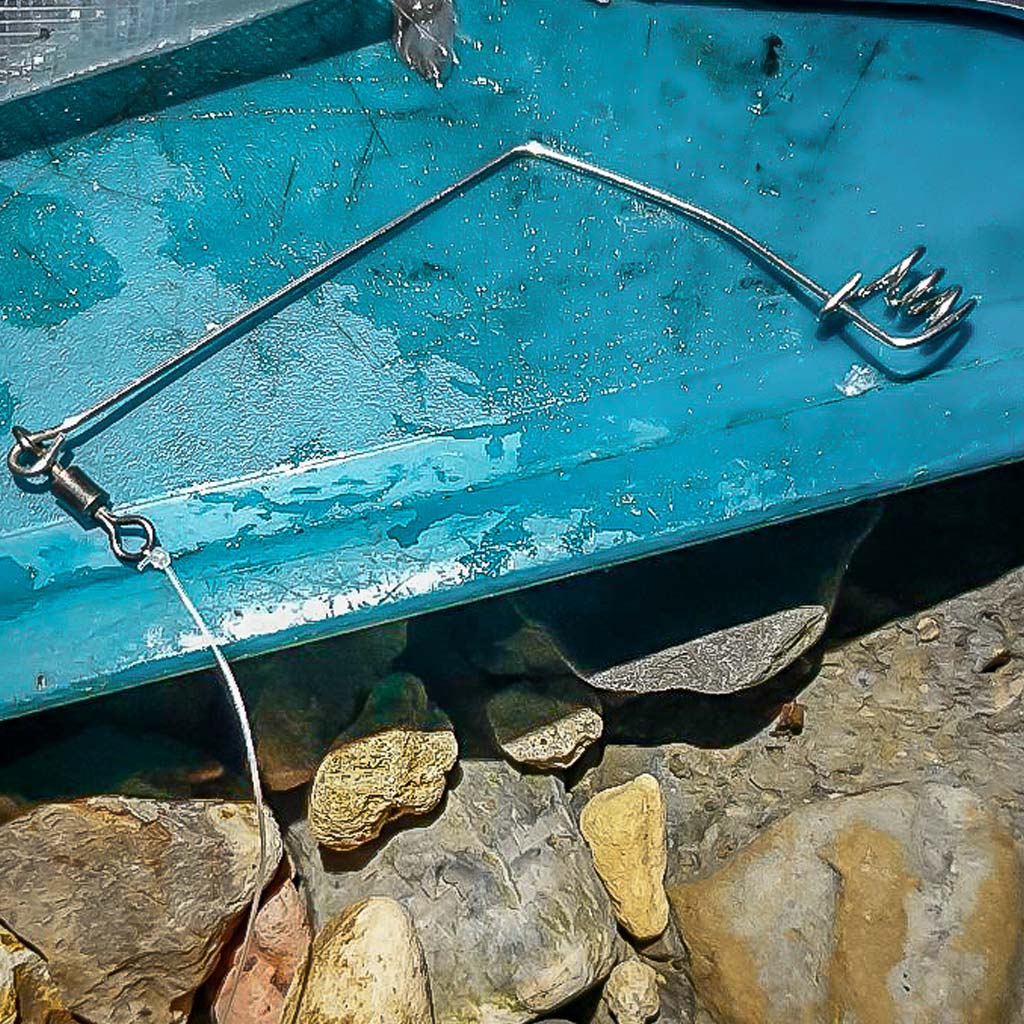 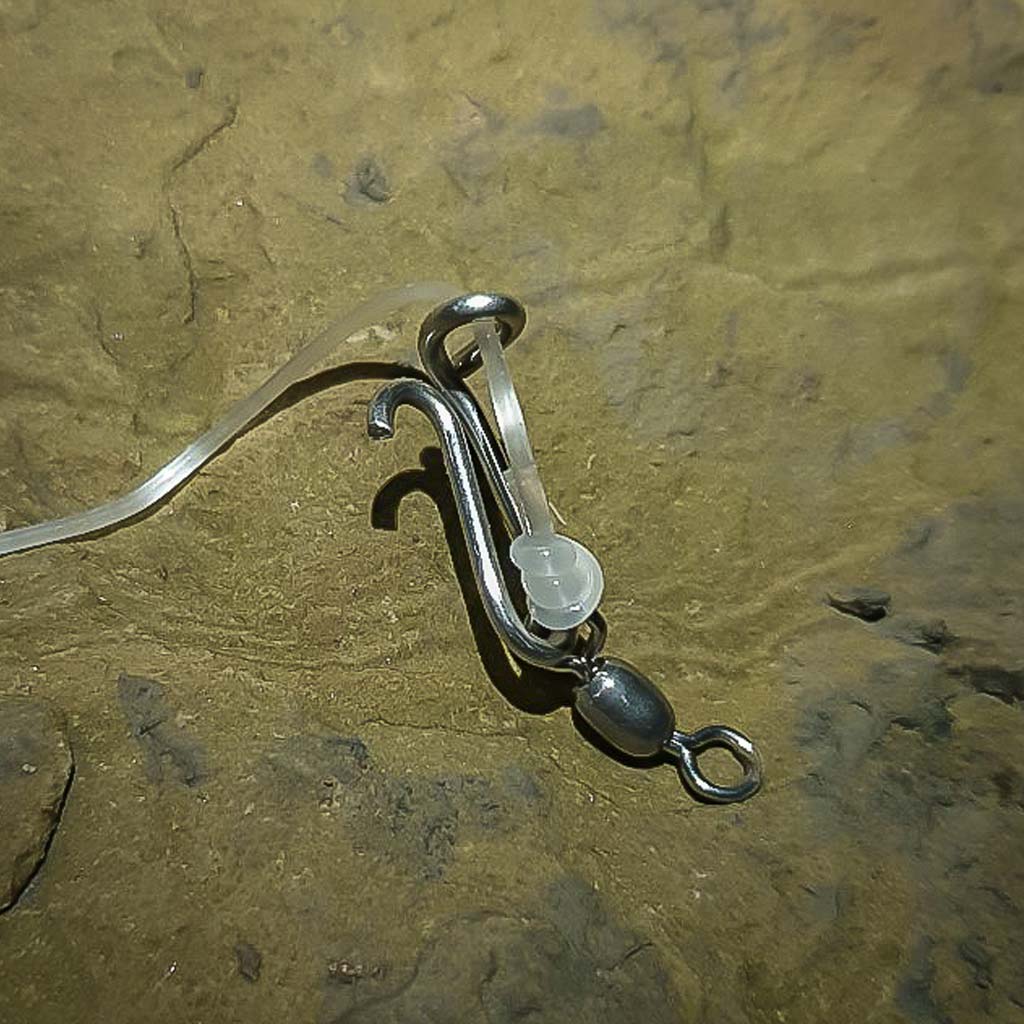