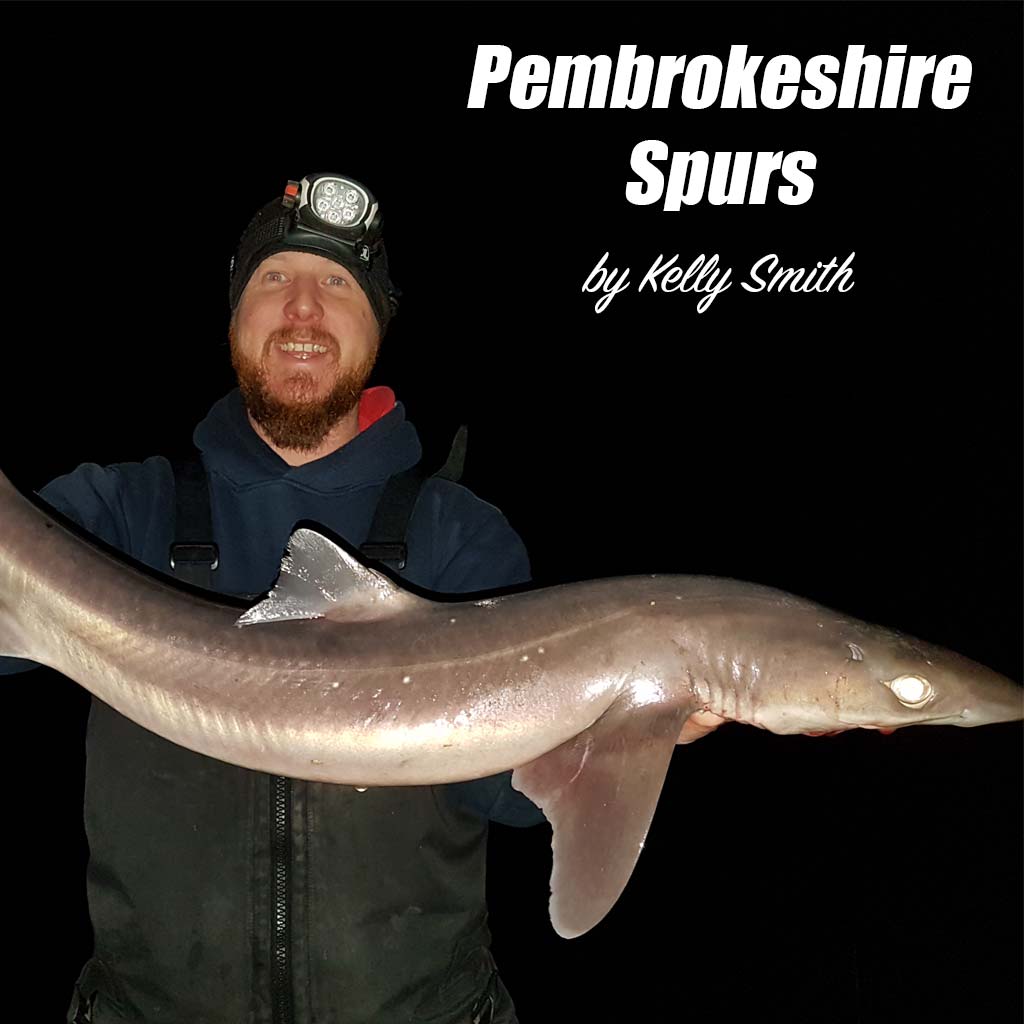 The weekend after a Scotland trip came around very quickly. With horrendous weather and being full of cold, I had no plans on fishing whatsoever. That was until my mate Dean phoned me up on Sunday morning, letting me know about his session the night before. Unfortunately, he had lost a good eel and a huss close in, as he struggled on his own with the rough seas. He also mentioned he got bitten off close in by a spur dog.
Knowing spurs were about, he wanted to get back out that night, but didn’t fancy going on his own again, with the forecast exactly the same as the previous night. Landing fish alone would be almost impossible and asked if I fancied it. I didn’t think twice, I had been after a spur from Pembrokeshire for some time, but never seemed to have much luck.
So plans were put into motion and I arranged to meet Dean in the car park at last light. I won’t lie, on the way up, getting blown from lane to lane and feeling like death I was really starting to question my sanity. Knowing we would have very little shelter from the wind, coupled with a late tide and work early the next morning. It is always worth the journey, in the hope of catching that one special fish.

I arrived at the car park before Dean, watching the one big tree blowing all over the place. Dean soon pulled up, as he got out of the car the first thing I had to ask was what were the conditions like last night? He just laughed and replied with not nice, but fishable. So knowing we were in for a battering from the elements, we made the trek over to the mark. We set up well above the water, out of the reach of the swells, either side of a point where we would be likely to land a fish. We fired fresh baits out, well as far as we could with a horrid side wind, taking a massive bow with each cast.
It wasn’t long before we were both into fish. Struggling to see the bites, due to the conditions, we were changing baits every 15 minutes. Dean was using 200lb mono and I was using 175lb 49 strand wire. But it soon became apparent that the dog fish didn’t care what it was, as long as it had a hook they would take it. After about 2 hours of being plagued by speckled sea rats, the wind changed and was a little more in our favour. I noticed two pull downs on one of my rods, which quickly dropped slack. I wound down as fast as I could, but couldn’t connect with the fish. Upon checking the bait, you could clearly see the bite mark of a spur, totally different to what a tope or a huss would leave, almost like it had been sliced open with a razor. As I am casting out another fresh bait, the same happened to Dean, a slack liner but again couldn’t connect with the fish. 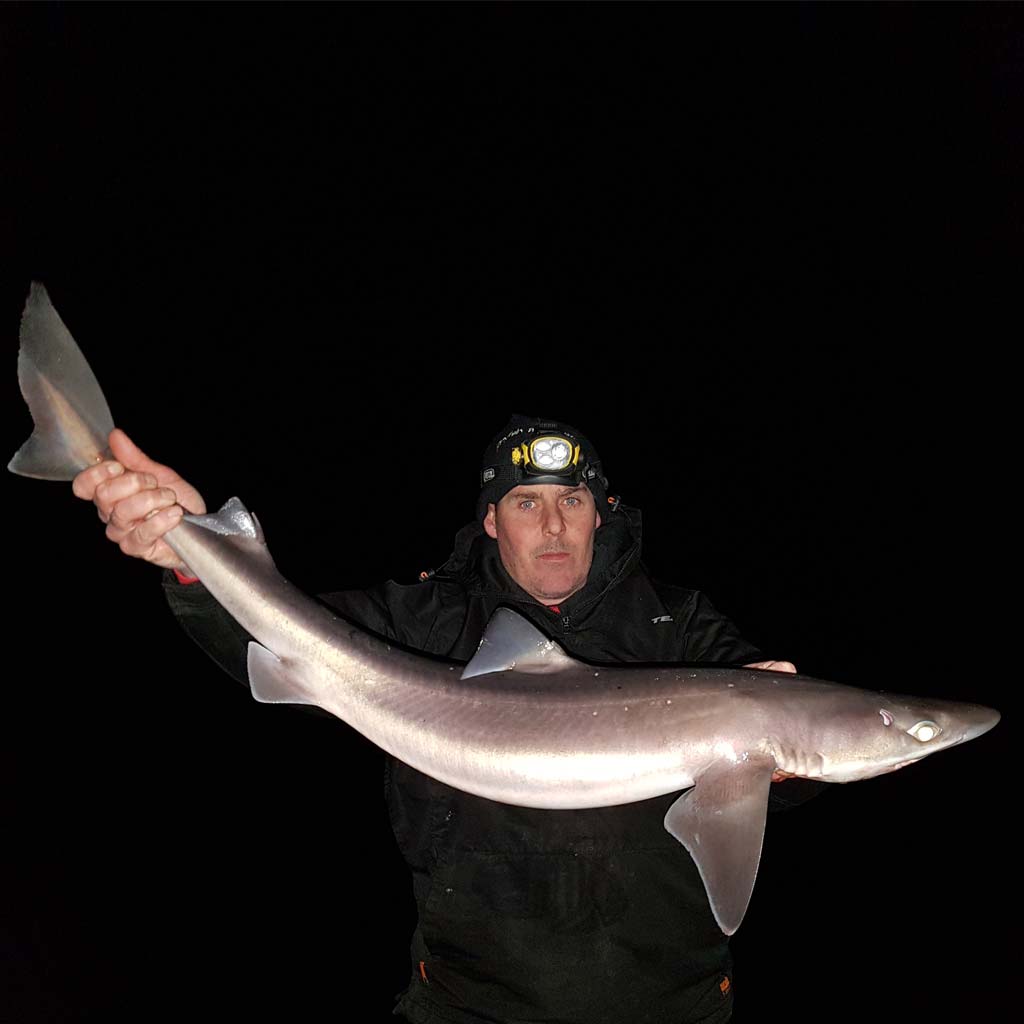 Within minutes one of my rods dropped slack again, but this time as I wound down I felt the weight of the fish and set the hook. It didn’t feel like a massive fish, but there was a bit of weight there. We weren’t sure whether it was a huss or a spur, until we saw the eyes light up under our head lights. Dean quickly hand lined it up and then grabbed the scales. It wasn’t massive at 8lb 10oz, however, I was more than happy to get my first Pembrokeshire spur. A quick photo for the album and then off it went.
Straight away Dean was in to a fish, this one seemed better and looked like it was giving a good account for itself. Again, the eyes lighting up under the headlights, a better spur dog of 10lb 8oz. This then turned into a hectic few hours, at some points we were struggling to keep a bait in the water. Dean managed to pull out another 3 good spur dogs, one of 11lb and two going just over 12lb, which all gave a good scrap, as well as dropping another 5 or 6. Meanwhile, all I was doing was dropping fish left, right and centre. I must’ve missed 6 or 7, if not more. I just couldn’t make contact with the fish.

With the swells slowly starting to ease, with the ebb in tide, I decided to scale my baits down, to see if it would make any difference. As the spurs only seemed to be taking mackerel bait. I opted for a fillet of joey mackerel on one rod and a tail half of joey on the other, rather than just a headed joey. Shortly afterwards my rod with half a joey dropped slack again. This time I managed to connect with the fish, when leaning into it, it pulled back. At one point I thought I may have been in to a good eel. Until we saw the eyes glowing under the head light. We could see it was a good spur, quite possibly the biggest fish of the night. As luck would have it, the swells had picked back up, making it hard work for Dean to land it. As Dean grabbed the leader, a swell took it round to the left, then the back wash took it back to the right, taking the line around the rocks. Lucky enough the next swell freed it. As Dean is hand lining it up, by now further round from where we had been landing fish all night, it got caught under a ledge, thankfully Dean knows what he was doing and didn’t panic. As he passed the fish to me, you could see it was a good fish, definitely a new PB for me, going 13lb 3oz, so a few more pictures for the album and off it went. The spur bites went dry for the rest of the night and the dog fish to come back on the feed.
After another hour or so, we decided to call it a night, both happy with our session because we were only expecting a spur between us, if we were lucky! But to leave with 6 fish, 5 double figures is a session neither of us will ever forget. 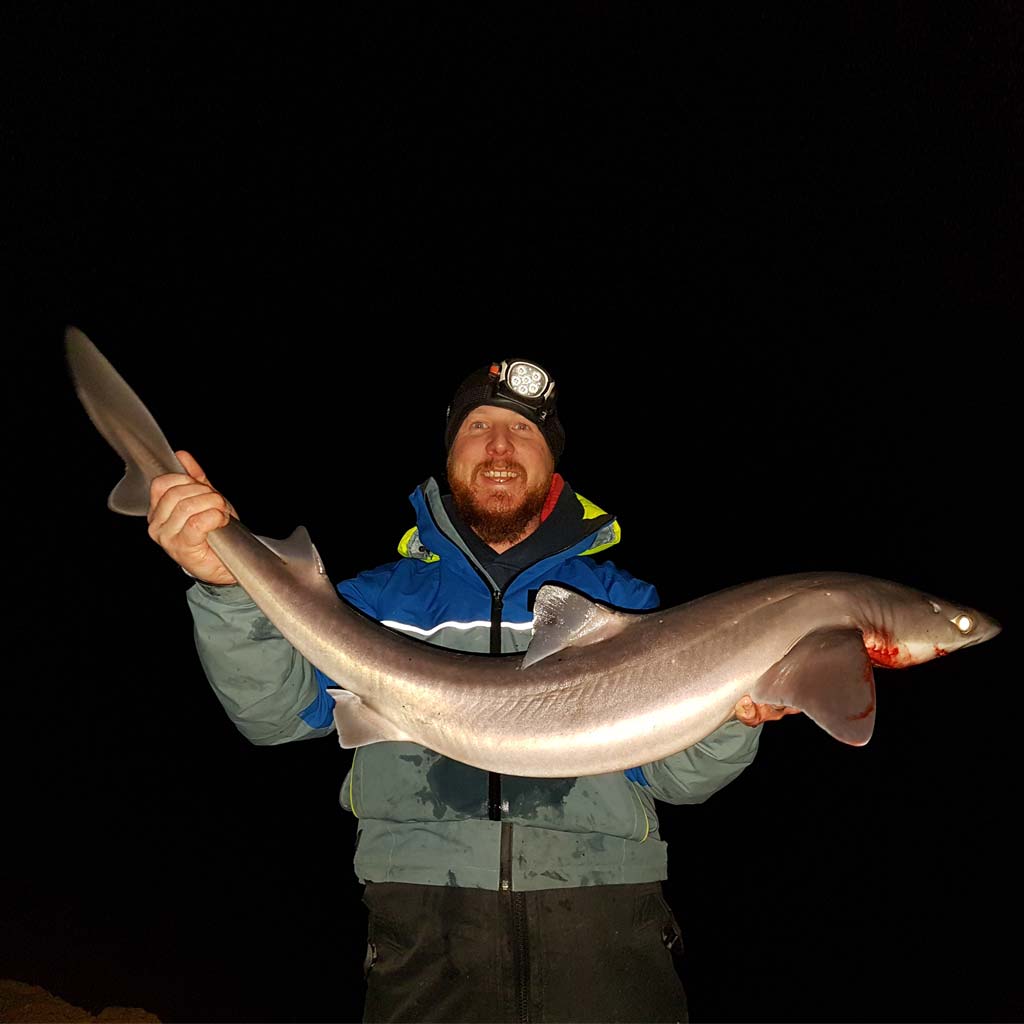 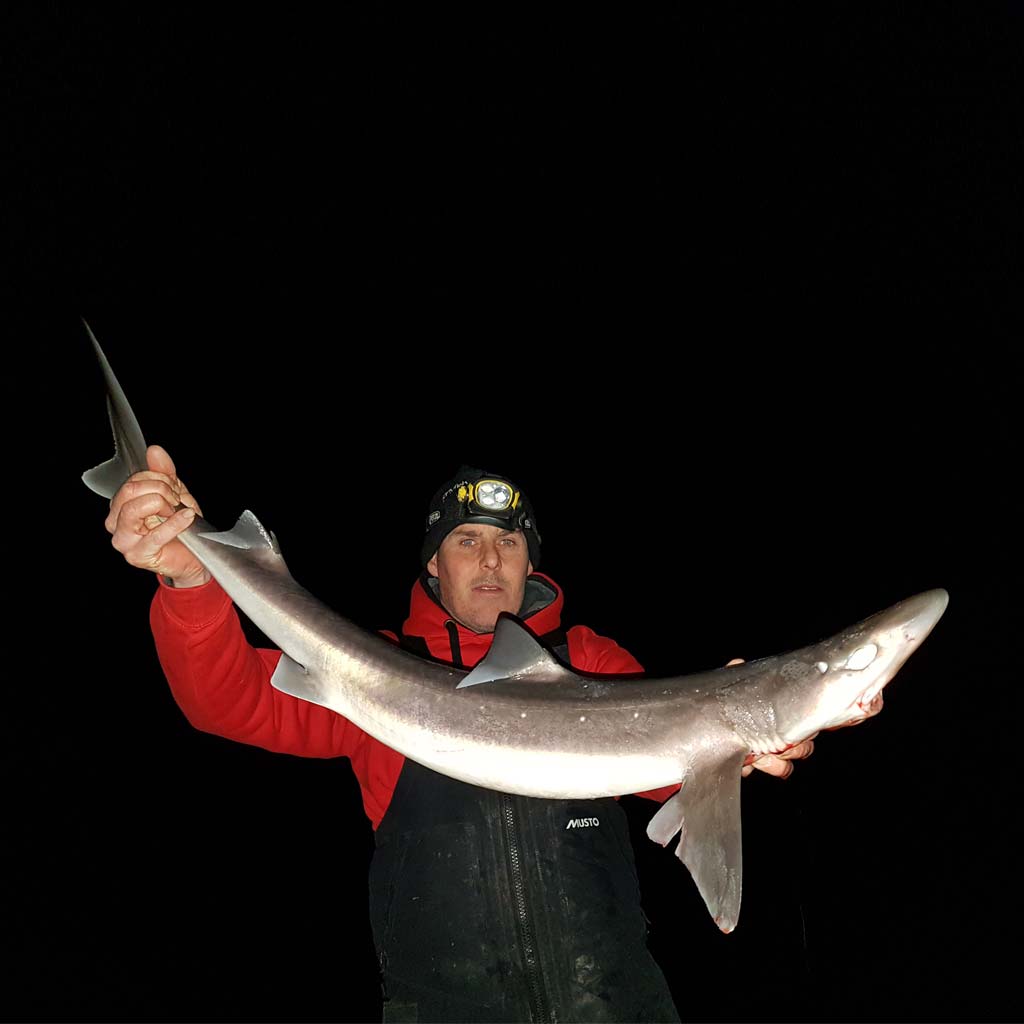 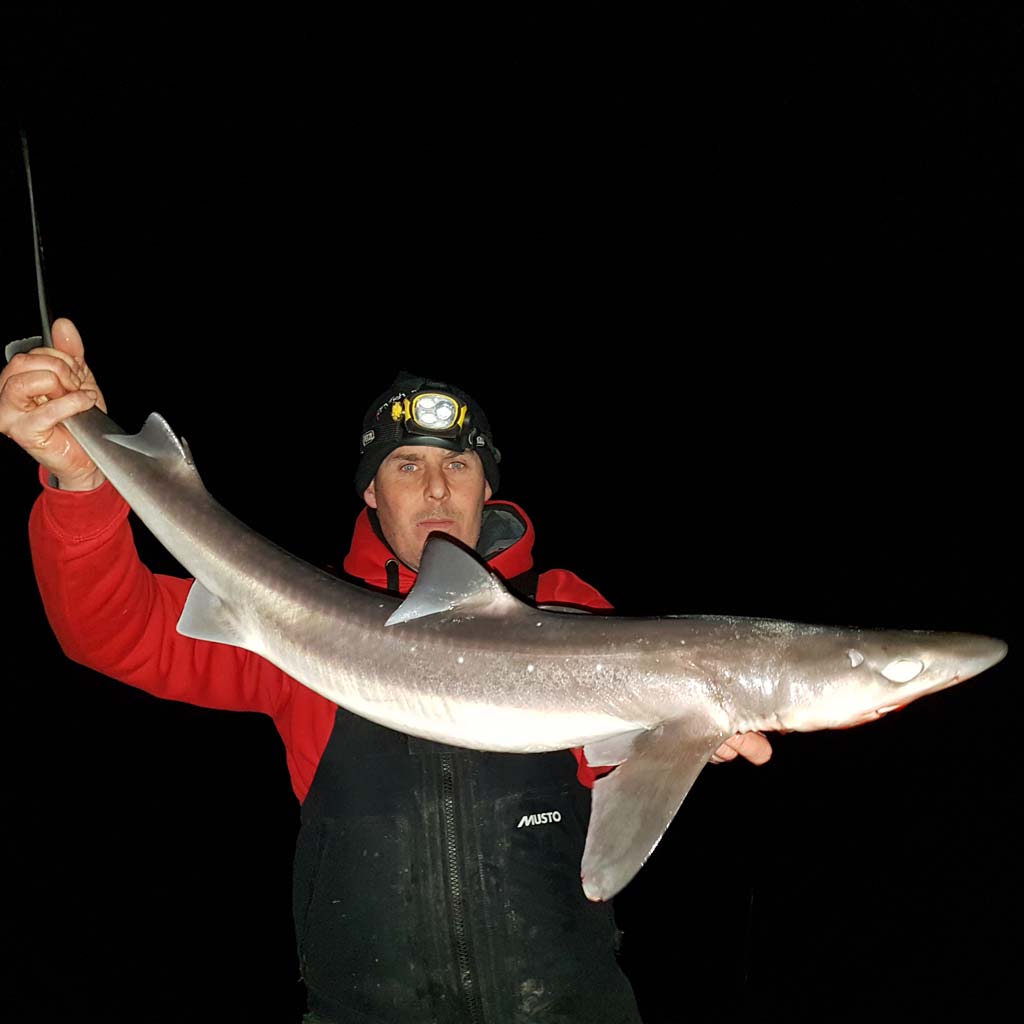 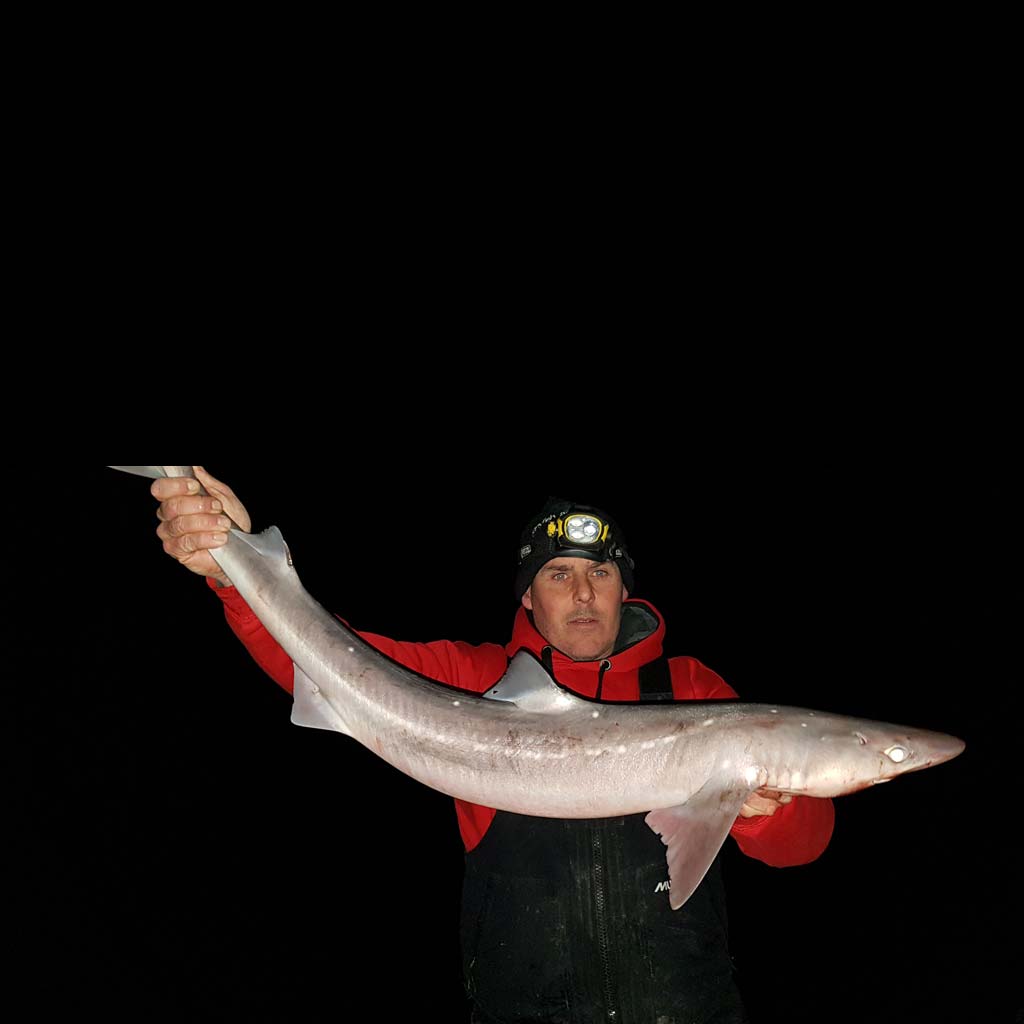