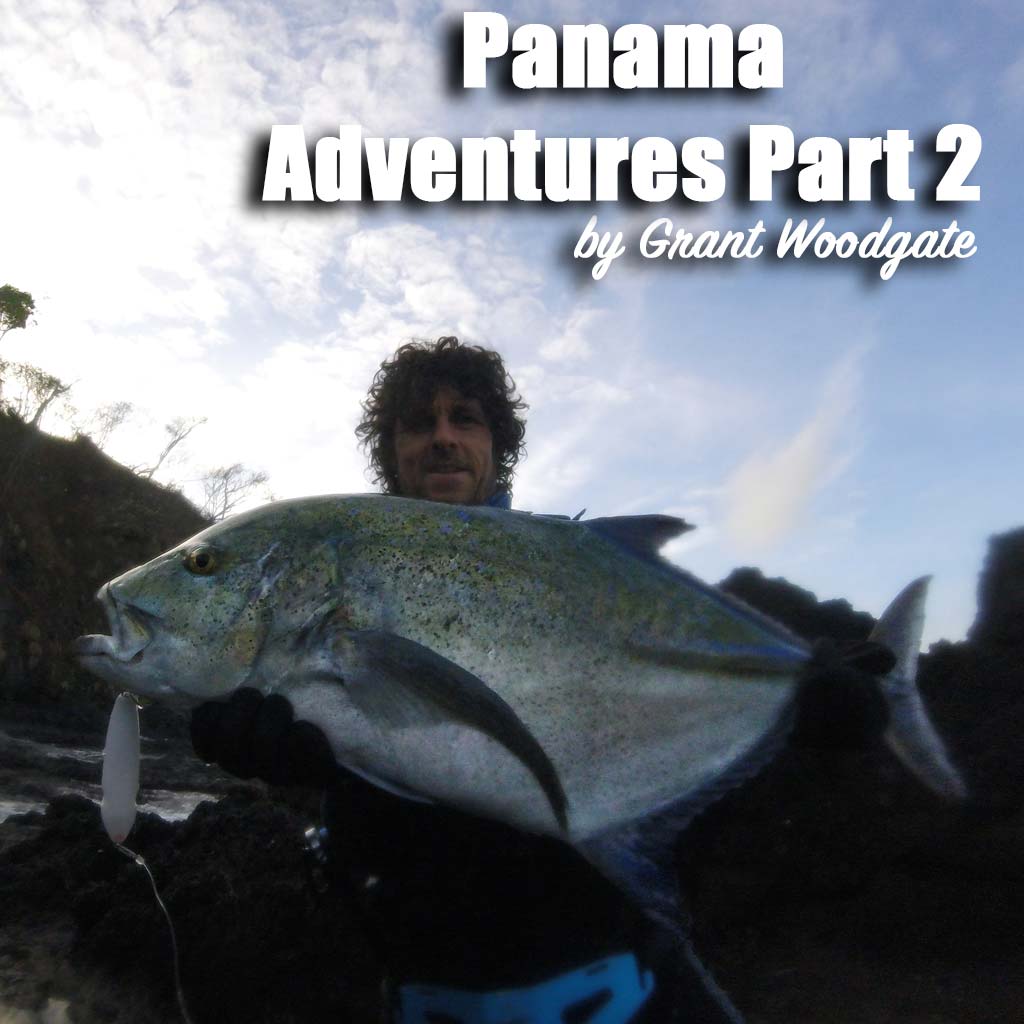 I had often passed a small river mouth in the most beautiful location on the way to the point, with freshwater running down from the mountains into a very small river-mouth. It was the start of rainy season, and within a few months this would turn into a small estuary.

I knew that snook were a real possibility around river mouths, so  set off with my lighter tackle setup up in search of them. On the walk to the coast I would pass an array of birds of prey, lizards, monkeys and other wildlife, enjoying all the amazing sounds they made as the morning broke! Meanwhile, the swell was perfect at around one meter!

I started fishing the beach with its extremely steep shore break meaning the water was quite deep and coloured on the inside. After finding some nice rocks on one side, I managed to work my way out to a large rock situated next to a nice stretch of reef.

Just 10 minutes into casting and I had a hit on the Enticer Tweak! Just three meters out, a large snook smashed the lure coming half out the water only to miss the single tail hook I was using! I initially thought it was a Cubera Snapper.

I cast again! Boom, another hit from the same fish, but still no hook up! I soon realised that when targeting fish that are coming up to hit the lure from below, it would be a real advantage to have rigged it with the belly hook as well! 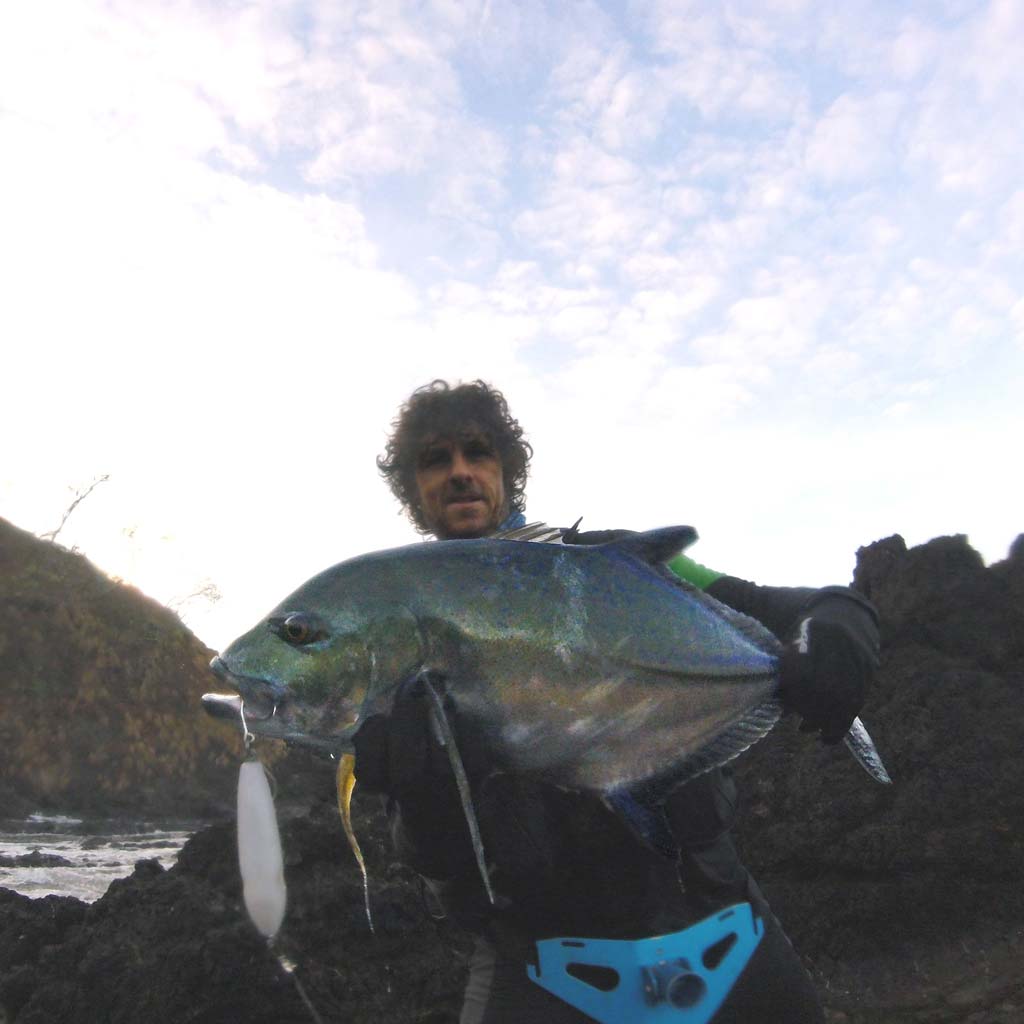 With just  a couple of days of the trip left I decided on one more session at the fingers where I had done so well with the Bluefin Trevally. Again it was worth the early start and long walk, as I was rewarded with two lovely Blue Fin. As the first one tried to break my line on the reef, I was forced to follow it around on the slippery rocks.

Halfway through the battle I slipped banging my leg hard. Fortunately nothing was broken and I was able to land the fish and take a quick photo! It’s always a reminder of how careful you need to be when rock fishing alone. The second fish came soon after, and as much as I love fighting these blue fin, I now couldn’t help thinking about how nice it would be to land a snook! 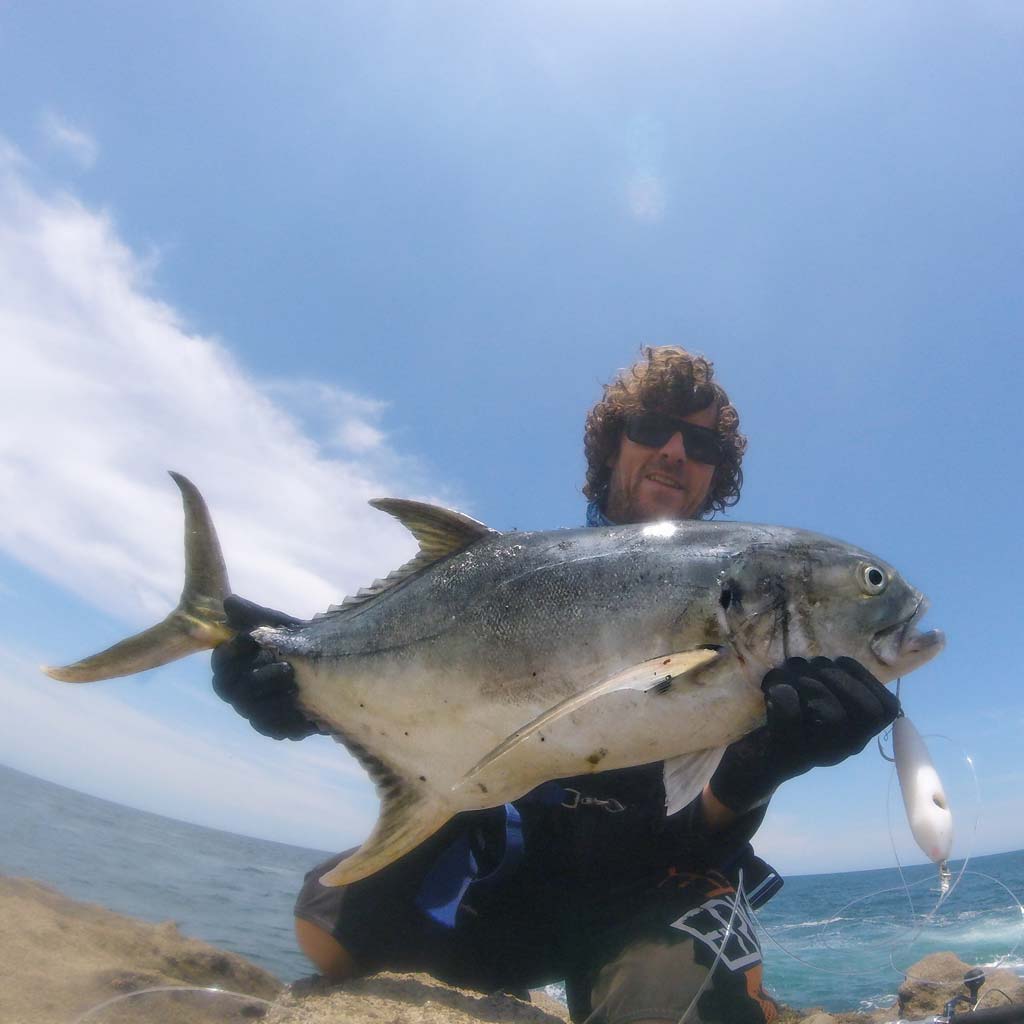 The next morning, with snook on the mind, I decided to return to the river mouth.

With similar conditions to the previous session, I made my way out to the same rocks where my lure had been hit! This time whilst casting right out to the point, another Snook took the lure! I struck hard but within seconds it jumped and was off again! What’s going on I thought!

As it went quiet I moved a few hundred meters along to the entrance of the small river mouth! The bottom consisted of small boulders, with nice little waves running up into the freshwater. After spotting shoals of small bait fish in just inches of water I thought it looked a good potential spot!

few casts in and something hit the 50g Tweak bait! This time it stuck! It wasn’t a snook but a nice Cubera Snapper hooked in around knee deep water! I quickly took a photo and was back out again casting into the shallow entrance!

The next hit was hard! Instantly the Snook leapt out the water shaking its head with gills flared. What a sight! Just 20-25 meters away I knew this was one big snook! On the second jump it shook the hook free! I couldn’t believe it! These fish seemed to have very boney mouths and no matter how hard I struck they seemed to just shake free!

A few casts later and another trophy sized snook hit the lure immediately jumping and shaking its head! I’ve no idea if it was the same fish but this time It’s razor like gill raker which is literally like a serrated knife cut clean through my leader as it jumped! I couldn’t believe it! I rushed back to where my bag was and quickly rigged up another lure, this time an Enticer Tweak with a natural dark skin swap! 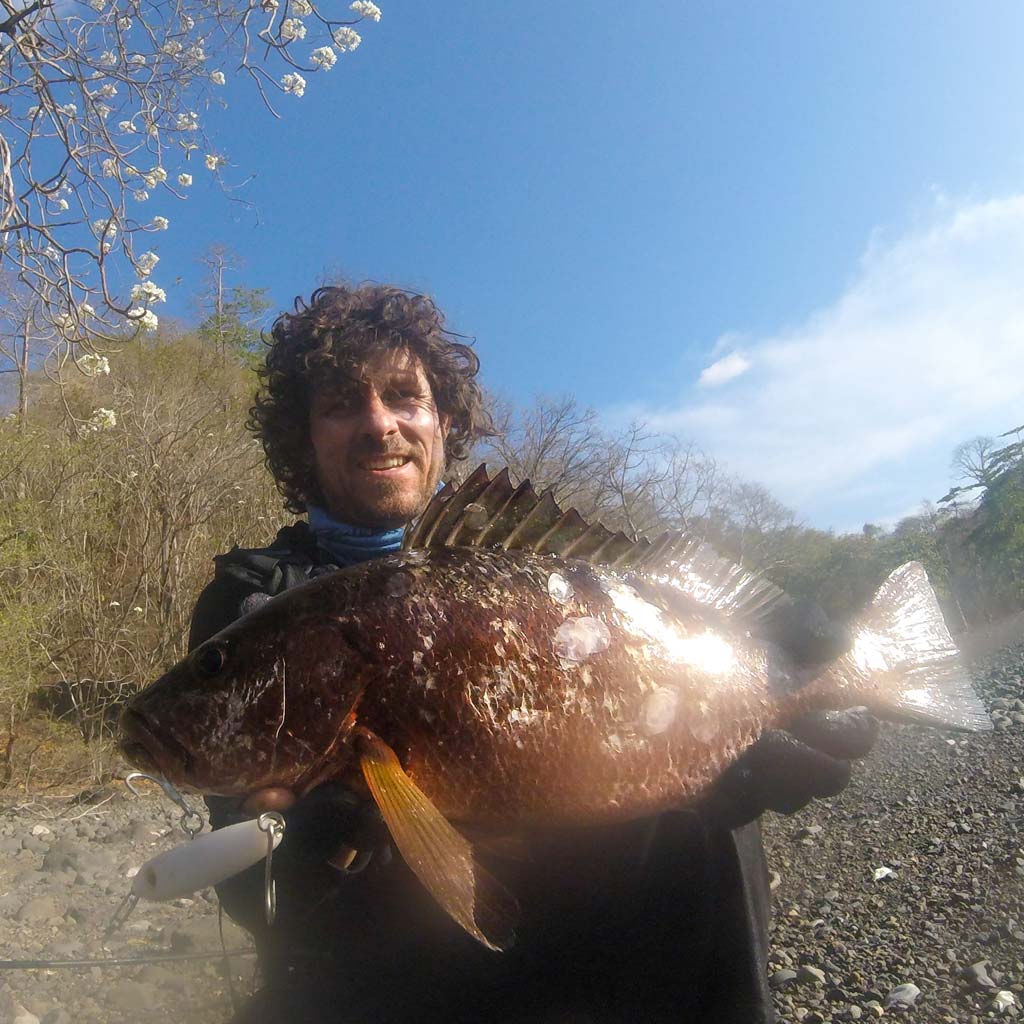 The sun was getting higher and I wasn’t sure I would get another chance! Casting close to rocks and tweaking the lure through I had a splash of water behind the lure, a few casts more and I was on again.

Instead of making a run, again the first reaction from this snook was to jump and shake its head to free the lure! As great a sight as it is watching a snook burst out of the water, I was rather hoping this one would come in peacefully so I could at least land one!

I struck hard and kept the rod tip high keeping it away from the shallow rocks! I don’t think I can remember being that nervous about landing a fish!

So after a few more acrobatics from the fish, I was relieved when I could finally grab the leader and get a photo!

Although I only caught two fish, it ended up being my most enjoyable session of the trip! As the trip came to an end, and I made my way back home I had already decided I would be back again. The location and atmosphere made for a real fun fishing adventure, and after experiencing the snook I was definitely hooked and would be dreaming of landing that big one! 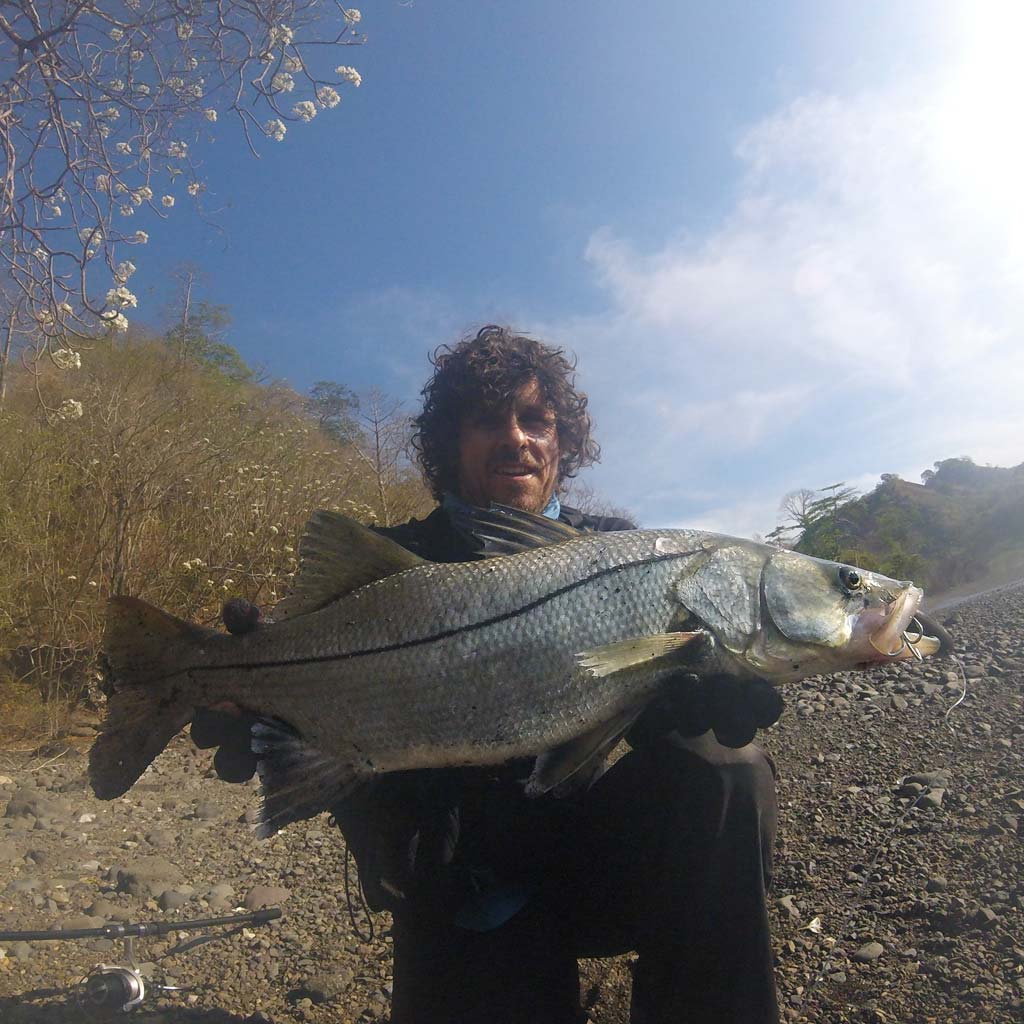