Menu
PrevPreviousGetting Hooked Up: With Steve Ace
NextFrom trout to bass and the Channel mudNext 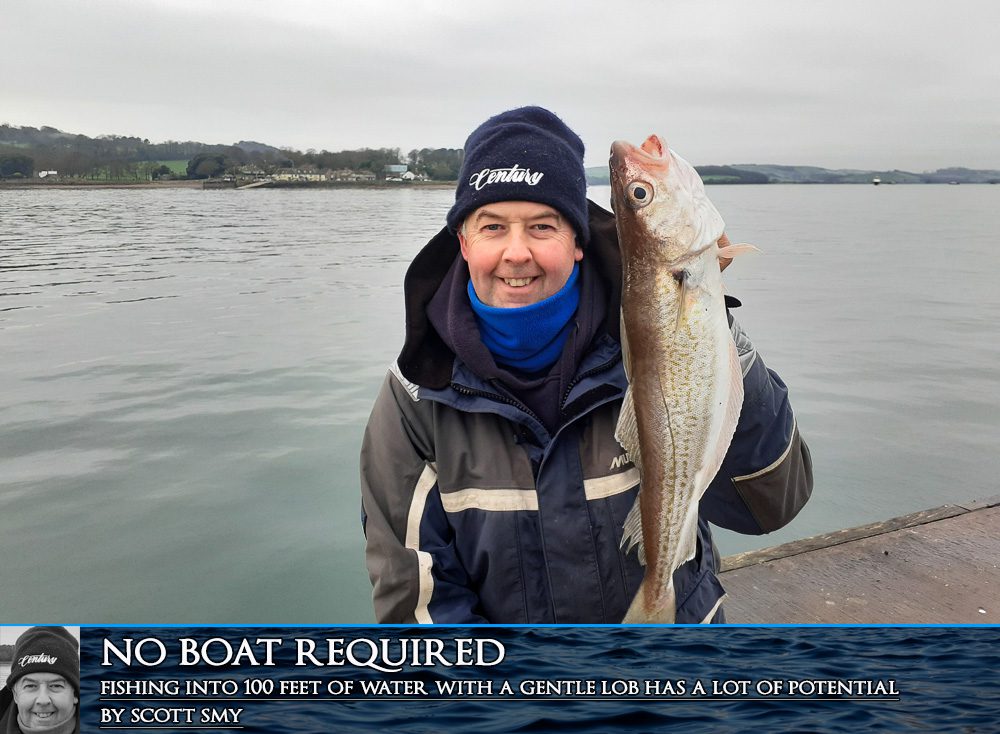 With the outside temperature on the car dash indicating -2 degrees centigrade and a bank of freezing fog having enveloped the River Tamar, the three hundred yard walk along the pontoons out to my final fishing spot through the myriad of gin palaces was one made with a certain amount of trepidation. It really was Baltic and the rolling mist blowing through on the very light breeze made it look more like a scene from Pirates of the Caribbean.

For those of you who don’t know, Plymouth Sound and the River Tamar which flows into it provides some great angling opportunities due to the extremely deep water that can be found very close to the foreshore. Whilst calm and settled conditions can often result in shallower beaches and rock marks becoming totally devoid of life, such conditions have little impact on the Tamar due to its depth and I was looking to exploit those conditions to work in my favour today.

I decided on the title of ‘No Boat Required’ for this article as it is exactly that! Fishing into depths of around ninety to a hundred foot of water some two hundred yards out from the shoreline, without having to step onto a boat- too good to be true? Probably! Myself, along with a limited number of other anglers in Plymouth are lucky enough to have an angling permit to fish from the southern boundary breakwater structure within Mayflower International Marina.

The Marina sits just within the River Tamar, a short distance from the infamous Devil’s Point to the south east and Mutton Cove to the north west. Just a short cast (I say cast but that’s not really necessary) from the breakwater puts you in a considerable depth of water, even at low tide. Walking to the southern end of the breakwater gives you the opportunity to put your bait in even deeper water – the opportunities really are endless.

So how do I get one of these permits I hear you say? Understandably, in order to limit the number of anglers fishing within the marina, the number of permits issued is strictly controlled and whilst anyone can ask for their details to be added to the waiting list, expect to be waiting a number of years. I think I was waiting eight years before I got lucky, it is very much a case of dead-mans shoes. There is an annual fee to pay once you get to the top of the list but in view of the fact that more and more angling marks are being lost, it’s a small price to pay for fishing at such a unique location and I have to say, I do feel privileged.

With fishing in the marina only permitted during daytime hours, my 7am arrival gave me time to get set-up and fishing prior to the most productive time which is usually from low water to three hours up. One of the real benefits of having a permit for the marina is that you aren’t competing with other anglers for the best spot and more often than not it’s only ever been myself or one other angler fishing there. This was the case again today and I had the pick of spots to fish.

As there is around ninety to a hundred feet of water literally beneath the rod tip, distance casting is not necessary. More often than not a lob of thirty or forty yards is ample, just to get your bait out away from the chains which moor the concrete pontoon in place and find a good run of tide. Most of my fishing within the marina is done using the same rig and that’s a pennel pulley rig with different sizes of Varivas Big Mouth Xtra hooks, depending on the intended quarry. As today’s main target would be a whiting along with the chance of a thornie, a 3/0 BMX was used on the lower hook with a 2/0 Chinu hook above it to hold the bait securely in place.

Although the ground you are fishing on is relatively clear with mud and sand patches, there is always the chance of finding the odd snag, particularly when the tide is running, therefore I always incorporate a rotten bottom set up in to the rig. In a couple years of fishing the marina I’ve probably lost no more than two or three leads, but it is worth doing, just in case. It’s also worth noting that the rigs I use are built strong (100lb rig bodies and 80lb trace) as you never know what might take your bait fishing in such depths.

When fishing for whiting you can’t really beat good old frozen mackerel although the addition of some frozen black lug bound to it can sometimes make the difference in picking out the bigger fish. Generally, the whiting in the Tamar are of a good size, with decent numbers of fish up to 1lb 8oz being relatively commonplace most years and the ultimate prize being an example over the 2lb barrier. With this being the case I always use relatively large baits in order to deter some of the smaller fish which can sometimes move in over the slack water period.

With a decent size mackerel bait lobbed out in to the depths and the tip of my T900 registering little or no tide run as yet, the second rod would be fishing frozen prawn. Frozen prawn is one of the best year-round baits to use in the Tamar and will often out-fish everything else, including crab. There isn’t anything that won’t take frozen prawn and that even includes good size eels and cod as well as pouting and bass. However, they are particularly deadly for thornbacks, so two good-sized prawns were loaded onto the second rig and lobbed out.

For the first hour or so the mackerel bait was getting hammered by numbers of smaller whiting which can often become a bit of a pest when there is little tide run. Using a pennel rig, catches of two fish at a time were pretty much constant, with those fish that had swallowed the hook being dispatched for the table. By the way, if you haven’t tried fresh whiting from the sea then you’re missing a real treat – it’s superb and luckily my neighbours think the same.

By now, the fog had started to burn off and it was becoming a beautiful winter’s morning. This coincided with the first run of tide and as predicted, activity from the smaller whiting seemed to drop off, giving the bigger fish a look in. A good slack line bite registered on the tip and straight away I knew this one was a better fish as it nodded all the way in. At 1lb 10oz it wasn’t the 2lb monster I was after, but it was a major improvement on the smaller fish that had destroyed the baits over low water.

Whilst the whiting fishing had been pretty steady throughout and fish were still showing with the tide now in full-bore, the same could not be said for the thornies. I always expect to catch one or two thornbacks when fishing the marina but half tide up I was still blanking on them. However, with the tide just starting to slow down as it got closer to high water, the tip on my right-hand rod slowly pulled over and then straightened before the line fell slack.

Picking up the rod it was clear this was a ray settling on the bait and after another couple of knocks I lifted into it and the tip bent over signalling something slightly meatier than a whiting. After a few minutes a beautifully marked male thornback spiralled up through the depths and broke the surface of the calm water. It was quickly unhooked, pictured and released back into the Norwegian-like water.

The tide had now virtually all but died away and I was thinking of packing up the whiting rod when I saw the tip pull down steadily, offering the tell-tale signs of another ray. Picking up the rod I slowly wound into the fish and initially struggled to get it up off the bottom. Once I started gaining ground it gradually started to come, but with the rod locked right over I was starting to wonder what I had hooked, as whatever it was felt particularly heavy. After three or four minutes of grunting and winding I managed to get the fish to the surface and rather than being the massive double figure thornie that I had been fighting in my imagination for the last few minutes, it was a more modest fish of around 7-8lb that had become tail-wrapped. To say I was gutted would be an under-statement!

This ray was soon unhooked and although I was initially disappointed that it wasn’t a huge fish, it did make me smile as I watched it vanish back in to the darkness beneath my feet. With the tide having all but disappeared and bites drying up, I decided to call it a day. I was pleased that both target fish had been achieved and that my choice of venue and the deeper water found there undoubtedly produced more bites than the shallower bays nearby probably would have done.

Having a permit to fish the marina does give you so many options. In the summer the mullet fishing is particularly good, with mates of mine having landed fish to well over 5lb and spotting some absolute monsters lurking under those pontoons where fishing is restricted (isn’t that always the case?).

Last year I also managed a few different species from the marina, including red mullet and I’m sure the deep water would also produce triggerfish and black bream at the right time. In addition, there also seems to be a group of resident spotted rays which have grown in number having been put back alive by boat anglers bringing them back in for weighing on land. It does go to show that by keeping retained fish in good condition, they will happily go back and can go on to thrive if conditions are right. I’m really looking forward to putting in more hours this year and seeing what else comes along, after all, isn’t that the very reason why we all go fishing?