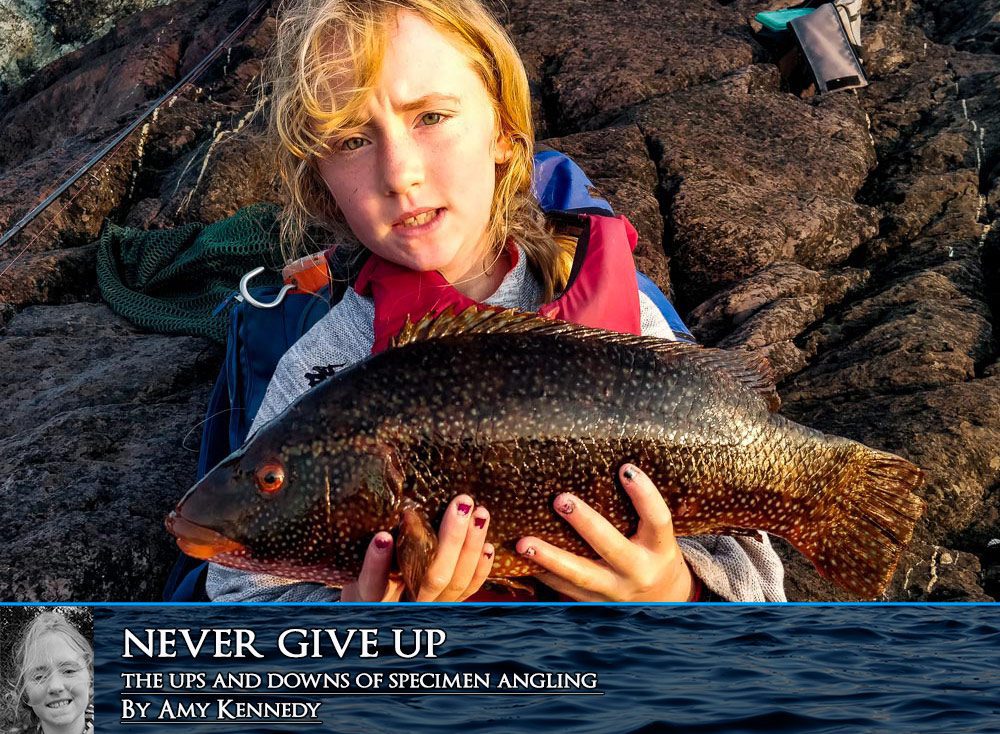 Welcome back to my latest fishing adventure.

By now you can guess I love hunting for the larger sizes of any fish species. This time we planned to go for a blue Shark with my dad’s friend Terry. The weather forecast was saying light easterly and a half a meter swell. My dad told me over the past few years if there’s any East in the wind it can be lumpy after South and East coasts of Ireland. The wind was light so we decided to go for it but knowing my dad he always has a backup plan if the forecasters got it wrong again.

With the boat launched we headed to the middle of Cork harbour looking for some fresh mackerel. It took a while to get us a dozen or so due to mackerel stocks being very low in the area. With the bait sorted we headed out to the shark grounds but as we got into the open sea the light easterly forecast was totally wrong and the wind was about 15 to 20 kilometres per hour. The swells were between 1.5 meters and 2 meters… My dad shook his head and said never again going sharking in an easterly. We turned the boat around and headed for an inshore reef out of the wind where we might get some conger eels and bull huss.

We put the anchor out and dropped down the mackerel flappers hoping for some action. Terry and my dad put down some scratching rods that had smaller hooks tipped with bits of mackerel. We only had a few hours window before we had to decide whether to stay or look for another species to target but as we sat back chatting making plans my conger rod got a bang. When I lifted into it, I thought it was a bull huss but when the fish came to surface it was only a small conger. As I put it back, after a few photos, Terry landed his first ever trigger fish on the small baits and after a few minutes my dad got one too.

I was really looking forward to catching my first trigger, but sadly after that it went dead! We decided to head in and assess our options of what fish we might be able to target. Once the boat was back in the driveway and the Jeep unpacked, we came up with a game plan. First, we were going to try for mullet. This was going to be a challenge as the mullet stocks are at an all-time low owing to commercial pressure. If that didn’t work out, we were going to try for ballan wrasse. They are also under pressure from commercial fishing to be used in fish farms!

Once packed, we headed for Roscarbery, a well-known Mullet venue in West cork. As usual, we scanned the water on arrival for fish, but sadly there were only a few mullet showing. Like every session we got our baits out hoping for a larger fish but as the hours passed it wasn’t looking like we were going to get any until I got a rod bending run with the fish leaping clear of the water and doing everything it could to get off! All I could do was keep the rod high and apply steady pressure to leave the fish working against the drag. It gave a great fight and once landed we took a quick few photographs and released it to fight another day. Result!

So, with plan two yielding only the one fish, we had our fingers crossed that the ballan wrasse would play ball. To get the bait we went off picking some crabs and digging ragworm. It took over an hour to get the crab and about the same to dig the ragworm. With that, we were back to the Jeep and started our 166-kilometer drive to Slea head in county Kerry. Once we had the long journey to this spot over it was time for some food and to set up our gear and tent before it got dark. We got a good night’s sleep and we were up and walking to our fishing spot by 7:00 AM. The daylight was increasing and we were on the first mark, it looked like a really good wrasse spot with deep water and underwater ledges for them to hide in and hunt around. I was really excited to get a float and bait in the water. Float fishing for wrasse is the most exciting way to target them, I think.

We all had our baits in the water and had cast to where we were hoping the fish would be. It didn’t take long before we were all into fish. I must admit it is cool looking at the float getting pulled down through the crystal clear water and, when you set the hook, the wrasse seems to be able to quadruple their weight for the first few seconds of the fight.

We all landed some beautiful looking ballans and I was delighted to have my first specimen ballan wrasse of the year. As we hopped among the rocks, we were landing some real cracking wrasse. There were a few areas I wasn’t allowed to fish as it was a bit steep for me so I just sat back and enjoyed the sun. Thankfully, the next area I was able to fish a nice flat rock that had some lovely turbulent water in front of it. As I didn’t fish the last two spots the lads sat back and gave me the first go of the water.

I cast out to the turbulent area and my float disappeared from sight. When I lifted the rod to set the hook the wrasse tried to lift me off my feet and started pulling me towards the ledge! I had to sit back as my dad grabbed my lifejacket to hold on to me. I always wear a lifejacket when fishing these areas and you should too. I had to put a lot of pressure on the fish to stop it getting into the kelp and when it got to the surface it dove down again. Once I had it back to the surface and into the net Terry put out the measure mat and we got the weighing scale zeroed.

The fish measured 52 centimetres and we knew it was a big one. Now it was time to weigh it and when the needle hit 6lb 2oz I was over the moon! Once that cracking fish was put back, we gave it another hour and got some awesome fish. We had 20 or more hard fighting fish and a few more length-based specimens. Sadly the wind turned westerly, making it near impossible to fish the next planned mark, so we decided to call it a day and head for home.

It certainly wasn’t how we had planned the weekend to go but it shows the importance of having a backup plan and being willing to change plans on the fly.