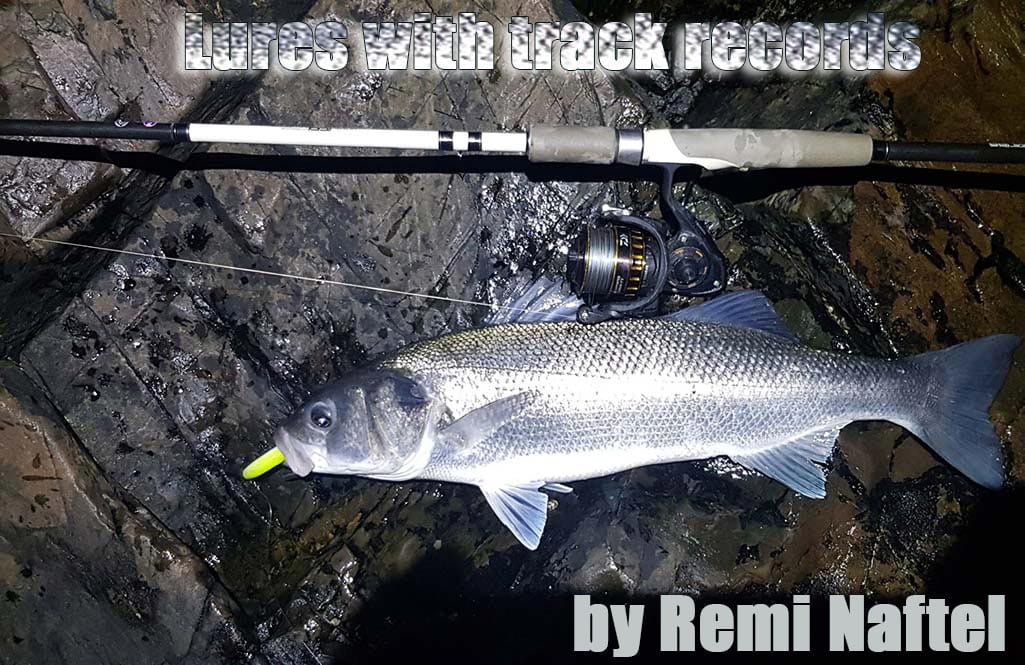 It’s common knowledge amongst anyone who knows me that my regular go to lures, especially when night fishing for bass, are the Sidewinder skerries eels. It’s almost been assumed in some parts that this is all I use, and whilst they are certainly a staple of my lure box for night fishing, I thought I’d give a bit of insight to a couple of other lures that I’ve found deadly in the right circumstances over the past few years.

The first of these lures is the Gary Yamamoto swim senko.

This is one type of lure I specifically like to use at night, which has given me great success. It’s built up a series of catches that only makes a lure better to the angler over time as it breeds confidence, and often it can be the confidence that is more important than the lure.

The swim senko is based on the original senko with the addition of a paddle tail, but the paddle tail really benefits the lure for night fishing. The lure is basically a supple ribbed tube leading to a flat tail section before the actual paddle tail. This version is 5.5″ long weighing in at 14g. Colours I like to use and which have worked for me include cream white, white/chartreuse and green. I’ve no doubt other colour options would work, but I’ve certainly no reason to switch about. 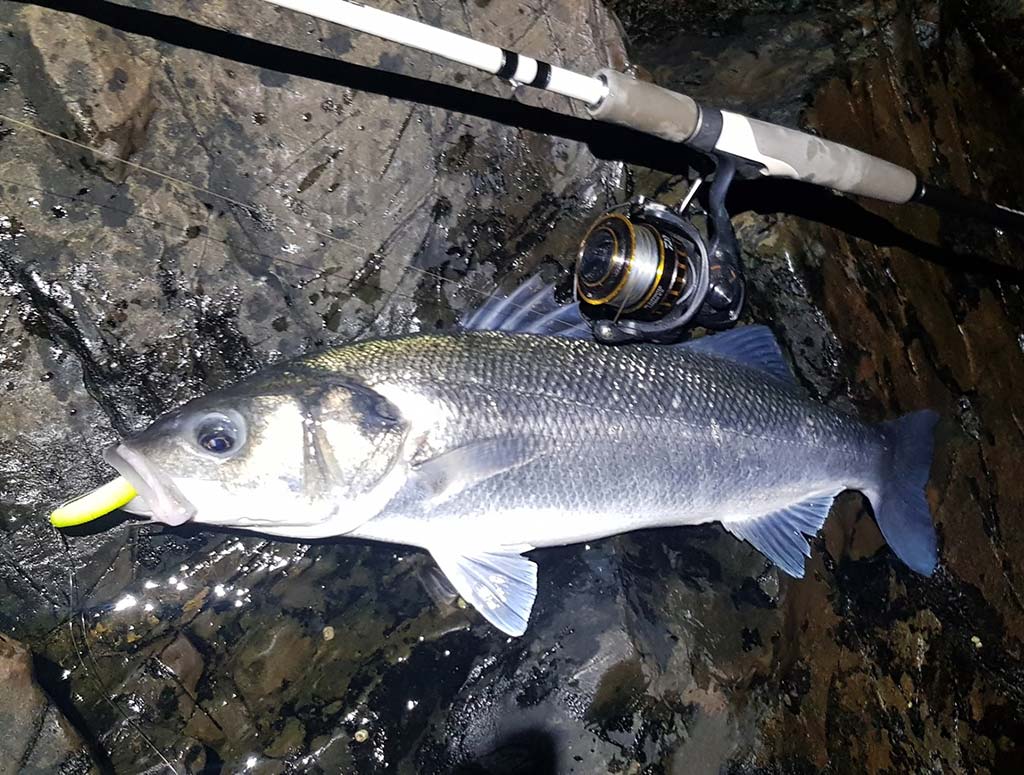 When made, they are salt impregnated, which adds weight to the lure. The reason for this is twofold. First of all, it aids the casting distance as all weightier lures do (it does cast miles).  The other factor is it helps the lure to sink, as without this added weight the lure material is quite buoyant.

There are various ways you can fish this lure, whether it be Texas style rigged, on a weighted jig head, with a weighted weedless hook or simply just a weedless hook. The weighted options will clearly allow further distance and deeper water to be fished, whilst the lighter ways of rigging it up allow for a slower retrieve, perhaps over shallower weedy/rocky ground this comes into its own.

I like to use the Berkley Fusion 5/0 hitchhiker hooks. The hitchhiker is a cork screw stainless coil attached to the hook eye. These are very important on soft lures this style. It holds in the lure very well which stops it being ripped off the hook when a fish is caught or an aggressive bite has happened, which would otherwise get quite costly in lures.

Conditions I tend to use this lure in are very shallow water, say a maximum of 8 feet.  I am happy to use it over a mix of ground including sandy beaches, heavy rock/weed and even in big waves from the beach. You don’t need much speed to get the tail moving, in fact a turn of the handle every second is fine. As I tend to only be using an un-weighted weedless hook, if you really crank it in it’ll end up on the surface skipping along the top! As with all my lure fishing I pause every now and then incase a fish is chasing and not committing to a take. This normally results in the take, whilst also giving the lure another method of fishing where it’s dropping down mimicking an injured fish.

In the surf I fish it a little different. The best way I’ve found is to let it sink and move around in the waves, retrieving every now and then. Still to this day I cannot understand how a bass can find lures like this at night among the waves! There must be so much vibration and commotion from everything else, yet the manage to home in on a fake fish!

Conditions do have an impact on this lure. Even though it works well being dropped in heavy waves and thrown about, it doesn’t seem to fish as well in high winds. It tends to be lifted up on the surface and swim side ways not giving it the action it deserves. Of course this may be different if fished with a weighted jig or hook, but it is not my preferred method to work the lure with the right action.

The second lure I was to discuss in this piece is the Nomura Konan.

This is another lure I have turned to in different circumstances where the fish wouldn’t play ball. It wasn’t till a still summer’s night I realised how to really put these lures to good use. The night in question was my ideal night with no wind and a full moon. It was the first time I’ve fished this mark so didn’t really know what to expect. As with every new mark I try to figure out where to land fish safely, the best place to stand and try to figure out where rock heads are to appear just under the surface, which isn’t easy at night! Whilst I was sitting down thinking of what lure to use I could here some very loud splashing on the surface in front of me. Panic and adrenaline set in and I’m frantically going through my box trying to find the first lure that comes to hand.

I pick out a Nomura Konan in real tuna colour. This particular lure is 11cm and 19g. I wait to here the splashing and cast as quick as I can reeling in at a slow speed as I normally do, unfortunately I did this a few times without hooking up!

Getting quite angry with myself I couldn’t understand why I wasn’t catching the fish as this is what I normally do with the Konan. I took a minute and tried to think what I could be doing wrong. I put my torch on the water and could see dozens of smelt on the surface. Watching them for a while it seemed the bass were feeding on them and the lure is more or less the same size, so what else could it be? Then it came to me, the smelt hardly move in the water, they only seem to move to face the same way in the very slight tide.

Ok, I thought this is going to be silly but I’d have to try to copy them! I cast out and left the lure stationary for 30 seconds or so, then gave a little flick of the rod tip and left it again, but nothing. The next flick an almighty splash on the surface happened, then the rod started arching over! This was it, I nailed it and after a lovely battle I landed what was at the time my personal best shore caught bass of 8lb 9oz, and on a wholly new and seemingly unnatural method. I couldn’t believe what just happened, so after a quick photo and a release of the fish, which I always put back, I tried again. Bang! A bass of 6lb 12oz fell to the same method! Over the next half hour I had left due to the tide ebbing I had 3 more fish all over 6lb. Moral of this story is mimic the bait, even if that is very limited action.

I hope this helps others choose a few more lures that may work for them in circumstances where there usual lures aren’t performing. These are two staple lures that are now always in my night lure fishing bag 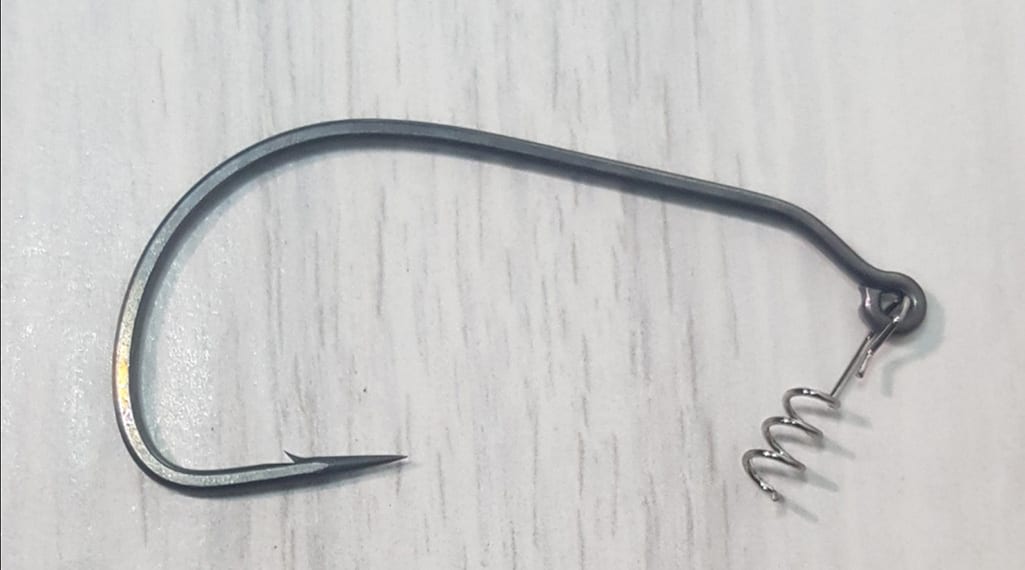