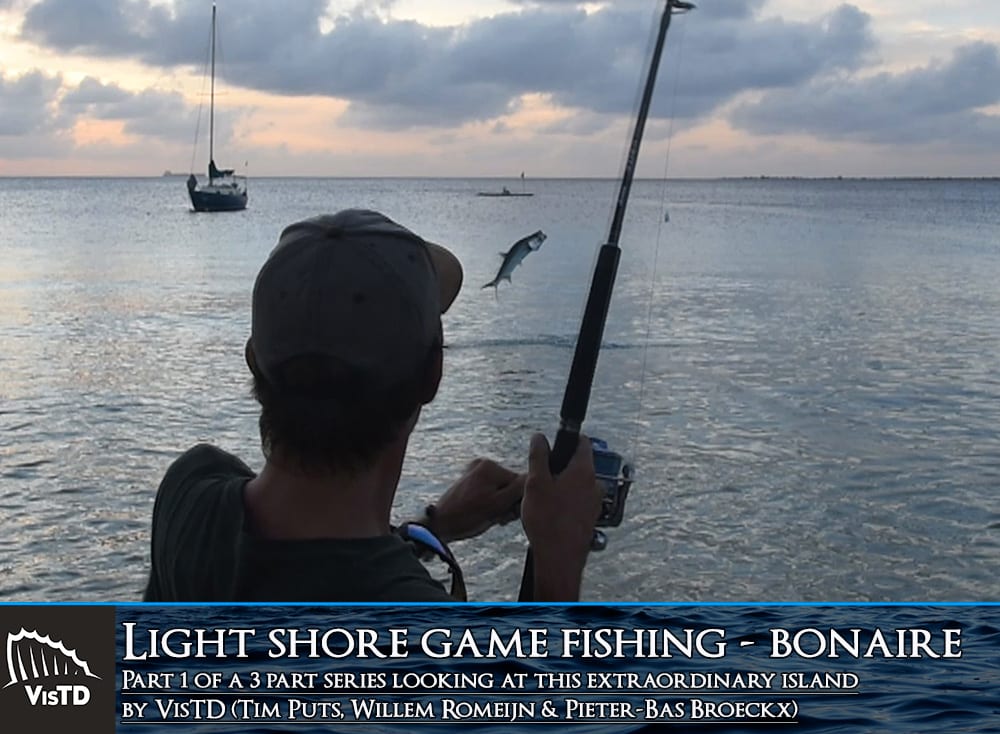 Approximately 7,800 km from Amsterdam, in the middle of the Caribbean Sea off the Venezuelan coast, lies a special little place belonging to the kingdom of The Netherlands: Bonaire. A small island surrounded by shallow salt flats, extraordinary coral reefs and deep water. It’s not surprisingly a top fishing destination! We visited the island and our friend Peter at ‘Fishing Adventures Bonaire’ twice in recent years to discover the fishing in all its glory.

We experienced some truly spectacular angling, both from shore and boat. In three parts over coming months in Hookpoint Fishing Magazine, we will describe our experiences, tactics and materials used. We’ll kick off the proceedings by describing the type of fishing that anyone can do on Bonaire: fishing from the shore!

Bonaire is an old island, that formed approximately 60 to 70 million years ago due to volcanic activity. The highest points of the volcanoes reached just above the surface of the ocean and from that moment onwards, the waters around the island have been suitable for the development of coral. Nowadays, these coral reefs form the majority of the island.

They cover large parts of the shallow coastal zone and are of extraordinary, untouched quality. The reefs stretch out several hundred meters from the shore, after which the sea floor plummets to many hundreds of meters depth in a short distance. The sea floor varies both in depth and structure: there are barren ‘plains’, but also submerged mountains, deep reefs and steep drop offs.

When we arrived on the island, the thing that surprised us most was the muggy humidity and heat that we three Dutch lads encountered. We are really not used to heat of that kind. We were just lucky enough to catch the last glowing beams of the setting sun as we left the plane, it had been a long-anticipated moment. Outside the airport, our buddy Peter Tuinman from www.FishingAdventuresBonaire.com welcomed us.

Peter lives on the Island, working as a professional fishing guide and knows it like the back of his hand. He’s incredibly passionate about the way of life on the island, the surroundings and of course the fishing, he’s a fantastic guide and made us most welcome. The combination of deep water and shallow coral reefs within short distance from each other makes the fishery extremely diverse. For young and old, both expert or beginner: there is a lot to discover……and we couldn’t wait to get cracking!

The first and also easiest type of fishing we had a go at was shore game fishing. In other words: casting lures around the reefs and shoreline with fairly light tackle. Anyone can have a go at this type of fishing and it can be incredibly exciting.

There are many different species to target in the shallow coastal waters of Bonaire so you never quite know what you will catch next.  The whole shore line of the island holds fish, from the boulevard of Kralendijk up to the extreme and rough coastal zone on the east side of the island. We fished them all. There is literally mile upon mile of fantastic looking shoreline to target, it never grows old!

The west coast – fun for everybody

The prevailing wind on Bonaire is a 4 – 6 bft East wind. This means the West coast of the island is protected, offering more sheltered fishing spots that also happen to be easily accessible. They mostly consist of sand broken up by chunks of coral and rocks. We started our fishing efforts on this side in our bid to become acquainted with the species and techniques. The first session resulted in several barracuda’s, coney’s (a small type of grouper), trigger fish, bar jacks and yellow jack.

The jacks proved to be an amazing sport fish on our light gear. The don’t grow to extreme sizes (50cm max) but they fight for all their worth. You can catch them everywhere, from the rough surf where you can see them chasing your lures to the calm and docile waters near the boulevard of Kralendijk surrounded by cruise ships and all manner of craft. They do not disappoint!

Around the whole island, there are also schools of Tarpon to be found and they grow to some very impressive sizes. However, they are not easy to catch as we discovered. On the west side of the island, the Tarpon are preoccupied on fish scraps that they are fed by tourists in the restaurants and fishermen. So intense is their preoccupation that they completely ignore artificial baits. Peter showed us a spot where the Tarpon often forage for scraps which gave us a chance to hook several with chunks of fish bait on circle hooks. ‘Hook’ being the operative word, because catching them was a different game altogether. In total, we were able to hook five Tarpon, none of which we managed to get in front of our cameras sadly. The first fish we hooked stayed on for about 30 seconds, going airborne several times but our other attempts were even less successful. It’s incredible how difficult it is to get a good hook set, but we all got to experience the explosive strength of these impressive fish which in itself was quite something.

There is one species that really stole our hearts during our light tackle shore fishing: the Schoolmaster Snapper. We caught several of these extremely hard fighting fish on the West coast. They live in the rougher shallow reefs and fight like crazy. Pound for pound one of the strongest inhabitants by a country mile.  Fish up to 45cm easily took several meters of line from our tight drags, diving nose first into the reef. Bent rods, bent out hooks and a lot of fun. They are truly beautiful as well, exhibiting some serious colour! A bronze back with white stripes, beautiful yellow fins and an impressive set of teeth. We loved them!

The East coast of the island is extremely rough, due to the stiff East winds from the open sea. Under normal circumstances, the swell is huge with waves crashing heavily onto the rocky shoreline. The power of these waves over the years has eroded large parts of the coast resulting in a labyrinth of gulleys, rocky points and underwater caves. The rocks are razor sharp and the shallow rock pools littered with spikey sea urchins. This coastline is largely inaccessible for most parts of the year. It is simply too dangerous. We jokingly called it Mordor, after the volcanic ‘Dark Land’ in Lord of the Rings. It was a truly inhospitable yet epic place!!

But we got lucky. During a period of three days over our trip, the wind totally died out and the huge swell disappeared. With care and attention, we were able to fish the reefs and ledges from the water line. But to be honest, even without wind and relatively small waves, it was still tricky, hostile and uncomfortable. You have to have such good balance and a confident step as there is little room for error.  We had a few issues. Despite wearing chunky wading boots, we all felt the pain of a sting from the sea urchins. It’s definitely not a fishing spot to try on your own or take a novice angler.

The advantage of the East side of Bonaire, is the low fishing pressure. The fish are plentiful and they are bigger. We hooked a few true monsters! Pieter-Bas hooked up on a nice bar jack on one occasion and a few seconds into the fight a big shadow appeared behind it and sliced it in two with one bite. He immediately cast the head end of the jack back at the fish and it was grabbed getting hooked on one of the trebles of the lure.

An epic fight followed. The hooked fish built up enormous speed, swimming parallel to the shore, snagging the line under several rocks in the process. Amazingly, this pinged free and the fish tore off for the open ocean making several big leaps. It was a huge barracuda pushing the 2 metre mark, a true leviathan with teeth like knives. Finally, the fish came close to the rocks and Peter tried to land it but sadly, at this moment the small treble hook parted and the big barracuda sank slowly out of sight, never to be seen again. It was an amazing experience!

During our second trip to the East coast Willem got himself into a serious situation with a big fish. We were all busy fishing when he started screaming  ‘Shark! Shark! Shark!’.  We rushed over, well as much as you can on razor sharp rocks and urchins, all the while the curve in his rod getting ever deeper. He was hooked up to 3 metre lemon shark, that grabbed a bar jack he had hooked on a lure. The fight lasted only 30 seconds before the braid caught on a rock and it was game over. Done again!

We saved the best until the last day of the calm (ish) conditions. Tim and Peter found a large plateau just above the waters edge with some serious waves crashing all around, it was a pretty hairy spot.  Peter chose to sneak down and fish it while Tim looked on with his gopro in hand, filming the action. Not more than a few casts in and something big smashed Peters lure. A Tarpon and a nice one too, looking to be well over a metre in length. It took all of Peters strength and experience to beat this fish, keep the line off the sharp rocks and prevent himself from being pulled in. Landing the fish proved to be the most difficult part but one huge wave eventually solved that problem by depositing the fish up on the rocks and we got a good look at it. What impressive creatures those Tarpon are and a fitting end to our fishing on the East side.

During shore game fishing, you can expect fish of all sizes. Still, it is not necessary to use anything too heavy in our opinion. A medium heavy rod and a 2500 – 4000 sized reel is enough to have a lot of fun on the calmer and tranquil West side of the island. On rougher spots, with bigger fish, a heavy rod (50-100gr casting weight) and a solid 4000 – 5000 sized reel is perfect.

We used braided line with 30 pound test and a fluorocarbon leader with a minimum of 50/00 mm.

We used slim and shallow diving hard lures (8-15cm), top-waters (poppers, stickbaits) and small casting jigs (20-40 gram). Make sure to use solid hooks and split rings. Avoid clips. We found these got smashed and shattered. We tied our lure directly to our leader using a split-ring.

And a last tip: use wading boots with a thick sole! The rocks are razor sharp and the spines of sea urchins even more so. A waterproof back pack is also noteworthy. More than once we had waves crashing over us!

We are passionate photographers and film makers. Not surprisingly, we made several Youtube films about our trips to Bonaire. Also, about our shore game adventures. Check out our movie, with unique footage of Pieter-Bas and the big barracuda, Willem with his big shark and Peter’s epic fight with the tarpon. Enjoy!