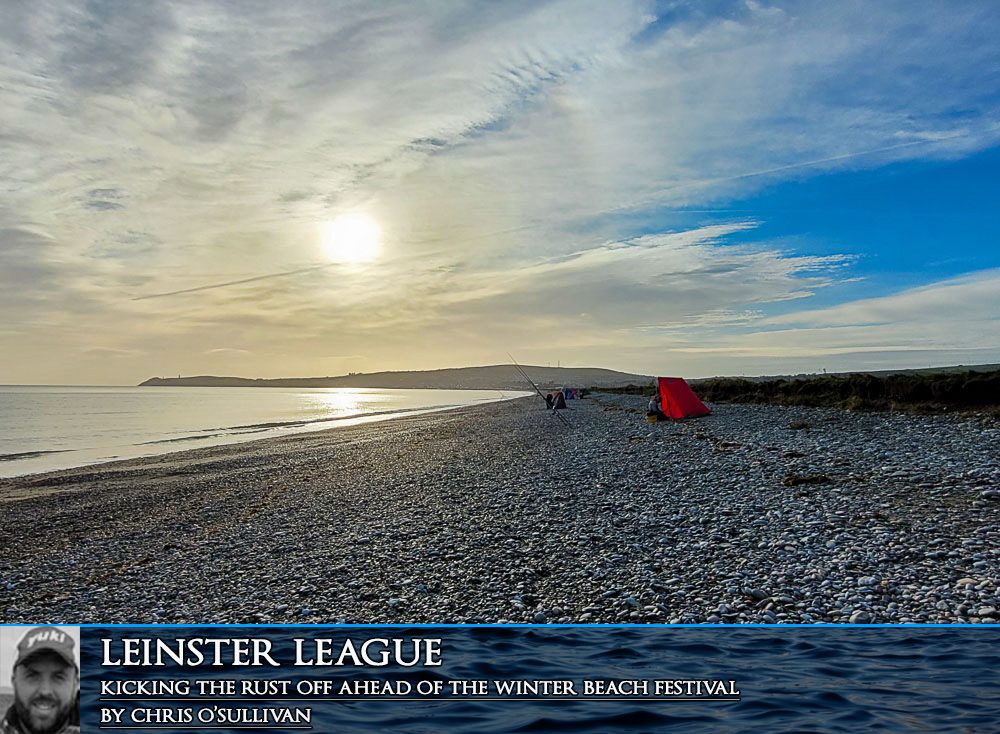 Picture this. It’s the 28th or 29th of December, you’re not really too sure what day it is after spending a week eating and drinking the contents of the local Tescos. Then, while eating your 40th Turkey and stuffing dinner, you start scrolling through Facebook. There is the usual few ‘look what Santa brought’ posts, the odd ‘new rod christened’ and some lovely cod pictures too. Eventually you start to see club fixtures appearing and thoughts like ‘oh that two-dayer looks good’ or ‘Chesil in October could be exceptional’ really start to get the buzz going. For me, it was the sight of the list for the EFSA Winter Beach Festival that really got me going. 100 names in and filling fast. A few phone calls later and there was an Air B&B organised and names entered into the competition. Just in time too, as it was capped at 120 with a standby list only left not long after my entry.

Anyone who fishes competitions in the UK and Ireland will have heard of the festival and it attracts the top talent. With that in mind it’s foolish to think that you can go and compete having not fished a serious match in a month. As soon as the entry was accepted I started to look for any open matches in the weeks before that would help knock some rust off. The first suitable one was the opening leg of the Leinster League, which is the Province on the East of Ireland for anyone wondering, so a four hour drive for me. Not ideal but the venue is one I have fished as part of the festival in years gone by and there would be a strong test against the local lads on home turf. Ideal.

I contacted Troy Francis and my brother David who would also be fishing the winter beach and they were equally as keen. Around 35 anglers were entered on the Tuesday before when I started to go through the rig box and think about bait. By Friday, it had snowballed to 80 entries. South Shore SAC were the host club and conducted the peg draw on Facebook live the night before. Thomas Keogh was in charge and it was done very efficiently (for anyone looking to do something similar they are a great template).

Peg 16 was to be my home for the 5 hour match and I immediately took some spare leads out of the box, knowing it would be a long walk. Pegged on my left was Des Farrelly who is the Irish captain for the world championships team next year and on my right Troy Francis. Yes, a four hour drive to fish next to my mate from home in a field of 80.

The targets for the day would predominantly be the huge shoals of whiting that inhabit the east coast. Along with these, some dabs would be on hand plus the odd bonus dogfish and thornback ray if you were lucky. The size limit is 18cm and you are allowed 5 undersized fish, which get 10 points each. Most anglers set up with fixed spools and continental rods while there was also a good scattering of 14ft more traditional rods and multipliers which are becoming less and less common on the Irish match scene.

As 11:30 approached, I must say I had  really begun to get into the mood. I set up my Yuki Neox Kenta 4.5m with mainline of just .23mm(and tapered leader), which I was very nervous about. Never before had I used the lighter line and continental rod on this venue, so I had a few extra casts to stretch the line and suss out the sea bed in front of me. Thankfully it seemed to be sand onto a mud bank, then on my last retrieve I seemed to grab some weed or possibly a snap off.

Naturally I wound in and began to retrieve the considerable length of snap off. I had heard that some guys were practicing the day before and as the line stretched right across Des on peg 15 I thought I’d do a good deed and retrieve it all, even though I would need every advantage to beat Des and a line snag would definitely slow him down. As this crossed my mind I heard a shout and realised promptly that I was actually pulling line via a few rocks from the rod Des had cast and put down momentarily! To say I was embarrassed is possibly the biggest understatement of this young year. Red faced I apologised and retreated to my beach buddy where I hid shamed until the beginning of the match.

From the off there were whiting of great numbers all along the match zone and after 75 minutes I had filled my quota of undersized and had 11 fish in total. 10 whiting and 1 dab. Small sandeel were taking the bigger fish, lug tipped with mackerel and frozen black lug were also catching, but mainly undersized on the fresh worm. I seemed to be doing well but with so many in the match stretch it was impossible to tell and the lack of Facebook updates combined with a right to left tide meant I was sure the higher pegs were catching.

Indeed, John Hughes was hauling from the off along with local top rod Paul Whelan. Troy’s father was up in the short walk pegs and Mick was motoring with the whiting. For about two hours the beach was alive with action but as the tide slowed the run of fish followed suit. I deduced that I was maybe top 5 at that point so would need to really crack on as the tide began to pick up again. Ladies International Pat Shortt was around 5 pegs below me and around 4 fish ahead, so I set the target of catching up to her and hopefully overtaking but, every time I looked she seemed to be returning fish. Then a plague of 17.5cm whiting seemed to descend on us. Troy was particularly unfortunate here, having multiple double shots fall short of the qualification size.

With an hour to go my club mate Fiachra replied to say he was doing well and the fish were coming on strong in his area. David Coleman and himself really started to get among the fish with the final whistle only stopping them from filling the cards. In the end I managed 22 fish for 466 points which I thought might leave me top 10 in the zone but, as the long walk went on, some guys I was sure had a pile of fish didn’t and optimism began to surface. Maybe top 5.

Given the current situation we find ourselves in there would be no prize giving after the match so we treated ourselves to the local chip shop and started into the long drive home. There must have been phone calls and texts flying all over because half the trip home was spent discussing the competition.

The anxious wait lasted until the Monday afternoon where I was delighted to see I had managed 3rd in the zone and had a share of the biggest round fish pool with a whiting of 27cm. Even better, Fiachra had managed 2nd in his zone and 3rd overall on his first visit to a match on the east coast. Overall winner John Hughes had an outstanding return of 31 fish for 698 pts. Paul Whelan was 2nd with 31 for 686 and Fiachra Cronin was 3rd with 28 fish for 611 pts. Longest flat fish was a dab of 33cm by Sean Ivory and longest round was shared between Paul Killen and myself with a whiting of 27cm. The full results are available on the South Shore Facebook page.

Massive kudos has to go to the Leinster league organising committee and South Shore SAC for a brilliantly run and expertly organised competition. As for the rust… running along the shingle type stones will knock that off, so confidence is high for the Winter Beach Festival. Now I just need to make some rigs. Any volunteers?