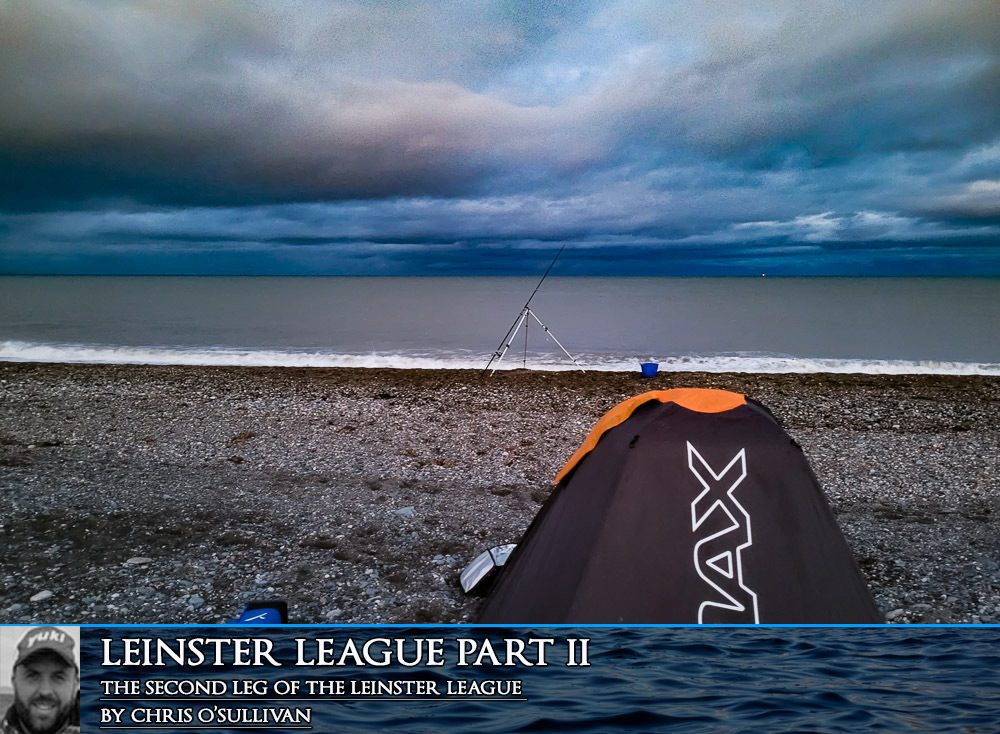 “How ya Chris?” Came the call. “Are you coming up to the second leg of the Leinster league? I have a few envelopes from the first leg for you and Figgs”. Sure, how could I say no now? You can’t say no to collecting an envelope.

I set about rounding up a few travelling companions but to no avail. Various reasons and excuses floated around so it was looking like a solo trip for me to take on the best of the east coast. Luckily, just as my determination was starting to wane, Finn Healy called and said he would travel too if there were room. The plan was back on and at 07:30 sharp we started the long trip to Kilcoole.

It should be noted that this may well be the first time that Finn has ever been on time. This is no exaggeration. As we crossed the country chasing the end of the night we came up with plan after plan. Some ridiculous and some not bad at all. Eventually we came to the conclusion that we would try to pick off the dabs and whiting at distance before the tide run picked up too bad and we were forced closer to the shore.

Upon arrival we paid in and collected our cards. The local lads were nearly all ready to go and this made me nervous. Another monster walk was in store. The common consensus was that the fishing would be slack unless you had drawn in the last 10 pegs. Just my luck to be 20 from the end but in the same zone as the hot pegs! 12 to 15 fish was the target for a zone win, so I set about my mega walk once again thinking all the leads would be better in the car rather than on my back. To add to my struggles I had to return the Yuki 911sf to its rightful owner and thinking he was on a low peg casually put it between my box and the rest. It stabbed me for 40 pegs!

Once I landed and was set up it seemed there was less tide run than expected, so I went for distance and was rewarded with a whiting to start the day. There seemed to be a few showing and again the simple baits seemed best suited to the day. Lug tipped with a tiny sliver of mackerel paid dividends and I made it to 4 in the first hour. Finn was down in zone A and by all accounts it was a desperately slack affair with only the odd fish showing.

After only picking up an undersize in the first hour I started to seriously wonder was it worth the 4hr trip. Then though, as the tide started to push and the small weed wreaked havoc on the shock leader knots, most of the lads dropped closer but with the same result. So I decided to try and stick it out and managed to pick up a double shot of dab, one being sizeable, which was incredibly welcome. The smaller of them went 18cm and the very welcome larger one a healthy 27cm on my bottom hook.

All of a sudden I was back in the hunt, so I kept at distance and even though the tide run forced me closer I continued to pick up the odd fish outside. Black lug tipped with mackerel were picking up the odd straggler and as I looked around me I seemed to be the only one catching. Word on the beach was very slack which had me confused. Usually no groups of anglers means the fishing is very good but this time weed was playing havoc with some pegs so there was no time for walking around.

After nearly 6 months away from match fishing I was delighted to be back in the thick of it and having spent a few days preparing I was glad of being able to pick out a range of rigs in the box. This came in handy as the weed started to really slow down the fishing and created numerous tangles. With time slipping by and word that I was doing well coming down the pegs I really started battling.

I could see that Killian Farrelly was getting a few fish and that if I could keep up with himself and Des I’d be in with a chance of maybe even getting a prize out of it. So I doubled down and came in to the gutter to take on the weed and hopefully a fish for the pools. I mentioned this to the angler alongside me and he just laughed. David Coleman from Swords angling had gotten a plaice of 35cm in the first few casts! Luckily for me, I managed to pick off a couple of in size whiting on sand eel in the gutter, bumping me up to 9 fish in a low scoring zone. As I packed away my gear I had a great big grin on me. Even though I knew I hadn’t won and was probably miles out of the prizes it was great to be back in a match with all the lads.

As for myself, the weed came in with a vengeance and what was worse is it wasn’t big huge kelp stalks but instead small tiny bits that accumulated on the line and was awful keen to break tip eyes once It found the leader knot. I counter acted this by using tapered line but, to be honest, it was a wasted venture. Nonetheless I was running around the beach like a headless chicken getting a few fish and my usual slew of undersized fish.

Now, during this time I had convinced myself that I was doing very well in the zone. Based on what, you might ask? Well, no actual facts other than I seemed to be weighing in more fish than anyone around me. Did I stop to consider the end pegs where the hotshots were? Absolutely not. So in blissful ignorance I fished like a mad man getting myself to 12 fish. The same number of fish that had won a night match the previous evening. I had around the same amount of undersized fish that didn’t count.

JJ Roche alongside me tipped away and pipped me on the last cast by only a few points. This was the first sign that maybe I hadn’t done as well as I thought. Then I met Ruairi Coleman who had 14 but, the final nail in my ambition was meeting Ciaran Fogarty in the carpark who had 19 fish but added ‘I was nowhere with that’. Oh well easy come easy go!

While waiting for Finn I packed away the gear and word filtered through that Alby Allen had produced a master class to bag 28 fish and the win too. Jim O’Brien had a dose of good karma after carrying a lost bait box from the carpark all the way to the end peg to reunite it with Gordy Hardman who must of gotten excited about the sweet peg draw and left without it. 25 fish for Jim in 2nd with John Birmingham 3rd, Martin Corr from Borough in 4th and Gordy taking 5th. The less said about my 16th the better. Zone A was a much tighter affair with honours going to Siert Schuls from Howth with 12 fish, Killian Farrelly took second with another fine performance followed by Thomas Keogh and Des Farrelly in 4th, with Finn Healy picking up the final envelope in 5th.

The juniors was another tightly fought affair with Daniel Gricius taking first spot with 7 fish, Evan Mason 2nd on 4, Max Roche 3rd and Aron Willet taking 4th. Anyone who knows anything about fishing can see plain as day that these young lads love their fishing and have plenty of talent to match. So remember their names because they will certainly be popping up a lot in the future.

Pools on the day went to David Coleman with his plaice of 35cm and tied 2nd in the flat pool was Niall Carabini/JJ Roche/John Birmingham with flounders of 29cm. Longest round went to Sean Carley with a coalie of 36cm and 2nd went to Paul Killen with a whiting of 30cm.

Once again, it was a great privilege to come up and fish with all the lads in such a well run league. So thanks to South Shore for having us. Next fixture is the 20th of March.