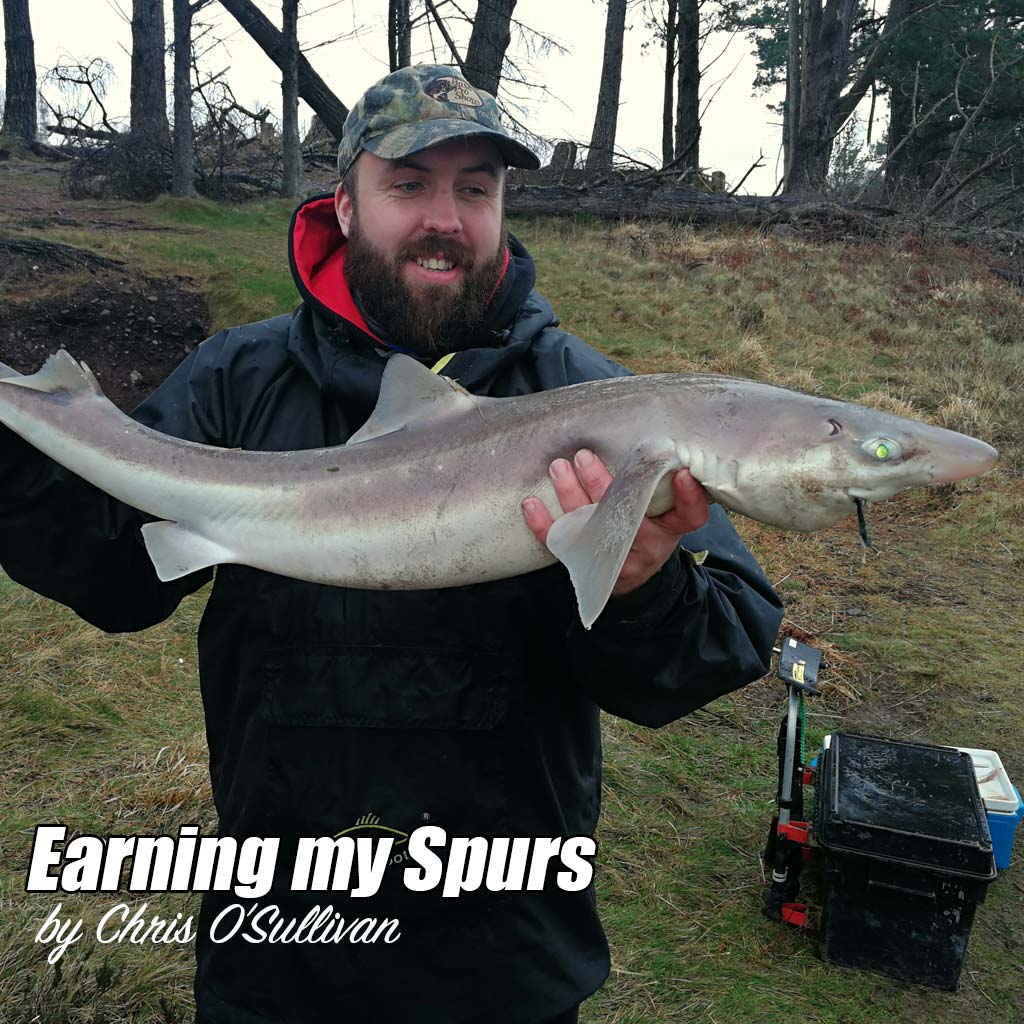 I remember it clearly… I’m 12 years of age and have been allowed to accompany my cousin Martin Conway on a shark fishing trip out of Fenit Harbour in Tralee County Kerry. We steam about 8 miles off Brandon head which seemed like it took an eternity to an excited kid. Patience has never been my strong point. I’m wildly excited as I’ve heard the stories of 300+ foot of water, next stop Nova Scotia and big big fish. The Blue Shark never played ball that day but stuck hard on the bottom were another type of Shark. The humble spurdog(Squalus Acanthias). In the 70s and 80s huge shoals roamed this area but like so many of the oceans species they were commercially netted to the brink of extinction. We managed a range of species that day from cod and ling to pollock, but the spurdog that day were something else. I remember clearly the fight they put up from bottom to top it was like nothing I’d ever felt. I asked if you could catch them from the shore to which the skipper replied ‘yes… if you can cast 2 miles’.

It’s been far too long since I’ve seen those bright Green eyes and razor sharp teeth in person but the time had come to address this. Usually I’d have no problem sharing my marks as I believe fishing is for everyone and when we lose an angler because he’s not catching even though we know he’s in the wrong area or fishing the wrong tide it’s not fair to let them go.

Unfortunately though this is not my mark so vaguely I will say the adventure took place in South Kerry. Three days of poor weather and some very unwelcome snow meant some serious flood and melt water entering the water close to our desired mark. Hopefully this would not put the fish off the feed.

Baits on the day would be simple large mackerel, sandeel or squid baits mounted on 3/0 hooks of your choice and a short biting piece of wire trace. The razor sharp teeth will make short work of mono and ends up with fish swallowing hooks that can be avoided. I like a one hook pulley rig in order to combat the steep ledges that are common in the area. This pulls the lead out of the danger of rocks/snags and means you can concentrate on getting the fish in quickly. Some anglers prefer a pennel set up but I personally don’t like using them. I opted for a 6oz grip lead for two reasons, firstly I was convinced with the depth of water that I would need the help holding bottom and secondly when the fish takes the bait and runs I believe the grip lead helps to set the hook.
I’d be joined on this adventure by my sister Alison and Cork man James Leahy. Alison is a match angler whereas James prefers to target the specimen fish from the shore and boat. All three us were taking part in the Shore&boat species hunt on Facebook so a spurdog would be a most welcome addition to any tally. 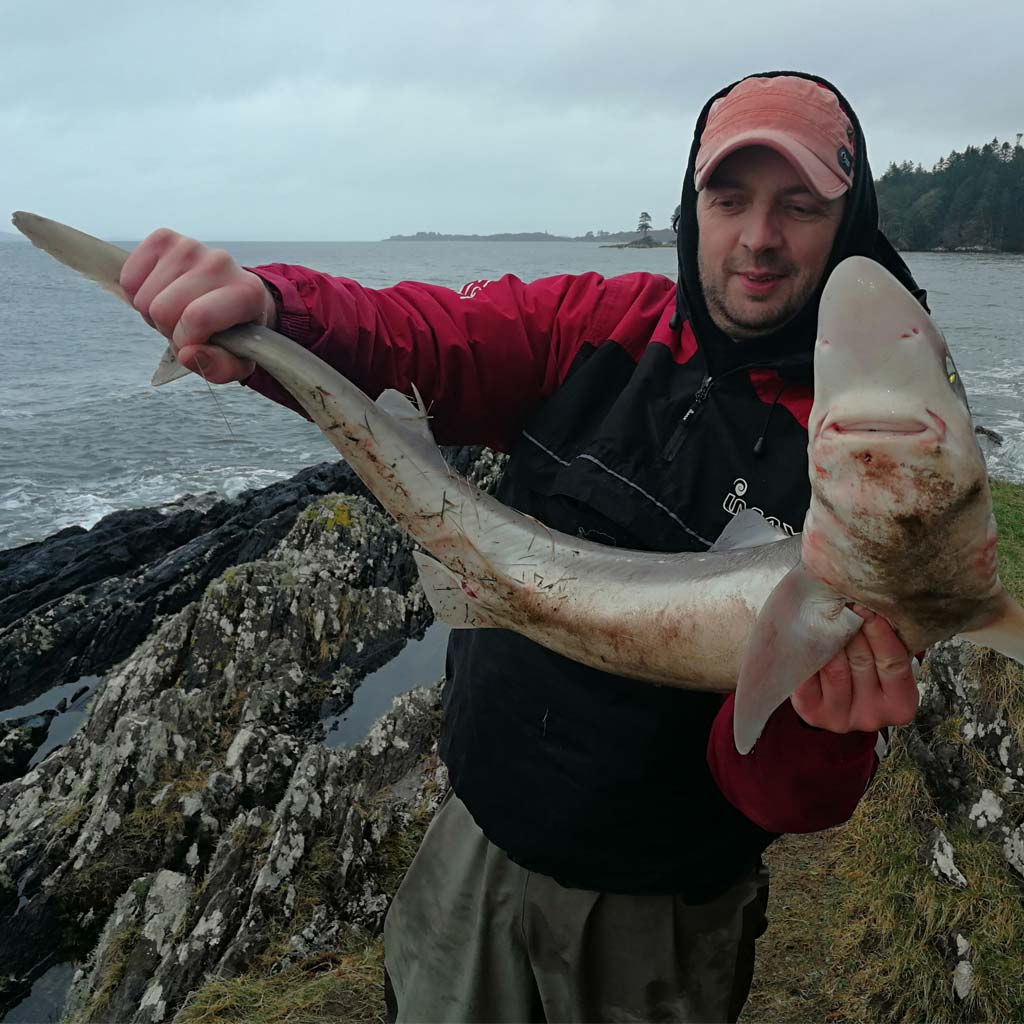 We watched the weather and tides and once we spotted the break it was full steam ahead. For once the start to the adventure was 10am and not the crack of dawn which was welcomed by all. Kids were dropped to school and cats fed and as we loaded the truck it was obvious the conditions were spot on and only improving with the forecast. Everyone was up for it and fishing chat made short work of the trip down.
When we arrived excitement peaked, the mark was empty and it was ideal. We set up rapidly even though the best of the fishing wouldn’t he for a few hours as the tide started to move. Mackerel and sandeel were the baits and various cocktails were sent out into the deep. As with all specimen hunting its a waiting game and patience is key, after only a few minutes I convinced myself some crab action was definitely a fish, it’s fair to say I was well up for the fishing. After being hammered by dogfish the previous trip I was nervous to see a tentative bite form on the Century Blackbird. I turned to complain when the drag cut me off mid sentence, I spun around to see the tip lurching seaward and line peeling off into the deep. I was keenly aware of the many obstacles between the fish and the shore so I reeled down and struck into the fish. There is no time for playing fish here and against all of my instincts I pumped and winded huffing and puffing until I saw the fish break the surface outside of the rock ledge. I guided it onto the rock pool using the surf and thankfully James was down in a flash to tail my very first spurdog.

It would be easy to say I was very grown up here but inside I was hopping around the rock mark and a big stupid smile betrayed me. As we slipped the fish back James’ rod was next to go and we could see it was a far better fish my one only being approximately 4lb. As I am recovering from an achilles operation James had graciously put himself on the hardest part of the mark to get around however he has been here and got the fish before and knew exactly what to do and as he guided the fish into the shore I was able to take the rod so he could tail the fish. A real beauty of a specimen length and approximately 13lb in weight. A few quick photos of the feisty fish and it was back in the water swimming off strong.
To be fair I’d of left now happy, daydreaming on the seat box I reminisced that this was my 3rd attempt at spurs and that some people would never get to see these amazing fish in person. Alison was the next to the party as her Afaw six and bait bounced into life. The pump and wind tactic couldn’t be further from the match fishing but that didn’t matter and within a few minutes another 4lb spur was on the bank. There was smiles all round at this point as the mission was accomplished. This is when things stepped up a gear. Every second cast produced a fish and James was busy up and down the rocks. At this point we were joined by Bill Brazier for a chat and he got straight to work landing fish. In between the 4lb fish my line went slack and we knew it was a better fish. 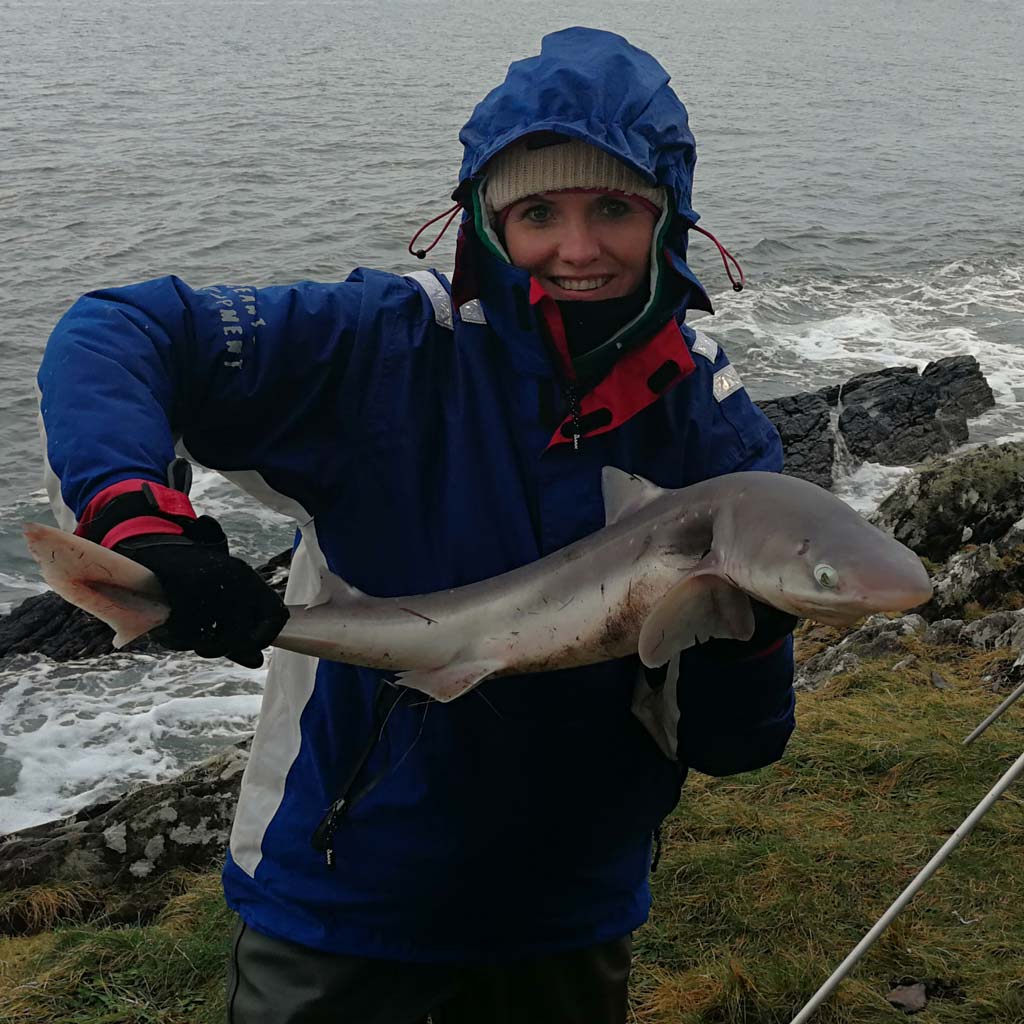 Some nose dives and a run along the bank had the blood flowing as James was in to a fish of his own, so Bill tailed the Spur and lifted him onto the bank. Excitement gripped us all as the measures were laid out . It went 111cm easily. It would of taken little effort to stretch the fish to 114 or 115cm but there was no need as it was already 6cm over the Irish specimen length with ease. The fish was estimated at approximately 14lb but could of been slightly heavier. It will take a long time to better that fish I think. Massive thanks to Bill for landing my specimen and James for tirelessly landing fish all day up and down the rocks. Bill is the editor of ‘Off the Scale’ here in Ireland it’s the only dedicated fishing magazine here in Ireland and well worth a look.

The long walk through the active forestry and the mud on the way back was tough going but the buzz of the fishing and the lashing rain that moved in motivated us to get back to the truck in double quick time. While we loaded the truck the rain started to come down in earnest and we were glad to be away from the mark. To say that coffee and muffins were deserved was an understatement. Fourteen fish in total landed with some questionable crimping by myself almost losing a 10lb fish. We managed two specimens on the day and plenty between 4lb and 7lb. I am certain we could of easily landed in excess of twenty fish had we decided to face the monsoon that had descended and stayed into darkness. For this elusive shore fish this counts as a red letter day that will live long in the memory. I can see why people abandon match fishing for the thrill of the specimen chase. I think I certainly have the bug. 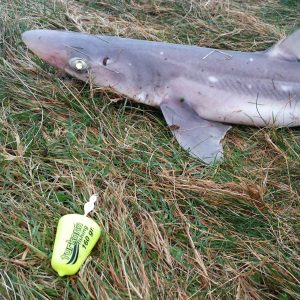 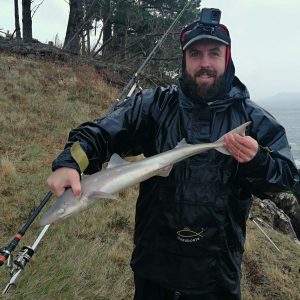 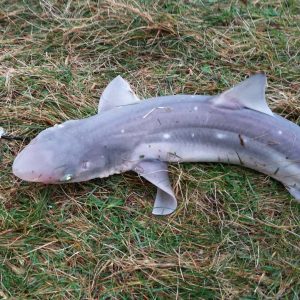 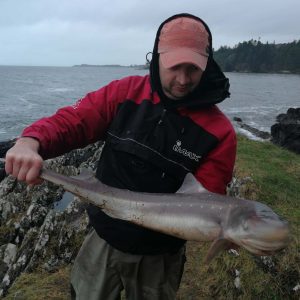 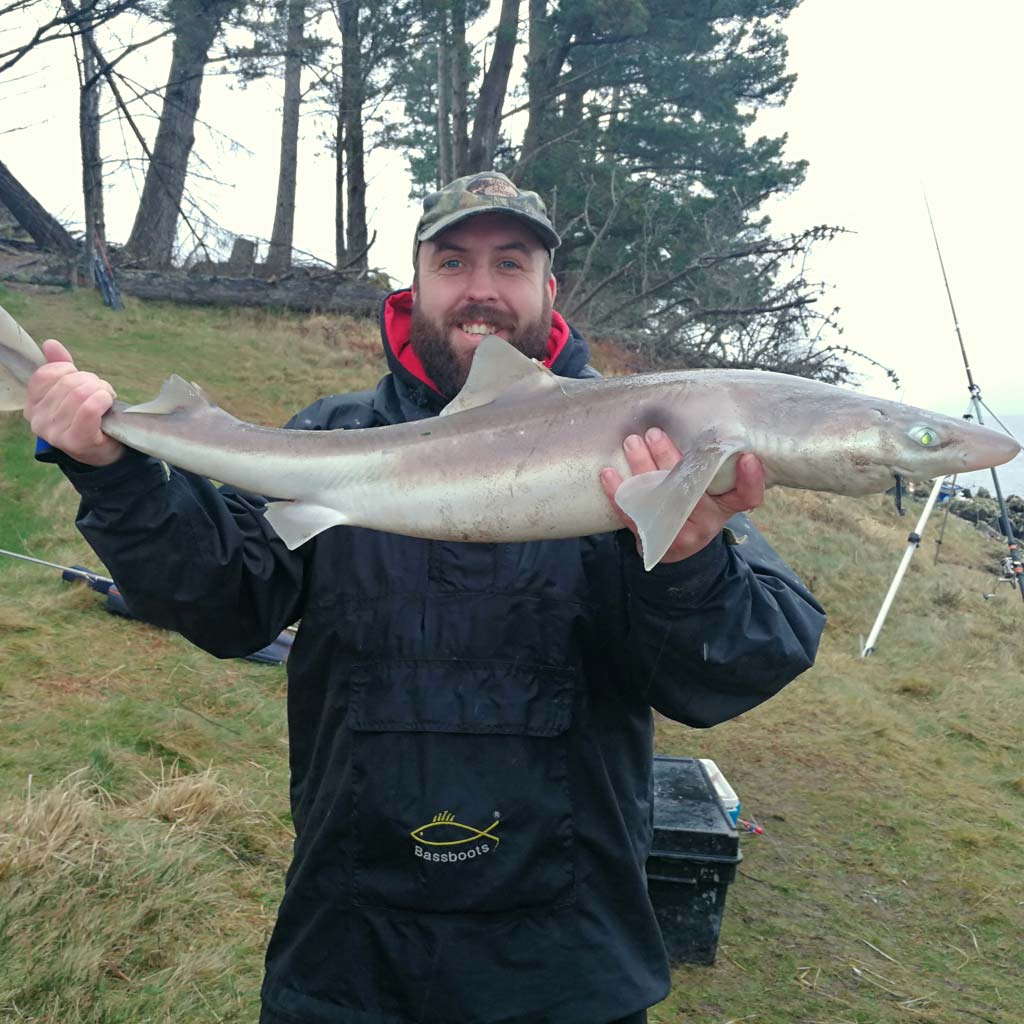