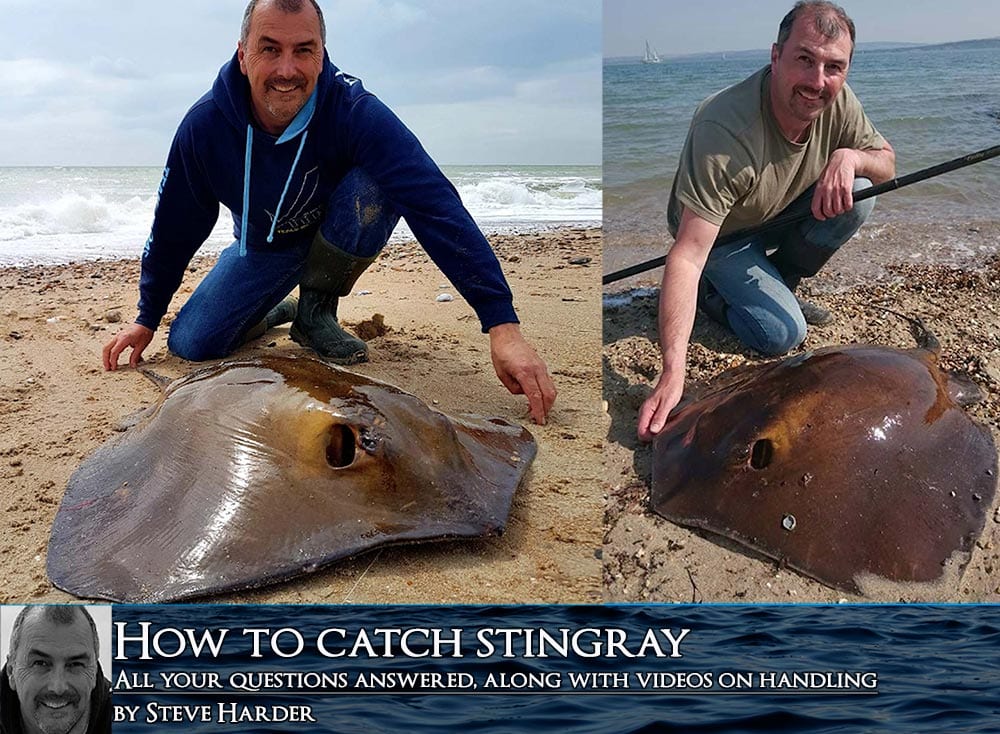 How to catch stingray

Following a few posts on our social media accounts lately, we’ve received a lot of queries around how to catch stingray in UK waters. Well who better to put these questions to than Steve Harder. Few, if any, have caught the number of specimen stingray Steve has accounted for.
So here’s Steve’s answers to all the questions you left for us on Facebook. You can use the comments feature if you want to know anything more.

I generally use a 3/0 for most of my stingray fishing because a stingray’s mouth is a lot smaller than other UK ray species of a comparable size. Even on a 60lb fish you wouldn’t be able to fit your hand inside it’s mouth (not that I’d recommend doing that anyway!) A strong pattern hook is essential, with my personal preference being the Varivas Big Mouth Extras. Nearly all of my big stingers have been caught using those hooks and I’ve never had a problem with them. I only ever use a single hook for stingray, as they’re usually quite confident feeders and tend to swallow the hook down a lot of the time. 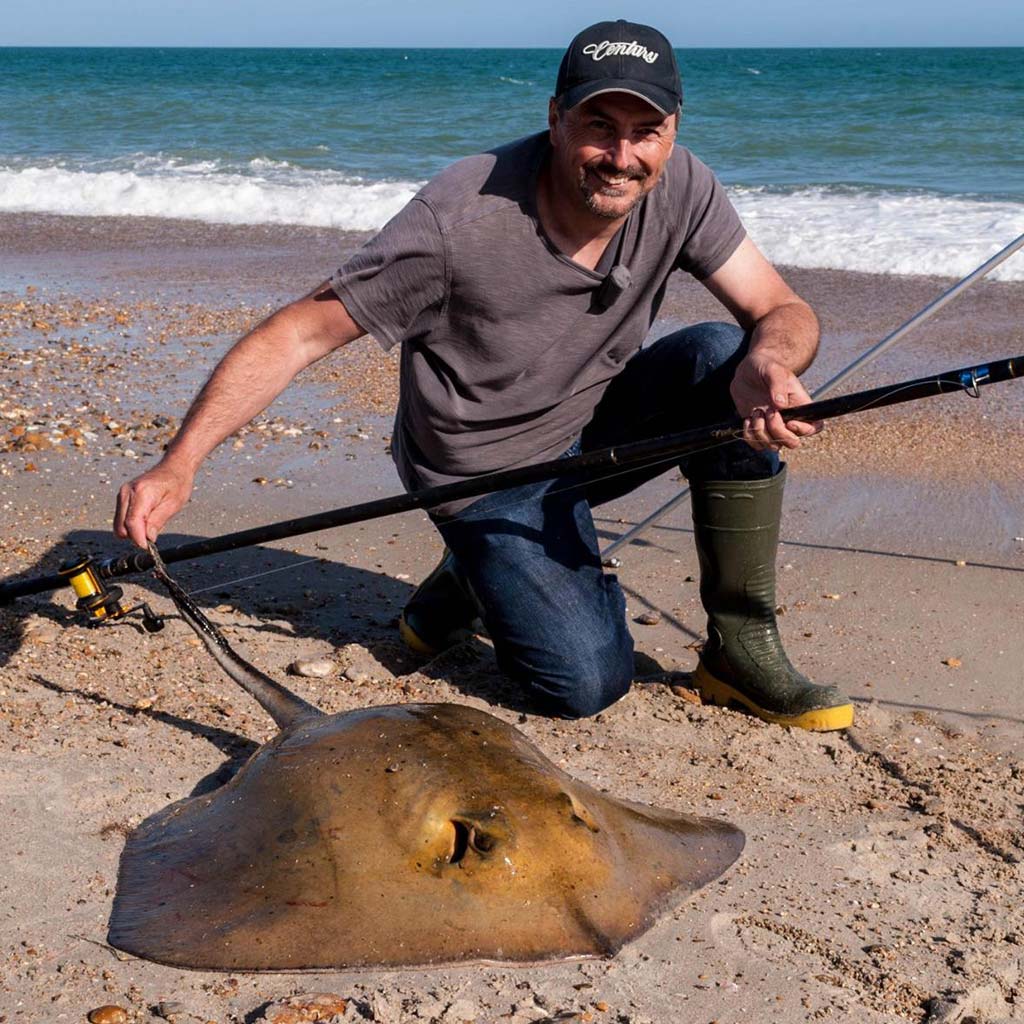 Preferred rigs and how long a hook length

A lot depends on where I’m fishing for them. Essentially a running leger is my preferred rig and if I’m fishing a venue where a bit of distance casting has an advantage, then I’ll use an up and over clipped down rig but, if I’m fishing a venue where only short casting is necessary,  then I’ll just use a straightforward unclipped running leger. My rigs are made up of 100lb Varivas rig body with a 5ft hooklength of 50lb clear Amnesia on the up and overs and around a 3ft hooklength on a straightforward unclipped running leger. Ultimately rig choice is all down to personal preference though, as pulley rigs will also work ok.

There’s no need to go too heavy on the mainline and a good quality 15 to 18lb breaking strain line  is perfectly adequate. I generally use 19lb Rovex 10x, which has a decent abrasion resistance and at only 0.35 dia it’s the equivalent thickness of most other 15lb lines. I try to avoid using thicker lines on the venues I fish, as the combination of weed and tide run, along with the increased drag that thicker diameter lines create, can make it more difficult to hold bottom and therefore fish effectively. As long as you have the drag set on your reel properly, then using lighter lines shouldn’t be an issue. 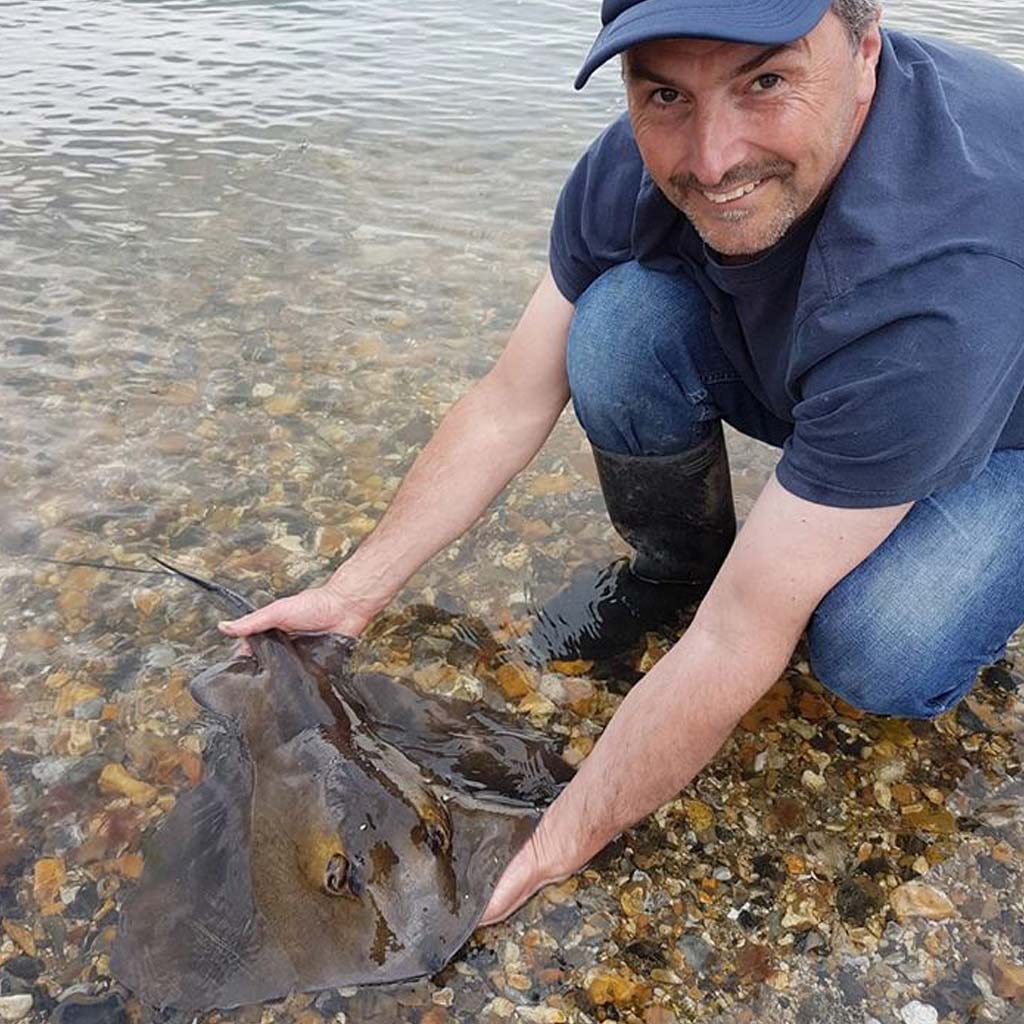 Best time of the year to catch them?

Stingrays migrate into UK waters around the middle of April and generally stay throughout the summer months before disappearing again in early Autumn. Mid April to mid June is usually the best time to catch one, with the bigger females usually the first to arrive. On my own patch on the south coast, the initial influx is to the East, in the Bognor to Pagham area, but these bigger fish usually only stay for 4 to 6 weeks before moving off again. The Solent area tends to hold them for a longer period of time but fishing for them during the summer months can be hard work having to contend with lots of weed, along with hordes of starving crabs and micro bream which literally strip your hooks bare in as little as five to ten minutes! However, if you persevere then they can still be caught from that area right up until around September time.

Not necessarily. They can be at any range and a lot depends on the actual venue and the conditions on the day. I’ve caught stingrays as close in as 30 yards and on other days at the same spot I’ve had them at 150 yards. If the conditions allow me to fish two rods, then I’ll usually fish one at around 50 to 70 yards and the other at 100 yards plus.

Is ragworm the best bait?

I’ve had all of my biggest stingrays on big ragworm baits but that’s probably because thats all I normally use when fishing for them. My preference is for 6 or 7 large worms, threaded on the hook then compressed down into a 7 inch or so sausage. However,  they can also be caught on crab, mackerel, squid and cuttlefish baits.

Can I catch these in Cornwall?

I personally have no experience of catching them outside of the Solent or West Sussex areas and although I’ve never heard of one being caught from Cornwall, it doesn’t necessarily mean they are not there. However, stingrays tend to be very localised, even in areas where you would expect to see them. The most recognised areas to catch them seems to be along the Essex coastline between Frinton-on-Sea through to St Osyths in the Blackwater Estuary, Herne Bay in Kent, the Bognor Regis area through to Selsey in West Sussex  then the East and West Solent in Hampshire. However, the current British Record fish was caught from Chesil Beach in Dorset. 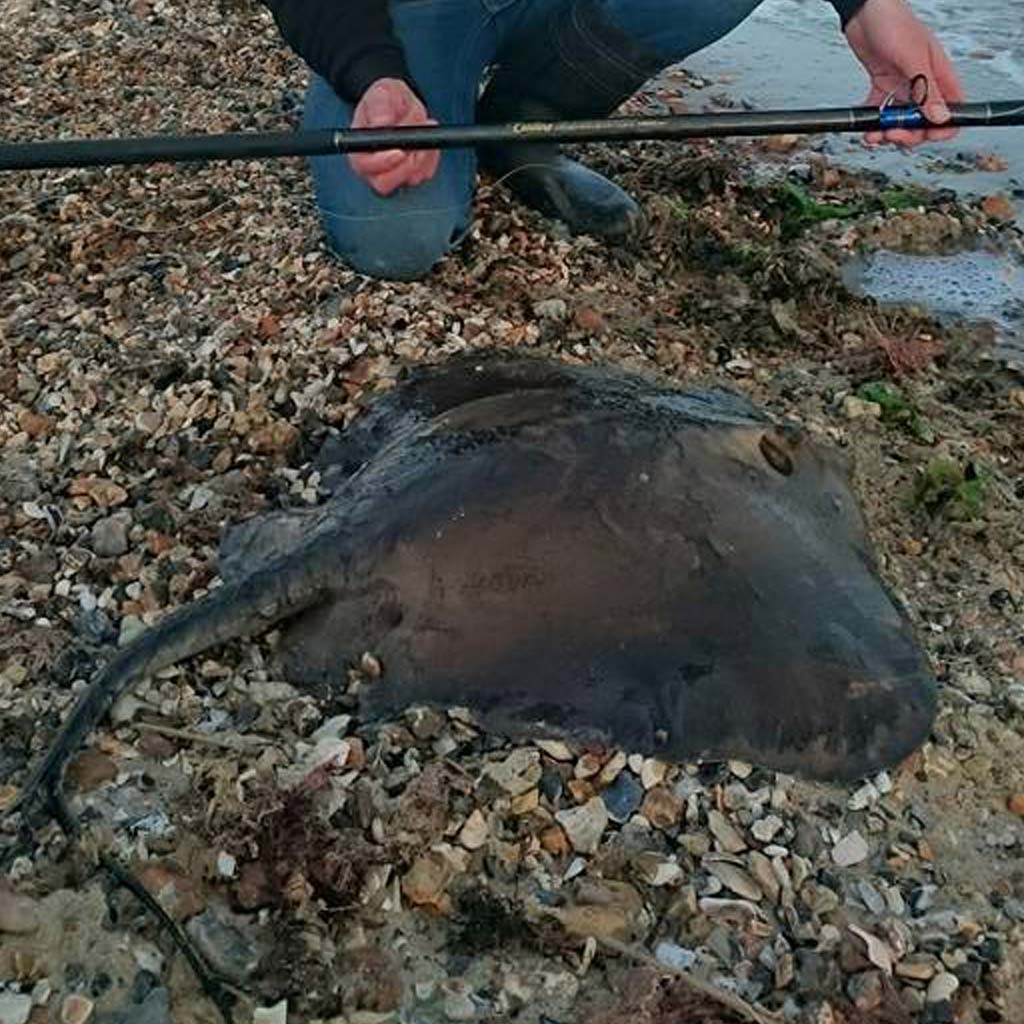 Stingrays can be a bit of a handful to land, more so the bigger they get. To land them, I usually surf them in on a wave until they are grounded then either drag them clear by the trace, if it looks small enough to do so without snapping the line, or by the breathing holes just behind its eyes, all the time keeping low and forward of the fish to avoid that tail. They’re  not called stingrays for nothing and they will slash around with that tail trying to stab you, often stabbing themselves in the process. There’s  never any real justification for using a gaff on these fish and I’ve not needed to use one on any that I’ve caught. Once out of the water, if you want to weigh it, a weigh sling is a must in order to support the fish properly, as is a tripod to steady the scales. Never hang them up by their mouth or lift them by their breathing holes as you can cause them serious damage by doing so. To unhook them I just lift up the nose and see if I can reach the hook by hand and then remove the hook if possible. If the fish has swallowed the hook right down, I’ll cut the line as close as possible to the hook, rather than try and pull it out. You shouldn’t turn them over on to their back ( which would be quite difficult to do so safely on a bigger fish anyhow) as this will damage the fishes protective mucus layer covering it’s back.

Do you think humidity has any impact on catch rates?

When I first started targeting stingers around 30 years or so ago, it was commonly believed that they only came inshore on warm humid nights after a hot settled day had warmed up the seabed. That is something I believed for a while and consequently wouldn’t even consider trying for them if the conditions weren’t spot on. Obviously because I only ever fished in those ‘perfect’ conditions, the Stingers I caught only reinforced that belief. However, one day I headed to the beach in a f5 or 6 south easterly one late April evening and it was freezing cold. I wasn’t hopeful of catching a stinger, even though one had been caught a few days earlier, but to my surprise I actually caught four of them. I’ve since caught numerous others in decidedly iffy conditions, so I’m not convinced that there is such a thing as perfect conditions, it’s more a case of simply whether the fish are there or not on the day. 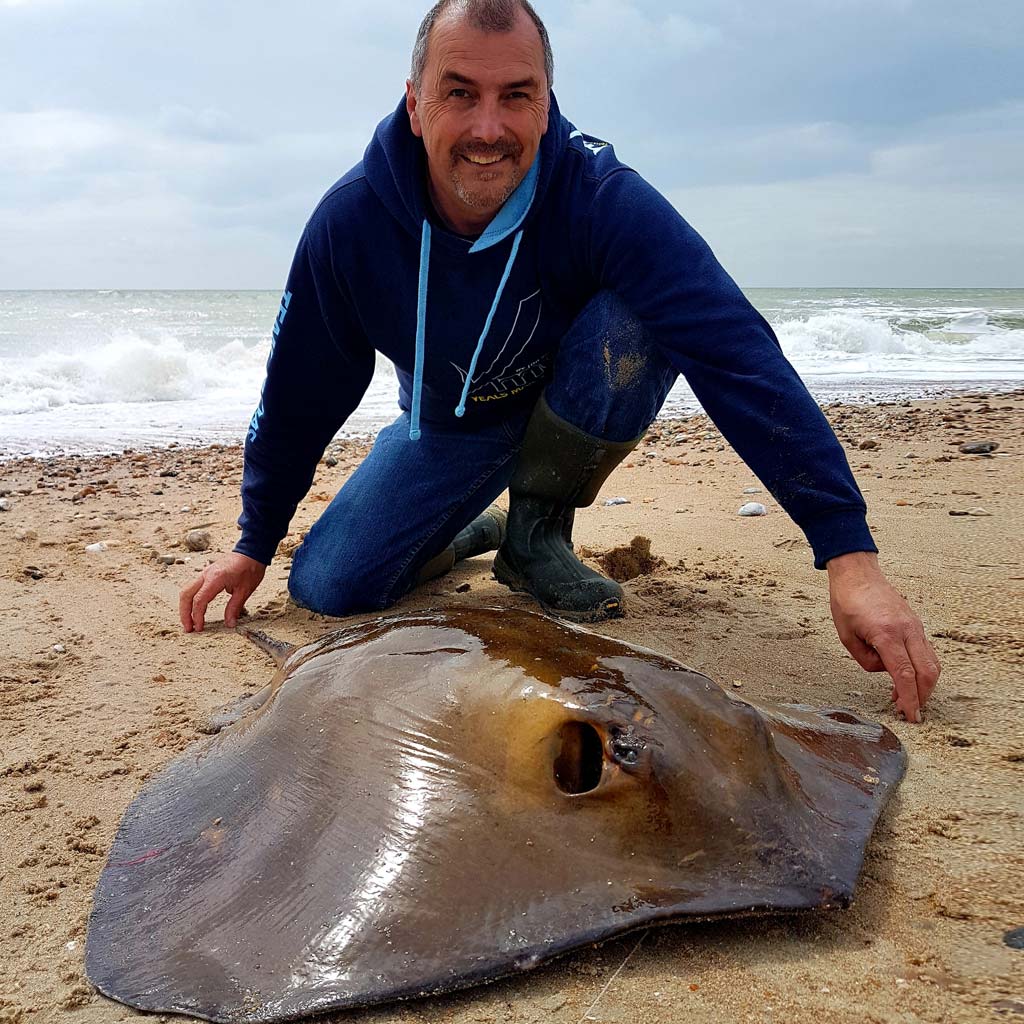 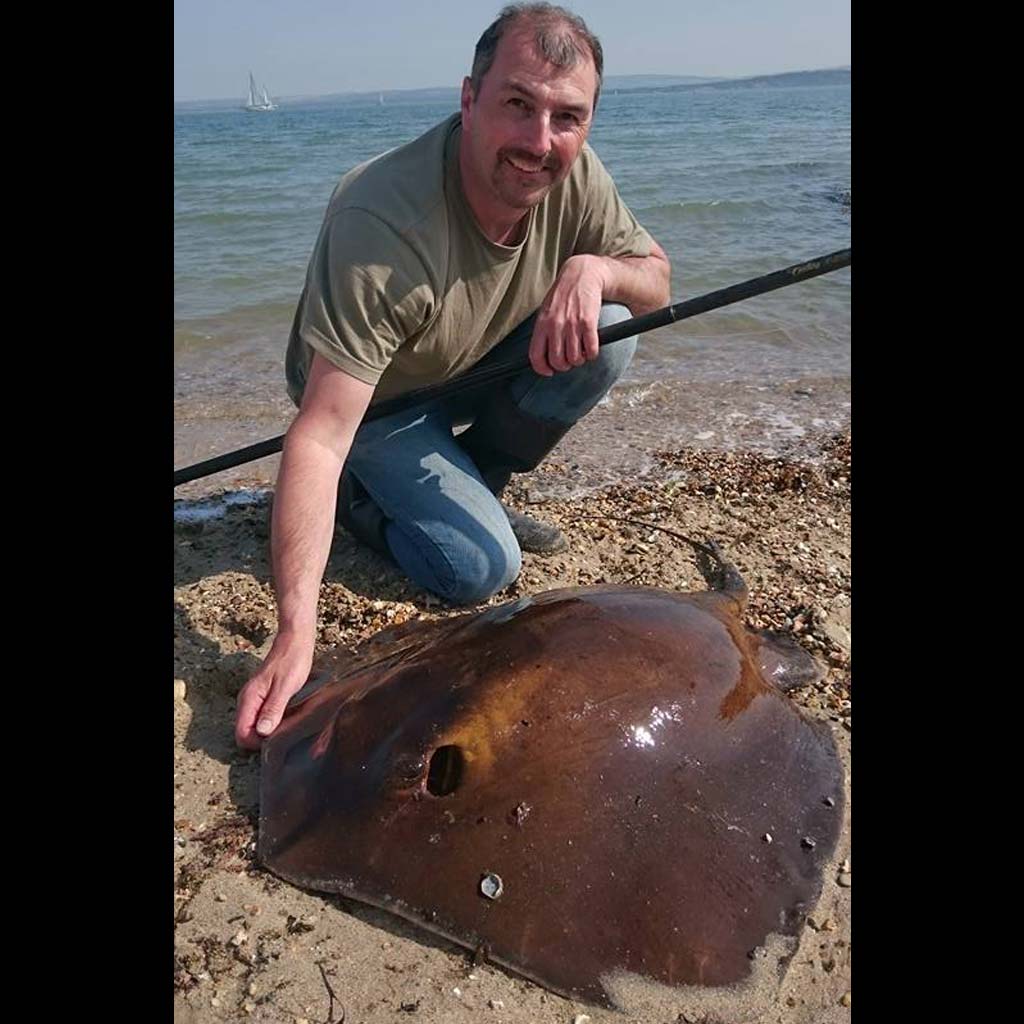 How many hours of fishing do you average per stinger?

Thats a tricky question to answer. I’m essentially a species and specimen hunter and I only manage to get out fishing once or maybe twice a week. Because I have fairly limited time to spare, I tend to focus on particular tides and venues when I feel I have the best chance of catching whatever my target species is at the time. When it comes to stingrays, I usually commit myself to around 5 or 6 sessions a year, sometimes less, as once I’ve got my target species I tend to move on to the next one. For instance, this year I’ve had four specific sessions for them, typically around 7 hours each time, and I caught one at 63lb 8oz on my second trip. Last year I had five sessions and had three, two on my first trip at 55lb and 58lb and one of 11lb on my last trip. I think on average though, I tend to catch them every other trip when I’m targeting them.

How long before we see the 100lb barrier broken in this country?

There certainly seems to be an increase in the size of stingrays venturing into UK waters each year with a fair number of 60lbers being recorded, particularly over the past two or three years. Prior to 1991 the UK shore caught stingray record was just 51lb 2oz, increasing to 54lb 9oz then 59lb 12oz in 2003 and was only pushed through the 60lb barrier in 2008 with a 67lb 12oz specimen caught from Pagham in West Sussex. The current record is 78lb 8oz, a fish caught by Guy Spriggs at Chesil Beach in 2015. Since then I’ve had four sixties at 63lb 8oz, 65lb, 67lb 8oz and 71lb 6oz and know of at least a dozen others between 60 and 70lb that have been caught over the same period. Several 90lb plus Stingers have been caught (and released) by inshore netters within the Solent, so the potential for a 100lb plus fish is certainly there. If these big Stingrays continue to visit our shores, then there is a high probability that the record will be substantially increased within the next few years. One thing is for sure, I’ll certainly be out there myself trying to find it! 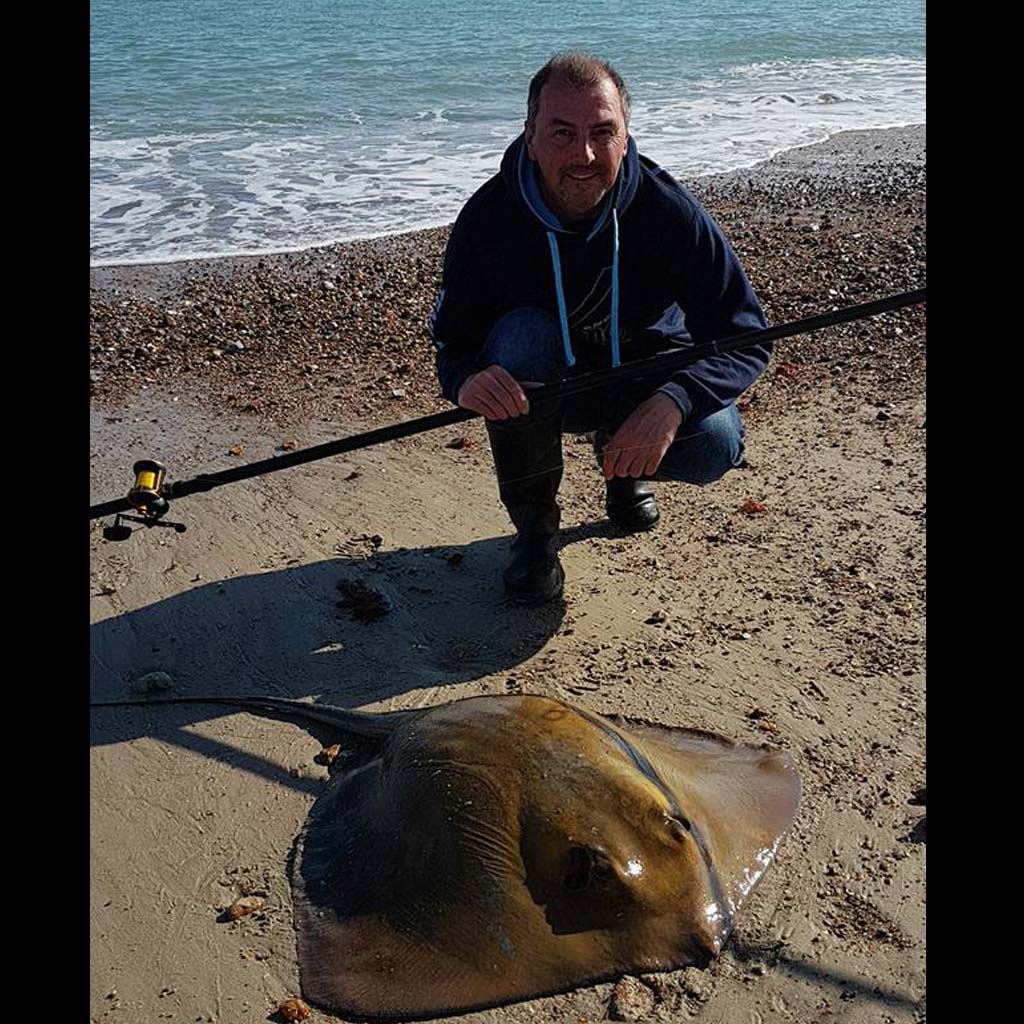