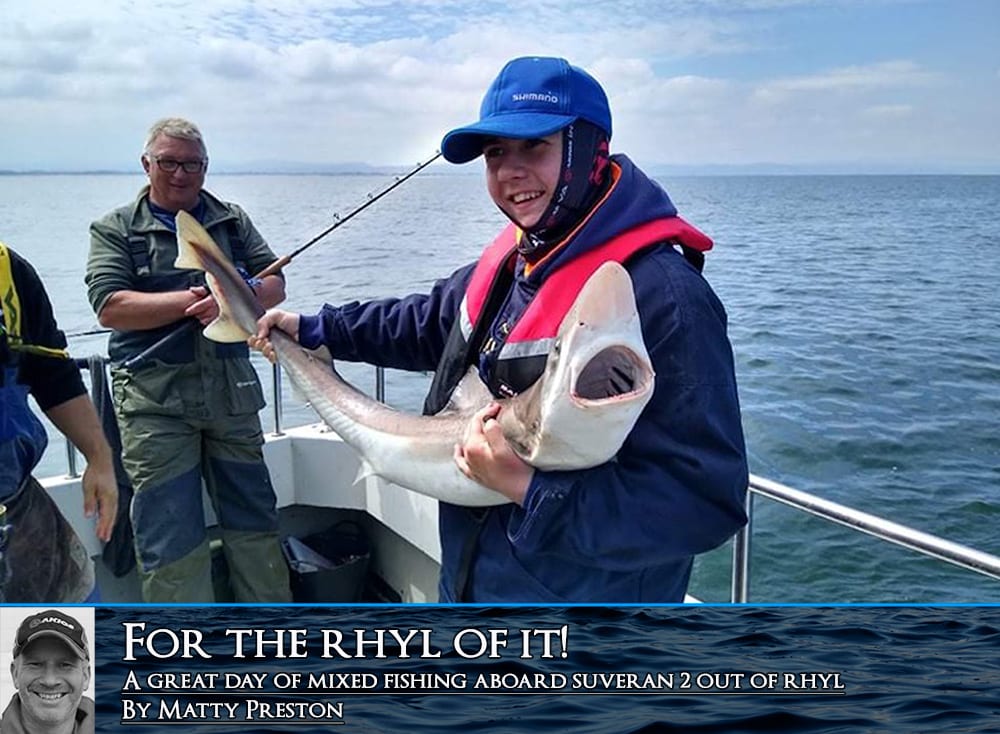 One of the things I have missed most over the recent pandemic has been my days out afloat. The sense of adventure, craic and camaraderie of a charter trip with friends form a huge part of my passion for angling.

So with the easing of lockdowns and some form of normality returning to the world I was very keen to make up for lost time and get the band back together. Calls were made, messages exchanged and a trip to “Sunny Rhyl” was booked…

The story of seaside resort Rhyl in north Wales is an all too familiar one. A once elegant Victorian resort falling from grace particularly strikes home to an angler from Morecambe (an area with the same issues) such as myself. What a shame it is to see these places struggling and a shadow of their former selves. That said, I must say I really like Rhyl. The harbour is beautiful, as are the beaches and countryside surrounding it. The place has character, and to the visiting angler offers some great fishing from both the boat and shore.

Rhyl’s fishing story has also had its share of hard knocks and decline. Commercial fishing pressures caused a huge fall in the numbers of thornback ray, turbot and spurdogs. The recent push for renewable energy has seen the horizon dominated by wind turbines. These have had an impact on the fishing, but that’s another story. Let’s just say that perhaps these solutions aren’t always as green as those pushing them may suggest and sea anglers need to make their voices heard more.

On the fishing front, at least it’s not all doom and gloom. My favoured charter skipper for this part of the world still offers some superb sport. His name is Tony Parry and he owns and operates the charter boats Jensen 2 and Suveran 2 (skippered by his son Simon) out of Rhyl from spring through to autumn each year. Tony is one of anglings great characters. A wicked sense of humour and wealth of knowledge ensures you will always have a good day afloat. He could also sell snow to an Eskimo so watch your wallets!

One of the reasons Rhyl is up there with my favourite venues is the variety of fishing available. Depending on tides and conditions there is everything from short trips inshore to longer wrecking trips available and a whole plethora of species to target. I have described it in the past as a “thinking boat anglers” venue. Drop your hook size and change tactics and suddenly you’re into species that the vast majority of anglers might not see. This also means a visiting angler should think carefully about the gear they bring with them. A day’s inshore fishing may suddenly become a bit of wrecking or lure fishing if conditions are right .Try to hedge your bets on the gear front and you can often reap the rewards.

Simon steamed out of the beautiful harbour at Rhyl, the morning was fair and the sun sent shafts of light through the clouds. It was hard to imagine that I had been pulling my hair out (metaphorically speaking as there’s not much left) all week over the weather forecast. Fortunately, things had improved and Simon had called the trip on at 6pm the night before. We were back out on the boat and I could not be happier. A quick stop for mackerel produced plenty for the bait buckets. It was going to be a good day. A quick chat with Simon formulated a plan for the day. I’m always amazed how many try to dictate to the skippers what they want to fish for and when. Why pay all that money to go out with an expert then not use that knowledge? First it would be drifting for bass, then out to try to pick up tope followed by a session for the hounds in the afternoon before heading in.

The bass fishing tactics are very sporting and great fun! Light gear is a must to maximise the enjoyment. A light boat rod or spinning rod is ideal. I use a short length of Wakasu fluorocarbon with a Turkana quick link at the bottom to enable me to change lures quickly. Your lure of choice is then lowered to the bottom and bounced as the boat drifts along a path of broken ground. In recent years I have added slow jigs to my lure arsenal, these have worked very well for bass so we opted to start with those. The rest of the crew were using more traditional rubber shads and sand eel imitations. Luke, our skipper Simon and I managed to find bass but they were not there in numbers on this occasion so after a few drifts we headed off to bottom fish a nearby bank in hope of tope.

Luke and the Elusive Tope

From right back when he first started fishing as a little boy Luke has liked to target his species. He has taken immense pleasure in “ticking off” good specimens before moving on to the next target. One that has proved a real challenge for him is the Tope. He has caught the tiny pups we get from the shore at certain times of the year but a “proper” one has eluded him. Even trips to well known tope venues such as Luce Bay and Fleetwood, whilst producing plenty of fantastic sessions, have failed to get him his target.

The anchor was soon lowered to the seabed, along with the rubby dubby bag and Suveran swung around in the tide. A quick tip for those not familiar with boat fishing. Always wait for the skippers say so before dropping in, it saves embarrassment and tangles! Simon gave us the nod and fresh mackerel baits on running ledgers were sent overboard.

A few inevitable dogfish initially came over the side before Eddie Weitzel struck into something that certainly was not a dogfish! Headshakes and a couple of good runs left us in no doubt as to what he had latched into. Soon a feisty tope lay on the deck. A quick photo and Eddies prize was swiftly released. Those interested in angling history may well recognise the name Weitzel but for those who don’t, Cox & Rawle perfected up-tiding on his father’s boat and started a whole new era of boat fishing. It’s always great to hear Eddie’s recollections of that time… but that’s another story.

It’s always interesting to see anglers react when the first fish comes aboard. The laughs and banter which had been non stop ease as people suddenly focus more strongly. Rigs are checked, baits changed with more regularity and rods watched with zen like concentration. Crew member Martin Foxcroft was soon into another Tope. This one took a bait dropped right at the side of the boat and gave him a real run around! The fish had him all around the boat and wouldn’t give in even when landed, a real scrapper!

Then came the moment Luke had been waiting a long time for … his Akios Nano-tech boat rod gave a couple of gentle taps and he picked it up from the rest.

“Looks like another doggy bite dad” he said seconds before something set off like a rocket! His ratchet screamed and the look on his face was priceless. I hope as you read this that you will forgive a proud dad waxing lyrical, but he did brilliantly. He had learnt from his missed opportunities in the past, remained calm and wound into the fish. The rod bent satisfyingly, and his fish was on!

He stayed in contact as the fish ran away, turned, then ran straight back at him before hanging deep and giving head shakes. We were all willing him to succeed. After a couple of last short charges for freedom it became evident the fish was tiring. Luke eased it to the surface and the skipper slipped the net under a lovely male tope. There were cheers and smiles all around. A few quick snaps were taken, and his prize slipped back. Tope was most certainly ticked off his list!

In the intro I mentioned about having to be flexible when you come to Rhyl fishing and what happened next shows why. The skipper got my attention and offered up a suggestion. With the weather calming and tide run easing would we fancy jumping on an inshore wreck? Of course we would! Up came the anchor and off we headed whilst I dug around in my box knocking up short running ledgers and wrecking rigs for those who didn’t have any. Once settled at anchor, Luke was once again into the fish. A cracking thornback had him smiling.

Martin Foxcroft, an angler famed for his uncompromising heavy gear approach, was going against type and catching lots of small species on baited feathers. Other anglers were also getting bites and fish. One angler losing a conger part way up had us all focused on the bigger stuff once again. Luke had an insistent rattle on his rod tip that he wound down into and was amazed as his rod went over double. I had already warned him that the first ten foot were crucial, you just can’t let them get back into the wreck.

I watched on and winced as his Akios 12-15Lb Nano-tech was bent double. Imagine the thought of your kid losing a fish and a rod you have helped design break in front of a boat full of anglers, no pressure! I need not have worried as the conger was soon on the deck. Luke had now caught his tope and first ever conger in one trip! I think his Grandad, Robin, a former conger club member was as pleased as Luke was! More species came overboard before we headed back in close to shore to finish our day on the hounds.

The day was finished with a final hour of catching hounds right on the low water mark on light gear. Simple running ledgers with either squid or crab on the hooks did the damage. I must admit to tuning out a little for the last hour. We had enjoyed a wonderful day, in great company and Luke had experienced a day I hoped he would not forget in a hurry. Everything was good with the world.

If you have never visited Rhyl or sampled the amazing fishing it has to offer then I seriously recommend it. Get a group of friends together and get out there. You will not regret it.

As for me..? I wonder if Luke fancies trying for a skate yet?