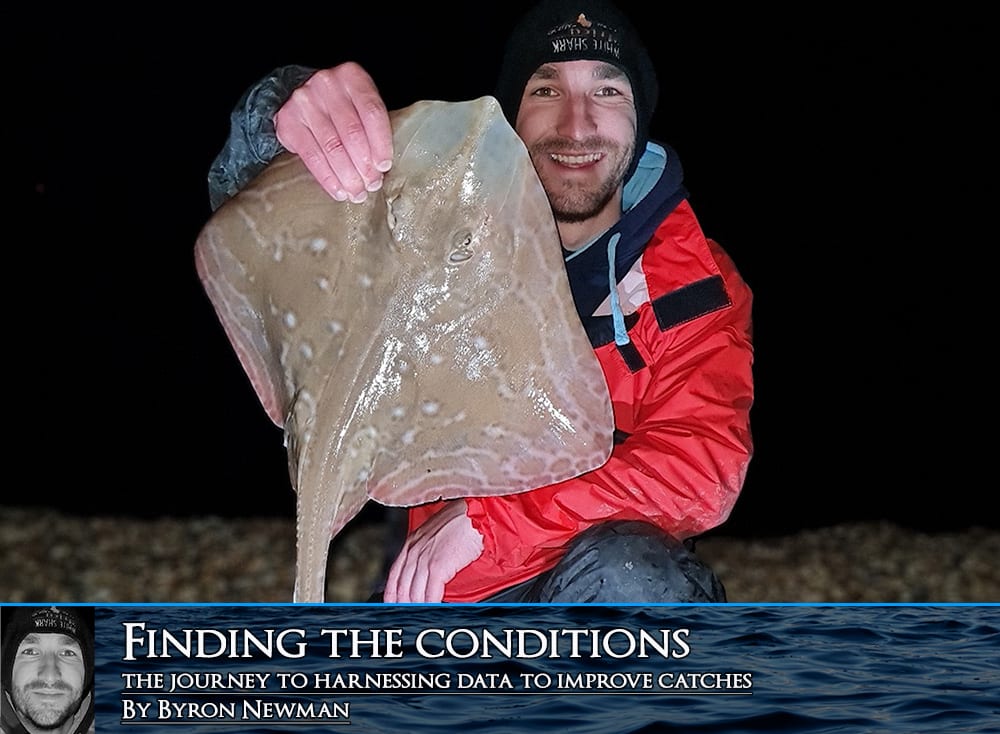 What dictates when you decide a fishing session is on the cards? The tide times, the state of the moon, weather conditions, the more recent phenomenon of a few decent catch reports on social media or merely, I don’t have work tomorrow so why not? The age-old adage being “I’m not going to catch anything sitting at home”.

Since I started sea fishing around five years ago I’ve certainly followed all of the above. My first two years of fishing yielded few results: dogfish, whiting, strap eels and the very occasional thornback ray, just enough to keep the interest going. In those early days I was simply happy to be out, chancing my luck. Report of a cod from Gillkicker? Great, I’d be there for the next few days without even looking at a weather report or the tide times. Big squid and, occasionally, black lug baits were cast out as far as I could back then, although in reality this was probably only about 50 yards. I recall many a session with my brother (Lloyd Newman) in those first two years on that mark, battered by strong south westerly winds and sideways rain, without waterproofs or a shelter. We never did (and still haven’t) caught a cod from that mark, but then again those who did should probably have used that luck buying a lottery ticket.

After seeing repeated reports on social media from the same people (I’m sure some names jump straight out in your head) I decided there must be more to this hobby than just chucking a bait out and hoping for the best. In 2018 I decided to start recording all my fishing sessions, tides (low water / high water times), sizes, moon phase, wind, temperature (mainly for stingers), location on beach, time spent fishing and bait used. The following three years have seen my fishing improve drastically to the point where I’m now reasonably confident that I can choose the right mark to suit the prevailing conditions and I’m in with a reasonable chance of landing more than one of my given target species. At the moment I am mainly concentrating on catching rays on the south coast.

Standard ray bait was the order of the day, sandeel and squid wraps.

My favoured rig for targeting any ray species on the south coast is the pulley dropper rig with approximately three-foot snood paired with a 3/0 Sakuma manta with a circle Sakuma hook on top. Like it or loathe it, the pulley dropper is a rig I have complete faith in, even though it doesn’t fish the way I’d imagined. Confidence plays a large role in successful fishing is and this rig is one I have had a lot of success with.

As the full moon approaches, I like to focus my efforts on venues that have a reasonable depth of water, anything from 15 foot or above. The theory being that the less light penetrating and reaching the sea floor the more comfortable the prey species, such as sandeel and shore crabs, feel moving about and greater availability of prey should result in greater numbers of predators (in theory).

With this in mind, the chosen venue for a full-moon session is often Hordle Cliff, Hampshire, targeting small-eyed rays. I really enjoy catching this species, even if from this particular venue the average stamp of fish is only between 4-7 pounds. The wonderful colouration and the fact they are a reasonably good fighting ray species make them a pleasure to target from the shore.

Every time I fish a venue, I try a slightly different spot to the one previous until I have established an area that produces fish consistently. I actually really enjoy working out precise locations at each venue so when the fish are in I can capitalise and catch in numbers. With this in mind, I chose a new spot on the shingle and got the rigs baited and sent out. I always try and resist the usual urge of sending both rods out as far as I can and try a more systematic approach, with one in close and one out far to try and establish where the fish are feeding.

First casts were sent out two hours into the flood and within the first 15 minutes I could see my rod giving a typical ray nod. After picking up the rod and waiting for that pull I simply wind in a few turns and carefully set that circle hook, not striking, just lifting into the fish. After a spirited tussle, a lovely 5lb small-eyed slides onto the shingle.

The following three hours were non-stop action, with the following casts producing similar results. Just as I had clipped on the spare baited rig and cast it out, I noticed the second rod nodding away and as I’m beaching a small 2-3lb small eyed ray, the first rod starts to show signs of life again. A nice brace of small eyed’s resulted. This was followed by a far more aggressive bite on the closer in rod and after a nerve wracking but gentle retrieve, a bass of around 3-4 lb appears in the surf.

Before I can even unhook this, the second rod nods away again! I don’t even bother letting the bite develop and just lift straight into another small ray, resulting in a great (if unusual) double shot photo. After the top of the tide the dogfish started to make an appearance, so I decided to call it a night, ending with a tally of 5 small-eyed ray to 6 lb, bass, strap eels and the odd dogfish.

The following month’s full moon was accompanied by a 15mph northerly wind and I decided to return to the same venue for another session, this time with my brother Lloyd. We arrived at the venue at around one hour after low water, as looking back at previous visits to Hordle in the diary indicated this is when the rays are likely to start to feed. Following the success of the previous month I decided to fish close to the same spot.

The first hour and a half proved unproductive but baits were coming back in untouched, with not even signs of shore crab abuse – not a very impressive start.

Lloyd’s rod, cast at around 30 yards, was the first to show movement with a quick few pulls, less aggressive than a typical bass bite. Connecting with the fish, his hopes high with anticipation, his target appeared – a beautiful spotted ray.

This set the tone for the next two hours, with Lloyd’s rods in constant motion. A few missed bites, which is always annoying, but he was more than happy with a surprise 7lb thornback ray, an unusual species for this venue. He finished the hat-trick with a reasonably sized small-eyed.

Next it was my turn to get in on the action, again the close-in rod the first to move. Similar bite, similar result and a pristine spotted ray started gliding across the surface. 30 minutes later, I hear line the tearing off the reel and I run over to my rod and lift into a powerful fish, which to my surprise turned out to be a 6lb small-eyed and not the expected smut appearing out of the depths.

Nothing else happened after the top of the tide so we decided to call it a night. An interesting note is that all the fish came within a 3-and-a-half-hour period, first on Lloyd’s rods to the right then all on my rods to the left, a pattern we have started to notice along this stretch of coast and something to consider for future sessions.

The amazing and addictive thing about sea fishing is you never know what is going to take that bait, fish of the sea are not bound by barriers and are free to come and go as they please. Decent fish can turn up on any venue at any given time, but that isn’t a very productive philosophy to have when setting off on a shore fishing session with a particular species in mind.

I like to think that when targeting south coast rays as long as I have picked the conditions: tide, moon, wind, etc I have swung the odds more firmly in my favour of hitting several of my target species. 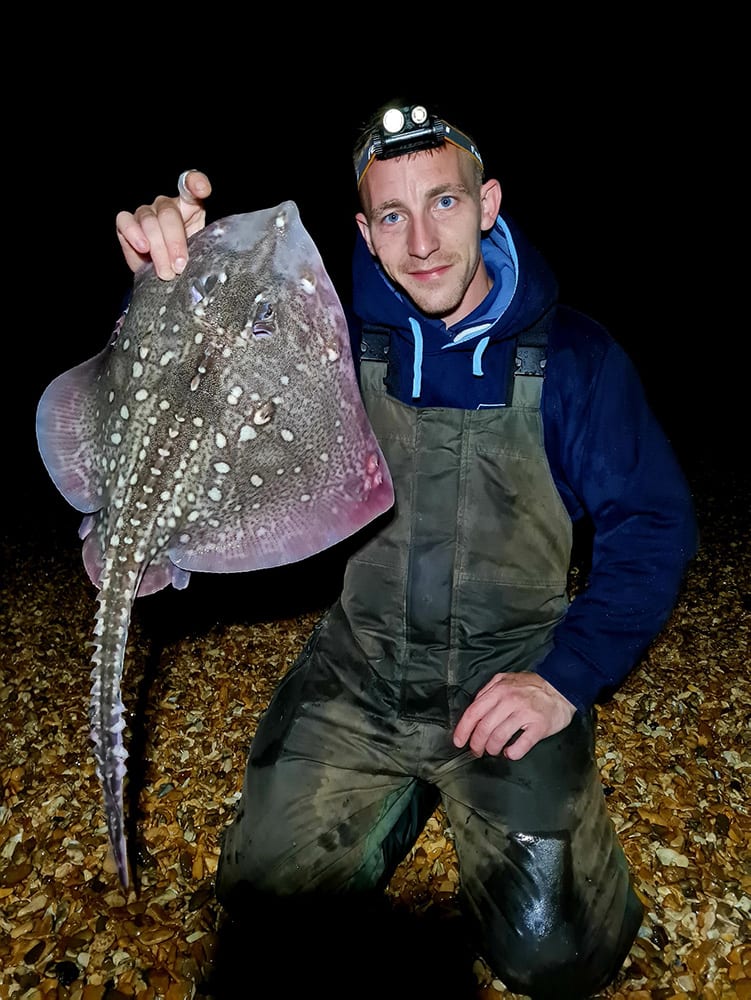