Menu
PrevPreviousWhere have all the flounder gone? 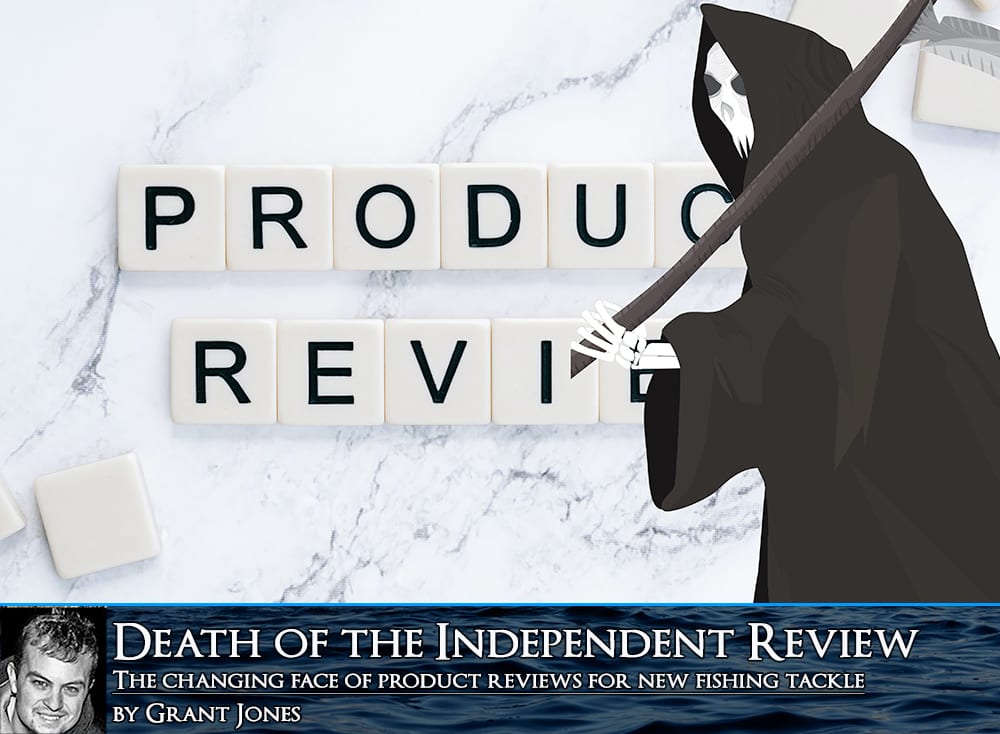 Are independent reviews of fishing tackle dead in the water? It’s a question I’ve pondered considerably over the last few weeks and months. It’s led me down a number of rabbit holes, searching out independent reviews, challenging whether they really are independent, beginning to question whether there is even a remaining appetite for such reviews, and wondering what it means for modern day angling marketing.

There’s a number of areas I am inclined to believe have led to the change in tact for tackle reviews, the first and foremost of which is social media. On the face of it, Facebook, YouTube, Twitter and so forth make reviews more available, and Facebook groups in particular allow views far and wide to be heard. There’s an argument that social media could have led to a new world of fully independent reviews. We’ve seen it with other industries, not least TripAdvisor. So why have we seemingly gone in completely the opposite direction within angling?

The answer seems to lay in the latest growing fad of ‘pro teams’, which, from a business perspective, make a lot of sense, but could be highly damaging in the long run to the consumers less they be aware.

Brands are snapping up individuals with considerable reach left, right and centre. Reach in many cases being the key driving factor far beyond anything else that may be bought to the table, such as diplomacy or specific design expertise. Not surprisingly so either, these ‘pro teams’ are typically a marketing strategy first and foremost, with a by-product of aiding in research and development. Even then, their contribution into R&D may be flawed. There’s a danger the mentality created within such teams leads to ‘yes men’ when not carefully managed. Say one wrong thing, and will they suddenly find themselves no longer in line for a free or heavily discounted prototype rod? The psychology of it is tantalisingly delicate and even the casual observer will note how some brands manage this far better than others.

With the ascent of these ‘pro-teams’ into normality, with almost all brands now deploying them, it comes as no surprise that upon the release of a new product, there’s already a dozen or more reviews circulating before it has even hit the shelves, let alone sold. Then, these reviews just don’t add up – aside from the fact that they do all come to the same net result, every single member of the given brands pro-team will be absolutely in love with the newest product and somehow consider it the best thing since sliced bread. This is what doesn’t add up…

Let’s take rods, or reels perhaps, as an example. If you take a walk along Chesil or any other busy beach on a weekend, there will be a massive variety in tackle being used. Some will be pushing lighter rods to their extremes, others preferring to be over-gunned just in case. There will be those preferring different weights of fixed spools to balance different rods, to suit different casting styles. The variations will be everywhere because, no two people fish the same and therefore get the same feedback from a rod and reel. Likewise the same can be said for just about every other product going too – we all have different wants, different ways of doing things and therefore will come to very different conclusions on items of gear, besides more factual elements like ‘is a waterproof actually waterproof?’

So just how are sometimes up to a dozen or more anglers in a pro-team, all of whom often partake in slightly different disciplines of our sport, so routinely in alignment on their endorsement of a product? You’d expect at least one, if all were independent of mind, to stand up and say, at the very least “Seems a nice bit of kit but it just doesn’t work for me”. How refreshing the day will be when we hear those words.

All of this, one would hope the majority of people find transparent. Though to the average angler, they may not be aware of who is and who is not a pro-team member. The way many put their comments across on social media alludes to being a typical punter with no disclosure given as to the possible bias in their statements. This at best is ignorance on behalf of these people, and at worst deliberately misleading. It isn’t something we will stop either, we simply have to find a way to live with it.

Though back to Facebook groups allowing everyone to have their say. The most disappointing net result of such pro-teams is seeing a small number of them (it genuinely is a small number, most hold themselves to a very high standard) utilise their pro teams as a mini army, ready to stamp out any comment from anyone who may not have such a glowing endorsement of whatever the latest and greatest product may be. Many of these pro-team members even administer Facebook groups, having the ability to censor any comments they do not agree with; as such, for the punter perusing a thread for the positives and negatives on an item, they have no way of knowing if comments have been removed. Is it not strange too, how frequently a thread on a “Please suggest a…’ type post, will have dozens of comments recommending some brand new product hardly in anyones hands yet, and so few of tried and trusted items that have stood the test of time?

The pitfalls of social media here are therefore apparent. But is it the consumer themselves that is driving this as a necessity in the first place? Are we now so materialistic that instead of wanting something of proven quality, we just want the latest shiny new toy? Are we forcing these brands into constantly releasing new products, rather than perfecting established ones, because of our endless desire for something new?

If this is the case, what choice do the brands have, but to create a false ‘frenzy’ around the release of a product, when they know there is a limited timeline in which to sell it before they must move on to the next new thing to satisfy the consumers desire for more more more?

So how do we change this? We cannot expect the mentality around marketing to change if we do not change our own behaviour as consumers. So, I am going to change my own behaviour in this regard, and I wonder how many of you would be prepared to do the same? I am no longer going to purchase any newly released product until it has been on the shelves for a minimum of 6 months, or for items that I would expect to last longer, like rods and reels, a minimum of a year.

The message I give with that, is make quality items that will prove the test of time. Trust in the items to create their own frenzy. Reign in your pro-teams from creating a manufactured narrative and put the faith back into the product. Or at the very least please make sure it’s really really shiny because… ah, see, there I go already!