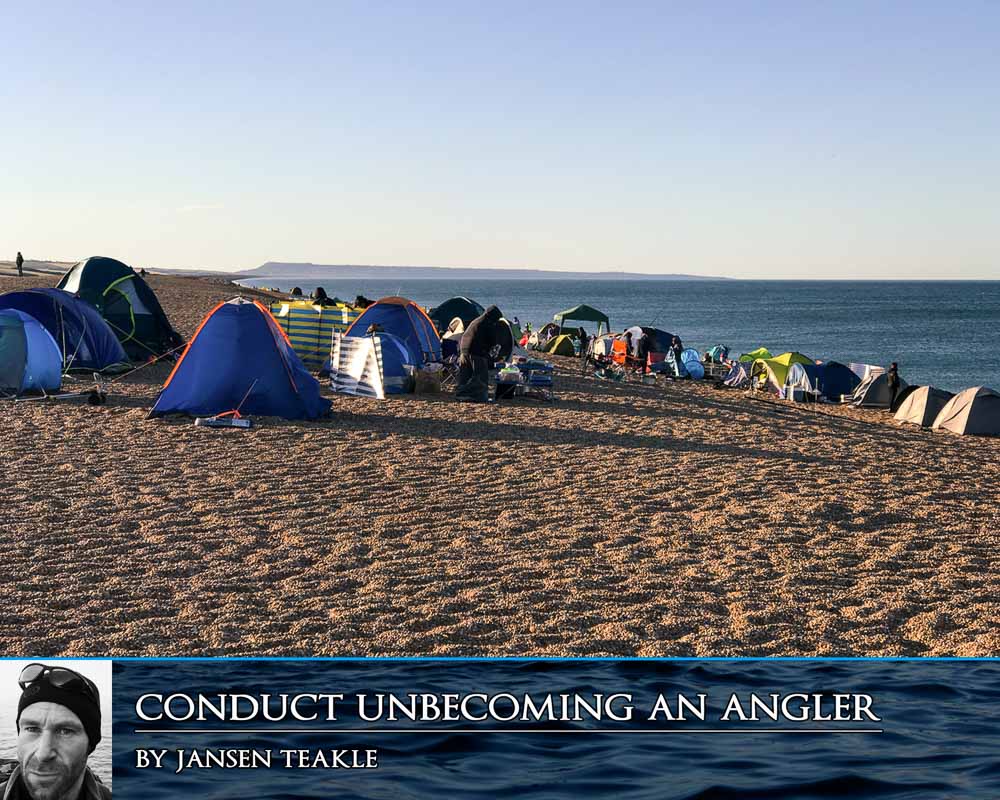 This isn’t the first time I’ve spoken about how anglers are perceived in the public eye (and it probably won’t be the last) but how we are viewed by the man in the street is crucial to our sport’s growth and, indeed, its survival. With fragmentation and division rife within the sea angling community on the whole, it has never been more important to find some common ground. With our way of life under threat, we need to present a clean and as near flawless image as possible if we are to continue doing what we have always done with rod and line.

I write this piece in the hope that the vast majority of those reading recognise where I’m coming from and can identify the issues that the actions of a few could potentially cause for the many. It’s important to be aware of the damage that could be inflicted upon recreational sea angling from a lack of care and consideration by some appearing to participate in it. But before I do get to my point and to help illustrate it,  perhaps it’s necessary to lump sea anglers roughly into two groups – seasoned anglers and anglers of season. Seasoned anglers fish throughout the calendar year and anglers of season tend to appear on our beaches during the summer months. Just for now, please take this generalisation at face value, as it will hopefully help us shed light on an issue that has been a growing problem on south coast beaches for a number of years but is now beginning to escalate rather worryingly in some specific areas.

It would not be totally unreasonable to assume that seasoned anglers are more than loosely familiar with outdoor etiquette and, on the whole (though not without exception), have a greater respect for their surroundings. Through familiarity, they likely value our sport and recognise the importance of presenting it to the general public in a glowing light. In contrast, those anglers of season who appear on the beaches in their droves during the summer months have likely not taken the time to consider much more than simply casting a line and attempting to catch fish. Again, I’m speaking in general terms here and there will be exceptions, but in failing to take into account much more than the basic physical action of fishing, these anglers of season could inadvertently (or otherwise) be tarnishing the public image of sea angling with some aspects of their behaviour.

Remember, these are generalisations and there will be exceptions in both camps but for the sake of this piece and to highlight my point, it is necessary to identify the root cause of the problem if we are to look for ways to put it right. I’ve just referred to both sides as camps and this is actually quite appropriate given the demographic that I’m mainly alluding to: the encampment style fishing communities that appear along beaches such as Chesil throughout the summer months, often for days or weeks on end. Ranging from huge and expensive eight man tents to brollies, windbreaks and everything else in between, this colourful mosaic of fabric usually springs up adjacent to the major car parks from around May onwards. These anglers, their family and their friends descend en masse in what appears to be a beach camping free-for-all (but without the fees associated with a recognised and managed camp site). Whether this is a vacation with fishing rods or an extended fishing trip likely varies from tent to tent, but what is clear is that most if not all of these encampments contain anglers of season.

The presence of shoaling mackerel that move within easy casting distance of the beach has long been a draw at these places during the summer and, understandably, many anglers want to get in on the action. But the etiquette (or lack of it) and the actions of these groups is questionable at best and, at worst, evidence is mounting that some are engaging in illicit activity and taking fish for reasons other than reasonable personal use. According to some sources, restaurant owners seem to be the main culprits and witnesses have seen groups appearing to work in teams to catch and transport fish round the clock, all the while masquerading as recreational sea anglers who are there solely for personal enjoyment. Not only is this illegal but it’s about as far removed from the sporting ethos of the recreational angler as you could possibly get. Those anglers I have spoken with and who have witnessed such events are understandably reluctant for their names to be published for fear of reprisal, but three separate eyewitnesses have recalled events on the shingle which could point towards more than just a small scale operation for a little pin money. One angler even told me that a child was involved in ferrying buckets of freshly caught mackerel to a waiting van that returned several times that day. Two of the three anglers I spoke with also feared the wrath of liberal movements, at a time when racial tension is high and singling out any group of individuals happening to belong to a minority ethnicity is frowned upon.

The worst thing about all of this though is the fact that it is happening under the noses of anglers who are innocently fishing at these locations. Those individuals engaged in illicit activities are no doubt fully aware that they have a perfect disguise and will do their best to blend in with the many others who are there to catch fish for enjoyment. Furthermore, you can pretty much guarantee that should any illegal activities be proven and brought to attention by our wonderful press, those guilty parties will first and foremost be described as anglers – once again casting negative light upon us as a group. Yet another example of the unsavoury actions of the few having a far reaching influence on the general public’s perception of the sea angler.

But just what can be done to put an end to this growing problem and is overnight camping on the beach really that big an issue in the grand scheme of things? I would suggest that there is a distinct difference between a single angler or a couple of mates at the water’s edge using a shelter to keep the elements at bay and a group of anglers and their families setting up shop well back from the water and within spitting distance of the car park. I would strongly advise against any angler looking upon a beach such as Chesil as a camping free-for-all to take the family to for a week in the summer holidays. In doing so, not only are you taking revenue away from licensed campsites in the area (at a time when they need it the most) but you’re also inadvertently assisting those using these ‘fishing villages’ as camouflage to conceal their wrongdoings. As I’ve said before, it’s not for me to tell anyone their business but please do consider the consequences of your actions.

If you should happen to witness events that you feel are wrong for whatever reason and that might suggest the retention of fish for anything other than reasonable personal use, please dial 101 and inform the authorities of what you have seen. Many anglers will fill their freezers with bait but witnessing fish leaving the beach and being loaded into a waiting vehicle over and over again is something different altogether. Us sea anglers are often quick to point the finger at large scale, licensed commercial activity out at sea when it comes to the decimation of fish stocks.

But with species such as mackerel easy pickings for the unscrupulous, and an undetected and highly efficient business model replicated across the length of the south coast going under the radar, it wouldn’t be too far of a stretch to see where a good proportion of these fish might be ending up.

Let’s at least try to put an end to it.