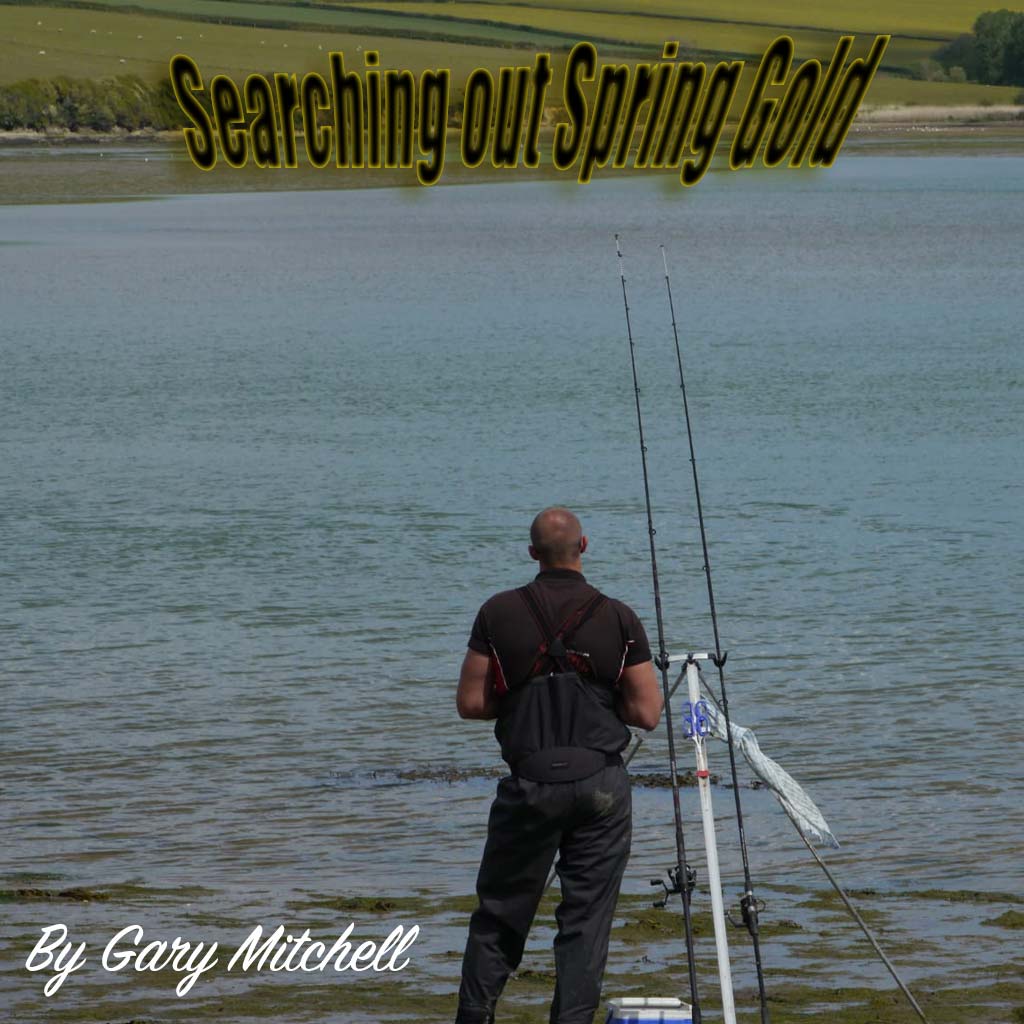 This year seems to be flying by with spring giving way early to warm settled weather and warming waters once again brings our interests to estuary fishing for gilt head bream, one of my favourite fish to target. I really do not do enough of this type of fishing which I really find takes me back to my childhood days and makes me very nostalgic, with warm weather, light gear, simple set ups and care free fishing.

A lot of other commitments and other areas of my personal life has reduced my fishing this year drastically, having only had five or so trips since Christmas I had got into a rut of struggling to get the enthusiasm to go. The beginning of the year can be very hard fishing across the board so the more I didn’t go the harder it was to motivate myself but, with the warming weather a trip on the gilts was in order and after a chat with Carl and John a trip was planned.

As soon as I started to sort my gear for the trip I was getting excited about the prospect of catching a gilt. For those that know what these fish are capable of, you will understand my eager anticipation, whilst for those who a are yet to catch one, I thoroughly recommend giving it a go. it can be very exciting fishing with the explosive takes literally ripping the rod out of the stand and then the hard dogged head shakes and powerful runs can be outstanding for fish of their size. When you land them they are such beautiful fish and also one of the tastiest in our waters which is an added bonus for those who like to eat some of what they catch.

Setting up for gilts is simple stuff and a 2 1/21b test curve carp rod is ample, typically matched with a 5000 sized reel. I use 121b main line with either a running ledger or bolt rig, 2 or 3 oz flat weight dependent on venue with 151b flurocarbon trace and a size 1 varivas chinu hook at the business end. This is then baited with a nice juicy crab, securely whipped on making sure the hook point is fully exposed!

We arrived at a mark in Kingsbridge, South Devon, armed with fresh peelers and having decided to fish one rod each as two rods can be a pain if it’s weedy, or if the gilts are there then more often than not you will catch more on one rod than two because you can be more alert and prepared. Unfortunately on this occasion it was very weedy and made it hard work with the light gear but, as the tides eased back the weed got better but the other common problem with estuaries materialised, it went crabby for half hour or so! This is generally not a good sign, as normally if the gilts are there the crabs are hiding! 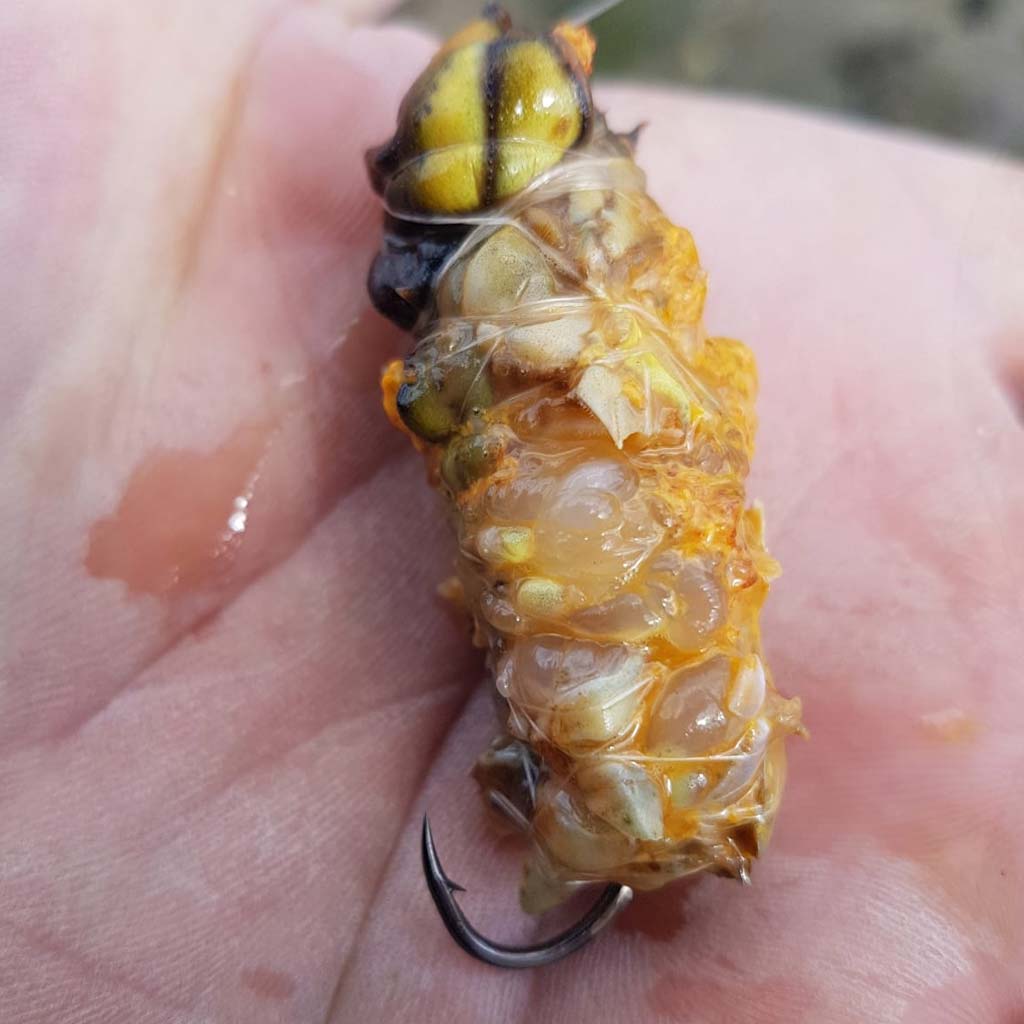 After another hour or so my rod arced over violently! Gilt on! It was evident straight away it was a small one but, pleased that the first of the year was acquired, I quickly released it, did a rebait and recast and literally as soon as I put it in the stand it was keeling over again! Fish on again, which was quite strange as I was in the middle of Carl and John. Once more it was no monster but, a gilt a bit under 2lb was landed, quickly photographed and released before I was back to it. We then hit a slow spell for an hour or so with no bites whatsoever. It was by now very low in the tide and the mud was getting very sloppy. John then missed a very good take, which was unfortunate but, gilts can sometimes be a pain to get a hookhold if you don’t get them in the scissors of the jaw due to there hard strange crushing pad type teeth.

As the tide started to make it was Carl’s turn and his rod again registered a classic violent gilt bite but, again the stamp was quite small. Small or large, as mentioned earlier, these fish are magnificent to look at in the flesh and a real pleasure to catch, so we don’t begrudge the stamp coming out even if we have had better averages previously. Time then began to tick away with very little happening so the decision was made to call it a day, so we went to reel in. As I picked my rod up I had a small jerk in my hand so I held it for a second and wallop over it went! Unbelievably I had another gilt on.

I wasn’t expecting this and it was also quickly apparent that it was a bit better fish but was extremely heavy in addition to a bit more in the fight, so I knew I had weed on as well, which unfortunately killed the fight a fair bit. As I guided it into the shallows it was forced onto it’s side and the evening sun lit up its flank like a mirror with the distinct gold bar across its head and I was extremely pleased to see it was a more reasonable size. It pulled the scales to 3lb 8oz and unfortunately it was deep hooked and was bleeding heavily so it came as no surprise that it refused to go back. It wasn’t to be wasted as it got kept for the table, which i didn’t mind too much as it’s one of my favourite table fish and with that we called it a day.
Feeling invigorated and re-enthused, a return trip a few days later for myself and Carl with a better tide unfortunately only produced a few missed bites, some school bass and one small gilt for me but, that’s fishing! Being back out fishing and enjoying the spring evenings around the calm estuaries with the array of wildlife and birds and solitude certainly has given me the kick start needed to get my act together and enjoy my down time. 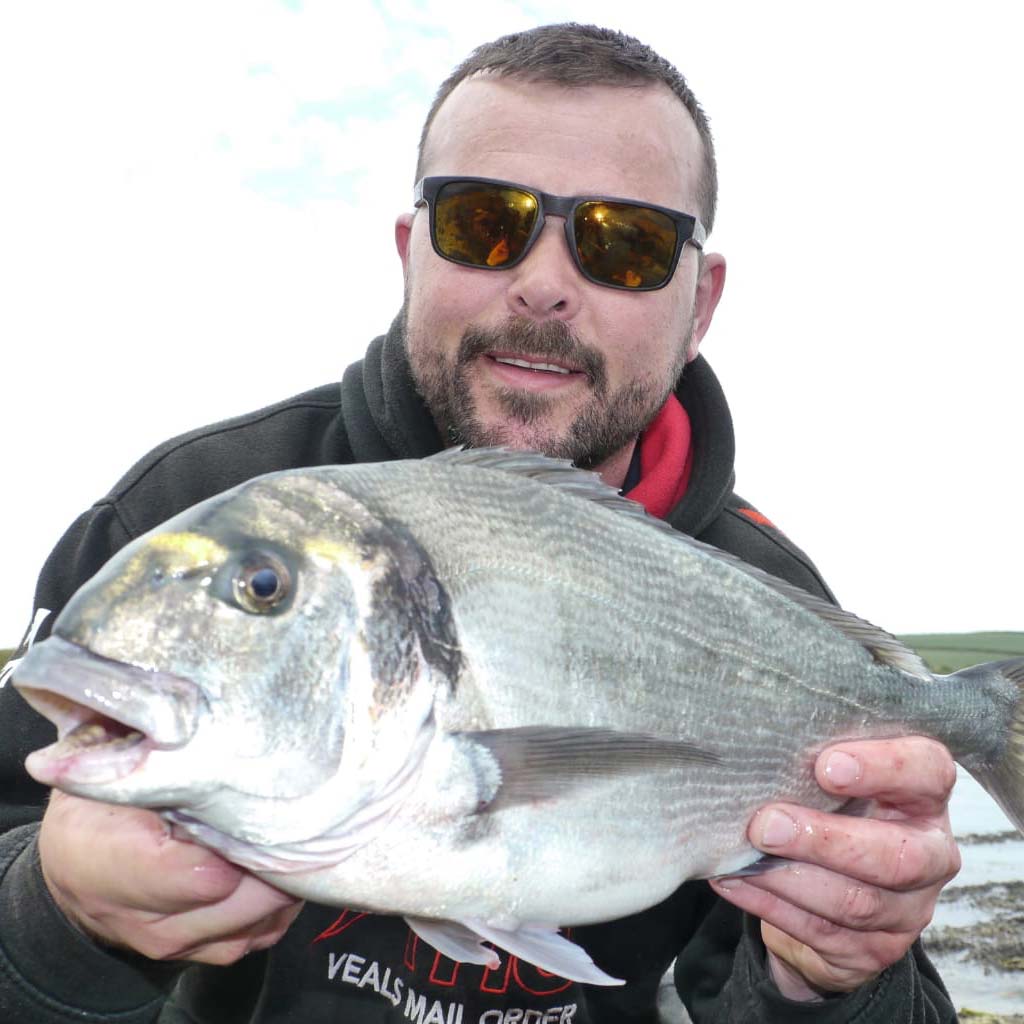 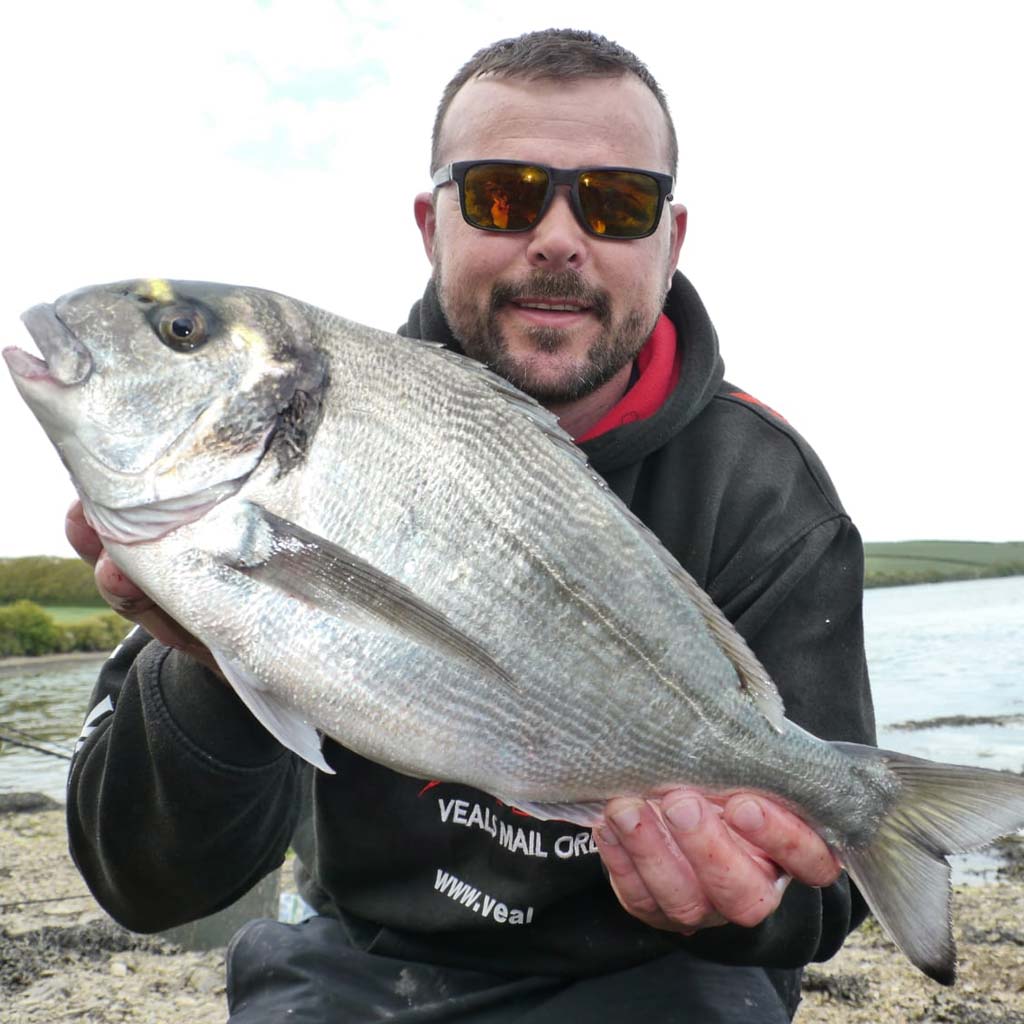 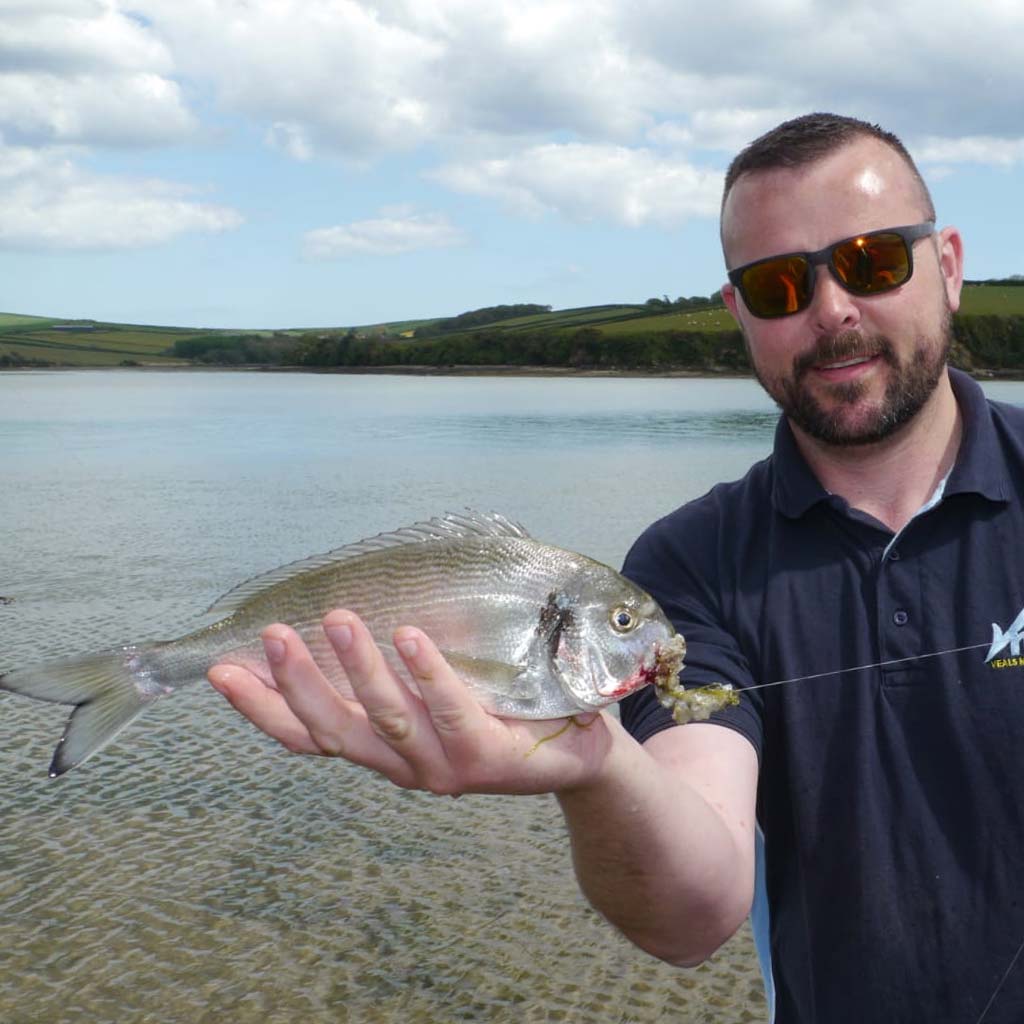 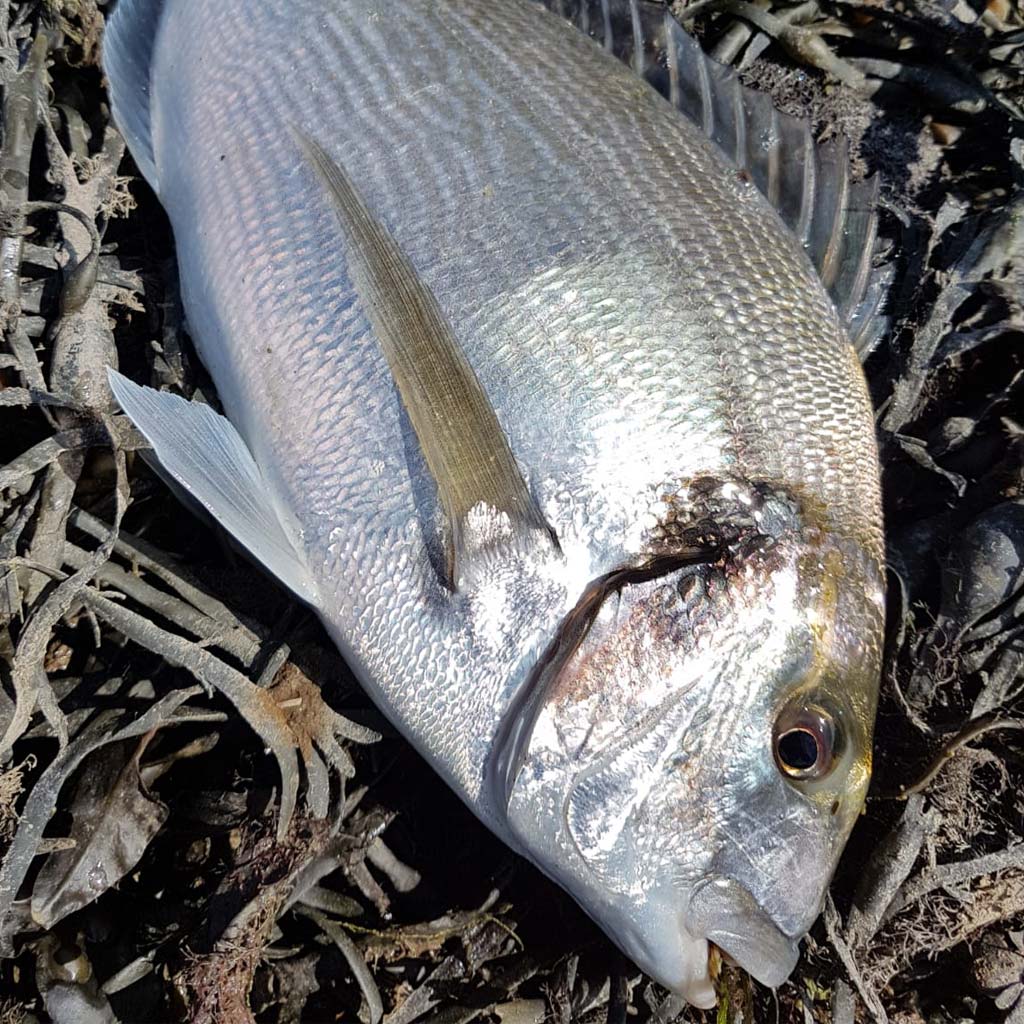 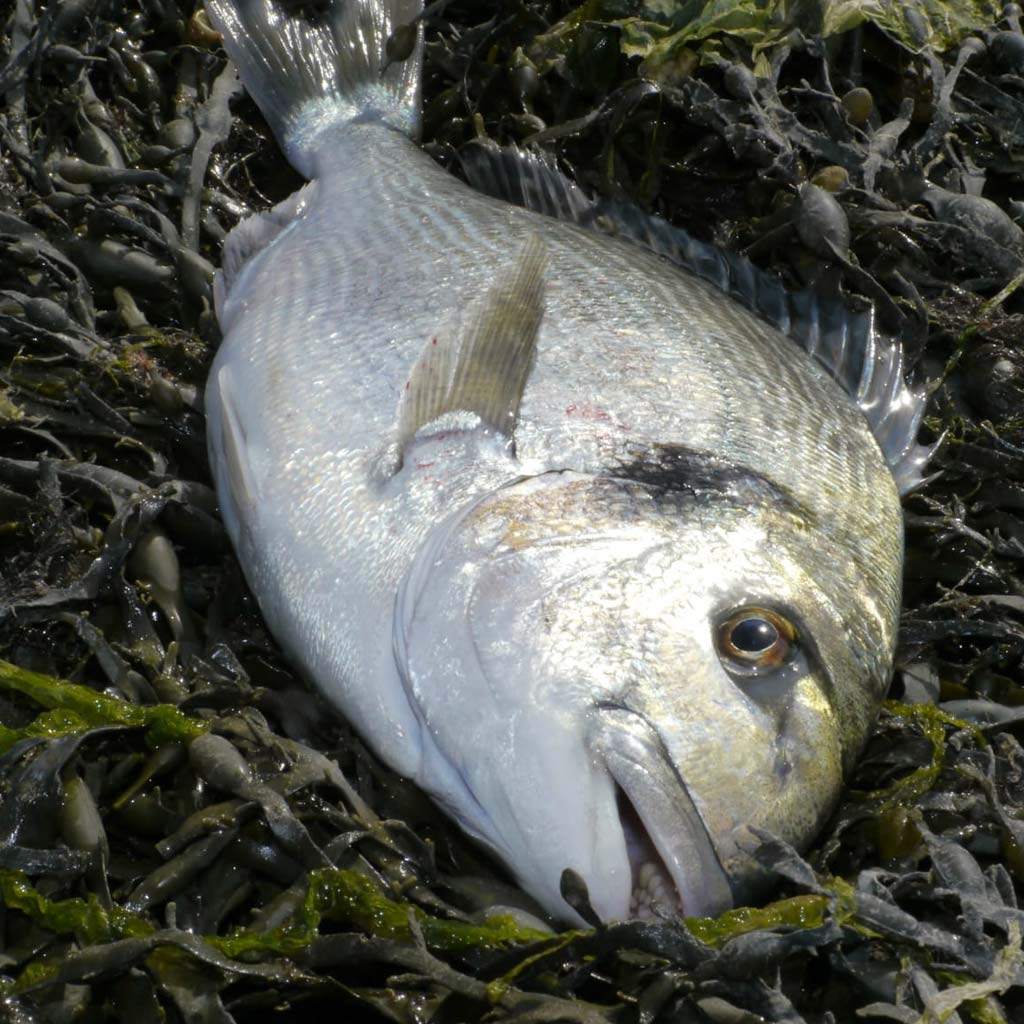 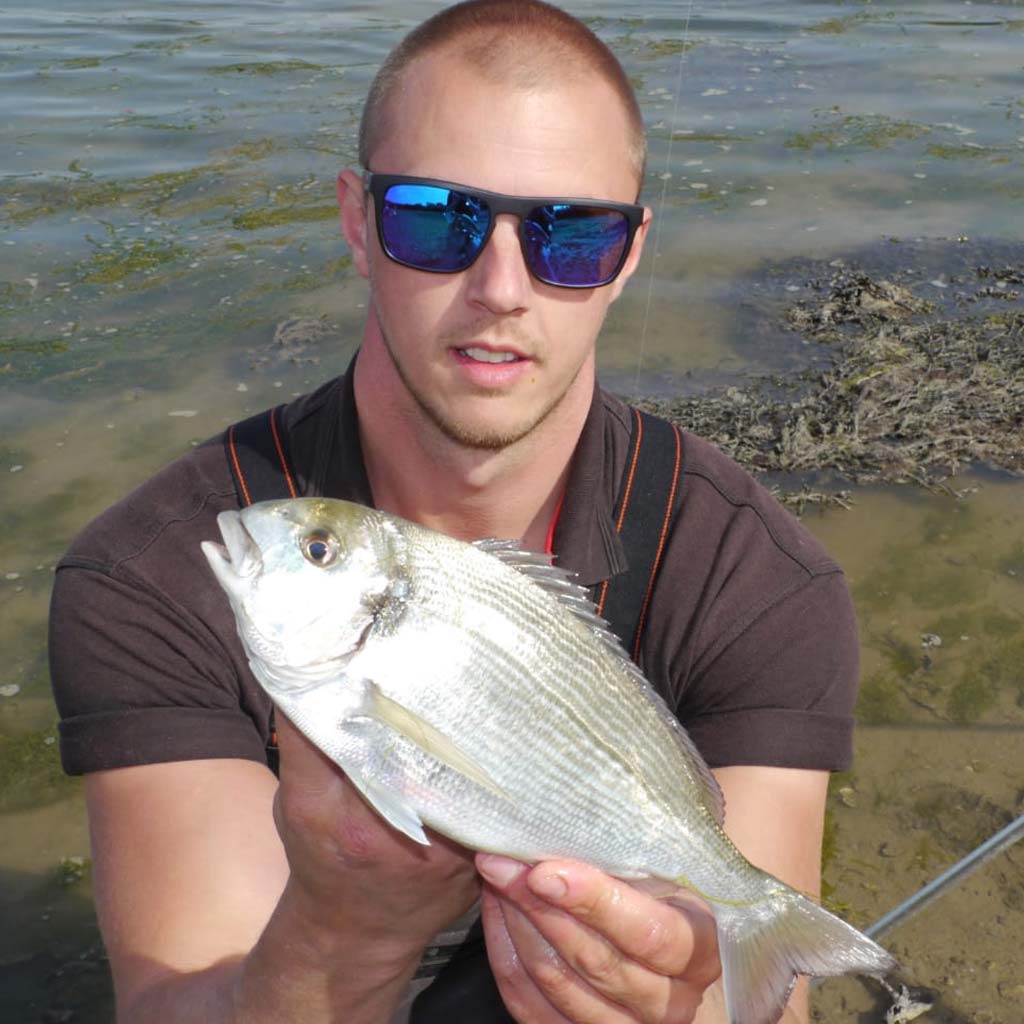