Menu
PrevPreviousGetting Hooked Up with Gruu
NextA time for changeNext 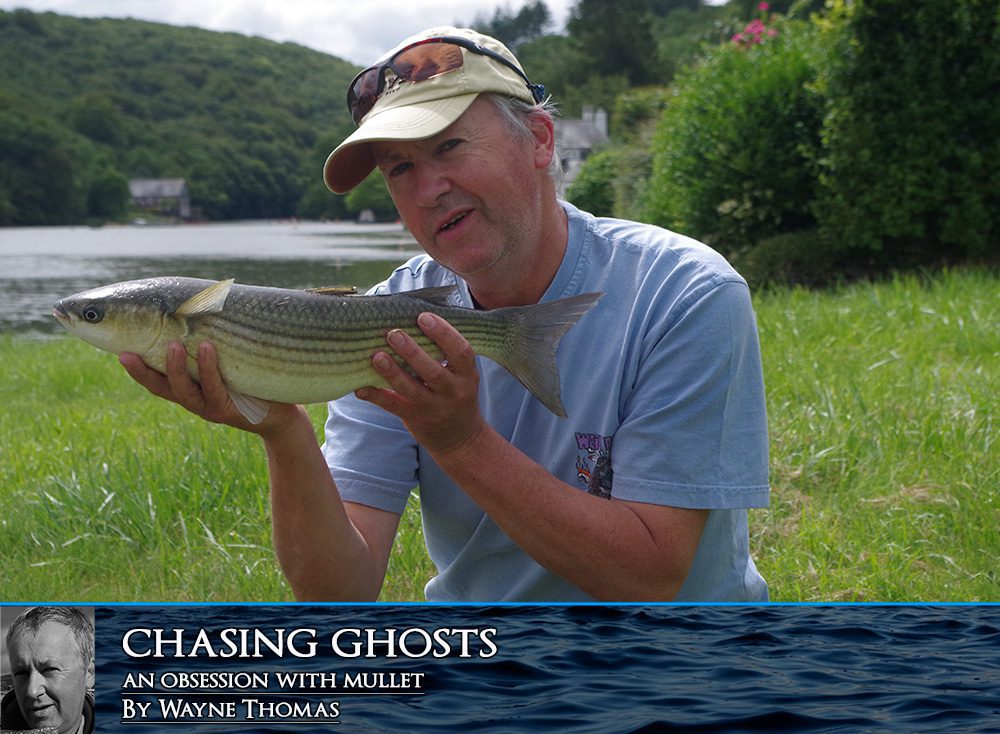 Grey mullet are amongst the most prolific of fish around the UK shoreline, they are arguably the hardest fighting sea fish size for size in UK waters and can be caught using a range of tactics. And yet they are dismissed by the vast majority of UK sea anglers. Perhaps this is as a result of their reputation for being nigh on impossible to catch.

Whilst mullet can be challenging at times, they are far from impossible to catch and can become a serious obsession once success has been tasted. My own mulleteering journey began over forty years ago as a teenager. I had been fishing for several years in both salt and freshwater when we went on our annual family holidays to Looe in Cornwall. Then, as now, grey mullet would frequent the harbour and the fish quay where they would, being opportunist creatures, feast upon the discarded waste.

My twelve foot freshwater match rod, Mitchell 300 reel matched to light float tackle and size ten hook baited with fish flesh proved highly effective with numerous mullet to over 3lb. Returning home to North Devon I read up on catching mullet and started using bread in conjunction with ground bait. Float fishing was my preferred method during these formative years with bottom fishing tactics employed more often as I learnt from a small band of local mullet enthusiasts.

Whilst I have refined my tactics slightly over the years the two basic set ups still work pretty well everywhere depending upon terrain and current etc.Thick lipped grey mullet are very opportunist and will feed upon a vast range of foodstuff, a factor that can often be utilised by anglers. These opportunities can depend upon careful observation with food sources, useful in both location of fish and choice of bait.

Twenty odd years ago many sewage outfalls discharged directly into the sea, often quite close to the shoreline. Whilst there was a health risk in fishing close to these outfalls there was also a golden opportunity to capitalise upon the mullet’s opportunist foraging. At one particular venue it was possible to wade out onto the actual sewer pipe and trot a float through the outflow. A bunch of maggots proved highly effective with multiple catches of mullet to over five pounds a regular occurrence.

The pipe outlet was accessible on large spring tides with around two hours of highly exciting and productive fishing. Playing mullet as toilet tissue fouled the line and turds floated all around was a little off putting and something I would ponder upon doing now. Fortunately, local water companies have invested in upgraded infrastructures that reduce direct discharge into the sea.

I recall another occasion fishing close to a sewer outfall on Alderney shortly after a herd of cattle had been destroyed at an abattoir. The blood was discharged to the sewer outlet where vast shoals of mullet and garfish gave great sport for the duration of our stay. Another instance of grey mullet’s opportunist feeding is on high spring tides where rotting sea weed has gathered. Maggots within the weed are dislodged by the high tide washing into the water where bass and mullet sometimes enjoy a feast.

The mullet can be caught using maggots, real or artificial, presented on Fly Fishing tackle. Thick lipped grey mullet can also be weaned onto a chosen food source, the most reliable being bread. Mashed or ground up bread is introduced either by hand, in a suspended net or within a feeder. A size eight hook is baited with a pinch of white bread flake and fished amongst the free offerings. This can be suspended beneath a float, on a two hook paternoster or in some circumstances free lined.

Bread is a very overlooked bait for sea angling and can catch a wide variety of species. On excursions to the channel Islands float-fishing with bread proved highly effective for black bream with specimens to over 4lb testing the light tackle as they dived for sanctuary amongst the kelp. Several bass have also succumbed to bread with fellow mullet anglers catching fish to over 8lb. In addition, I have caught wrasse, pollock, garfish, mackerel, gilthead, smelt and shanny using bread.

On our last trip to the Channel Islands, we had a cunning plan to ship over our breadcrumb. Twenty five loaves of Tesco value white were put through the food processor. On arrival we asked if our parcel had arrived. On the sixth day of a seven day trip, it duly arrived wrapped neatly with customs and excise tape. The crumb was by then starting to develop a rich green mould!

One reason that mullet are considered difficult to catch is that they are often visible and can be seen ignoring our baits. This undoubtedly happens far more than we think with other species, it’s just that we are unable to observe it. The coastline around the UK has a vast range of habitats where mullet can be found with harbours, estuaries and the open coast all having populations. The easiest mullet to catch are in my opinion those on the open coast. Locate mullet on the open coast, wean them onto bread and excellent sport can be enjoyed.

When float fishing, bites can be decisive with the bright tip plunging out of sight as the bread is seized. On other occasions the mullet will frustrate as they mouth the bait often removing the soft ends to leave just the hard core of the bait on the hook. When bottom fishing a quiver-tip will often tremble tantalisingly for minutes before eventually plunging over as the fish hooks itself. More often than not, the tip becomes still and the hooks are retrieved without bait!

Estuary mullet can prove very difficult to tempt with vast shoals often present and seemingly ignoring the baits altogether. This is not always the case though, as each tide seems to be different with fish feeding confidently on one tide and oblivious to baits the next. A few pointers to look out for when seeking mullet are green weed, freshwater inlets and a food source, including harbours where food waste is frequently discarded.

Grey mullet are very prone to exploitation by commercial fishing and many populations around the UK have been decimated by netting. Grey mullet are a very slow growing species, only reaching maturity after around ten years. For this reason, the majority of keen mullet anglers practice catch and release. Since those early experiences on the Cornish Coast, I have cast for mullet in many locations, including Cornwall, Hampshire, Dorset, Devon, Alderney, Sark, Ireland, Brittany and Crete. As with all fishing, the places and the people are an integral part of the enjoyment for me and I have had some great adventures whilst trying to tempt the wily mullet.

When I first started fishing for grey mullet in the 1970’s they were considered a fish of the summer months, with the season running from May until late October. In the South West of England this has certainly changed with mullet now a worthwhile target throughout the entire calendar year.

One of the largest mullet I have seen was in a rocky cove near my home village of Combe Martin. I had fished a high water mark and was packing away as the tide ebbed after catching a few mullet to around 3lb.

As I looked back into the water a very large mullet drifted into the cove. The water was crystal clear and I estimated the fish at 7lb+. I rushed to re-tackle and  flicked a fresh bait out suspended beneath my float. The mullet was nowhere to be seen for a few moments; but then I caught a glimpse of it beneath my float. The float slowly rising having being submerged! A once in a lifetime chance missed.

The margin between success and failure is often slim. My biggest mullet was tempted from a harbour in Southern Ireland. We had been fishing for several hours without success and as the tide ebbed we were running out of water. Suddenly the float dipped and I landed a good fish of just over 5lb. I recast after releasing this fish and once again the float burried. I lifted the rod, hooking a superb specimen of 6lb 15oz. I believe that the reason I caught this brace of mullet was that as the tide dropped, the mullet were forced to move away from their sanctuary beneath the harbour pontoons. As they drifted down with the tide they came upon my bait. We had spent hours casting our baits as tight to the moored boats as possible, the tails of large mullet often visible as they rested in safety.

When we fished the Channel Islands, double figure mullet were caught each season often during the winter months when they would gather in huge shoals. Local anglers would often tell of hooking mullet that headed for the horizon emptying their reels of line. Whilst we glimpsed some very large mullet, I never got spooled. I did however hook a couple of fish that took close to a hundred yards of line before the hook hold gave, but it is difficult to judge how big these fish were.

I have talked of thick lipped grey mullet in this article. I have caught a few thin lipped mullet on baited spinners from local estuaries but have not yet devoted the same time and effort as I have for thick lips. On a recent holiday to Cornwall, we glimpsed huge shoals of mullet, their flanks glittering in the surf as the waves broke giving a window into the crystal clear water.

After reading Colin Macleod’s excellent book, “Mullet on The Fly”  I cast a team of flies in expectation. After several hundred casts I began to believe that the bloody things really were uncatchable! These were undoubtedly golden greys, another species of mullet, but that’s a different story for another day.

Share
PrevPreviousGetting Hooked Up with Gruu
NextA time for changeNext