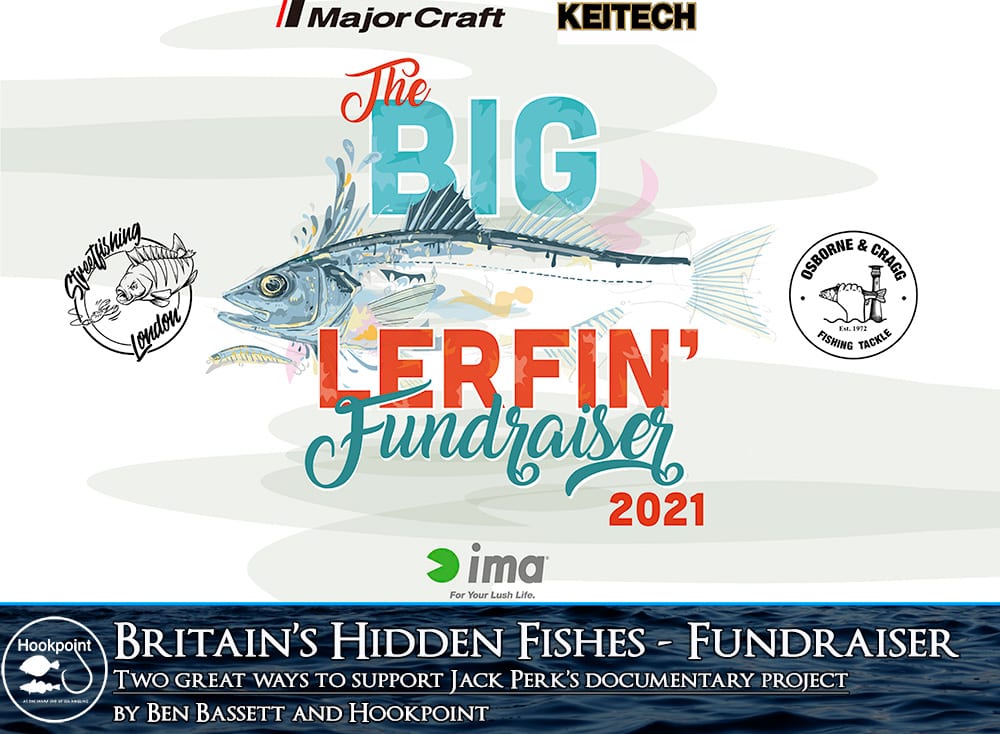 You may have heard around social media of a cinematic film in the making, focusing solely on Britain’s many species of fish, both in our freshwater and marine ecosystems. Hookpoint has become a corporate sponsor for this film, as it is our belief that in order to protect our many diverse species of fish, the wider general public first need educating on what is there to protect, so it seemed like a no brainer to lend our support.

The project is the brain child of accomplished wildlife photographer and cameraman Jack Perks, though he is far from alone, with many experienced wildlife cameramen and women, drone pilots, musical composers and even Jeremy Wade joining the project as a narrator.

In Jack’s own words, “Britain’s fish are often overlooked and under-appreciated and I think it is about time we put them in the spotlight! My name is Jack Perks and I’m a professional wildlife cameraman and photographer. Over the course of my career I’ve filmed every freshwater fish in the UK and many of the marine species, giving me a unique understanding and appreciation for our fishy denizens.

This campaign is the only option to create a short film about British fish as most TV channels won’t fund a film on brown slimy boring things. However we of course know they are so much more than that, with the ruby reds and kingfisher blues on the grayling’s dorsal fin or the deadly patience of a pike waiting for an unsuspecting shoal of rudd to pass by. We have many amazing wildlife spectacles on our doorsteps, all unfolding beneath the waterline. This film aims to showcase hidden, untold stories about British fish. It would be in the format of a short film narrated by Jeremy Wade (River Monsters) with an extraordinarily talented crew of editors, composers, consultants and camera operators.”

Whilst Hookpoint has sponsored the project, there’s still a way to go to hit the fundraising target to ensure the project goes ahead. Here’s just a few ways you can get involved and help, though do check out the Indiegogo fundraising page, for a whole host of other options.

We hand over to Ben Bassett first off, to talk about the LRF event he and a group of like minded friends are hosting to support the project.

Back in September 2020, in the absence of any real lure fishing competitions, a few like-minded anglers and I created The Big Lerf 2020. This was a country wide species hunt, without entry fees, without prizes, just an excuse to get out and fish. You can read about it in a previous Hookpoint article here…  https://hookpoint.co.uk/the-big-lerf-2020/

The response from the angling community was tremendous, with a truly incredible 44 species caught by anglers across the UK in 48 hours. All fish were caught on lures on ultralight tackle. So, when I was approached by wildlife cameraman and fish obsessive Jack Perks, to help raise money for his new project, I knew the Big Lerf would be the inspiration.

The film project, called Britain’s Hidden Fishes, is being crowd funded via the Indiegogo platform. Jack needs to reach £30,000 to get the film made, so I was asked if I could come up with one way to raise money for this exciting homegrown project. My fundraiser for the project is, of course, a species hunt.

The event will take place on 3rd July in Weymouth, with everyone meeting at 9am and finishing at 6pm. There will be prizes for most species, biggest fish, most species on hard plastic/metal lures and coolest/most exciting catch. The entry cost is £20 and you enter by visiting the Britain’s Hidden Fishes Indiegogo page, selecting the ‘Blenny’ option and simply giving a few details. There has already been huge interest in the event from experienced LRF heads, lure fishing nuts and complete novices. The fact that all restrictions should be lifted by then means this will be also be a great social and a chance to meet anglers from all across the country.

So this is my ‘call to arms’ to you, the reader. I’m asking you to get involved – either by buying a ticket and joining us on a big social species hunt in Weymouth, or by just donating/buying a perk on the fundraising page. We have a chance to all play a part in a celebration of Britain’s incredible diversity of fish species. That is such a worthwhile cause. Thank you so much for reading, and I hope to see you in Weymouth on Saturday 3rd July.

If LRF really isn’t your thing, at the other end of the fishing spectrum is getting afloat and fishing a wreck for some big conger, ling and pollock. So if this floats your boat a little more, you’ll be pleased to know Hookpoint have teamed up with The Fish Locker to host a fundraising auction for a spot aboard Anglo Dawn out of Falmouth on just such a trip.

There are four spaces, for a trip on 02 October 2021, with an auction running for 4 spaces. You can find our auction running here – https://www.jumblebee.co.uk/britainshiddenfishes

You will not just be bidding for a spot aboard the boat, but also the opportunity to fish alongside John Locker of The Fish Locker. Even better, you’ll feature in one of The Fish Locker’s videos, to be hosted on either their YouTube or Facebook Watch video platforms.

Hookpoint will be aboard the boat too, ensuring you have all the professional photos necessary to properly remember the day. In addition, there will also be a Hookpoint feature done on the trip, and you’ll have the opportunity to be on the cover of a following issue of Hookpoint.

Most importantly, by bidding for one of the spots, you’ll be supporting the funding of a critical documentary that will bring awareness of the many species of fish in our waters to a much wider audience. In turn, such awareness will help support the protection of these fish long into the future.

Do remember to check out the Indidgogo fundraising page here – for more details on how you can support, by purchasing one of many events or making a donation, which all helps no matter how big or small.

Another way to back the project (there’s absolutely loads of options on the Indigogo page) is through a guided trip with Richard Widdowson’s ‘Poole Bay Guiding’.

If you want a little bit of insight into what this would entail, just check out the ridiculously diverse range of fish he references in his feature in our prior issue here.

Richard won a species and specimen competition we helped run last year, with a quite ridiculous tally of over 50 species in the calendar year. A rather interrupted year too, often recording over 30 species in months where fishing was able to take place.

Whether you want to learn a bit about the diversity of the coastline around the Poole area, target a specific species, try for some new species or go for as many species over a day as you can, Richard will be able to tailor the package for you accordingly. It’s recommended at any time, but especially when raising money for such a project.