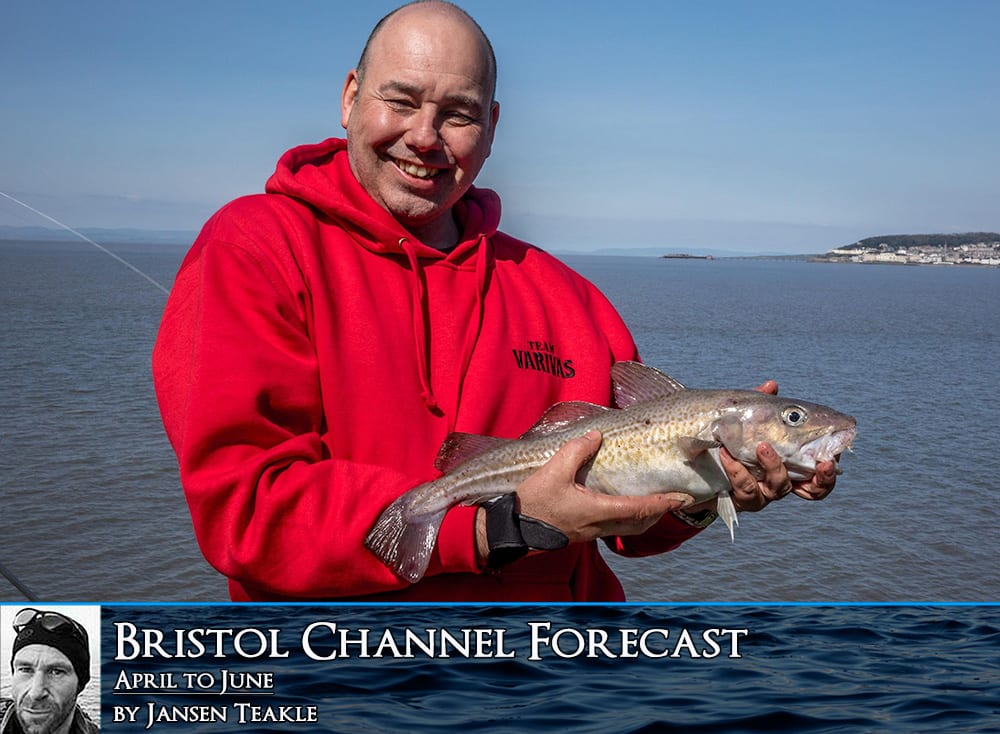 If you cast your mind back to the January edition you’ll recall my Bristol Channel fishing forecast for the first quarter of 2021. Hopefully it has proved accurate for those of you who have been fortunate enough to live within a short distance of the coast, have been able to fish and it’s assisted you with finding a few fish. The one surprise that I hadn’t accounted for (this is fishing after all and it has and always will throw us a few curve balls) is the early influx of a very healthy number of bass that appear to have moved inshore since the middle of February.

This is around a month earlier than usual and quite a turn up for the books given that February is generally regarded as the quietest month of the year in the Bristol Channel. This early arrival is most welcome and it does make you wonder how this bodes for a little later on in the year.

Here are my predictions for the second quarter of 2021, when going on current government decisions, we should have broader access to the coastline once again.

April can be a fantastic time to fish as the clocks have gone forward, the days grow longer and the weather begins to warm up in general. Day time temperatures in the mid teens are very realistic and with the subsequent rise in water temperature comes the awakening of an abundance of food stuffs. Crabs in particular begin their spring moult and it’s little wonder that this is the number one bait for a number of species here. Rock marks are highly likely to still contain a few codling and these will be feeding readily on crustacea.

On the right marks, these fish can blow the whole concept of long distance casting, that has long been associated with cod fishing, out of the window. Short casts with light tackle can provide some frantic sport on marks such as Sandpoint and Brean Down. Bass fishing in the upper Bristol Channel would usually be a very worthy pursuit around this time, so it goes without saying that mixed bags are possible on this lighter tackle at surprisingly short range. If yomping out on to any of the rocky stratas found here is not your thing, any small estuary or creek is also worth trying with this lighter tackle. It’s a truly exhilarating approach and one that should be tried at least once.

The west Somerset reef marks that give way to mud and broken ground will hold large number of thornback rays this month with a double figure fish always a possibility. Conger and dogfish will add to the variety on these rougher marks whilst the cleaner beaches of Weston, Brean and Berrow will offer all of the above with the addition of flounders, eels and the chance of small sole.

It’s worth remembering that these beaches are popular with holidaymakers and as such are best avoided during the daytime. Evening high water sessions are best and as a general rule of thumb, tides of around 10.5 to 11.5m on the Weston-super-Mare scale present the best all-round angling opportunities.

May is undoubtedly the start of the ray fishing in the clearer waters associated with those marks west of Minehead. Surveying these marks prior to fishing is highly recommended as winter storms change the landscape here year on year, with thousands of tonnes of sand moved around by the tide creating bars where there were once none and clearing some areas of sand altogether. There are three species of ray to regularly be found here; namely the small eyed, spotted and blonde, though in recent times even the thornback has become a more common capture here. Sand eel or launce baits are favourite and it’s advisable to stock up the freezer now, ahead of the rush.

Good quality mackerel is a superb back up bait and I often wonder if it is neglected because it doesn’t lend itself to long distance casting in the same way as a naturally streamlined eel. Successful Ray fishing relies on a lack of dogfish and it is those that will spoil a days fishing if they intercept every bait just minutes after it touches the sea bed. Thankfully, or sadly, depending on your perspective, dogfish numbers have been noticeably down over the last few months and are conspicuous by their absence. Pulley rigs or drop down pulley rigs will score here.

Meanwhile, the upper channel bass fishing will be in full swing for numbers of fish. If crab isn’t available, locally dug blow lugworm are a great back up and if fished on small hooks over clean ground will also account for flounders and probably even the remainder of small codling.

June is undoubtedly the time to try and catch a big smoothhound in the channel. The first influx of fish is often the largest and a twenty pound specimen is not out of the question. Providing salinity levels remain high and we lack excessive rain fall, the fish should be there for the taking at any marks between Hinkley and Clevedon that offer tidal flow and broken ground. Low water is undoubtedly the best time to try for these hard fighting sharks and again, crab is the only bait you will need. If you did read my previous January to March forecast, chances are you have been stock piling frozen crab by now. If not, you may struggle to get it at short notice when you discover that the fish have arrived. Big hooks aren’t necessary, small, sharp and strong is the way to go with my personal choice being the 3/0 Varivas Chinu. Half a large crab or a whole small one is ample and you’ll gain nothing by piling two or three big crabs on to one cast. Don’t forget to take a weigh sling of sorts, be it a shop bought example tailor made for the job or a supermarket bag for life, there’s no excuse to be weighing these fish unsupported.

All of the mid channel rock marks that offer mud within casting range will offer thornback rays, mostly small males averaging around five pound in weight and often a lot smaller. They will readily take fish and worm baits but when the conditions allow, lighter tackle adds some fun to this species that gets a bad rap locally, solely because of its population boom and its ability to steal those baits laid out for what might be considered, by some, more worthy species.

The chance of a slightly bigger sole adds to the variety on the cleaner marks, though it will be two or three months from now that a really big fish is on the cards.

It’s worth noting that sporadic mackerel fishing on the south coast traditionally begins in June and if there are reports of fish showing, it’s worth making hay while the sun shines and making the effort to do a ‘bait run’. Frozen mackerel is a highly effective bait for the larger species found further down the channel and by planning ahead, you’ll be able to secure enough bait to carry out your winter campaign. Those lower channel marks beyond Somerset and on in to Devon will offer limited opportunities at this time as lobster pots make tackling the majority of the marks tricky at best. This will remain the case until October, depending on the weather.

Lure fishing for bass has become increasingly popular over the last decade and has acquired a dedicated following during recent times. Clear water and early mornings seem to be key with soft plastic lures bumped across shallow ground seemingly the key to success. Water clarity does play a huge part in this style of fishing, so checking the surf forecasts as well as the regular weather forecast is essential to save a wasted journey.

If you require a more hands-on experience, practical advise or would like to get some first hand knowledge on any of the marks found here on the Bristol Channel, I do of course offer a fully insured guiding service where you are welcome to take full advantage of my personal experiences of fishing here.