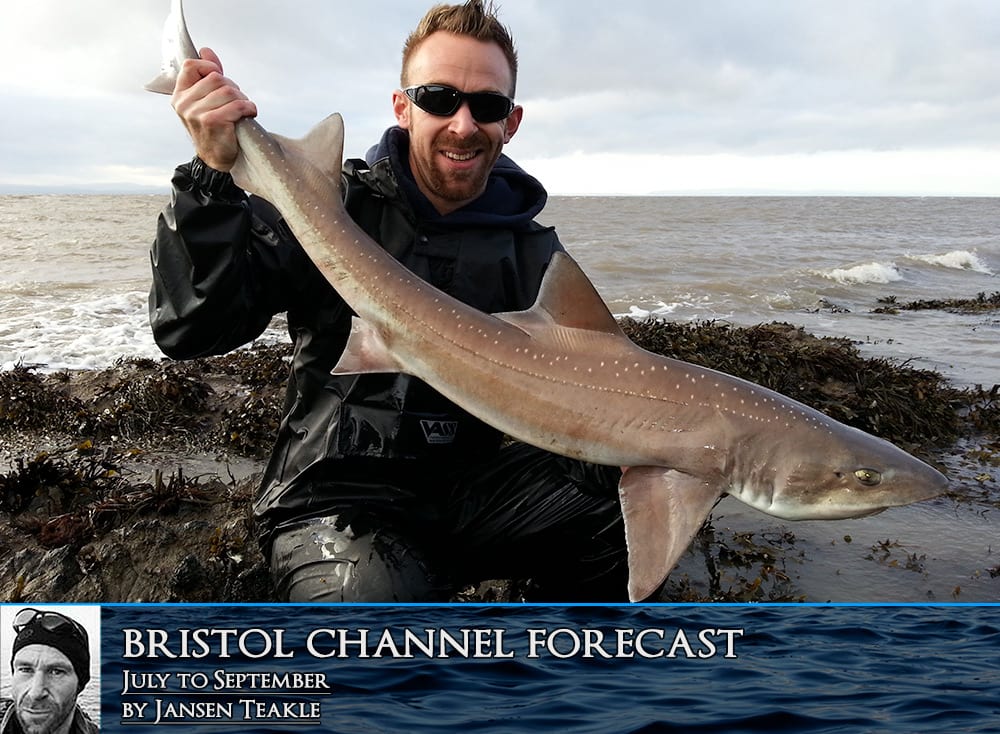 Jansen Teakle continues his in-depth quarterly fishing forecast for the coming months, down on the shores of the Bristol Channel. Read on to find out just what might be on the cards for you this summer.

If the weather remains settled, the smoothhound fishing will be in full swing the entire length of the Channel between Porlock and Clevedon. The fishing in the upper reaches will be determined by how much or how little rain falls. Salinity in the upper reaches is a key factor and if the heavens open for days on end, the fish will scarper. The larger fish usually show from the low water marks around Weston-super-Mare and there is a good chance of a twenty pound plus fish putting in an appearance. Locating the bigger hounds at these marks can take some doing as they tend to move around. A good catch on any particular day is seldom replicated on the following day. Other marks worth trying for a larger specimen will be any of the reef marks from Hinkley point to Blue Anchor. Crab baits at range will account for these quality fish.

By-catch will consist of conger eels and what will predominantly be small male thornback rays. It’s notable that if the smoothhounds are absent, these other fish will make up catches as they are able to get to the baits first. Their very presence will reveal the smooth hound’s absence.

Numbers of dogfish in the lower reaches of the Bristol Channel will begin to thin out, meaning that those anglers fishing the sandy low water venues for small eyed, spotted and blonde rays around Minehead will stand a better chance of the target species locating their baits. Thornback rays will be the dominant species on most mid to upper Channel venues throughout July, with broken ground giving way to mud offering the perfect habitat for numbers of these now common fish. Squid and bluey baits are all that is needed for a cheap fishing fix that could see you land a dozen or more rays in a single tide. Scaling the end tackle down will account for smaller species such as sole and bass on the high water beaches south of Weston-super-Mare. Locally dug lugworm will be the the bait of choice for these. As numbers of holiday makers start to increase and the beaches see an influx of daytime activity, it’s really only practical to fish either an early morning or late evening tide to avoid other water users.

This will be the month when serious sole anglers turn their attentions towards this unique species, with fish of over three pound in weight possible from a number of high and low water marks around Clevedon.

Short to medium range casting on to mud, coral and clay will stand you in good stead, but good quality dug ragworm is the key to success. Don’t fish with too small a hook though. Large ragworm baits fished on 1/0 hooks is the tried and tested formula for many locals. A pennel rigged bait will also increase your chances of hooking this species which is notoriously finicky when feeding and is known for it’s ability to suck a bait in, only for it to be rejected, turning the hook back up on the trace line in the process. If you decide to fish for sole, marks around Clevedon have good past form, but be prepared to really commit and put the hours in. By catch can become frustrating and when good quality ragworm is fetching silly prices, it can become costly too.

Smoothhounds will continue to show in many areas, as will small congers and thornbacks.

August can often start well and slow up as the month progresses. If February is generally considered a poor month in many regions, I would suggest that August fishing in the Bristol Channel could almost be held in the same poor regard. There will be fish to catch, but numbers will definitely be down and you may have to endure a few more blank sessions.

If the weather is warm and settled, the marks around the lower Bristol Channel could produce species such as mackerel, scad, garfish and pollack. These sight feeders can only be successfully targeted when the water is clear, with marks west of, and including Porlock capable of offering these species that many will only associate with the south coast. Early morning lure fishing for bass can also be productive, but aim to be on the shoreline just as day is breaking. Coincide your visit with a flooding tide and you could be in for some enjoyable sport. As with lure fishing on the whole, travelling light and covering as much ground as possible will be the way to go. Soft plastic lures bounced through the shallows has become a popular and successful tactic in recent times.

One of my favourite months of the year for all round fishing potential, as the summer species peak and the water temperature does too, September offers some solid fishing. Ray numbers in the upper reaches will be high and there will be some quality fish found just yards from the shoreline as they move in to the shallows to feast upon the shrimps that will be plentiful. Numbers of bass will increase not only on the open coast but also within the numerous estuaries and back-waters found here. There will be the chance of a specimen size fish for anyone willing to dedicate some serious hours and will not be deterred by small conger taking baits intended for the species. Sole numbers will be up around the middle reaches, with the clean ground high water venues below Weston-super-Mare offering a good number of smaller fish, with a few larger examples thrown in. Owing to their general size, these smaller fish can be targeted with regular sole fishing hooks of around a size #4. Locally dug lugworm will tempt fish and it’s often possible to catch sole extremely close to the shore and when the shock leader knot is still visible above the water’s surface.

Smoothhound fishing will continue to be prolific, though numbers will start to thin out as the month goes on. As the evenings begin to draw in, there will be the chance of some bigger conger eels moving in to the shallows to feed on pin whiting that will be chasing shrimps. Use a sprat to catch a mackerel, is how the old saying goes, but in this case, target those pin whiting with small hooks baited with lugworm and use them fresh as a highly effective conger bait. A wire trace is advisable as some very large eels could be out there. Modern wire is extremely supple and the multi-strand variants are perfect for tying a short biting trace that will form the business end of your tackle.

Large bass will show from many north Devon marks with large mackerel baits fished at close range the way to find them. The onset of darkness or first light will increase your chances dramatically. If you fancy attempting something really different, both bream and triggerfish move inshore around the end of the month at those marks found west of Porlock. Broken ground and depth of water are required and it can be difficult, yet rewarding, fishing. These same marks will hold both bull huss and conger after dark, but step your end tackle right up if you want to have any chance of landing a rogue tope that has every chance of making an appearance here too.