In the last few years, it’s been widely established that Atlantic bluefin tuna are back in a big way in British waters. What could be a truly world class big game fishery, however, is currently roadblocked by regulations forbidding anglers to target the fish. Although there have been many incidental captures reported by anglers fishing for other large species, at present, anybody intentionally going to sea to target bluefins for sport risks the wrath of the Marine Management Organisation. Commercial exploitation of the species is also currently prohibited.

Until the UK’s recent exit from the European Union, there was little short-term opportunity to change this situation. One man’s vision, however, is to make sure that the UK secures the rights to allow sport fishing for bluefins by the end of the year. Steve Murphy is the brains behind the Bluefin Tuna UK campaign. A keen and experienced big game angler, unlike many that become involved in the machinery of fisheries politics, Steve has no commercial background and his interests lie solely in sport fishing.

The campaign’s roots extend back to 2016 when Steve was contacted by a friend with the news that a large number of bluefin tuna had appeared in Falmouth Bay, South Cornwall. Steve travelled down at the first opportunity and on his first morning afloat, ‘Saw some things that I thought I’d never ever see in UK waters: oil slicks from bait being smashed and huge bluefins busting out all over the place.’

At the time, Steve wrote this experience off as a fluke but 2017 saw the tuna reappear. He began to research more widely and found that bluefins had also, ‘Reappeared around Ireland, we were getting reports from the Celtic Deeps, from Scotland and some guys in Scandinavia were emailing me saying that they had fish there too.’ Steve recognised that, ‘This could be a pretty significant recreational fishery and nobody was doing anything about it in terms of campaigning.’

Like all commercially valuable species, Atlantic bluefin tuna are subject to quotas governing allowable catch. This is portioned out by the International Commission for the Conservation of Atlantic Tunas (ICCAT), an intergovernmental organisation established in 1966. ICCAT has long suffered from a poor reputation for enabling overfishing but more recently has been using a more science-based approach and affording more effective protection. As an EU member state, the UK currently has no bluefin quota, with the rights going to other countries with established fisheries for them. To have even a strict catch and release fishery, however, the UK would need at least a small amount of quota to account for post-capture mortality (which has been repeatedly evidenced as 5% or less in well-managed bluefin fisheries). With the UK becoming a sovereign state once more, the country is eligible to apply to ICCAT for its own quota.

Steve’s research into the Canadian bluefin catch and release fishery (as well as other non-bluefin sport fisheries) revealed that a well-managed live release fishery would only need a relatively small quota allowance to yield a lot of angling opportunity in terms of fish caught. Not only this but the economic value of a sport fishery would be up to six times greater per tonne than a commercial one, while creating new opportunities and attracting angling tourism to depressed coastal communities. Steve also consulted with a number of charter skippers to get a broader idea of what they would like the fishery to look like within the likely legal constraints. 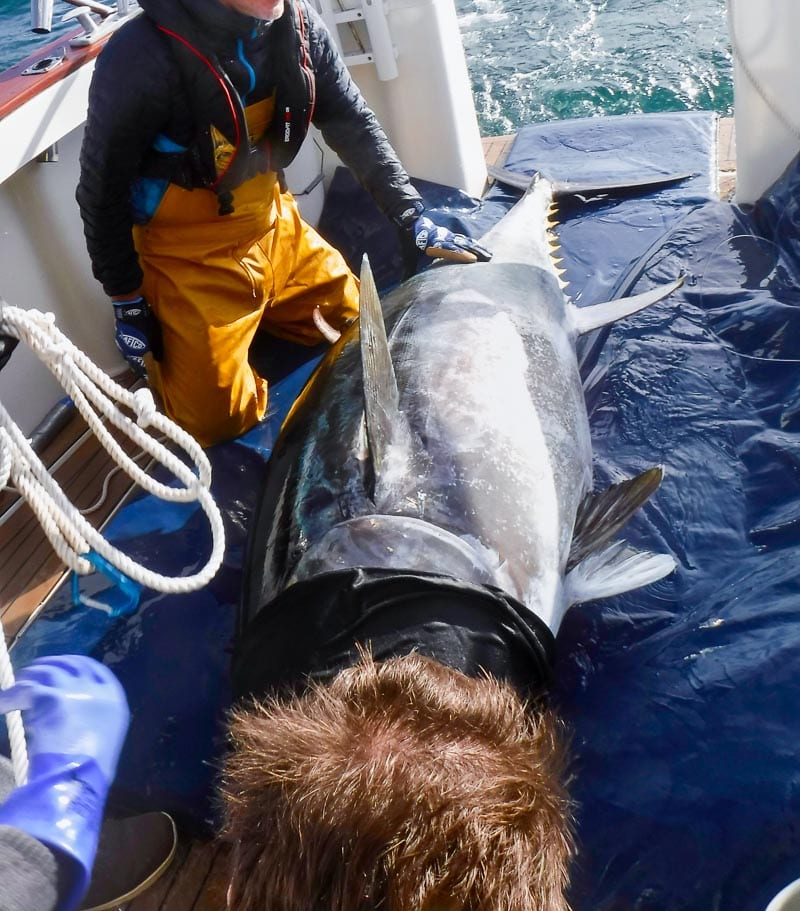 With his vision taking shape, Steve realised that he would need some political clout to make sure his message reached the right ears and so in 2018 he partnered with the Angling Trust. The campaign launched formerly with a meeting at Westminster in October 2018, where Steve and representatives of the AT discussed the issue with supportive MPs. Since then, the campaign has met with the Fisheries Minister twice to discuss the issue. Steve credits the Angling Trust for the opportunity to bring his message to the decision makers saying, ‘This is what they really bring to the table, this access to the political structure. If I’d just called a government official asking to meet with them to talk about the campaign I wouldn’t have gotten very far, whereas the government can’t refuse meetings with the AT.’

As well as reaching out to the political establishment, the campaign also began to engage with Thunnus UK, a DEFRA-funded research program created to gain a baseline understanding of bluefin tuna in UK waters and inform future management strategy post-Brexit.

To understand bluefin movements, the program has been catching, satellite tagging and releasing tuna since 2018. Initially, the program focused only on the established South Cornwall hotspot but with input from the Bluefin Tuna UK campaign, the range of the tagging project has now been expanded to Wales and Scotland.

Seeing that the Thunnus UK program was likely to struggle gathering enough experienced manpower to meet their tagging targets, Steve was able to successfully present a case for recruiting experienced recreational anglers into the program to help catch the fish. In this way, the tagging protocol expanded to allow a limited number of anglers to accompany the research boats aboard approved ‘support vessels’. Once a tuna was fought to the side, it would be transferred to the research vessel to be tagged. You can see this process taking place on an excerpt from a ‘The One Show’ episode here:

Establishing a precedent for recreational anglers and fisheries scientists working together has undoubtedly strengthened the case for a sport fishery. By Steve’s reckoning, the UK only needs a fraction of the quota allocated to bluefins (20 tonnes against the current global quota of 38,000 tonnes) to allow sport fishing for them in all the regions of the UK they currently frequent. This would take place from licensed vessels observing best practice for minimising mortality. Steve acknowledges that some anglers have expressed concern that the fishery will be open only to those fishing from licensed vessels but states, ‘There’s not a single country that’s a member of ICCAT that operates a bluefin fishery without licensing. The governing body’s requirements are that you have to license the vessels and you have to report catches and monitor processes. These aren’t EU rules or UK rules, these regulations come from the global governing body that has 75 countries signed up to an international treaty so you can’t just do what you want.’

The Bluefin Tuna UK campaign has faced other opposition also, specifically from staunch conservationists who argue that the Atlantic bluefin’s ‘endangered’ status on the IUCN red list (which originates from 2011 data) means that the species shouldn’t be subject to any angling pressure. Steve counters with, ‘Since the low point of 2010, we know that Atlantic bluefin stocks have recovered to around 50-80% of what they were 30 years ago. That “endangered” term for the global stock is out of date, it’s inaccurate and it’s misleading. There are two stocks of Atlantic bluefins, one in the West Atlantic and one in the East Atlantic, with the stock on this side of the ocean comprising over 90% of the global population. In 2015, the IUCN assessed this stock and found that not only was it no longer “endangered”, it ranked two notches better at “near threatened”. The report also stated that more reliable data for the previous two years might have led to an even better rating of “least concern”’. 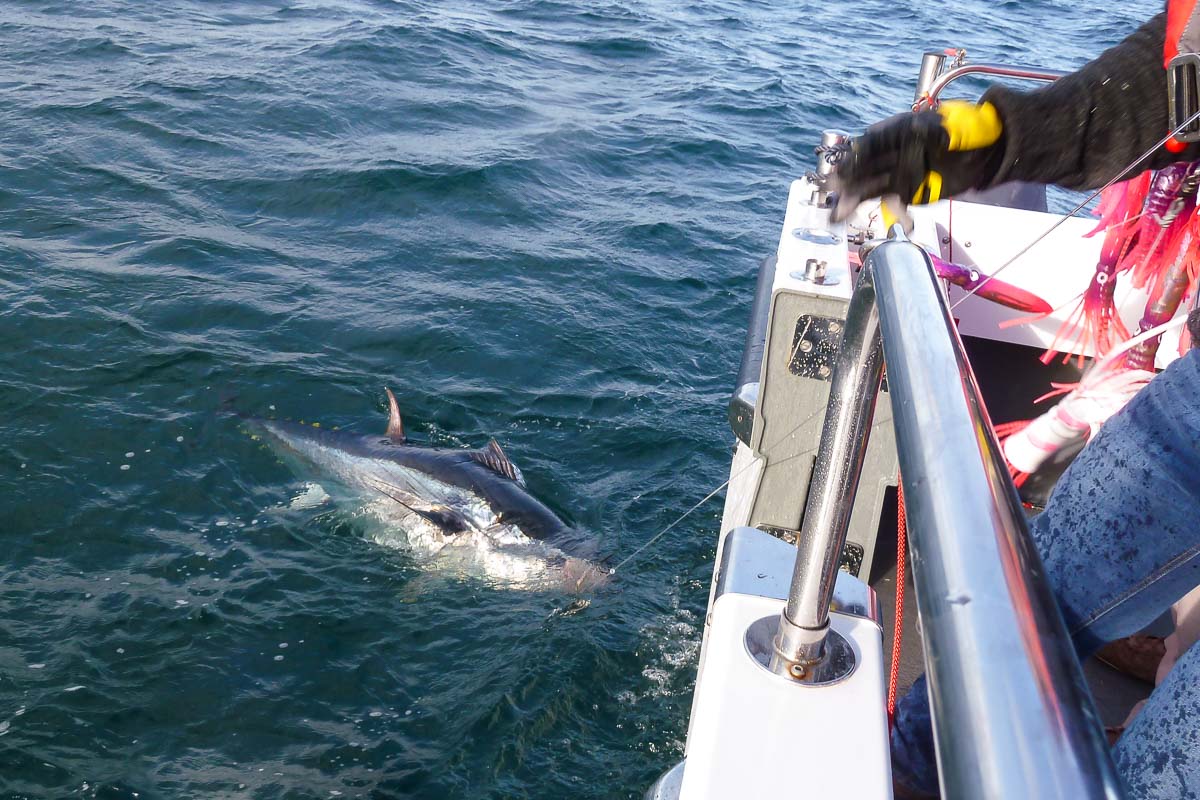 Looking to the future, Steve says that the campaign’s next big opportunity will come in November of this year, when ICCAT convenes to discuss stock and quota. Such meetings take place only once every three years, so it is critical that the UK is represented as a sovereign member and makes its case for a share of the quota at this one. Once the UK secures a quota, it will be up to the government how to allocate it but Steve and many others will be hoping that there is enough political support to make a recreational sport fishery a reality. In the meantime, Bluefin Tuna UK will focus on pushing for a wider, more-inclusive tagging program for the summer and autumn of 2020.

If things do eventually go in recreational anglers’ favour, Steve is very excited about the future, ‘It’s no exaggeration to say that what we have in the south west right now is genuinely one of the top three or four Atlantic bluefin tuna fisheries in the world. The size of the fish is ideal: they are not so big so that you need fighting chairs and superhuman anglers aboard but, averaging around 350-400lbs, they are big enough to be a real challenge using stand up gear. The season is also very long. In places like the Canaries, the fish may be around for only 6-8 weeks, in the south west they are present from July through until November. Bluefins are a top two or three bucket list fish for most people. It’s truly an amazing opportunity to create new world class big game fishing destinations here in the UK’. 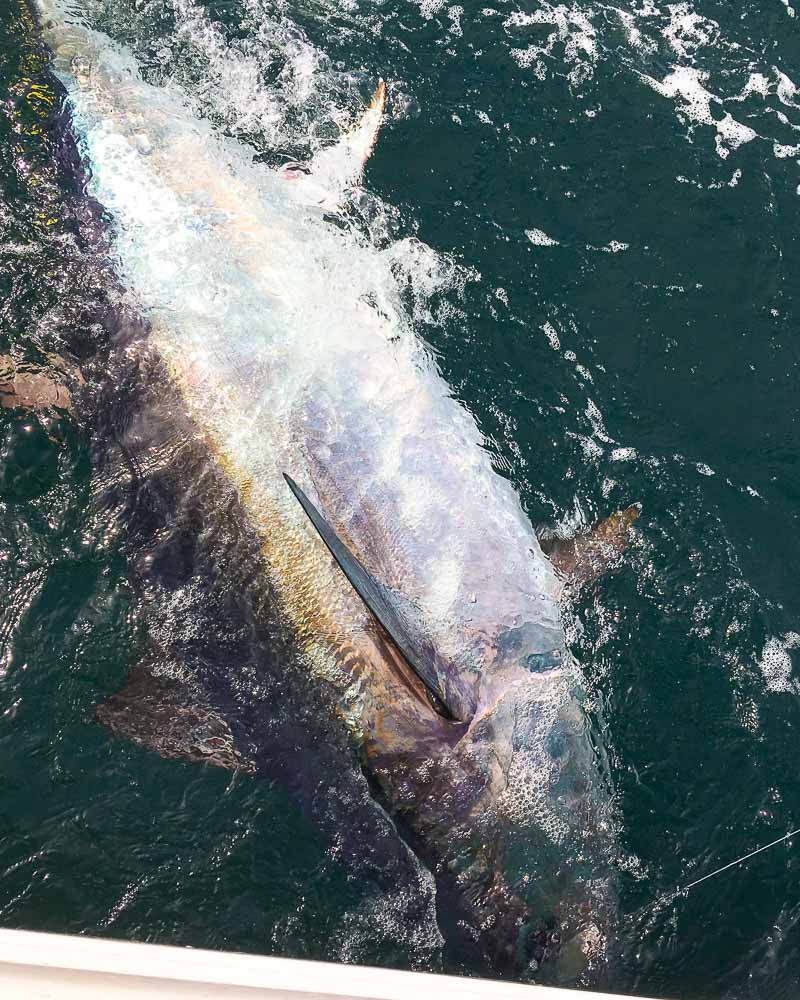 More information about the Bluefin Tuna UK campaign and bluefin tuna in UK waters can be found on their dedicated Facebook page below, or at the following: 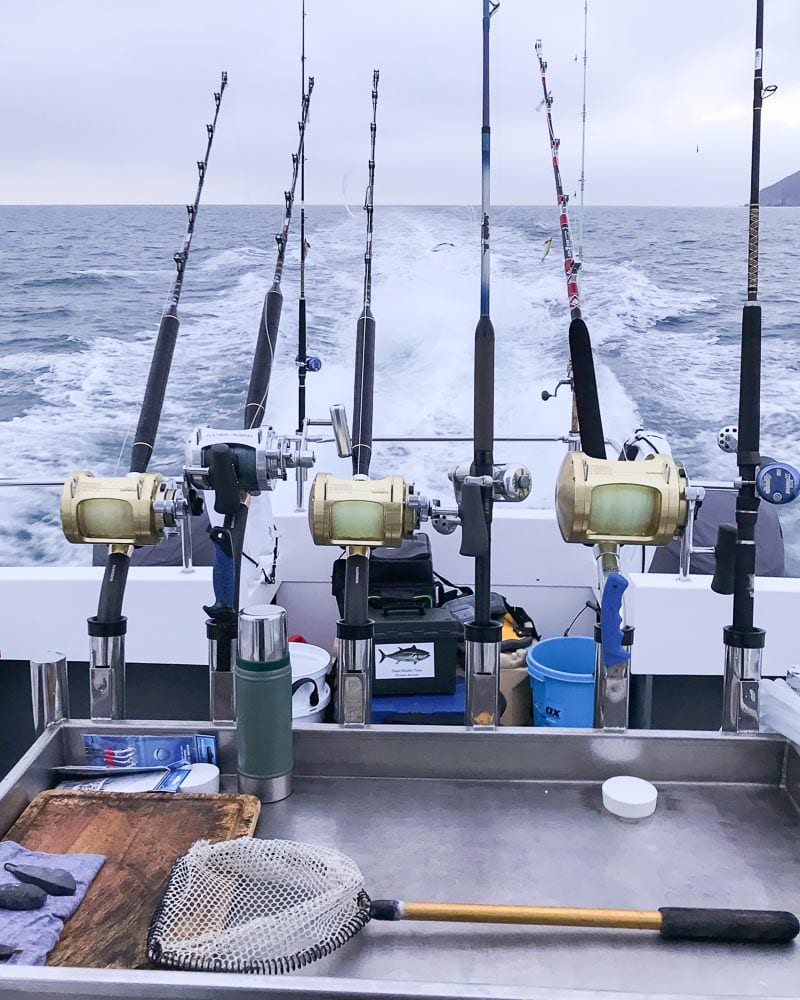 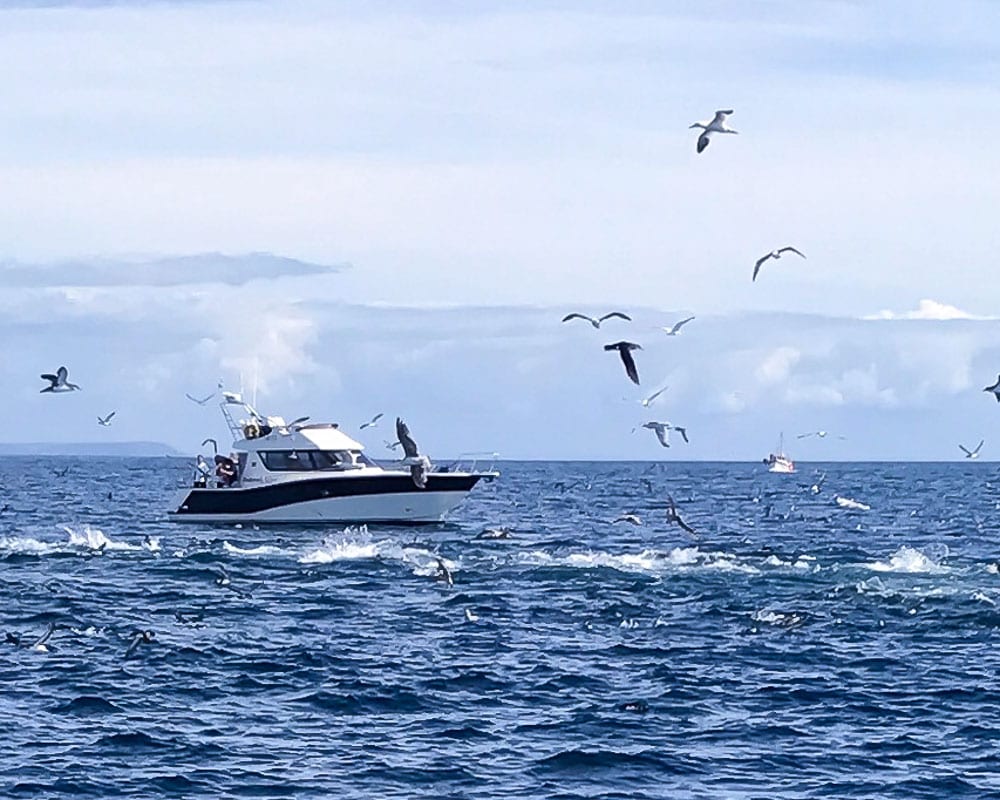