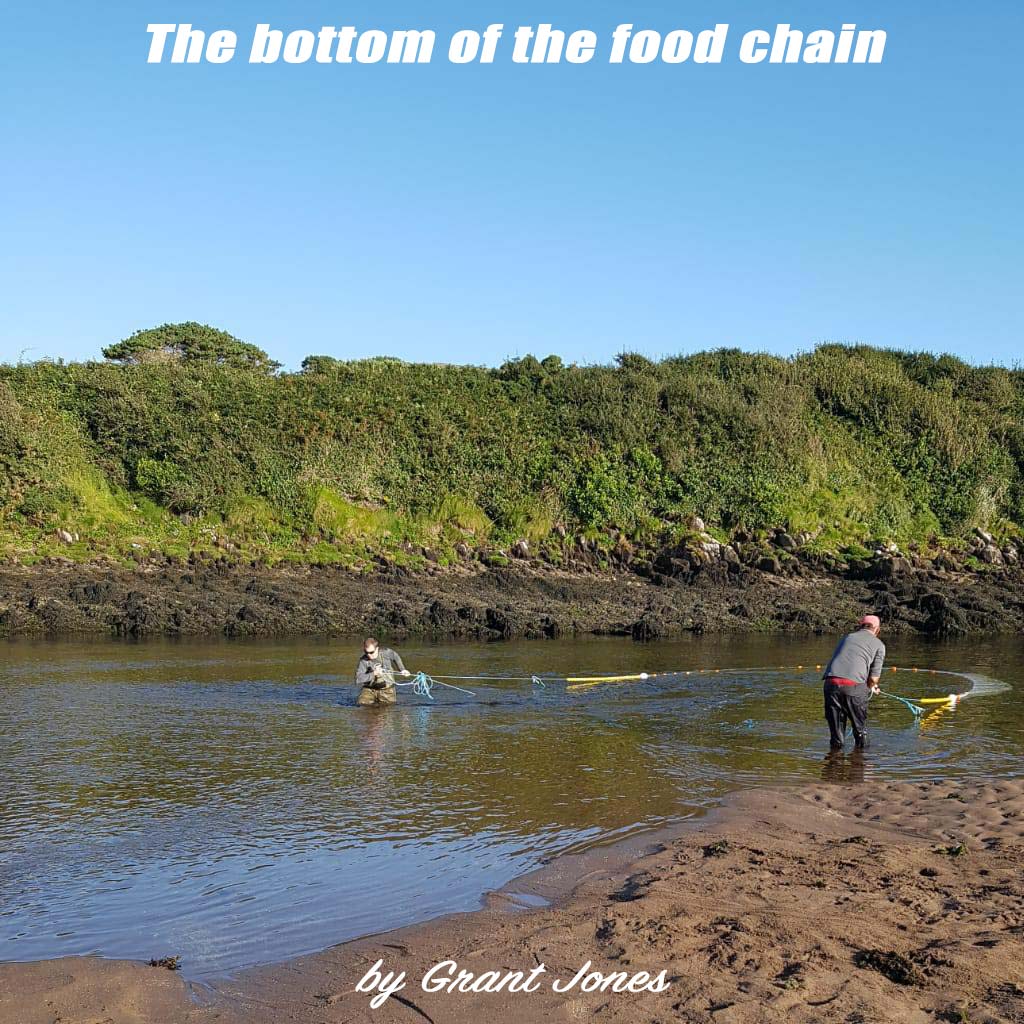 With certain developments lately I feel it absolutely critical to talk about the bottom of the food chain. The phrase on this occasion is not used as an analogy for any particular individuals (though it may apply to those exploiting the resources I will speak of), I talk of it in its truest sense to us as anglers, the base of the food chain upon which so many of the marine species we derive such enjoyment from depend.

There are a number of reasons this has come to the fore for me to raise this month. Whilst it has been a subject burning inside me for some time, the trigger was perhaps the reading of a regional IFCA statement giving an indicative view of progressing towards permits for bait collection.

In line with case law, individuals would continue to have entitlement to collect bait for their own use, at a reasonable level. The permits would in essence be for those seeking to conduct commercial bait digging/collection activities. This does, however, open a number of grey areas for recreational anglers, not least what constitutes a reasonable level? What happens when you intend to dig bait for both yourself and a group of friends? What happens when you wish to hit a big haul at once to freeze down?

Not withstanding the above queries, it must be said that I rapidly discovered I was in the minority who thought the permits were a good thing! Others seemed to err on seeking a continued free for all, with the fear that any restrictions faced by commercials would soon be faced by ourselves too.

There’s certainly form for this. We’ve all seen how seeking greater regulation for commercial bass anglers left us with a reduced bag limit ourselves in the UK and Ireland, with many wishing bodies like BASS and the Angling Trust had stayed out of the issue. They didn’t and, they now receive a fair bit of criticism for making people more aware of angling, in the mean time utilising quite alarming numbers of supposed anglers taking a far from attainable total yield of bass.

Having seen how their actions can go so wrong, it would perhaps be unsurprising to see the Angling Trust seek to defend any application of permits; though is that the best course of action? At a very primary level, how can they argue for commercial restrictions at sea, but not commercial restrictions within the inter-tidal zones that produce so much of the crucial food for species such as the aforementioned bass? There would be a clear level of hypocrisy. The argument that recreational anglers are perhaps the key beneficiaries of an unregulated free for all would only stoke fires of discontent between the commercial and recreational sectors.

To that point, if permits are introduced, whether charged or not we can infer an increase in paperwork and cost over time, perhaps even quantity restrictions. Running a purely cash based business outside the eyes of the tax man will become increasingly difficult and all of this will mean one thing; costs will go up to the consumer, us – the recreational anglers.

Tackle shops may look to farmed worm products instead, though for how long this will remain viable, with the demand on such farms growing yearly to support medical research, is in itself questionable. Without boring anyone with too much detail, both rag and lug blood is of key interest to medical researchers, keen to exploit the benefits of oxygen retention capacity the species show.

The final possible implications to the recreational sector lay in the demand cycle. Faced with increased costs but retaining the right to collect for personal use, digging ones own bait will become a greater justification of ones time, for those capable and in the know anyway. Further to this, a grey market of commercial diggers seeking to maintain a cash business will see direct sales, cutting out the tackle shops, no doubt increase. It would be inevitable that tackle shops would have to show an audit trail of their diggers, including quantities and payments made, that won’t work for many so they will see what business they can drum up directly with anglers.

Despite all this, why do I continue to support the principle of permits for commercial bait collection? Because, the issue is far bigger in terms of exploitation at the very base of the marine food chains. We can’t very much pursue the bigger ticket issues whilst simultaneously blocking any progression towards regulation in related areas.

Commercial pressure on worm beds may not appear to be so pressing as to require restrictions at this stage, though who is to say what commercial interests could occur in the near future? If medical research places a high value on the species and farms cannot meet demands, who is to say mass exploitation of the beds by big pharmaceutical companies won’t become an issue? As for existing pressures, we may not deem them so high, but we only have to look at the increasing scarcity of snake white rag to know how bad things could get if we don’t take some action now.

Lug, for instance, is in abundance locally to myself, but how many more times can my local beach resemble the Somme after the local ‘bad back brigade’ seek an easy top up to their disability benefits before the beds are depleted substantially enough not to just impact the immediate but also future yields?

So far, all I have touched on is our access to bait as recreational anglers. More importantly, what about the access to food for the fish we target? Many estuaries are now devoid of crab after the 100,00 tiles and tyres have been worked tide in tide out and we wonder why the flounder and bass numbers decrease year on year in such areas. We immediately question the take of flounder for pot bait in Poole Harbour as a reason to their decline, but what impact is dragging the rag beds doing?

If you still take the view that the impact is negligible, then it’s time to start questioning the severe lack of thought process across the wider commercial sector when it comes to addressing marine stock levels. Perhaps pictures of hundreds of bass in a net is a more striking image than several tonne of sand eel, but it shows a clear reluctance to address the root cause of depleting fish stocks. It’s relatively pointless saving a species from commercial exploitation if you are still allowing the obliteration of the food sources they rely on.

Consider the humble sand eel. The RSPB have already made great strides to restrict commercial pursuit of this species in certain areas, given the rapid decline in numbers of puffins. Yet, an eerie silence indicative of failing to make the link between bait fish stocks and those of species like bass persists from the angling world. Perhaps, again, it is down to the fact that we fear the impact of restrictions upon ourselves as consumers of sand eel.

The reality is, as recreational anglers we consume a frankly insignificant number of eels, and indeed other bait fish, compared to wider industrial level pressures on the species. What’s more, the transparency of what we use exists. How many eels in a blast frozen packet? Just count them, the impact can be seen, transparency on this is key.

However, how many eels go into feeding the pigs from which we acquire our various cuts of pork? How many eels and other bait fish have had to be obliterated into fishmeal to produce just one rasher of bacon? It is here where the impacts become murkier. There are those so aghast at the commercial exploitations of our sea that they won’t consume anything bar sustainably caught species, yet where is the information readily available to them to turn down a packet of bacon for this very same reason?

It’s not restricted to pigs. Farmed fish is seen as sustainable though whilst some have moved to more sustainable feeding methods, others still rely on up to 5kg of commercially caught bait fish to produce just 1kg of farmed fish. Similarly, where is the readily available information to inform the consumer of this so they can make ethical choices?

Astoundingly, the issue is not even restricted to just animal feed. Bait fish is a key aspect of many ‘organic’ fertilisers for fruit, vegetables and even the sort of flowers put into bouquets daily up and down the country. I don’t ever remember seeing ‘unsuitable for vegans, grown on a diet of thousands of mulched up sand eel’ on a pack of supermarket vegetables. This information is hidden far away from the consumer whilst the biodiversity of our oceans depletes daily.

A final large area of use for such bait fish is in the wide variety of fish oil products on the market. Have you ever seen any fish oil based product provide information on how many fish went into it? For the majority you are lucky if they even name the species. It’s unfortunate to see the great gimmick of bait additives now flooding the sea angling market. How many profound advocates of the latest stinky goo have been seen to criticise the commercial industry in the past? Yet how do they believe the fish oils within those additives to be acquired? Advocates of ‘fresh is best’ should perhaps be minded to also point out that the target species still having a natural food source to bring them to the area is even more critical. You can cover a bait in the most magical formula known to man and it’s going to be no good if to create that you’ve contributed to the removal of the target species key food source.

The answer to all of this has to be greater regulation and transparency. Attacking the base layer of the food chain will always magnify issues the further up the food chain you go. We have to address this root cause and if that means permits on bait collection of any commercial quantities then I will support that as a step closer to recognising the ecological importance of protecting these marine species.

As for transparency, I’d like to see every single product that has used a marine species within its end to end production process call out the species used and the yield required to produce the product in question. I’d like to see this marked up on everything, with a clearly recognisable logo utilised too. There shouldn’t be a pack of bacon, bunch of flowers or bottle of bait additive exempt from displaying the exact impact they are having on the bottom of the marine food chain.

I shall be actively lobbying for the above to take place. Letters have been drafted and will be issued following the UK’s general election to all relevant ministers. The Angling Trust have also been contacted and will be asked to support this lobbying. It will be key to engage outside of the angling industry and in that respect, engagement with the RSPB as well as manufacturers, suppliers and retailers of impacted products are also in the process of being engaged with.

We really can make a significant difference here, but as always, only if we present a united and non-conflicted front. I fear that fighting tooth and nail to undermine permits for bait collection could be thrown straight back at us when we critically require restrictions on other species at the bottom of the marine food chain.