Menu
PrevPreviousFinding the conditions
NextFor the Rhyl of itNext 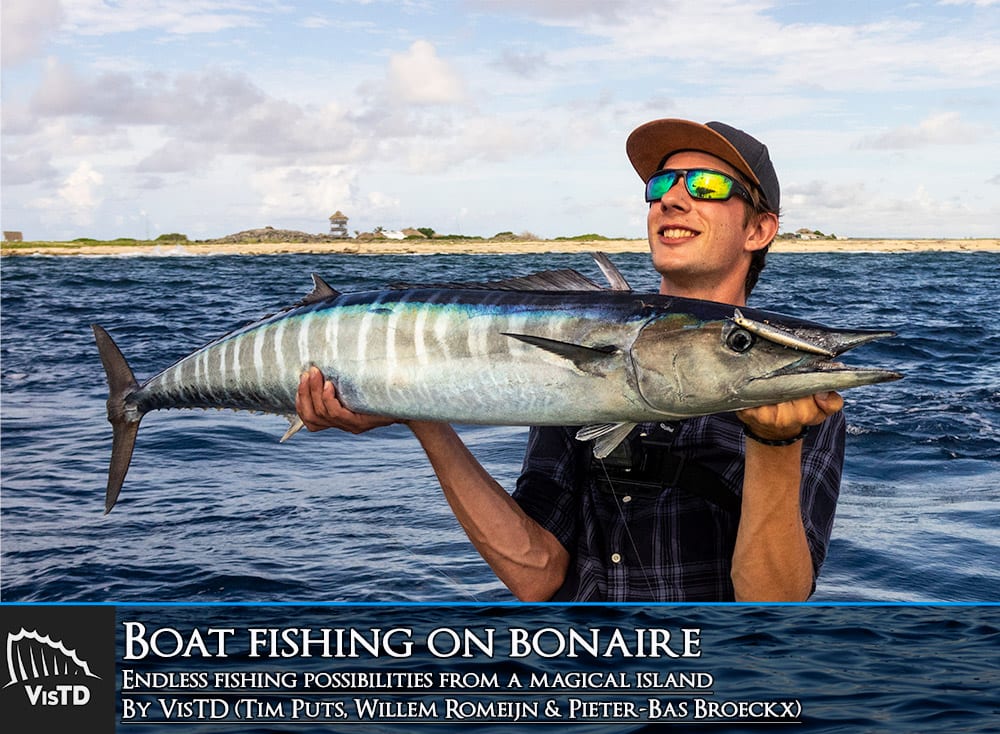 In the last article we detailed the light shore game possibilities on the island Bonaire. This island, in the middle of the Caribbean Sea, offers not only shore fishing possibilities but also there are great opportunities to fish from a boat. We visited the island to meet our friend Peter from ‘Fishing Adventures Bonaire’ and he showed us not only how to catch fish from shore, but also put us on some great boat fishing action.

Bonaire has it all!

Our guide Peter couldn’t stop talking about all the great boat fishing possibilities around the island. Speed jigging, micro jigging, run & gun tuna fishing, trolling, live baiting, it’s all possible and all great fun. The fact that Peter does this all with relatively light tackle ticked all our boxes and fired us up with enthusiasm! We made a plan and decided that the first morning of boat fishing would be speed jigging for all kinds of species with the main target being some solid Almaco Jacks.

Around the island there are several hotspots to be found that are great for fishing the jigs. The deepest spots (100-200m) are superb for species like almaco jack and tuna. There are also shallower reefs (50-100m) which offer possibilities for slow pitch jigging and micro jigging. On the first morning, we decided to fish one of the deeper spots. This is a small underwater pinnacle with a depth of 150-170 meters. In this area, we fished with heavy jigs (200g). For us, this speed jigging was a new technique and not something we were used to.  Our muscles were feeling the burn; it’s a truly exhausting method of fishing!

Willem was very lucky on the first drop. Before the jig could even reach the bottom, a nice sized blackfin tuna grabbed it and the battle was on! On this heavy setup the fish did only run a little bit and after a minute or so we had a nice fish in the boat to start with. Willem’s first blackfin tuna that was destined to be sashimi later that day. Great start! Blackfin tuna often feed very early in the morning, catching them on the jigs is very common here, Peter told us.

Tim was next into a fish. Solid headshakes told us he hooked the fish we were after: Almaco jack! Not the biggest of them all, but this one opened the floodgates. Once you catch one almaco there are more, and that’s what we experienced.

Multiple small almaco jacks came to the boat and Willem caught a real big one. This fish took a lot of line during the fight. What great fighters these fish are, truly insane!

After the third drift on the spot, it seemed like the fish disappeared. No more bites, they wised up. It was time to move on and try a different approach: micro jigging.

When the morning bite slows down and the arms are burning after speed jigging and fighting big fish it’s time for something different. Micro jigging! This way of fishing is the exact opposite to speed jigging in the deep water. When micro jigging you target smaller fish with lighter tackle. The spots are shallower and the variety of fish species you hook is much more varied. Super exciting for us, as we are perch fisherman in our home waters. Light tackle is the game we know!

We try to drift the edge of the reef where tere is some tidal current. This is the place where fish are most active. We find such a spot very nearby the island of Klein Bonaire. This island is only one kilometer away from the main island and makes a great place to fish. On the sonar we soon find fish and dropped down our small (max. 40g) jigs. It’s a matter of seconds before we get the first hit. A school of blue runners was hunting down the baitfish and give us some good sport on the light rods.

What we loved the most about this way of fishing is the variety of species you can catch. Close to the reef we caught various species like squirrelfish, small groupers, bar jacks and the super hard fighting schoolmaster snapper. These snappers always try to find the reef after being hooked, often with success. The variety in colours on these fish is amazing, from brown with white stripes to bright orange with yellow stripes. Beautiful!

It normally happens out of the blue, never when you’re totally prepared! In the tidal current small baitfish get pushed up to the surface by Blackfin tuna! Big schools of tuna hunting for baitfish are a great sight to see and really get the adrenalin pumping. The heavy jigging rods were the first thing we had available when we experienced this so we sent our jigs flying into the busting fish. Blackfin tuna are super aggressive, every good cast was rewarded with a bite and a fantastic fight. We’d  fight the fish as hard we could, just to make another cast so we could catch another one. The blow-ups would always end very quickly, but keeping a close eye on the birds above the water was the tactic to find the hunting schools again.

This way of fishing was one of the most fun way to catch fish for sure. Super fast, extremely hard fighting fish and blow- ups right in front of the boat. We had been lucky to experience this, we only found hunting tuna like this once. Certainly one to remember.

To experience all Bonaire has to offer, we also did some trolling. Trolling is not our favourite way of fishing, but it can be super effective to target big pelagic species like wahoo. Since wahoo was on our wish list, we decided to give it a go.

Peter knows exactly the right spots are and how to handle a big number of rods while trolling. Peter is a light tackle enthusiast, so there were no big game rods involved but lighter rods with smaller reels. This way even a smaller fish hooked gives up a good fight. We noticed this when catching some small blackfin tuna and barracuda’s.

After a while of trolling one reel started screaming and it was Willem’s turn to fight the fish. At firstz we thought we hooked into a blackfin tuna, but when the fish showed itself in the clear water, we saw its  stripes. Wahoo! It was totally lit up, angry and fast. Peter gaffed the fish like a pro and we took some nice photographs of the fish with its stripes still on. What a beautiful fish, and great tasting too as we found out that evening.

Another way of targeting big pelagic species, but also barracuda’s, is live baiting. For this we had to catch small sized fish as bait. Blue runners and small blackfin tuna were easily caught by chumming or trolling with tiny lures. These baitfish we would troll very slowly along the edge of a reef to catch barracuda.

It’s incredible to see how fast these predators would find our baits and we had some action packed hours. A lot of missed bites and stolen baitfish, but also super fast, leaping fish on the end of the line. Barracuda are such a fun species to target, but there is much more possible with live bait than this.

Live baiting can also be super effective for pelagic fish species, such as mahi mahi. None of us had ever caught this stunning fish so it was on our wish list for sure. Finding mahi mahi in this area is not easy, it took us a good few hours of working our baits over deep water until a fish grabbed it. The first one was a miss, but Pieter-Bas eventually hooked into something big. There was no doubt in the fact that we hooked into a mahi mahi, when the bright yellow and golden fish jumped out of the water in full sight.

What a spectacle! We were stunned to see this fish in all its glory, such a beauty to see. Although live baiting and trolling are not our preferred ways of fishing, these techniques certainly guarantee some great action from very impressive fish!

As described above, Bonaire and its waters have plenty of fish to catch. Then why drive the boat for three hours to Klein Curacao? We heard the fishing can be significantly better along Klein Curacao. This small uninhabited island has almost no fishing pressure compared to Bonaire. Peter has fished here before and had some superb experiences, so we gave it a try and headed over to fish for three days.

Tourists go there to enjoy the white sandy beach and to swim with turtles, and leave the island after a few hours. On the beaches there are special wooden constructions to sleep above the ground, if you want to stay overnight. This suited us just fine.

We first arrived at the island in the late afternoon and fished a little. Medium heavy jigging setups and 100 grams jigs were dropped and soon we found out the fishing was indeed better along these reefs. Some hard fighting, head shaking horse eye jacks were caught in the last daylight. Also, we hooked into some cool looking yellowmouth groupers and snappers. After nightfall we went to the beach for a little campfire bbq and some much needed sleep.

The next morning, we woke up early. Not because we wanted, no, we were attacked by mosquito’s…..swarms of them! With this discovery ,the next night we planned to sleep in the anchored boat, far away from the shore. The jigging continued and we were stunned by the species we caught here and especially the size of jacks that were hunting down our offerings. We caught some medium sized black jacks, a new species to us. They fight even harder than the horse eye jacks, what a blast.

After the morning bite slowed down, we wanted to catch some baitfish for a bit of live baiting. Trolling with small lures would always bring us some blackfin tuna. This time it wasn’t a tuna that hit Willem’s small jerkbait, but a much bigger fish. We were fishing light tackle and no wire leaders so the fight was be nerve wrecking and very long. When we saw colour for the first time, it seemed like we had a big barracuda hooked. After a few more minutes and some drag-screeming action we saw the big wahoo reaching the surface. Great fish and so lucky to catch this one on the light tackle without wire leader!

Sleeping on a boat is super comfortable, unless is starts raining… of course that’s what happened, so we had to wake up super early, it was still dark outside…..so we just headed out fishing. We started dropping our jigs very close to our sleeping spot.

Not once did they even reach the bottom. We dropped them right into a school of hunting horse eye jacks. And they were big! Tim was the only one that managed to land one and that fish was a personal best for sure, what a beast!

The rest of that morning was just madness. Everywhere we dropped the jigs they were hammered, resulting in a horse eye jack, big yellow jacks and even a whopper of a black jack for Willem. Ending the trip with a blast, just the way we like it!

We are passionate photographers and film makers. Not suprisingly, we made several Youtube films about our trips to Bonaire. Especially the films we made during the last trip, mainly from the boat, are worth watching. Have a look and enjoy!