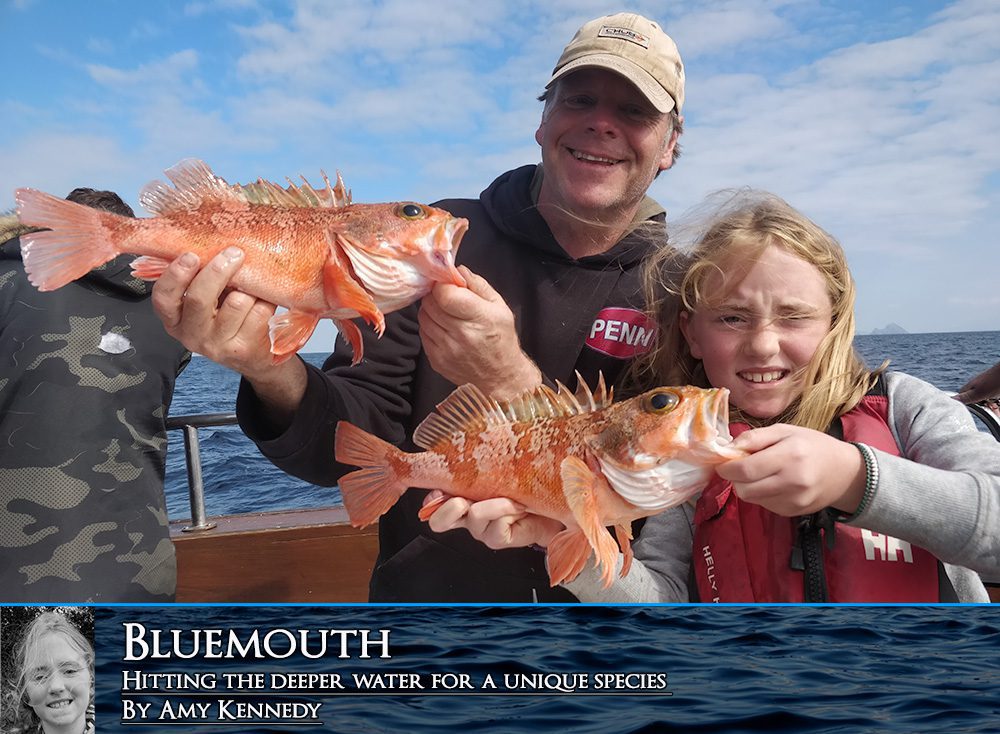 Welcome back to my latest fishing adventure. This month I went on the hunt for the elusive Bluemouth. It’s a fish that lives in depths of over 70m, they are slow growing and long-lived fish of over thirty years and don’t mature until they are fifteen years of age. They are one of a few fish that will survive for being reeled up from the depths. So, if you are thinking about fishing for them try to remember this and please try to put them back. This trip was booked with skipper Brendan O’Connell out of Cahirsiveen, Co Kerry on his boat Saint Colette II over a year ago by Mick O‘Callaghan.

It was in the lap of the Gods if the weather would be good enough to go. This part of Ireland has massive swells when the winds are wrong so the Bluemouth reef can only be accessed in the very best weather. With the date closing in Mike gave the call that it was a go. We got our gear sorted bought a few packs of Mackerel and stocked up on Kilmore killers from Shamrock tackle and some 10oz and 12oz leads.

My rod and reel choice were a Mitchell suprema Bolentino 2.0, 3m max 400g and a Penn fathom loaded with 40lb braid. This rod is very reasonably priced and lovely to use with a quiver tip and plenty of backbone. The reel is super, it has two speeds and if you are getting tired like I do. You can put it into low gear it’s a bit slower but so easy to get them up from 200+ feet. It was going to be an 8am start at the pier so we left at 5.20am that give us enough time to get the gear out of the jeep and get suited and booted. With everyone on board it was time to put to sea.

As like most boat trips we went looking for fresh Mackerel. It was surprising that only one was caught between the whole boat so with very little bait brought along we had to try to get some Pollock. My dad used it before and said it’s a good alternative, the skipper took us to a small reef for them and it only took a few minutes to catch what we needed. With the bait caught we started our ninety-minute journey. As we got outside Valentia Island, we could see the Skelligs and the Blasket Islands and to top it off a Humpback whale passed the boat and as it dived it gave us a good luck wave with it tail as a few Dolphins jumped out of the water. What a start to the trip. With this type of fishing, you need to have everything to hand. You must have a lot of bait cut have your leads and traces beside you because the drifts are short and you don’t want to miss out by looking for stuff.

With the boat at the mark and all rods ready the skipper shouted ‘drop away’. The heavy leads travel at knots to get to the bottom and it only took a few seconds before lads were saying ‘I’m in’. Then my rod got hit then hit again I was so excited and hopeful to catch my first one. With double shot of blue mouth coming in and my fish nearly at the surface I was delighted when I saw some orange flashes and when I landed them, I could feel the smile on my face getting larger. With the fish off and the bait back down my cousin Khristopher landed the first specimen of the trip. The skipper then called lines up as it was time to reset the drift.

There was a good number of fish coming on board on each drift that included a few treble shots too. As I was fighting a fish Terry got a good-sized fish on board, my dad helped Terry with checking the measurement. With my fish halfway up, my arms were under pressure so I pressed the button on the reel and to be honest it made it so easy. Then Terry gave a cheer it’s a specimen, so into the bucket of water it went to keep it alive until he got his camera out, as I lifted my first treble shot of blue mouth into the boat the skipper said the middle fish might make it? With the smaller ones put back the skipper put the largest one on the mat and then looked at me with a smile and said it had made the length. What a feeling and as the camera was out, I got a shot with Terry and his specimen.

Just as I was going to put it back the skipper said to put that one into the tank. He explained that the Dingle Oceanworld aquarium wanted some to display. As my dad and I were sharing the rod it was time for him to have a go. He was ready and dropped the bait down. I turned my head and everywhere I looked on the boat there was fish being landed. Then Dave O Leary landed a fine Ling. Mick had a treble shot of Bluemouth then more specimens were also landed. Kristopher then landed one over 41cm what a cracker. That too went into the tank for the aquarium.

With only my dad and Mike without a specimen the skipper called the last drift of the day I had my fingers crossed hoping they will have the luck. With the boat on the starting point, they all dropped to the bottom. We knew that at the most you would only have three drops before we would drift off the mark. With a fish on, my dad got it up as quickly as possible and again two small ones, back down he went again. As soon as the lead hit the bottom, he was fighting a fish, this time he said to me it feels like one fish and if it is it might be the one so be ready with the net.

As the fish came closer for us to see we could tell it was on its own. I got the fish in the net while Mike had one on the mat but sadly it was only 37.5cm .5 of a cm off. My dad was next to put his Bluemouth on the Ifi measuring mat and Brendan the skipper declared 38cm!! He was delighted and said thanks fish god, with that everyone on the boat was chanting Mick’s name in the hope that his last drop would produce a specimen but sadly it didn’t happen. So, with all the lines up we headed for land, it was a super day’s fishing by all and I hope to do it again in the near future.

I would like to thank Mick for inviting me and hopefully we will be able to return the favour. The skipper and his son Daniel were excellent all throughout the trip so a huge thanks to them for a day to remember.

The Saint Collette 2 operates out of Cahersiveen marina, in South Kerry. They also do full and half day trips with rods available to hire.