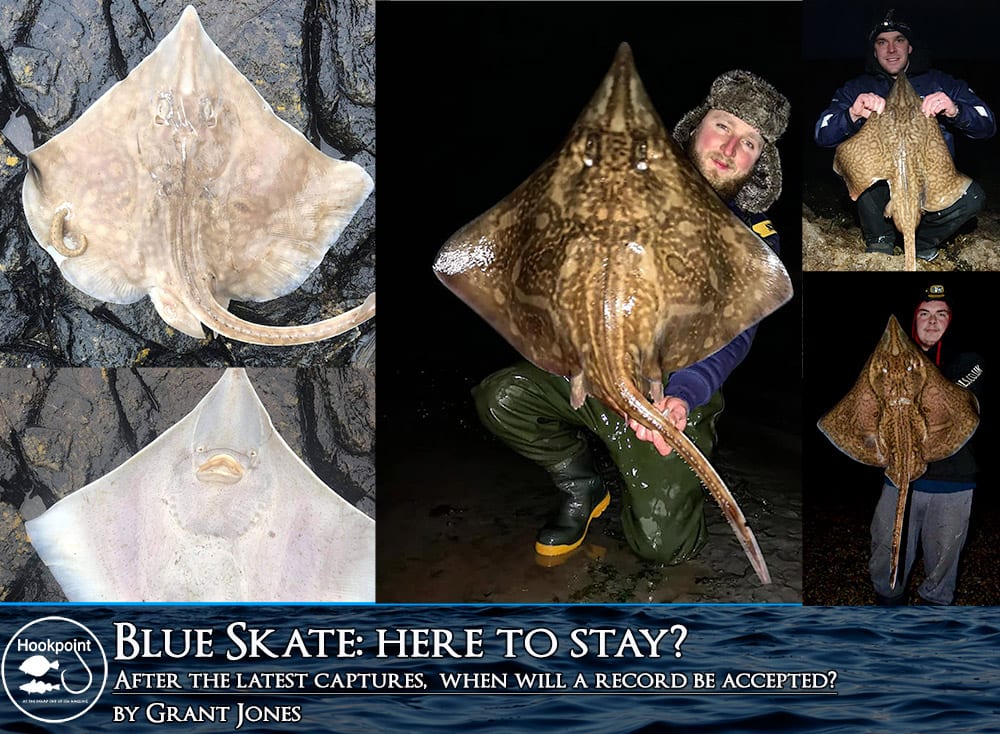 If you’d had told me two years ago, when Hookpoint started out, that I’d be writing a feature referencing the recent capture of a juvenile blue skate from the north shores of Cornwall, I’d have told you to pull the other one. These are, after all, considered the rarer of the two skate that were for years lumped in together as ‘common skate’ or ‘Dipturus Batis’.

I recall reading on social media about the impressive captures of some blue skate, now classified as ‘Dipturus Flossada’ aboard an exploratory trip by the Size Matters charter, travelling some considerable distance off the south west of England into considerably deeper waters than we experience anywhere close to our shores.

However, a little over a year ago now, I received a call from a good friend telling me a peculiar skate had been landed from Chesil by Till Hall. With frantic internet searches clearly taking place on the beach they were leaning towards identifying it as a barn door skate and, if you were to look at the images of this large species of skate, you could be led to thinking the same. Though, the fact they live on the western Atlantic just off the shores of America, showing minimal migratory tendencies, did pose the question as to how one would have crossed the great pond and found itself on Chesil beach. Still, it is Chesil, nothing should ever be ruled out!

Luckily, in the days of social media, it doesn’t take long for someone a little more learned to observe good pictures of the fish and provide a positive ID. There are ample marine biologists to call upon within our community but, when it comes to skate, there are few if any who know them better than Davy Holt, who was on hand to confirm the species as a blue skate. At 8lb 8oz, it was still a relative juvenile to the size they can attain, though it should be noted they don’t grow to the size of their previously shared classification cousins, the flapper skate, Dipturus Intermedia.

This was still a surprising catch, from Chesil or indeed from the shore anywhere. There had been a few recent catch reports from boats, but largely fishing off of Ireland, not the UK. What rapidly transpired was all the more surprising, it wasn’t the first from Chesil, with an unidentified skate having been landed just a few months earlier at a slightly smaller 7lb 7oz. Photos of this fish soon confirmed it as a blue skate too.

One random catch can occur. Two is not out of the realms of probability either, especially on Chesil. However, in the following months, reports from commercials started showing first ever catches of blue skate. They aren’t unreported by the commercial fleet, either in waters further south off the coast of France, or generally in deeper water. However, inshore commercials were now starting to sporadically report them, from a variety of locations, not just on the south but the east coast too. Whilst these growing number of reports came with pictures to substantiate the catches, record logs often continue to classify all common skate catches under the combined ‘Dipturis Batis’ name, making it hard to tell which of the species is being landed.

All of these catches seemed to occur throughout the autumn to winter period. It quietened down through the spring and summer, and whilst hopes may have briefly flirted with a new species to start to target, the lack of any further substantive reports seemed to put the story to bed along with the many other random catches Chesil beach produces on an almost annual basis.

As soon as the colder months were back upon us, however, further reports materialised. First off, a similar sized fish to Till’s caught by Jamie Steward, with a quite striking chunk out of the wing! This catch wasn’t from Chesil though, it was from the mid Bristol Channel. To keep the form of these localised catches coming in twos, it was soon followed by a specimen of 15lb 3oz, again in the Bristol Channel, this time landed by specimen hunter Guntars (Gruu) Zukovski.

Whilst the Bristol Channel had a prolific skate fishery in years gone by, it is hard because of the confused classifications to say whether these were large blue skate or flapper skate, and indeed a common school of thought which some archived photography supports is they were a third species, white skate. What we do know is that there is no recorded British shore caught record for a ‘Dipturis Flossada’. Surely then, Till’s fish would have qualified, though more recently Gruu’s will have topped it?

No. The British Record (rod caught) Fish Committee have provided the following response in regards to any submission of a potential record of the species:

“The BRFC’s advisor from the Natural History Museum has replied to the enquiry about the different skate species at length and in great detail. The crux of the matter seems to be that although it has been asserted that there are two different species this has not in fact been established. He ends his long email by saying “I understand how frustrating it must be if anglers feel they are recognising the two species consistently in the wild, and the scientists have not yet made the position adequately clear, but I hope the above account will show why we have not yet jumped in with a decision. After all we (BRFC) have always maintained that our decisions are based on good scientific evidence.”

So, currently the BRFC continues to accept claims in respect of Dipturus batis. In fact, a realistic claim for a British record is unlikely due to the protected status of the species and the fact that the BRFC does not accept claims for fish weighed on board boats. We have accepted submissions for the Notable Fish List, based on measured length and wingspan.

I will put the question of whether the BRFC might consider claims for the asserted separate species on the agenda for the next BRFC meeting (June). But even if the committee decides to accept such claims there would be a potential problem in respect of incontrovertible identification from photographic evidence.”

This, is completely in contrast to the information given by ICES – the full report can be read here.

The key takeaway though is on identification, clearly demonstrating that with the right photos, species identification can readily be made. It states:

“Iglesias et al. (2010) provided a list of methods to identify a D. batis specimen as either D. cf. flossada or D. cf. intermedia. Of the six methods used, one requires the use of a microscope, and so is not a suitable method for use on commercial vessels. Of the other methods, ICES considers that at least two must be used to ensure accurate identification. Scientists in the field found that using two of the following methods:

• The shape of the markings on the dorsal surface;

• The direction that the caudal thorns point; and

• The relative distance between the two dorsal fins.

is enough to confirm species identity. No special tools and minimal training is required to observe these features.

A genetic study on samples collected by the Spanish Porcupine survey agreed with the morphometric identifications of specimens (Rodriguez-Cabello et al., 2012).”

To put that into plain English; you can tell the difference by looking at them and not having to take genetic tests. Given the move to accept catch and release records, we’d urge everyone to keep the pressure on the BRFC to start accepting this species. It is such a good news story of a species seemingly recovering from the abyss within our waters, that to fail to acknowledge it serves to restrict further data being captured on the species and thereafter further efforts to support the species recovery.

In further recent noted catches, a similar sized blue skate to Gruu’s was landed aboard a commercial vessel fishing just off of the needles on the Isle of Wight. These are more grounds with historic abundant reports of ‘common skate’ which may well have been the blue as opposed to the flapper variety.

Most recently, in what is to me perhaps the most notable catch of them all, I received a message last week of a ‘common skate’ being landed from the shore on the north coast of Cornwall by Chris Martin. Interestingly, Chris is also a commercial fisherman and has never witnessed the landing of a skate of this species previously on any of his local grounds, though with intrigue will certainly be keeping his ear to the ground now.

It took a matter of seconds to identify it as a further blue skate capture when the images came through. Though the reason this fish was so notable in my mind was it’s diminutive size, at around 3lb in estimated weight.

My logic may be as simple as it comes here, but a larger fish is more likely to turn up in random places. Their movements are typically greater, with younger juvenile fish having a tendency to stay and feed in ‘nursery’ areas and not stray too far. Now this may be misguided, as little in detail is known of the breeding habits of these fish from our coastline. Perhaps more will be gleaned with an increasing number of catches – a further reason to recognise records. However, in the mean time, a small juvenile catch raises hopes that the breeding is taking place not too far from our own shores.

Could this most recent capture also stem from the same head of fish as the two from the Bristol Channel? If there are a number of breeding fish out there, as the crow flies from the deep waters in the mouth of the Bristol Channel, it is no different in distance to where the channel fish were caught and where this smaller specimen was landed in North Cornwall. The spill out from the breeding area could naturally cover both coastlines. Further evidence to support this would be captures in the next year or two from South Wales, perhaps among the resurgent numbers of blonde ray. It’s notable when thinking of this that the first two Chesil catches came from the known blonde ray grounds.

The captor of this latest fish, Chris Martin, in his experience as a commercial fishermen, is certain this would not be a one off for their coastline. Whilst not having had experience of this species, he references the habits of other species of juvenile ray to group together. He also confirmed that the fish was landed on a typical sandeel bait intended for other ray species, where the flood produces an eddy of slack water which is when the fish was caught.

The next few years certainly prove to be very interesting in-so-far as this species is concerned. If you are fortunate enough to land one, please let us know here at Hookpoint as we continue to press for the BRFC to recognise this species. The more data we have, the more likely a change is to occur.