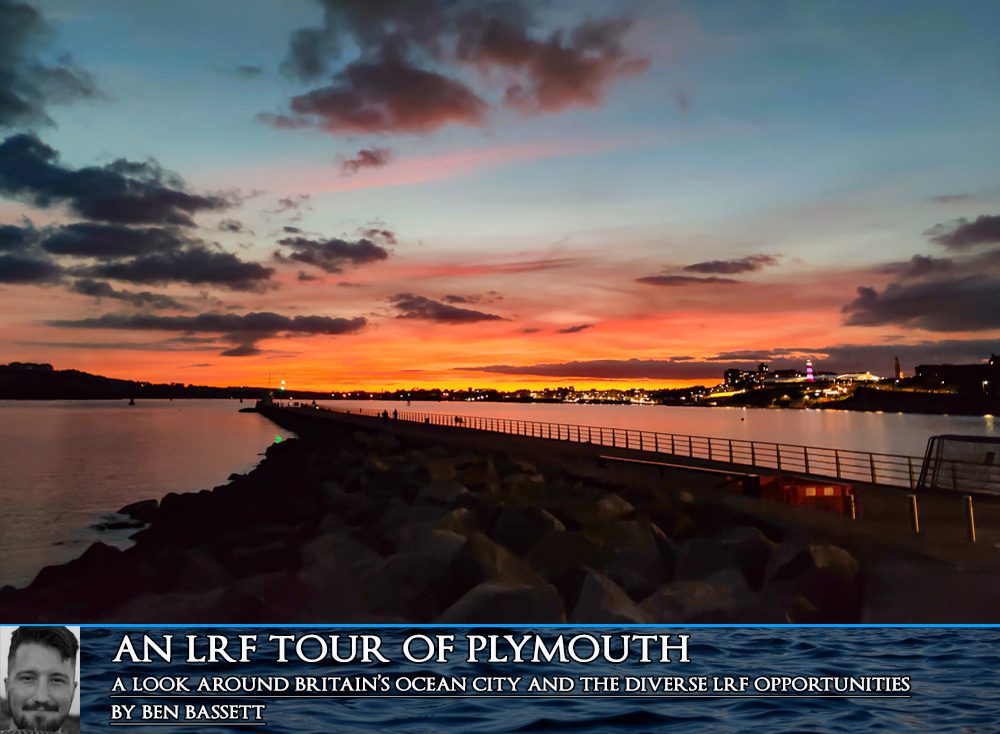 There’s a spot in the north of Plymouth that gives a view right across the city. Facing a south-west direction, almost the entire city is visible, from the Tamar Bridge to the grand promenade of the Hoe, across the crest of Mount Batten and the River Plym that gives the city its name. It was while gazing across this vista, that I was inspired to write about my hometown, especially through the eyes of an LRF angler.

The largest city south-west of Bristol, located on the border of Devon and Cornwall and home to over 250,000 ‘Janners’, modern Plymouth is a city built on the ruins of The Blitz in the Second World War. The war sadly having levelled most of the historical buildings and left Plymouth with its unusual mix of brutalist fifties architecture and ultramodern glass and render. Walk or fish around the Barbican and the Hoe foreshore though, and the history is still clearly visible, and shows what the city could have been.

To its west, a slowly decreasing naval presence has shrunk the once vast and famous Devonport Dockyard.

In its receding footprint, twenty first century gentrification is moving in. This is a stark reminder of the duality of Plymouth, it is a place rich in history, natural beauty and posh postcodes, whilst also having an average yearly wage of nearly £10,000 less than the UK in general and certain areas that are some of the most deprived in the country. It’s on the Devonport side of the city that the river Tamar dominates the landscape.

The Tamar side of the city has its own microclimate, it rarely gets cold enough for frost, even when the rest of the city is frozen. On a cool spring morning the mist rolls up the river valley, encasing the vast naval ships and Torpoint car ferries in wispy cloud. The deep estuary is both home to jet black nuclear submarines and hot pink couches bream. It’s a river that can turn up any fish species, yet can be a difficult beast to tame on even the heaviest of tackle.

Running alongside the end of the river is the sea wall of Mutton Cove, in the heart of Devonport. There, the bipolar nature of the city is so obvious. It is both stunningly beautiful, especially when gazing out to sea, whilst simultaneously being prone to litter and the uglier, unsocial side of human nature. Never once have I been troubled there, but combine the heat of the city and the mackerel run, and I will happily avoid it. The best time to visit the Cove is at night, when the daytime feather chuckers make their way home and you can use the streetlights to your advantage. In the yellowy glow, the summer scad are plentiful and the winter herring even more so. Both willingly take small metals and soft plastics fished delicately through the illuminated water.

The river is at its deepest and most powerful at its very end, where the estuary joins the Sound. There, at Devil’s Point, LRF can be tricky. The shore record conger was caught from the point and that tends to be the type of angler it attracts. On its day though, and in smaller tides, it’s fishable with lighter tackle and attracts a multitude of species, all of which can be caught by drop shotting right under the rod tip. Many a tiny rattle, with the assumption of being a blenny, has turned into a brutish ballan wrasse at that mark. It’s a moody spot, but favours the bold Lerfer.

A spot that is far kinder to the finesse focused angler is Millbay. Here, the wise old man of LRF can often be found plying his trade, Maurice Mitchinton.

Maurice knows the marina inside out and has caught everything from sea scorpions to tub gurnard there. Millbay is at the heart of the modernisation of Plymouth and you can find yourself fishing in the shadow of the Brittany ferry and brand new apartments, whilst also dodging the odd rat and rough sleeper. With the rapid gentrification in this corner of the city, it’s easy to wonder how long anglers have left to fish there, when, like the less fortunate and rodents, we are unwanted too. Whilst fishing is still possible though, so is the easy access LRF, catching blennies, wrasse and more exotic species underneath million pound Princess Yachts. 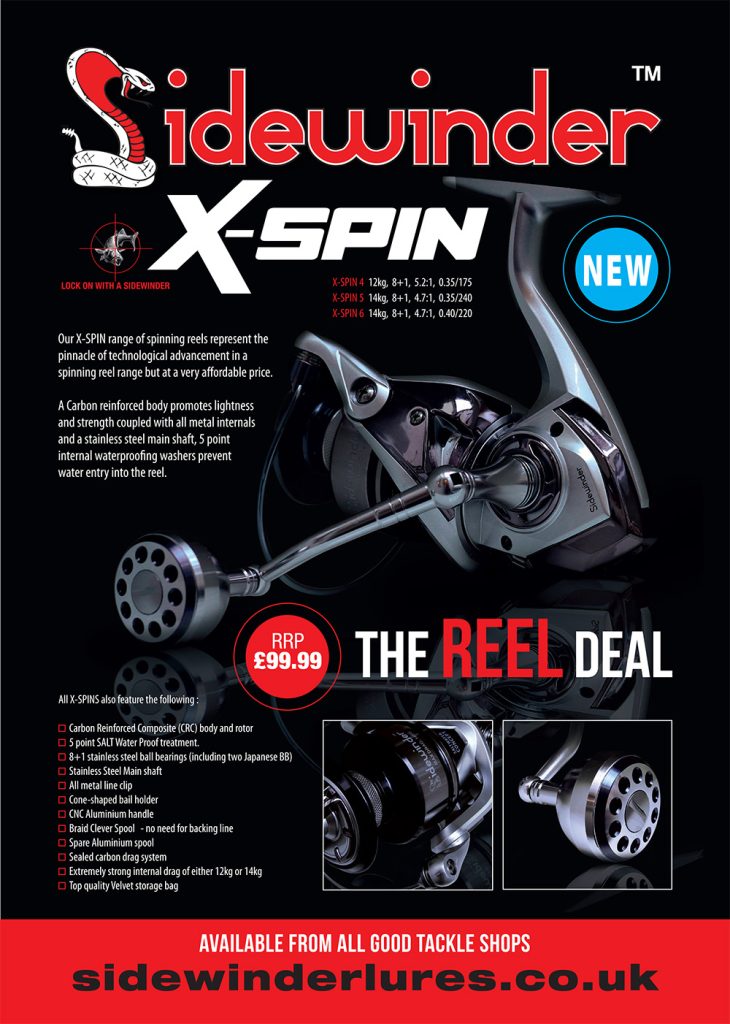 Speaking of easy access, you can hardly get kinder than the well known West Hoe Pier. It is actually not a pier at all, as it’s really two arms of a tiny harbour that’s rarely, if ever, used for mooring boats. From the two arms you can find exceptionally easy fishing in the warmer months. My favourite time to fish it is early autumn, in bright sunshine and cool mornings, when the sea swarms with snake-like garfish. These athletic fish attack most small lures and are an exciting and often frustrating LRF target. You certainly hook many, many more than you land, but that is the fun of it.

I love to walk across the grand promenade of the hoe, home to the iconic Smeatons Tower. Once part of the famous Eddystone lighthouse. It was built so well that they couldn’t remove most of the base. A sight you can clearly see on a clear day, with the new lighthouse sat next to the stump of the old. From Smeaton’s Tower you get your best view of the Plymouth Sound, the massive inlet sheltered by the breakwater. The mile long sea defence, made from 4 million tonnes of rock, creates a relatively calm harbour and is certainly an attraction for a myriad of fish species. Those with kayaks or boats, who know where to look can find the bizarre looking red band fish, a ribbon-like fish that lives in silty burrows in the calm waters created by the structure.

A large part of the Hoe foreshore is fishable, although you often have to battle the sunbathers and wild swimmers for space. If you fish hard on the bottom you will find good numbers of wrasse, including some real lumps! There’s also the smaller wrasse species in good numbers, often in the most surprising places. But like many marks in Plymouth, there are snags galore and I wouldn’t recommend targeting the ballans with anything less than Heavy Rock Fishing (HRF) tackle. Thankfully the many bass, pollock and occasional sea trout make the open water more forgiving.

Travelling east, towards the historic Barbican, there is Elphinstone car park, affectionately called ‘Elphi’ by the locals. This is another extremely easy and rather safe mark to fish, although again I would avoid it on a hot day in August, as the numbers of flying feathers increase. Here you can fish from the boot of your car and many bait anglers do. For the Lerfer, Elphi often holds lots of wrasse, scorpions and gobies, with dragonets and the occasional black bream on the cleaner ground. It’s a great spot to stop and then explore Commercial Wharf and Sutton Harbour.

As you walk to the gated harbour, you can’t avoid Commercial Wharf. There’s no parking there but it features similar ground to Elphinstone, but has a greater chance of turning up special catches like specimen flounder and young couches bream. Personally I love to work small metal jigs around the various structure here, where the next hit could be something special.

Sutton Harbour itself has a thriving fish market, aquarium and many, many pubs and bars. What is really interesting lies beneath the often diesel covered surface though. Underneath the trawlers, crabbing potters and pleasure boats, can be Plymouth’s most exotic summer visitor, the grey triggerfish. The Atlantic wanderers can turn up almost anywhere along the

Plymouth coast, but often find themselves spending a few days in the harbour. Here, if you are very lucky, you can witness them cruise like mullet, shredding any crustacean they find with their incredible teeth.

Triggers aside, the harbour can be tough fishing in the day but it comes alive at night. Once the temperatures drop, specimen flounder can be found stalking the shadows, all while drunken students pass by and the acoustic singers echo across the water. It’s not just large flatfish either, as there are plenty of jewel-like two spotted goby and even the occasional immature cuckoo wrasse. To help you catch all of the above, at the back of the harbour there is Osborne And Cragg tackle shop, holding a treasure trove of exciting LRF tackle. Well worth a look to any visiting angler.

Once you leave the harbour and head east, you find yourself at the mouth of the river that gives the city its name. The Plym is a much more humble river, but is still awash with the silver scales of mullet and bass. Laira Bridge, Saltram and Hooe Lake are all reliable spots to target these species plus reliable numbers of flounder and the odd tub gurnard too.

Finally our tour ends on the boulders of Mount Batten, a long breakwater jutting out into the Sound. The waters around this historic structure are home to huge ballan wrasse, hordes of blennies, poor cod and a much desired flatfish. The open sea that surrounds it can be excellent on its own, but if you get between the boulders, in the darkest shadows, special

fish are lurking. The most special of all of them is the topknot, Britain’s quirkiest flatfish.

So there completes my LRF tour of my home city. Hopefully this general guide provides a bit of inspiration, especially as we come into the warmer months and Lerfers find themselves on holiday in the south-west. It’s a city rich in history with many different sides, both beautiful and not so, which makes the species on offer all the more special.