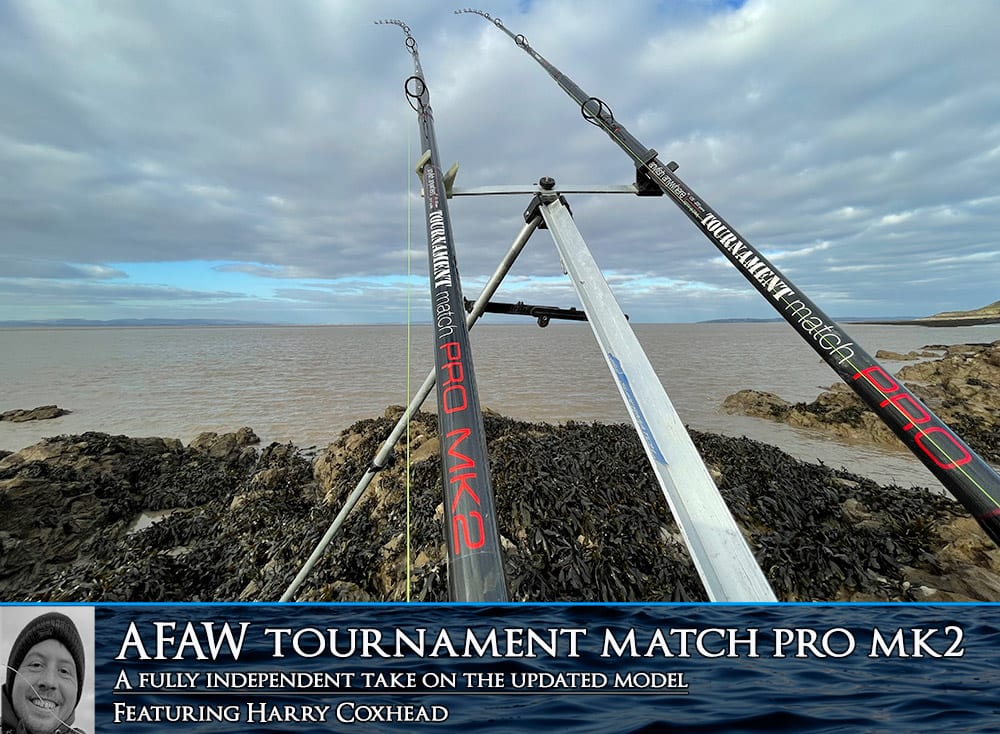 There’s always a clamour surrounding the release of a new rod from a reputable brand, and this certainly applies to Julian Shambrook’s Anyfish Anywhere. The following this brand of rods has built up is not nurtured in the modern way of filling social media with enough influencers to manufacture a false buzz around releases, but from reliability and performance built up over time.

So on hearing of the release of the Anyfish Anywhere Tournament Match Pro MK2, we stuck out a call to arms amongst our social media following to find an angler who was buying one of the first ones off the shelves. We wanted to hear from an angler that was spending their own hard earned money on the rod, as a tonic to the mass of ‘sponsored’ product release reviews that seem to be the standard fare offered up these days.

What we really wanted to hear, is how this new model differed from the much loved MK1 that it would supersede. So we were more than pleased when Harry Coxhead dropped us a message to let us know his rods were on pre-order, that he’d been using the MK1’s for a number of years now and that he’d be more than happy to share with us his views and experiences on the new models, specifically how they compare to their predecessors.

Patience ensued, as the wait for the rods continued for a few weeks before Harry could lay his hands on them, having bought them largely on the faith of the brand, some limited tournament casting style videos and the knowledge that being made with more modern carbon there should be a weight saving if nothing else.

Once he got his hands on the rods, he immediately relayed to me the lighter feeling to hand. It’s important to note that the balance of a rod plays such a big part in this. I’ve heavier rods that feel lighter than weighed lighter ones purely because they are properly balanced. This being said, a subsequent weigh of the rod revealed they were 2.5oz (70g) lighter, though holding them, Harry and I both agreed that the weight saving felt even more substantial than this, particularly once a reel had been strapped on. This certainly suggested to us that the balance had been improved as well as out and out weight savings.

It would have been disappointing if there were not this sort of weight saving with much newer and improved materials, but the balance improvements were particularly reassuring that thought had been given to this new rod beyond remaking it with those improvements in material.

Looking at the rods side by side, the profile is largely indistinguishable. Even the curvature taken sitting within a strong ebbing tide showed very little difference to the naked eye. The understated but elegant looking standard build remains the same for these ‘red’ Pro range of rods. I’d paused for a second wondering why the livery of the predecessor did not say ‘MK1’, before slapping myself for such stupidity. The reference to MK2 is just about the only way you are going to identify the difference between these rods on the rack. That does pose a question of a risk of fraudulent second hand sales with amended livery, to which we’d recommend weighing any such rods and checking against published weights – though the MK2 should also come with a reducer and a much improved rod bag.

So what did Harry think of these rods in his first few sessions of use?

Harry’s first impression is that the new model loads with less effort, giving greater distance for less effort, which is pretty key in the majority of fishing situations where footing is unsure, and one cannot plant themselves to put everything into the cast. This is a staple of rods designed by Julian Shambrook, with his rods being designed to perform in fishing situations, not in perfect casting conditions in a field. Harry added that such a notable improvement surprised him, as the prior model always felt easy to load as it was.

Moving more to the end of the cast, Harry noted the improved recovery, again not something the first model lacked, but enough of an improvement in the second model to notice it. Harry added that it was still forgiving enough on a mistimed cast not to worry about needing shoulder surgery!

Despite this improved recovery, which can infer an extra stiffness to the rod, it still, as mentioned, sat rather equivalently in the tide, but, Harry comments, has much improved bite detection. Something that has been rather beneficial as the larger fish have yet to grace Harry with their presence since he purchased the new rods, but the bites of the smaller specimens have registered perfectly, whether using Turkana WKS mono, or Sakuma Nite Crystal. There would certainly be no issues with bite detection when using braid. 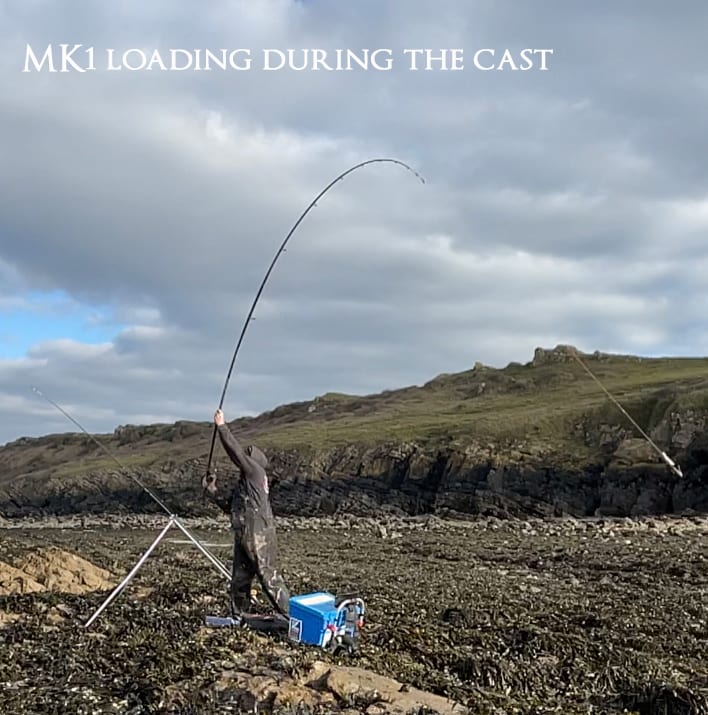 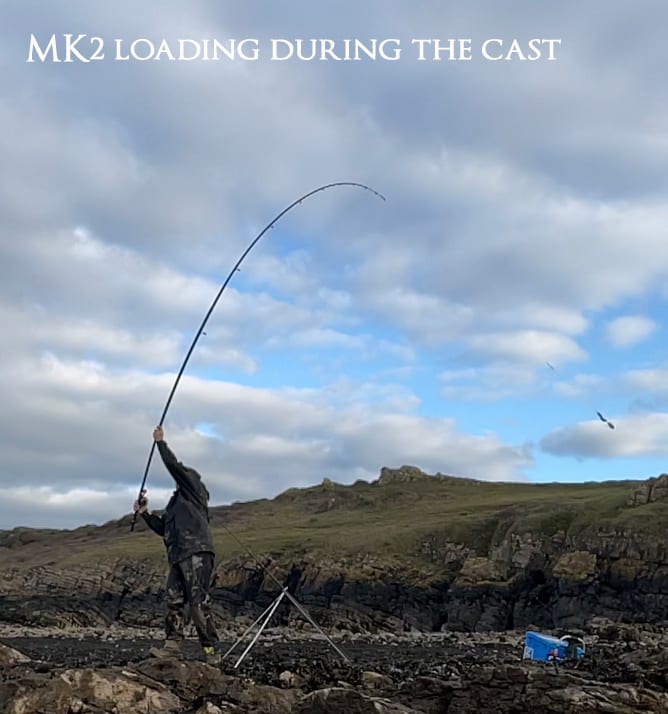 Tempering his views somewhat by the fact he has only been using the rod a matter of weeks, offering to give an update 6 months from now, Harry felt that whilst the MK1 was a great rod, and his primary choice for a number of years now, the MK2 feels like an immediate step up in quality across the board and quite possibly as close to perfect to a fishing rod for his requirements – largely mixed species Chesil based, as he can comprehend. With limited time to consider, he is not yet sure where he would improve the rod itself.

The reason we’ve said ‘the rod itself’, is Harry’s one small gripe is the new addition, the reducer. Whilst he would infrequently use one, he feels it seems cheap and heavy in comparison to the rod it is meant to accompany, being notably heavier than other brands of reducer he has used in the past.

Harry certainly feels his MK1’s will now be made redundant, such is the step up to the MK2, though as a reluctant seller of fishing tackle will probably be holding on to them for now regardless.

Being able to observe videos of Harry casting the MK1 and MK2, in a fishing situation, on uneven, slippery, muddy and weedy rocks, the slow motions videos substantiate each of his comments. The recovery is much crisper, the rod appears to load quicker and lower and he is able to come through the cast with a little bit more speed with less effort. We’ve included a slow motion video of each of the MK1 and MK2 below. Harry adds that on firmer footing, he gets much more into he rod, but it’s important to see how it will load in what for many of us, is a very typical fishing situation.

For more specifications on the rod, and to purchase, click here

Thank you Harry for sharing your experiences with us, along with he videos. We’re sure they will help others make a far more informed purchase. We look forward to hearing from you again when you’ve put them through 6 months of use.