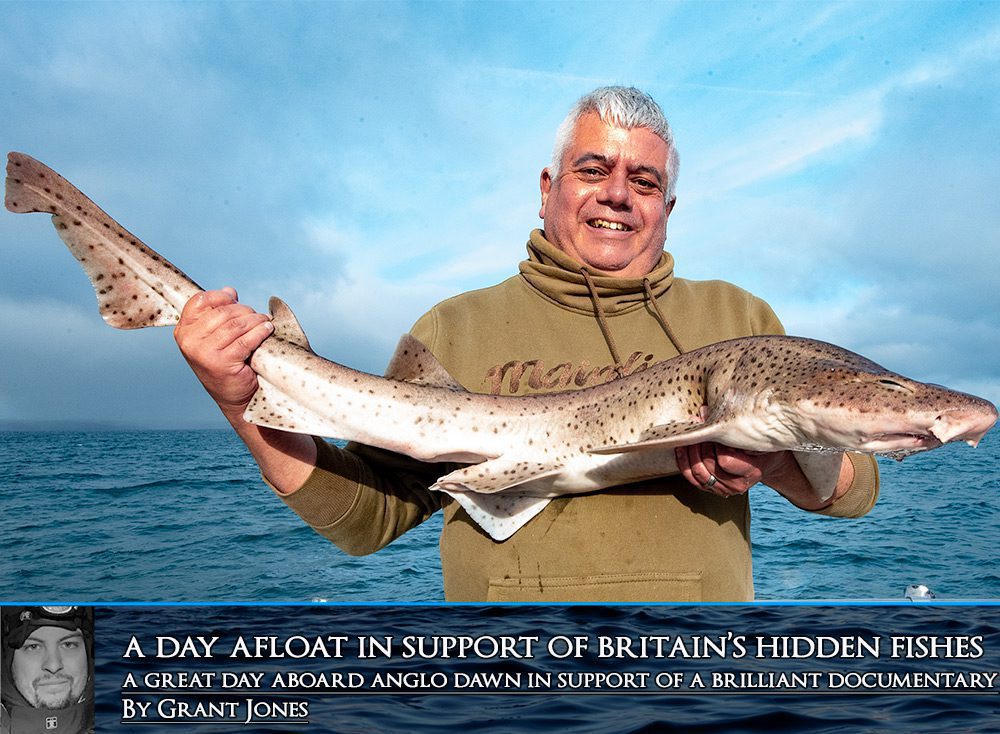 During the first half of the year, I had become aware of some fundraising efforts being undertaken by wildlife photographer Jack Perks, with a view to raising the necessary capital to produce a documentary entitled Britain’s hidden fishes. Knowing very little of the plans to start with, I was fortunate enough to speak with Jack and start to understand his plans and objectives for the exciting project. Whilst the documentary would not be a fishing film, instead focusing solely on the fish themselves, Jack is an angler and he caught my imagination with his plans.

The reality is that we need to do all we can to educate on the fish in and around the waters of the British Isles if we are to have any hope of saving them in the long run. Too many people are blissfully ignorant of the plight our waters are facing, from many fronts. Whether that be pollution into our rivers, overfishing or even re-stocking programmes, such as the introduction of seals to areas colonies have never previously resided, decimating local fish stocks in the process.

It is of course key that anglers are seen in the right light amongst this period of education too, which is why Hookpoint were only too glad to be a corporate partner for Jack Perks project, lending some assistance towards his aims. Despite this donation to his efforts, I still wondered if there were another way to raise additional much needed capital. Without further ado, I spoke to John Locker and a plan was hatched…

A number of places were auctioned off to join John and I aboard the brilliant Falmouth based charter boat Anglo Dawn for a day’s fishing. Ably supported by Penn, those succeeding in the auction would also walk away with a lovely new rod and reel set up appropriate to the fishing we intended to do on the day. Anglo Dawn skipper, Andy Howell, had also offered the charter up free of charge too, which we cannot thank him enough for.

John and I had no idea what to expect from the auction, being incredibly pleased to see it raise in excess of £2000 for the handful of places available! These were funds that ensured the project went ahead, and we are glad to report that Jack has already engaged in plenty of filming already this year, with a view to completing filming throughout 2022. I for one, cannot wait for the end result, which promises to show numerous species like we’ve never seen them on camera before, showing a range of unique and previously unrecorded behaviours!

As with many boat fishing sessions, the first scheduled date was blown off! I forget the name of the storm now, but it was a significant enough one to be named and we hastily got to arranging an alternative date to ensure it went ahead this year! Thus it was, at the back end of November, that Jon Butcher, Pete Kitchen and Kevin Turner would join John and I aboard Andy’s Anglo Dawn to hunt down some of Falmouth’s plentiful autumn fish.

The guys joining us had a mix of angling experience between them. It was safe to say that Jon Butcher had the least such experience on a sea faring boat, more familiar with the slightly friendlier conditions on the Norfolk Broads. A sense of enthusiasm and eagerness to learn was certainly not lacking from anyone, and we set our coarse out of the river in high spirits, explaining that the first job of the day would be to gather some fresh bait. Of course mackerel would be nice, but scad, poor cod, pouting and whiting would all be equally suitable for the targets of the day, being predominantly conger and ling on some inshore reefs with conditions a little too hairy to get out onto the wrecks we had intended to fish.

Whilst John busied himself preparing our rigs for the day’s main fishing in the wheel house, tying up his signature conger rigs that those familiar with the Fish Locker channel will no doubt have seen, I joined the others in hunting down some bait. Thankfully, the bait fish were obliging! Plenty of small to medium mackerel and scad came to the boat, along with some good size pouting and whiting, the occasional poor cod also snaffling itself on some feathers that made their way to the bottom without being intercepted beforehand. In no time at all, we were well stocked on bait to get us going, knowing we could also catch more over the reefs once fishing.

Whilst my primary ‘job’ of the day was to wield the camera, the guys were rapidly making their way through the baits bringing a succession of conger eels to the boat one after another. The snakes were in a good feeding mood this day, giving everyone plenty of rod bending action. A few fish were lost, along with some leads, as we showed Jon, Pete and Kevin how to coax the eels up quickly off the bottom before they could go to ground and snag any gear. Before long, even more eels were being brought boat side, the occasional one being allowed onboard for photos whilst the vast majority were quickly T-barred at the side. Thus with all this activity, the bait was soon needing a replenish and I took it upon myself to be chief bait angler for the boat.

It must be said, that the simple addition of a small muppet above the baited hooks was working wonders on the conger rigs! Whilst I can see the obvious advantages of large muppets protecting big baits from being washed out at depth, wrecking for big ling, the muppets John had used on his signature conger rigs were little more than a few inches. As such, the benefits seemed less apparent, until witnessing with my own eyes how the rare hook that went down without a muppet on remained largely ignored, with near instantaneous bites to the muppet rigs. It really was quite the eye opener.

Sat in the corner fishing for bait, with a sporting outfit of a Tenryu Bulldog and 5000 size Saragosa spinning reel, I enjoyed some good sport hooking into the occasional conger eel myself on baited feathers. Then I hit into something altogether a bit different. It had none of the weight of the conger, but was certainly more spirited than the bait fish I was targeting, giving a clear fight all the way to the top until it came into the last few feet and I could confidently declare ‘bream’ to the skipper. “Net! Net!” Called John. “Don’t lift it!” Shouted Andy.

What was all this commotion I wondered, declaring it was only a small couches, nothing to get so excited about… or so I thought. The general bream shape and red appearance had rushed my thoughts. Once the fish broke surface it sure seemed a strange looking couches and the reason for the excitement started to dawn on me. It wasn’t a couches after all, but a black spotted red sea bream, or just ‘red bream’ as it is most commonly referred to in these parts.

Safely netted, boated and weighed at 1lb 12oz, my bait fishing had returned a fish Anglo Dawn had not seen in 4 years. A once prominent species has recently become a scarcity. One could even say it is one of Britain’s hidden fish, many not knowing of its existence in our waters these days. Andy was quick to point out that where there’s one, there is more! Despite its relative small size next to the conger and ling that the others had been catching with considerable frequency, the opportunity for one of these bream was enticing, so a few more bream rods came out on rotation and everyone started to have a go. Unfortunately only two more smaller ones showed… unfortunately I had them both!

Though, red bream aside, the others were pulling in fish left, right and centre, and the star of the day was certainly our least experienced boat angler Jon Butcher. Whilst ticking off no end of ‘firsts’ throughout the day, he also achieved a good set of specimens to boot. Anyone would have been chuffed with his bull huss, comfortably in to double figures and a beautifully marked fish at the same time. The ling obliged for him, the conger started going up in size, he could do no wrong! Jon’s technique had improved massively throughout the day and I was kept busy on the baits as John Locker took care of constant T-bar duties.

Pete and Kevin had not been far behind either, and having all achieved the primary targets of ling and conger we discussed the option of a final hour on another bream species showing a recent renaissance in the area, the black bream. These hard fighting fish are wonderful to catch, and offered a chance of a new species to a couple of the anglers too.

It wasn’t a surprise when Jon Butcher connected with a black bream! Everything he touched turned to gold that day! I really should have had him put on my lottery numbers before we left! John Locker also managed one to the boat in a rare bit of fishing himself that day, where he was otherwise too busy tying rigs or unhooking others fish. Just as we were looking to call it quits, a flurry of bream also saw Kevin join in on the action, pleased to land his first of the species.

As we headed back to shore, Andy ensuring I detached myself from a lovely rod and reel set up of his I’d become very fond of that afternoon… we were all in even better spirits than when we’d departed that morning. The fish had obliged, the banter between a group of anglers who had never met before had been fantastic and talk of scheduling another trip together had already begun! All in all, a highly successful day of fishing that went so far to helping Jack Perk’s project get off the ground, which in turn could do wonders for protecting our prized fish in years to come.

Thank you once again to our winning bidders, Penn for supplying the rod and reel outfits, Andy for the charter and John Locker for his company, crew work and excellent rig tying skills. We’ll bring you further updates on how “Britain’s Hidden Fishes’ progresses over the next year.